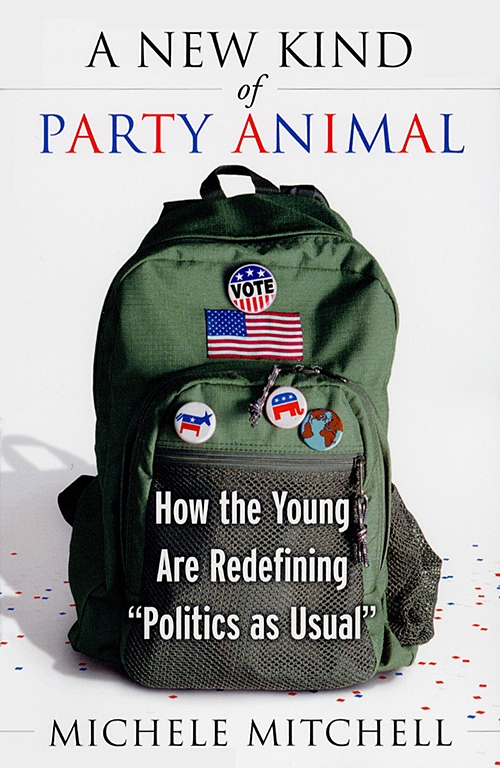 A New Kind of Party Animal

How the Young Are Redefining "Politics as Usual"

In this provocative and timely book, twenty-seven-year-old political correspondent Michele Mitchell explores how the younger generation, contrary to popular opinion, is redefining politics. It is the multimillion-dollar question asked by marketing strategists, political pundits, and older Americans: Who are these people and where will they lead us?
It's an eighty-million-strong group that includes trust fund babies and welfare kids, from Daughters of the American Revolution to descendants of slaves and new immigrants, found from Berkeley to the Bible Belt, raised by both parents or single or divorced parents. It's a group connected through the technology they created. It's a group that now says "show me" when offered a promise.
Mitchell explores six factors that not only set this generation apart but are transforming the political world: lack of party affiliation, diverse interest in a range of issues, grassroots-based approaches to problem solving, lack of gender bias, skepticism of marketing and advertising, and computer savvy. Insightful, succinct, and engaging, A New Kind of Party Animal is our road map to understanding the future of American society and politics.

Clarence Page Chicago Tribune If you think of today's young voters as apathetic slackers who don't care about their political futures, this book is here to set you straight. Michele Mitchell explodes the stereotypes to take us inside the generation that will inherit the leadership of the next century. Read it and be amazed, even as you are amused.

Natasha Stovall The Village Voice [Mitchell] is a gifted writer, and her descriptions often shimmer.

Jonathan Yardley The Washington Post [Mitchell] makes useful points: that older people have always belittled the political interests and commitment of the young, that there is a far stronger political community within Generation X than is generally acknowledged and -- this is perhaps most important -- that rather than automatically allying themselves with the major parties, the young are "hesitant to embrace a single ideology" and often describe themselves as "independent."

Jennifer Nix On the Issues A New Kind of Party Animal is an intelligent, even inspirational, opening salvo in what could result in further discussions of the many true and diverse states of young political minds and where they will lead us in the next century. A New Kind of Party Animal goes to the heart of common misconceptions, proving that 18-35s do vote and do get involved.

Tanya Melich author of The Republican War Against Women If you believe that young Americans are disengaged from public service, Michele Mitchell will prove you wrong. Her feisty book is a splendid addition to the political debate, illustrating that her generation is, indeed, revitalizing our dismal politics.

Tom Brazaitis Washington Bureau Chief, The Plain Dealer (Cleveland) and coauthor of War without Bloodshed: The Art of Politics On just about every page, Michele Mitchell deftly punctures another stereotype about her generation. Political operatives, the press, and the public will learn a lot in these pages about the attitudes and motivation of the young men and women who will shape the first part of the twenty-first century in America.

A New Kind of Party Animal

How the Young Are Redefining "Politics as Usual"