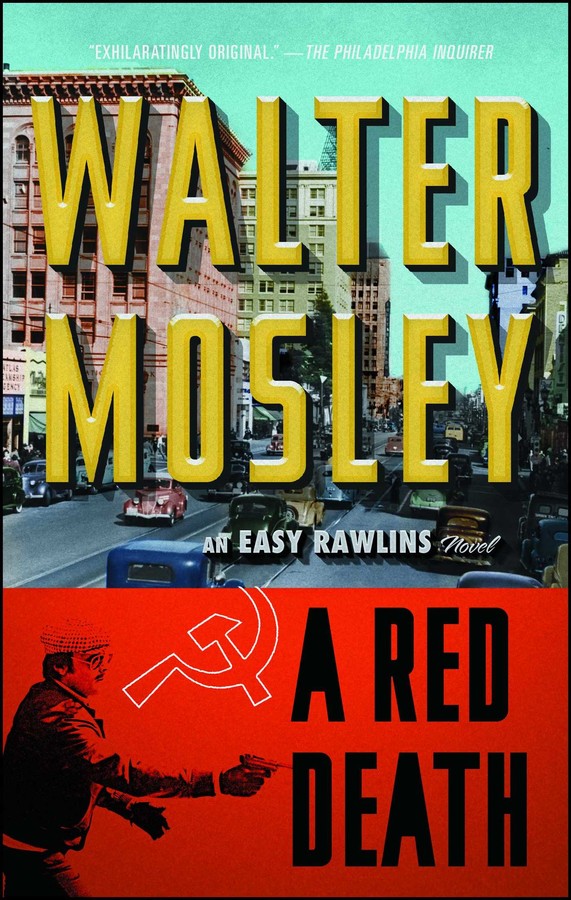 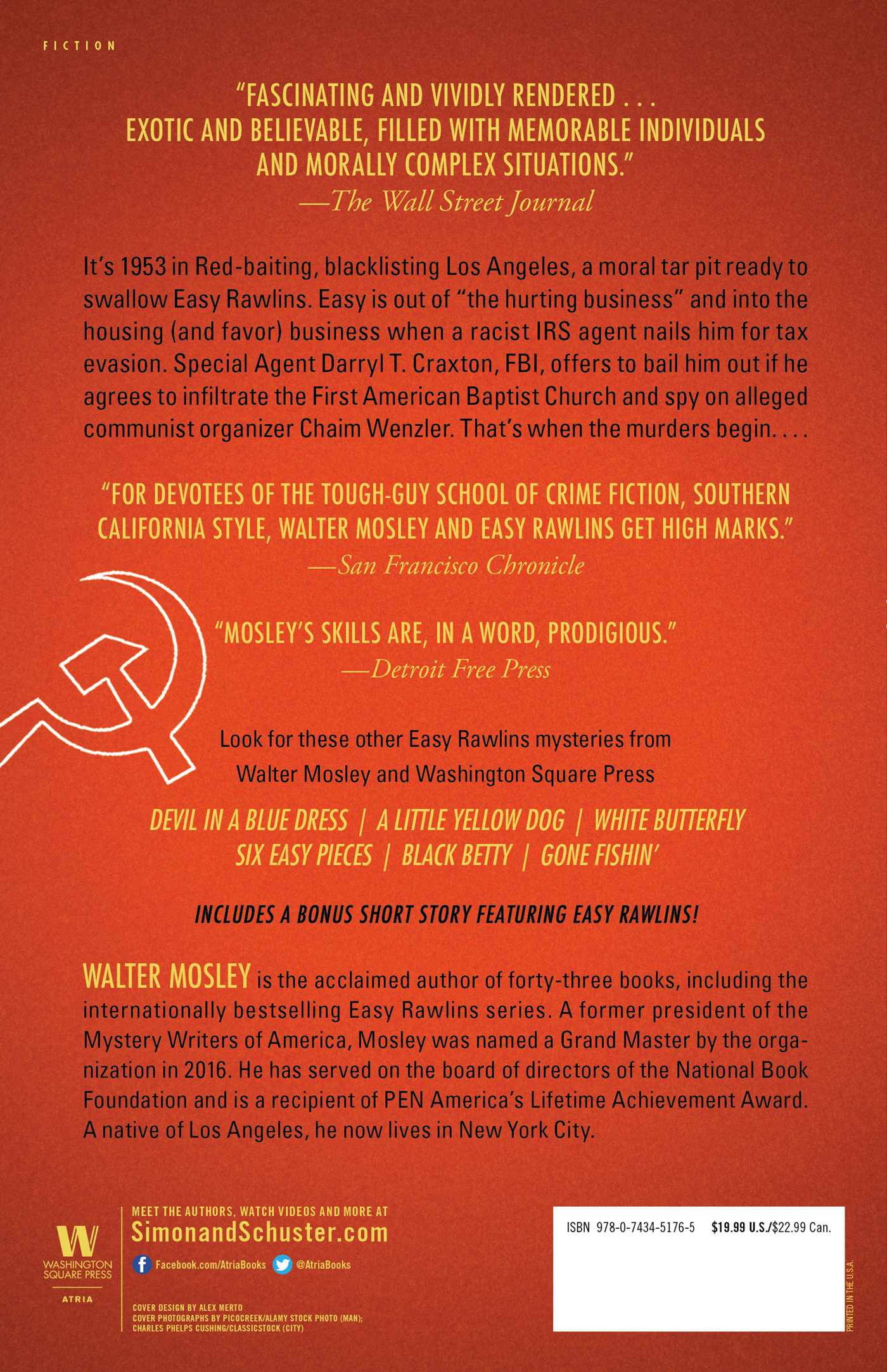 It’s 1953 in Red-baiting, blacklisting Los Angeles—a moral tar pit ready to swallow Easy Rawlins. Easy is out of the hurting business and into the housing (and favor) business when a racist IRS agent nails him for tax evasion. Special Agent Darryl T. Craxton, FBI, offers to bail him out if he agrees to infiltrate the First American Baptist Church and spy on alleged communist organizer Chaim Wenzler. That’s when the murders begin....


I always started sweeping on the top floor of the Magnolia Street apartments. It was a three-story pink stucco building between Ninety-first Street and Ninety-first Place, just about a mile outside of Watts proper. Twelve units. All occupied for that month. I had just gathered the dirt into a neat pile when I heard Mofass drive up in his new '53 Pontiac. I knew it was him because there was something wrong with the transmission, you could hear its high singing from a block away. I heard his door slam and his loud hello to Mrs. Trajillo, who always sat at her window on the first floor?best burglar alarm you could have.

I knew that Mofass collected the late rent on the second Thursday of the month; that's why I chose that particular Thursday to clean. I had money and the law on my mind, and Mofass was the only man I knew who might be able to set me straight.

I wasn't the only one to hear the Pontiac.

She was a tall young woman with yellowish eyes and thick, slack lips.

"Hi, Easy," she drawled in the saddest high voice. She was a natural tenor but she screwed her voice higher to make me feel sorry for her.

All I felt was sick. The open door let the stink of incense from her prayer altar flow out across my newly swept hall.

"Poinsettia," I replied, then I turned quickly away as if my sweeping might escape if I didn't move to catch it.

"I heard Mofass down there," she said. "You hear him?"

She opened the door and draped her emaciated body against the jamb. The nightcoat was stretched taut across her chest. Even though Poinsettia had gotten terribly thin after her accident, she still had a large frame.

"I gotta talk to him, Easy. You know I been so sick that I cain't even walk down there. Maybe you could go on down an tell'im that I need t'talk."

"He collectin' the late rent, Poinsettia. If you ain't paid him all you gotta do is wait. He'll be up here soon enough to talk to you."

"You better tell'im that," I said. It didn't mean anything, I just wanted to say the last word and get down to work on the second floor.

"Could you talk to him, Easy? Couldn't you tell'im how sick I am?"

"He know how sick you are, Poinsettia. All he gotta do is look at you and he could tell that. But you know Mofass is business. He wants that rent."

"But maybe you could tell him about me, Easy."

She smiled at me. It was the kind of smile that once made men want to go out of their way. But Poinsettia's fine skin had slackened and she smelled like an old woman, even with the incense and perfume. Instead of wanting to help her I just wanted to get away.

She hadn't paid a penny in four months already, but it wouldn't have been smart for me to say that to her.

"Lemme talk to 'im later, Poinsettia. He'd just get mad if I stopped him on the steps."

"Go to 'im now, Easy. I hear him coming." She pulled at her robe with frantic fingers.

I could hear him too. Three loud knocks on a door, probably unit B, and then, in his deep voice, "Rent!"

"I'll go on down," I said to Poinsettia's ashen toes.

I pushed the dirt into my long-handled dustpan and made my way down to the second floor, sweeping off each stair as I went. I had just started gathering the dirt into a pile when Mofass came struggling up the stairs.

He'd lean forward to grab the railing, then pull himself up the stairs, hugging and wheezing like an old bulldog.

Mofass looked like an old bulldog too; a bulldog in a three-piece brown suit. He was fat but powerfully built, with low sloping shoulders and thick arms. He always had a cigar in his mouth or between his broad fingers. His color was dark brown but bright, as if a powerful lamp shone just below his skin.

"Mr. Rawlins," Mofass said to me. He made sure to be respectful when talking to anyone. Even if I actually had been his cleanup man he would have called me mister.

"Mofass," I said back. That was the only name he let anyone call him. "I need to discuss something with you after I finish here. Maybe we could go somewhere and have some lunch."

"Suits me," he said, clamping down on his cigar.

He grabbed the rail to the third floor and began to pull himself up there.

I went back to my work and worry.

Each floor of the Magnolia Street building had a short hallway with two apartments on either side. At the far end was a large window that let in the morning sun. That's why I fell in love with the place. The morning sun shone in, warming up the cold concrete floors and brightening the first part of your day. Sometimes I'd go there even when there was no work to be done. Mrs. Trajillo would stop me at the front door and ask, "Something wrong with the plumbing, Mr. Rawlins?" And I'd tell her that Mofass had me checking on the roof or that Lily Brown had seen a mouse a few weeks back and I was checking the traps. It was always best if I said something about a rodent or bugs, because Mrs. Trajillo was a sensitive woman who couldn't stand the idea of anything crawling down around the level of her feet.

Then I'd go upstairs and stand in the window, looking down into the street. Sometimes I'd stand there for an hour and more, watching the cars and clouds making their ways. There was a peaceful feeling about the streets of Los Angeles in those days.

Everybody on the second floor had a job, so I could sit around the halls all morning and nobody would bother me.

But that was all over. Just one letter from the government had ended my good life.

Everybody thought I was the handyman and that Mofass collected the rent for some white lady downtown. I owned three buildings, the Magnolia Street place being the largest, and a small house on 116th Street. All I had to do was the maintenance work, which I liked because whenever you hired somebody to work for you they always took too long and charged too much. And when I wasn't doing that I could do my little private job.

On top of real estate I was in the business of favors. I'd do something for somebody, like find a missing husband or figure out who's been breaking into so-and-so's store, and then maybe they could do me a good turn one day. It was a real country way of doing business. At that time almost everybody in my neighborhood had come from the country around southern Texas and Louisiana.

People would come to me if they had serious trouble but couldn't go to the police. Maybe somebody stole their money or their illegally registered car. Maybe they worried about their daughter's company or a wayward son. I settled disputes that would have otherwise come to bloodshed. I had a reputation for fairness and the strength of my convictions among the poor. Ninety-nine out of a hundred black folk were poor back then, so my reputation went quite a way.

I wasn't on anybody's payroll, and even though the rent was never steady, I still had enough money for food and liquor.

"What you mean, not today?" Mofass's deep voice echoed down the stairs. After that came the strained cries of Poinsettia.

"I know you ain't got it, that's why I'm here. This ain't my reg'lar collectin' day, ya know. I come to tell you folks that don't pay up, the gravy train is busted."

"Lissen here." His voice dropped a little. "This is my job. My money comes from the rent I collect fo' Mrs. Davenport. You see, I bring her a stack'a money from her buildin's and then she counts it. And when she finishes countin' she takes out my little piece. Now when I bring her more money I get more, and when I bring in less..."

A few moments later I could hear him coming down the stairs.

"I be back on Saturday, and if you ain't got the money then you better be gone!" he shouted.

"You can go to hell!" Poinsettia cried in a strong tenor voice. "You shitty-assed bastard! I'ma call Willie on yo' black ass. He know all about you! Willie chew yo' shitty ass off!"

Mofass came down the stair holding on to the rail. He was walking slowly amid the curses and screams. I wondered if he even heard them.

"Are you ready to leave, Mr. Rawlins?" he asked me.

"I got the first floor yet."

"I'll be out in the car then. Take your time." Mofass waved his cigar in the air, leaving a peaceful trail of blue smoke.

When the front door on the first floor closed, Poinsettia stopped shouting and slammed her own door. Everything was quiet again. The sun was still warming the concrete floor and everything was as beautiful as always.

But it wasn't going to last long. Soon Poinsettia would be in the street and I'd have the morning sun in my jail cell. 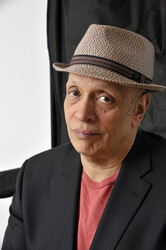 Walter Mosley is the acclaimed author of forty-three books, including the internationally bestselling Easy Rawlins series. His best known Easy Rawlins novels include Devil in a Blue Dress, A Red Death, White Butterfly, Black Betty, and Little Yellow Dog. He is also the author of the collection of stories Always Outnumbered. Always Outgunned featuring Socrates Fortlow, which was the basis for an HBO feature film. A former president of the Mystery Writers of America, he was named a grand master by the organization in 2016. He has served on the board of directors of the National Book Foundation and is a recipient of the PEN American Center Lifetime Achievement Award. A native of Los Angeles, he now lives in New York City.

"The thriller or detective story, raised to a higher level...action, suspense, a well-crafted plot...fast-moving [and] enjoyable."

"This is a master at work: we would be well advised to seek everything Walter Mosley writes."

"A Red Death is a straightforward, cleanly nasty treat. The writing is funky and knowing, with a no-fools cast."

"Mosley...is here to stay and not to be missed."