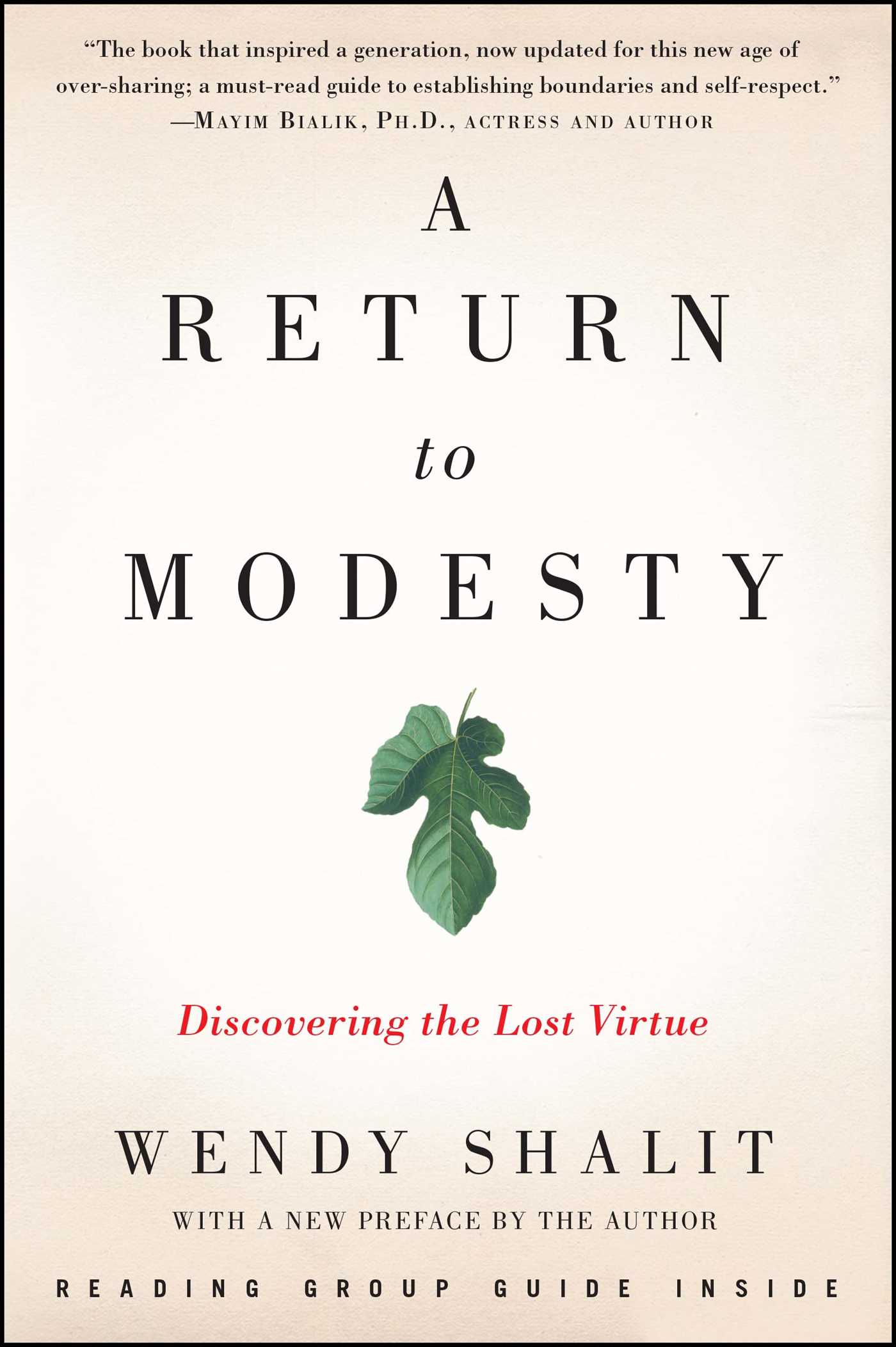 A Return to Modesty

Revised and updated, this fifteenth anniversary edition of A Return to Modesty reignites Wendy Shalit’s controversial claim that we have lost our respect for an essential virtue: modesty.

When A Return to Modesty was first published in 1999, its argument launched a worldwide discussion about the possibility of innocence and romantic idealism. Wendy Shalit was the first to systematically critique the “hook-up” scene and outline the harms of making sexuality so public.

Today, with social media increasingly blurring the line between public and private life, and with child exploitation on the rise, the concept of modesty is more relevant than ever. Updated with a new preface that addresses the unique problems facing society now, A Return to Modesty shows why “the lost virtue” of modesty is not a hang-up that we should set out to cure, but rather a wonderful instinct to be celebrated.

A Return to Modesty is a deeply personal account as well as a fascinating intellectual exploration into everything from seventeenth-century manners to the 1948 tune “Baby, It’s Cold Outside.” Beholden neither to social conservatives nor to feminists, Shalit reminds us that modesty is not prudery, but a natural instinct—and one that may be able to save us from ourselves.

A Return To Modesty: Discovering the Lost Virtue by Wendy Shalit is a fascinating and provocative exploration of the flip side of the sexual revolution, a world in which young women are forced to feel shame for their sexual inexperience and romantic longings. Shalit is a fresh new voice who courageously challenges many of the basic assumptions of modern American society and the relations between men and women.
Discussion Questions
1. How does Wendy Shalit define modesty? Do you agree or disagree with her definition? How is modesty different from prudery? What does modesty mean to you?
2. Do you think our society values modesty? What about civility?
3. The author links early sex education with the increased demystification of sex. At what age do you think children should be introduced to the topic of sex? Should parents supply their children with birth control options when they reach puberty? What, if any, effect has sex education had on your own views about sex?
4. Do you agree with David Hume that the risk of pregnancy makes women sexually more vulnerable? If so, wouldn't the Pill take care of that vulnerability? Or are women more sexually vulnerable for other reasons?
5. Does one have to be sexually adventurous to be fully liberated? To be mature?
6. What is the role of imagination and mystery in love and desire?
7. Wendy Shalit states that "in a society that respected the power of female modesty, the men were motivated to do what women wanted." Do you agree or disagree with this statement? Why?
8. Do you think Simone de Beauvoir was right to predict that a society which doesn't appreciate modesty will be one with more violence against women?
9. Modesty in dress is an important issue in the book and the author gives evidence that women who dress modestly earn more respect from men. She also writes about a young Muslim woman who gave up her veil because men found it too alluring and provocative. What do these examples say about the origins of modesty? Do you believe modesty is natural or socially constructed?
10. The author frequently looks to the past -- from the 1950s to as far back as the 3rd century B.C. -- to define a standard of modesty for today. What historical trends and events come to mind when you think of the evolution of modesty?
11. Wendy Shalit says that she wrote this book in part because modesty cannot be a private virtue in an immodest world. What do you think she means by this? Do you agree or disagree?
12. Do men play a role in helping women maintain their modesty? How do women encourage modest behavior on the part of men? What do you think of the author's views about the relationship between the sexes?
13. Using her grandparents as an example, the author calls for a return to traditional courtship rituals. What would be the benefits and disadvantages of reintroducing these rituals into modern society? Which traditional and modern rituals do you feel strongly about?
14. Does equality mean that men and women must behave the same?
15. How do your personal experience relate to Wendy Shalit's argument? How do you feel about unisex bathrooms? The role of pornography in our society? The role of the media in the evolution of modesty?
Wendy Shalit

Wendy Shalit began to write A Return to Modesty as an undergrad at Williams College, where she received her BA in philosophy. She is also the author of The Good Girl Revolution and her essays on literary and cultural topics have appeared in The Wall Street Journal, The New York Times, and other publications. Now that she is the mother of three lively and opinionated children, she is more modest and humbled than ever before.

"Wendy Shalit’s first book, A Return to Modesty. . . created a storm when it was published nine years ago…As a veteran of pro-sex feminism who still endorses pornography and prostitution, I say more power to all these chaste young women who are defending their individuality and defying groupthink and social convention. That is true feminism!"

"Her book has touched a nerve in a society overdosed on sex...Shalit defends...compellingly, shame, privacy, gallantry, and sexual reticence"

"Ms. Shalit marshals impressive evidence from philosophers as well as the tabloids to make her case for a return to modesty -- as both a sexual ideal and a strategy for greater pleasure...[a] serious yet bouncy study"

"A Return to Modesty provides one invaluable service. There is a growing body of scholarly research on young adulthood that may, in the aftermath of Shalit's booming polemic, be more difficult to ignore."

"The book of the moment...makes a compelling case for the idea that the sexual revolution hasn't been entirely good for either women or men...Social workers, health professionals and others who bemoan the loss of "boundaries" in the lives of troubled girls will find a hopeful message in the book"

"The first book of its kind...to blaze down the center of the postfeminist battleground between left and right."

"[An] earnest and serious book....A fascinating subject [brought] to our attention in a fresh way."

"A Return to Modesty is...so uncompromising in voice and stance that one is tempted to think of its author as Simone de Shalit or Wendy Wollstonecraft, but make no mistake: she imitates nothing and no one...Every page of this book [is] wise, fresh, and funny, sparkling with her special brand of astringent charm"

A Return to Modesty