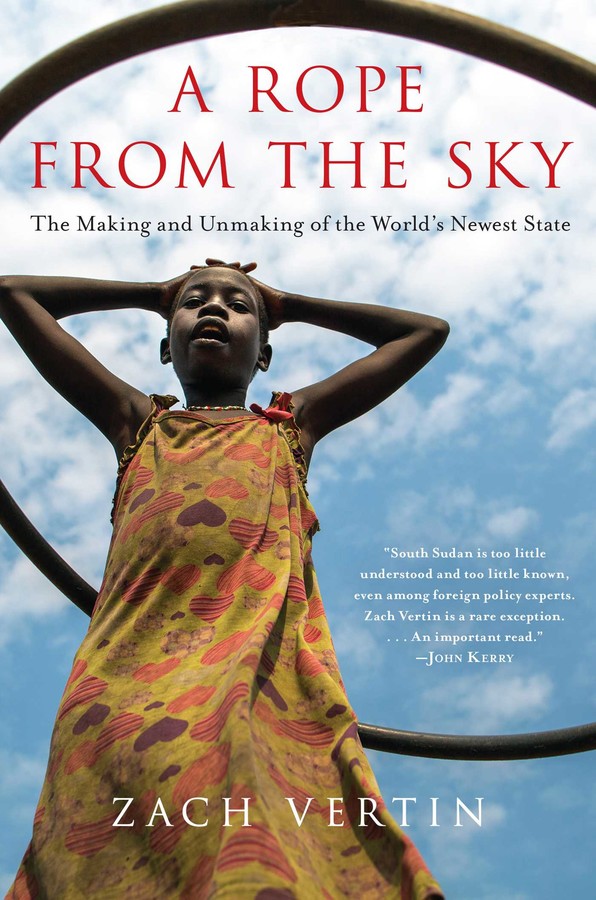 A Rope from the Sky

The Making and Unmaking of the World's Newest State

The untold story of America's attempt to forge a nation from scratch, from europhric birth to heart-wrenching collapse.

South Sudan's independence was celebrated around the world—a triumph for global justice and an end to one of the world's most devastating wars.  But the party would not last long: South Sudan's freedom fighters soon plunged their new nation into chaos, shattering the promise of liberation and exposing the hubris of their foreign backers.

Chronicling extraordinary stories of hope, identity, and survival, A Rope from the Sky journeys inside an epic tale of paradise won and then lost. This character-driven narrative is first a story of power, promise, greed, compassion, violence, and redemption from the world's most neglected patch of territory.  But it is also a story about the best and worst of America—both its big-hearted ideals and its difficult reckoning with the limits of American power amid a changing global landscape.

Zach's Vertin's firsthand acounts, from deadly war zones to the halls of Washington power, brings readers inside this remarkable episode—an unprecedented experiment in state-building and a cautionary tale.  It is brilliant and breathtaking, a moder-day Greek tragedy that will challenge our perspectives on global politics.

Zach Vertin is an American writer, foreign policy expert, and former diplomat; he has spent the last twelve years working in international peace and conflict issues, not least in South Sudan. He is currently a Lecturer at Princeton University and a Visiting Fellow at the Brookings Institution's Doha Center. He previously served in the Obama Administration as a Senior Adviser to the U.S. Special Envoy to Sudan and Sudan South Sudan, and prior to that he was a Senior Analyst for the International Crisis Group. He has written or commented for: the New York Times, Washington Post, Wall Street Journal, Financial Times, Foreign Affairs, the Economist, the Atlantic, CNN, the BBC, and more. He lives in Washington, D.C.

"Vertin’s long experience in and deep commitment to South Sudan made him one of the best analysts there. A Rope from the Sky is a testament to his seriousness, sense of purpose, and focus."

"The still-unfolding tragedy of South Sudan is too little understood and too little known, even among foreign policy experts. Zach Vertin is a rare exception. He has spent his life not just explaining how the promise of this young nation, for which so many sacrificed, was broken so badly, but helping end the bloodshed for a people who have seen far too much of it.  An important read."

– John Kerry, 68th U.S. Secretary of State, author of EVERY DAY IS EXTRA

"An engrossingly written account. A Rope from the Sky is an essential guide to one of the world's most intractable conflicts—a must-read for warriors, diplomats, relief experts, and would-be peace negotiators anywhere in the world."

"Ponders the extent of Western responsibility in the making—and breaking—of South Sudan…[and] points to a deeper question: what makes a nation?  Vertin wonders whether, like the American Civil War, South Sudan’s misery will ‘ultimately prove an awful but formative part of its becoming a viable state."

"Panoramic and absorbing. A masterful account of the birth and near-death of a nation.  Vertin seams together a staggeringly complicated puzzle, re-creating the savage street battles and high-level diplomacy that has informed South. But much of the book’s texture comes from beautiful portraits of the South Sudanese people. An invaluable contribution."

"A political roller coaster from Africa to the White House and back. Zach Vertin guides us through South Sudan’s euphoric independence and its devastating descent into war. A compelling read. "

A brilliant, authoritative, and colorful insight into the hope and despair that is the world’s youngest country. Unique in modern history, this untold story of South Sudan’s birth carries lessons not just for Africa but for the rest of the world.

"Vertin, a former NGO analyst and adviser to the U.S. special envoy to Sudan and South Sudan, brings an insider’s knowledge to this gripping, well-written account of South Sudan."

"A highly readable, well-informed and people-centered account.  Essential reading for anyone seeking to understand why South Sudan has unraveled."

"Zach Vertin had a front row seat. With a journalist’s verve he takes us through the cast of characters—and forces—which put this country together and then tragically combined to dismantle it. This is a tale of leaders’ illusions and of a terrible violence consequently unleashed. And it’s a story that has not been properly told till now."

"A remarkably authoritative account of South Sudan’s rise and fall; Zach Vertin matches expert political analysis with a journalist’s knack for storytelling, and the result is an exciting and immersive book that will be read for years come. He was present at the creation, and could not be better suited to tell this story."

"A keen observer of the unfolding South Sudan crisis and participant in the peace effort chronicles the making of the fledgling state and its subsequent disintegration. Vertin displays enormous affection and concern for the fate of this fragile new state. Despite daunting challenges facing the new nation, Vertin offers hope that a viable state can prevail."

"A superb read.  Zach Vertin skillfully unpacks the events that gave rise to a nation and then hastened its tragic unravelling. It is at once a story that echoes with the experience and hopes of the South Sudanese people, and a chronicle of one of the most consequential attempts at state-building in the modern era. No matter where we seek to advance the cause of peace and justice in the world, we would be wise to learn from this important book."

"Vertin offers unprecedented access to the full story...A vitally important, expert account of the little-understood founding of a struggling nation."

"A hugely important contribution to the debate about one of Africa's longest running tragedies."

Vertin’s long experience in and deep commitment to South Sudan made him one of the best analysts there.  A testament to his seriousness, sense of purpose, and focus. His is a rare record of how humanitarian goals can be communicated.

A Rope from the Sky

The Making and Unmaking of the World's Newest State