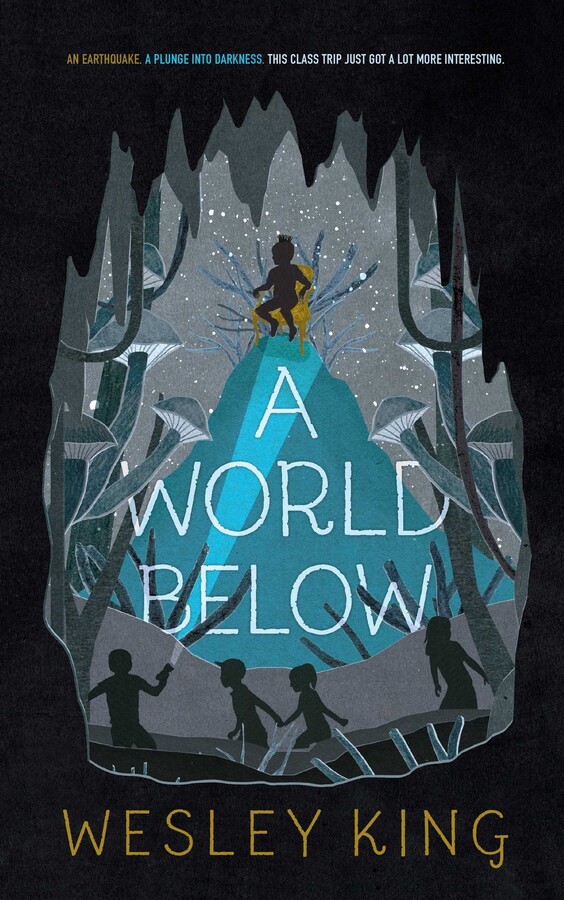 “A swift-paced survival tale that’s a cool blend of Lord of the Flies and Journey to the Center of the Earth.” —School Library Journal
“A sharp meditation on the seemingly universal difficulties of being young, smart, and uncertain.” —BCCB
“A multifaceted journey from darkness to light.” —Kirkus Reviews

A class field trips turns into an underground quest for survival in the latest middle grade novel from the author of Edgar Award winner OCDaniel.

Mr. Baker’s eighth grade class thought they were in for a normal field trip to Carlsbad Caverns in New Mexico. But when an earthquake hits, their field trip takes a terrifying turn. The students are plunged into an underground lake…and their teacher goes missing.

They have no choice but to try and make their way back above ground, even though no one can agree on the best course of action. The darkness brings out everyone’s true self. Supplies dwindle and tensions mount. Pretty and popular Silvia does everything she can to hide her panic attacks, even as she tries to step up and be a leader. But the longer she’s underground, the more frequent and debilitating they become. Meanwhile, Eric has always been a social no one, preferring to sit at the back of the class and spend evenings alone. Now, he finds himself separated from his class, totally by himself underground. That is, until he meets an unexpected stranger.

Told from three different points of view, this fast-paced adventure novel explores how group dynamics change under dire circumstances. Do the students of Mr. Baker’s class really know each other at all? Or do they just think they do? It turns out, it’s hard to hide in the dark.

A World Below Twenty Minutes Before
THE BOY SAT ON A throne made of mushroom stalks and branches, slung together in an arching, triangular shape and lashed tight with vines. Thorns and brambles had been missed in the soldiers’ haste, and now they dug into his legs and back, pinching and twisting and sharp.

But the boy did not flinch. He was as motionless as the throne he sat upon.

The boy had dark hair that spilled down his face in dry, knotted clumps, reaching his shoulders. He was thin but muscular, with the narrow jaw of a thirteen-year-old protruding below pale, thin lips and black eyes. He was still considered a boy, even there in the unforgiving dark. But this boy was the King, and there was a judgment to be made.

His soldiers brought the offender before him, dragging the frantic child by two skinny arms. The edge of the Ghost Woods stood behind the King, the towering white and crimson fungi and gnarled barbar trees watched the scene impassively. The chamber was deathly still.

The offender was even younger than the King—as pale as the mushrooms and stained with dirt and fresh blood from a cut above his right eyebrow. His hair was long and unruly as well, hanging down past his shoulders and tangled with snake vines—it looked as if they might have grown from his skull. He was ten or eleven years old, but his eyes were hard and seething with hatred. The sight of them made the King stir.

“The Worm,” Captain Salez said solemnly, taking up his post beside the King.

“What is his crime?” the King murmured.

The King clasped his trembling hands in his lap to still them.

The haphazard throne had been built on the border of the woods just an hour earlier by his men. They had been hunting for a Night Rat when the cries had gone up: A Worm had been found hunting on the King’s Land. The King knew the crime. He also knew the punishment.

But there were formalities to follow. All offenders were to be tried by the King.

Captain Salez straightened. “This Worm was discovered skinning a freshly dead Night Rat on your land, my King. The boy’s spear was still lodged in its torso when discovered. The Worm then tried to flee and harmed one of your soldiers in the process.”

The King nodded slowly. He wished his father were here, but he was long dead now. Sometimes he imagined that his father was sitting beside him, hard as stone, passing judgment. The boy knew what his words would be: The Law is paramount. It must be death.

“Do you have anything to say in your defense, Worm?” the boy King asked.

The young Worm looked up at him, his lip twisting. “I have committed no crime.”

He was thin, but wiry and strong for his age. He would have been a good soldier.

“You have heard the charges,” the King said, frowning at the boy’s impertinence.

The King’s attending soldiers—twenty strong and armed with sword and spear and jagged knife—stiffened at the comment. The boy shouldn’t have mentioned Jana. There was no name more hated in the entire Midnight Realm than hers—the one who had plunged them into war and who now called herself the Shadow Queen, a blatant challenge to the King.

The boy would suffer now, if his soldiers had their way.

The King studied the Worm thoughtfully. The boys’ ribs were visible above a roughly sewn loincloth of rat hide and yew leaves. His gaunt cheeks seemed sickly and alien, buried beneath grime, and yet he looked much the same as the King and his soldiers. Of course he did.

“What is your name?” the King asked.

“Yes,” he replied, looking offended. “I need no help to hunt.”

“Do you know the sentence for trespassing on the King’s Land?” the King asked.

The boy finally turned his proud eyes down. His knees were shaking now. “Yes.”

The King sat back in his throne, feeling the jagged thorns poking into his flesh. It was an easy decision, in truth, but it didn’t feel like one. Nennez looked like the younger brother he had never had—they might have grown up together in the Hall, stalking roaches. He had done nothing wrong but try to feed himself. Did he truly deserve death?

“The Law is clear,” Captain Salez said, as if sensing the King’s doubts.

The King just stared at Nennez. “If you were spared, what would you do?”

The soldiers all looked at their King, uncomprehending.

Nennez seemed equally stunned. “I . . . I would go back to my people.”

“Will you stay off my land?” the King asked softly.

The boy’s bottom lip was moving now, quivering like a fish on the line. “Yes.”

The King paused. It was unfathomable to let a Worm go for trespassing. But he was already tired of passing death on Worms. Two had gone to death on his orders.

“Go. Tell Jana to keep your people away. And try to be—”

He didn’t get a chance to finish. Suddenly the Earth shook like a writhing animal in a net, casting the King from his throne. The cave came alive with screams and panic as the sound of cracking, splintering stone filled the air. Nennez took off in a flash, using the panic to his advantage, and the King felt Captain Salez’s strong hands heaving him to his feet.

“Get back to the village!” Captain Salez shouted, waving at the other soldiers.

Captain Salez dragged the King toward the tunnels, shielding the boy’s head from the falling rocks. The last thing the King saw was Nennez vanish into the darkness, and he wondered if the Mother had decided to punish them all for his mercy.

He could almost see his father walking behind him now, a cold expression on his face. Weakness will be punished, he said sharply. There can be no weak Midnight King.

Captain Salez pulled the King back into the tunnel, and his father disappeared.

I am sorry, Father. I will be strong. I will not break the Law again.
Wesley King

Wesley King is the author of the Edgar Award–winning OCDaniel, which Booklist praised as “complex and satisfying” in a starred review. It was named a Bank Street Best Book of the Year and received Canada’s Silver Birch Award. Its companion, Sara and the Search for Normal, received a starred review from School Library Journal.  King’s first middle grade novel, The Incredible Space Raiders from Space!, was called “a well-drafted coming-of-age story” by Publishers Weekly. King is also the author of Kobe Bryant’s New York Times bestselling Wizenard series. He lives in Nova Scotia.