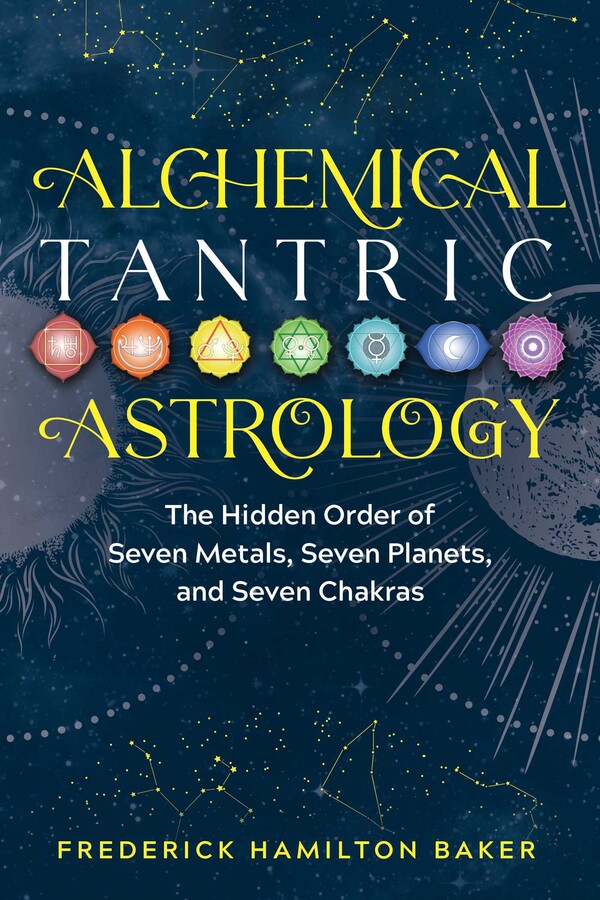 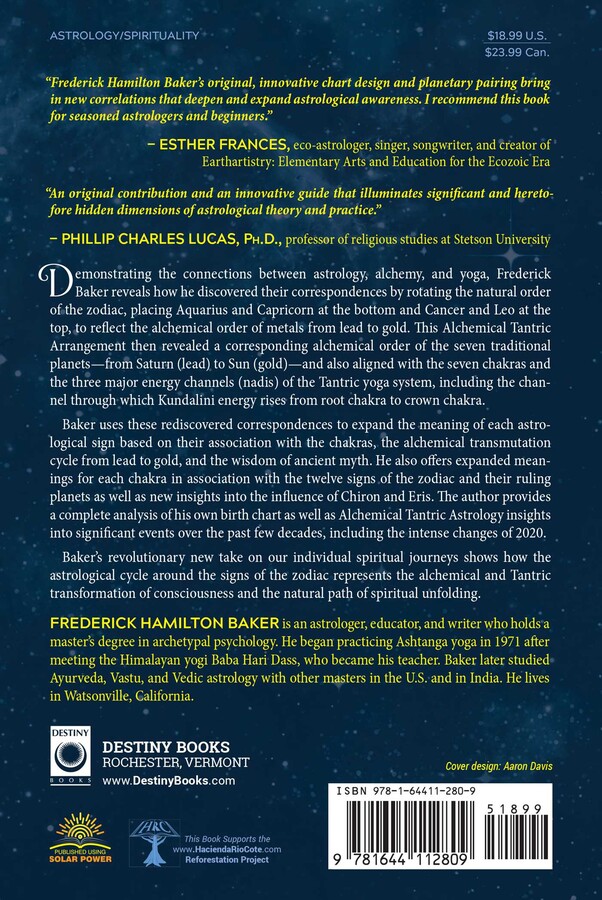 Reveals the hidden order between the signs of the zodiac, alchemy, and the Tantric yoga chakra system to unlock spiritual opportunities

Demonstrating the connections between astrology, alchemy, and yoga, Frederick Baker reveals how he discovered their correspondences by rotating the natural order of the zodiac, placing Aquarius and Capricorn at the bottom and Cancer and Leo at the top, to reflect the alchemical order of metals from lead to gold. is Alchemical Tantric Arrangement then revealed a corresponding alchemical order of the seven traditional planets--from Saturn (lead) to Sun (gold)--and also aligned with the seven chakras and the three major energy channels (nadis) of the Tantric yoga system, including the channel through which Kundalini energy rises from root chakra to crown chakra.

Baker uses these rediscovered correspondences to expand the meaning of each astrological sign based on their association with the chakras, the alchemical transmutation cycle from lead to gold, and the wisdom of ancient myth. He also offers expanded meanings for each chakra in association with the twelve signs of the zodiac and their ruling planets as well as new insights into the influence of Chiron and Eris. The author provides a complete analysis of his own birth chart as well as Alchemical Tantric Astrology insights into significant events over the past few decades, including the intense changes of 2020.

Baker’s revolutionary new take on our individual spiritual journeys shows how the astrological cycle around the signs of the zodiac represents the alchemical and Tantric transformation of consciousness and the natural path of spiritual unfolding.

From Chapter 1. The Alchemical Tantric Arrangement and Astrology’s Rosetta Stone

In a manner similar to “translating” the original Rosetta Stone, we have accomplished the first step in our process of translation by creating the “alchemical arrangement” of the signs. This arrangement puts Saturn and its alchemical metal, lead, at the bottom and the Sun and its alchemical metal, gold, at the top. The resulting order illuminates the understanding of alchemy as the process of “transforming lead into gold.”

The Alchemical Arrangement of the signs with their planetary rulers and associated alchemical metals around the Zodiac “wheel,” with Leo (Sun/Gold) and Cancer (Moon/Silver) at the top:

Medieval alchemy acknowledged a correlation between planets in the heavens and metals in the earth: “AS ABOVE, SO BELOW.” In fact they used the same symbols for both metals and planets.

Alchemy’s goal in a profound sense is of transforming lead into gold, a metaphor for the transformation of consciousness. We can see in the progression of the metals from grey lead, to useful tin and iron, to beautiful copper, shiny silver, and glistening gold, a movement toward more beauty and value. Likewise, the goal of the spiritual path is the transformation of consciousness from more conditioned patterns of thinking and behavior to freedom and enlightenment.

Observe that the seven traditional planets and their seven alchemical metals correspond perfectly with the seven chakras of tantric yoga. Yoga practitioners are familiar with the subtle energy wheels or chakras of Tantric Yoga. The chakras are most often seven in number and are associated with areas of the human physical body, from the base of the spine to the crown of the head. Various descriptions of the chakras and their symbolism will be developed more fully below and in the Appendix.

The seven planetary metals correlate with the seven chakras, from lead at the bottom or root chakra to gold at the top or crown chakra. Importantly, the overlay creates a perfect co-relation between the central heart chakra’s twelve petals, the twelve signs of the zodiac, and the twelve houses of astrology. The heart chakra is central to the chakra system with three chakras above and three below, and its symbol is a six-pointed star of two interlocking triangles pointing up and down. Thus the center of the chakra system is perfectly aligned with the central point of the astrology chart.

Beginning with Capricorn and Aquarius on the bottom of the zodiac wheel (relating to the 1st chakra), note that both of these signs were traditionally ruled by Saturn, whose metal is lead in Alchemy, also known as the prima materia or the primary material of the alchemical process of transformation. Moving upward, the other pairs of signs are: Sagittarius and Pisces, ruled by Jupiter (alchemical metal tin, 2nd chakra); Scorpio and Aries (Mars/iron, 3rd chakra); Libra and Taurus (Venus/copper, 4th chakra); Virgo and Gemini (Mercury/mercury, 5th chakra); Cancer, ruled by the Moon, which is related to silver, and the 6th chakra; and finally Leo, ruled by the golden Sun and related to the 7th or the thousand-petaled lotus crown chakra.

This arrangement symbolizes what the alchemists called “The Philosopher’s Stone,” a tool with the legendary alchemical ability to transform lead into gold. Similarly, in the chakra system, the movement upward through the chakras follows the awakening of a powerful transformative energy called “kundalini” and its movement through the seven chakras and their seven associated subtle elements (earth, water, fire, air, ether, sound, and light -- five traditional elements plus two super-subtle elements).

The Alchemy of the Trans-Saturnian Planets

Medieval alchemists were aware of seven planets in the heavens (including the Sun and Moon) and correlated them with seven metals in the earth. The “accidental” discovery by amateur astronomer William Herschel in 1781 of a possibly new planet opened the way for amazing synchronicity. Johann Bode, a German astronomer who calculated the new planet’s orbit, thought that the newly discovered planet should be named for Saturn’s father, “Ouranus,” divinity of the heavens, because Saturn had been named after Jupiter’s father. That is how the seventh planet from the Sun got the name “Uranus.” Interestingly, Johann Bode’s friend, chemist Martin Klaproth, in support of Bode’s name for the new planet, named the new element he discovered around this same time “uranium,” linking the planet Uranus with the radioactive element uranium. Eventually, astrologers assigned this new and unique planet Uranus as the ruler of the innovative sign Aquarius.

The alignment among the three disciplines of Astrology’s Rosetta Stone (astrology, alchemy, and tantra) presented above is more striking now when the planets beyond Saturn and their radioactive metals are added. When we observe that Uranus relates to the radioactive element uranium, that the next element in the Periodic Table radioactive element neptunium correlates with the planet discovered next, Neptune (the new ruler of Pisces), and radioactive element plutonium, next in the Periodic Table, correlates with Pluto (the new ruler of Scorpio), then the alignment among the three systems is even more striking.

The amazing progression of the more recently discovered planets and the radioactive elements named for them represents what in tantric yoga is called “the awakening of kundalini energy.” The outer circle of signs of the zodiac and their original ruling planets in the ATA represents the natural cycle of life and its revolution/evolution; while the direct inward/upward movement of energy via the Chiron portal and central nadi leads to involution/evolution. Although both paths hold potential for the evolution of consciousness, “revolution” suggests repetition, while “involution” implies a movement inward to the source/center.
Frederick Hamilton Baker

Frederick Hamilton Baker is an astrologer, educator, and writer who holds a master’s degree in archetypal psychology. He began practicing Ashtanga yoga in 1971 after meeting the Himalayan yogi Baba Hari Dass, who became his teacher. Baker later studied Ayurveda, Vastu, and Vedic astrology with other masters in the U.S. and in India. He lives in Watsonville, California.

“An original contribution and an innovative guide that illuminates significant and heretofore hidden dimensions of astrological theory and practice.”

“Alchemical Tantric Astrology is a profound marriage of three sets of symbols. They all come together as the serpent fully uncoils at the crown, unveiled by the Moon’s nodes. Hermes’s signposts on the way to self-realization light them up as never before! Creative and original--not to be missed!”

“A unique and useful integration of cosmology, chakras and metals, spiritual yoga, and meditations.”

“Frederick Baker’s wit and scholarly approach emboss a brilliant and highly original formation that holds great promise for all students of astrology and yoga.”

“Speaking in symbols we discuss a shared truth that is deeper than words can describe. When we can see solid, clear intersections across symbolic systems, we see truths deeper than any system alone could say. Frederick Baker has given us this, through his blessed lifelong focus, a new weave of our oldest views of the ‘beyond verbal,’ weaving those shared beauties into a yet deeper view of our reality.”