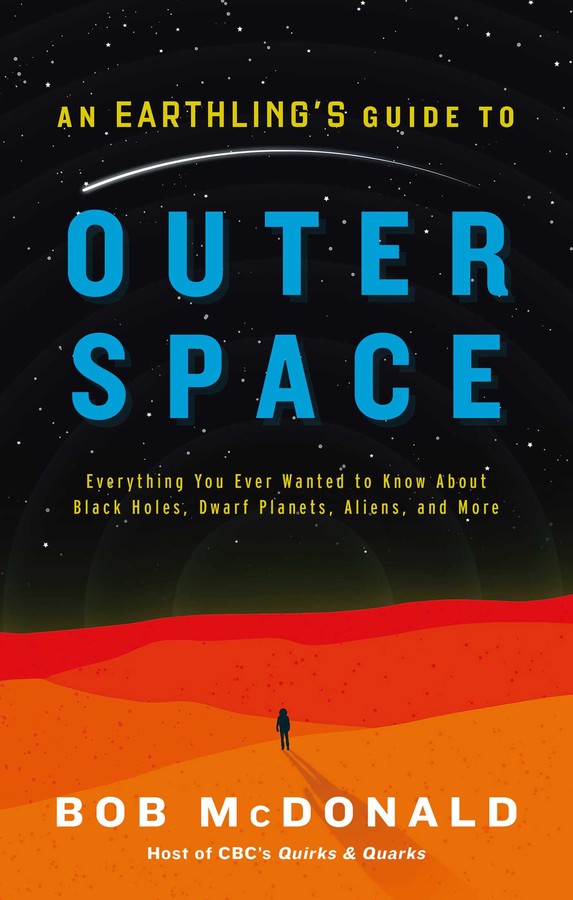 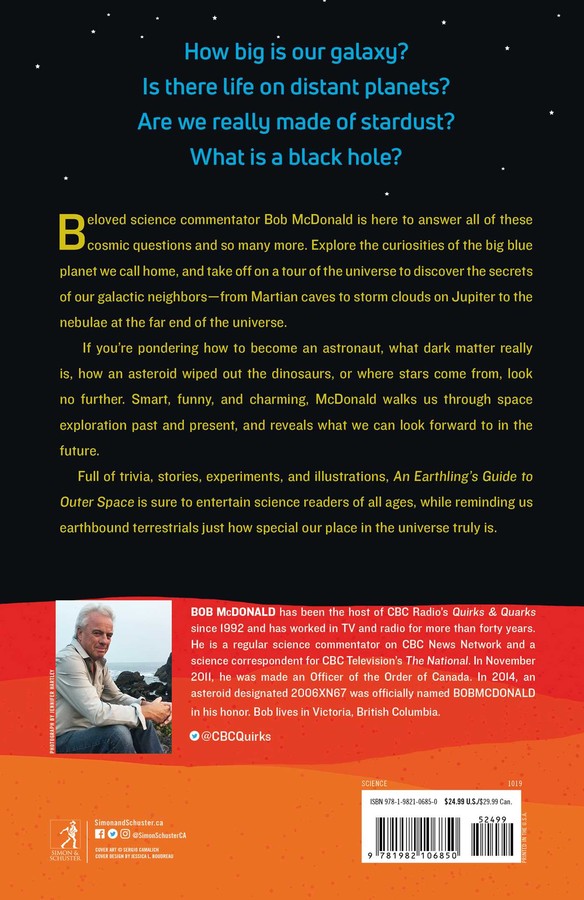 An Earthling's Guide to Outer Space

Everything You Ever Wanted to Know About Black Holes, Dwarf Planets, Aliens, and More

Beloved science commentator Bob McDonald takes us on a tour of our galaxy, unraveling the mysteries of the universe and helping us navigate our place among the stars.

How big is our galaxy? Is there life on those distant planets? Are we really made of star dust? And where do stars even come from?

In An Earthling’s Guide to Outer Space, we finally have the answers to all those questions and more. With clarity, wisdom, and a great deal of enthusiasm, McDonald explores the curiosities of the big blue planet we call home as well as our galactic neighbours—from Martian caves to storm clouds on Jupiter to the nebulae at the far end of the universe.

So if you’re pondering how to become an astronaut, or what dark matter really is, or how an asteroid wiped out the dinosaurs, look no further. Through a captivating mix of stories, experiments, and illustrations, McDonald walks us through space exploration past and present, and reveals what we can look forward to in the future.

An Earthling’s Guide to Outer Space is sure to satisfy science readers of all ages, and to remind us earthbound terrestrials just how special our place in the universe truly is.

Chapter 1: How Big Is Our Galaxy? 1 How Big Is Our Galaxy?
Our Earth is floating through a beautiful whirlpool of stars almost too large to imagine. We call our galaxy the Milky Way because it looks like someone spilled milk across the night sky. You can see it with your own eyes, but it’s a little tricky. You have to find a dark place where there are no streetlights, away from towns and cities, on a clear night when the moon is not up. If you can find a spot like that—in the country, beside a lake, on a farm—and look up on a summer night, you’ll see a ghostly glow arcing across the entire sky, a bridge of stars that reaches from horizon to horizon.

That’s our home galaxy. But there’s much more to it than meets the eye. Looking up from the ground at night, we don’t see the whole galaxy because we’re inside it, the same way you can’t see your entire town or city from your front door.

If you could soar above the Milky Way, what a spectacular sight you would witness—a luminous swirl of stars with four graceful, curving arms wrapping around one another in a pinwheel shape. Our sun is just one of hundreds of billions of stars on that merry-go-round. We live on the inside edge of one of the galaxy’s curving arms, about two-thirds of the way out from the center, and the nearest star to our sun is more than four years away at the speed of light.

If you wanted to travel around the entire galaxy the way fictional starships in movies do, you’d need a fast ship—one that could move at the speed of light, at the very least. And that is crazy fast. At light speed, you’d cover three hundred thousand kilometers, or seven times around the Earth, in one second. You could visit the moon and come home again in a second and a half, or travel to Mars in twenty minutes.

But even traveling at that incredible speed, it would still take you thirty thousand years to travel from Earth to the center of the galaxy. And if you tried to cross from one side to the other, it would take one hundred thousand years.

Take a walk through the Milky Way Galaxy in the Galaxy Garden in Hawaii. This big, circular garden was designed in the exact shape of the Milky Way, with different plants representing the stars and nebulae. A funnel-shaped fountain in the middle of the garden represents the black hole in the center of the galaxy, and all of the plants are arranged in curving arms that resemble the spiral shape of our galaxy.

If you want to find the Earth, you will have to look hard, because on the scale of this garden, it is too small to see with the eye. But there is a spot, a little more than halfway out from the center fountain, where a little dot on the leaf of one plant represents our sun.

That number is so huge, it’s hard to wrap your head around. But you can get a sense of how many that is by imagining every star as a grain of sand. If you pick up a handful of sand, you’re holding a few thousand grains. That’s about the number of stars you can see with your eyes on a clear night. But that’s only a tiny fraction of what’s really out there.

An average dump truck holds approximately as many grains of sand as there are stars in the Milky Way. Imagine that dump truck full of sand spread out roughly thirty meters across, or the area of a baseball diamond. That’s the size of our galaxy. But it’s only one of about a hundred thousand million other galaxies that make up the rest of the known universe.

If all the stars in the universe were turned into grains of sand, they would cover all the beaches in the world.

After you’ve pondered that, pick up just one little grain of sand on the end of your finger and look at it. That’s one star—our sun. At that scale, the Earth is not even visible to your eye.

The universe is incredibly vast and filled with an unimaginable number of stars. It can make you feel small and insignificant when you think about it all. But remember this: we may be small, but at least we know our place in the universe!

Of course, for now, we don’t have any spaceships that can take us across the galaxy, so we have to journey there in our imaginations. To do so, lie on the ground. Don’t think about the sky as “up.” Think of it as a huge space that reaches out in all directions. Remember, there are just as many stars “below” you as there are above, because you’re lying on a big ball. And you are not on top of the ball—that’s the North Pole. You’re somewhere on the side. (The next time you see a globe of the Earth, find your city and see what side you live on.) If you think of yourself like a fly on a wall, with the ground behind you instead of below you, and the stars in front of you instead of above, you’ll get a truer sense of your place in space.

THE FUTURE IS NOW

It doesn’t happen very often, but every once in a while, two galaxies run into each other. Don’t worry, no one gets hurt. Galaxies are mostly made of empty space, with the stars so far apart that two galaxies can pass right through each other without anything actually touching. But when they get too close, gravity can pull them out of shape, rearranging those long spiral arms.

Eventually, our Milky Way is going to collide with the next-biggest galaxy close to us, Andromeda. Luckily, that won’t happen for another four billion years! When it does, though, there will be two Milky Ways in the sky!

Bob McDonald has been the host of CBC Radio’s Quirks & Quarks since 1992. He is a regular science commentator on CBC News Network and science correspondent for CBC TV’s The National. He has been honoured with the 2001 Michael Smith Award for Science Promotion from the Natural Sciences and Engineering Research Council of Canada; the 2002 Sandford Fleming Medal from The Royal Canadian Institute; and the 2005 McNeil Medal for the Public Awareness of Science from the Royal Society of Canada. In November 2011, he was made an Officer of the Order of Canada. In 2014, an asteroid designated 2006XN67 was officially named BOBMCDONALD in his honour. Bob lives in Victoria, British Columbia. Visit him on Twitter @CBCQuirks.

An Earthling's Guide to Outer Space

Everything You Ever Wanted to Know About Black Holes, Dwarf Planets, Aliens, and More