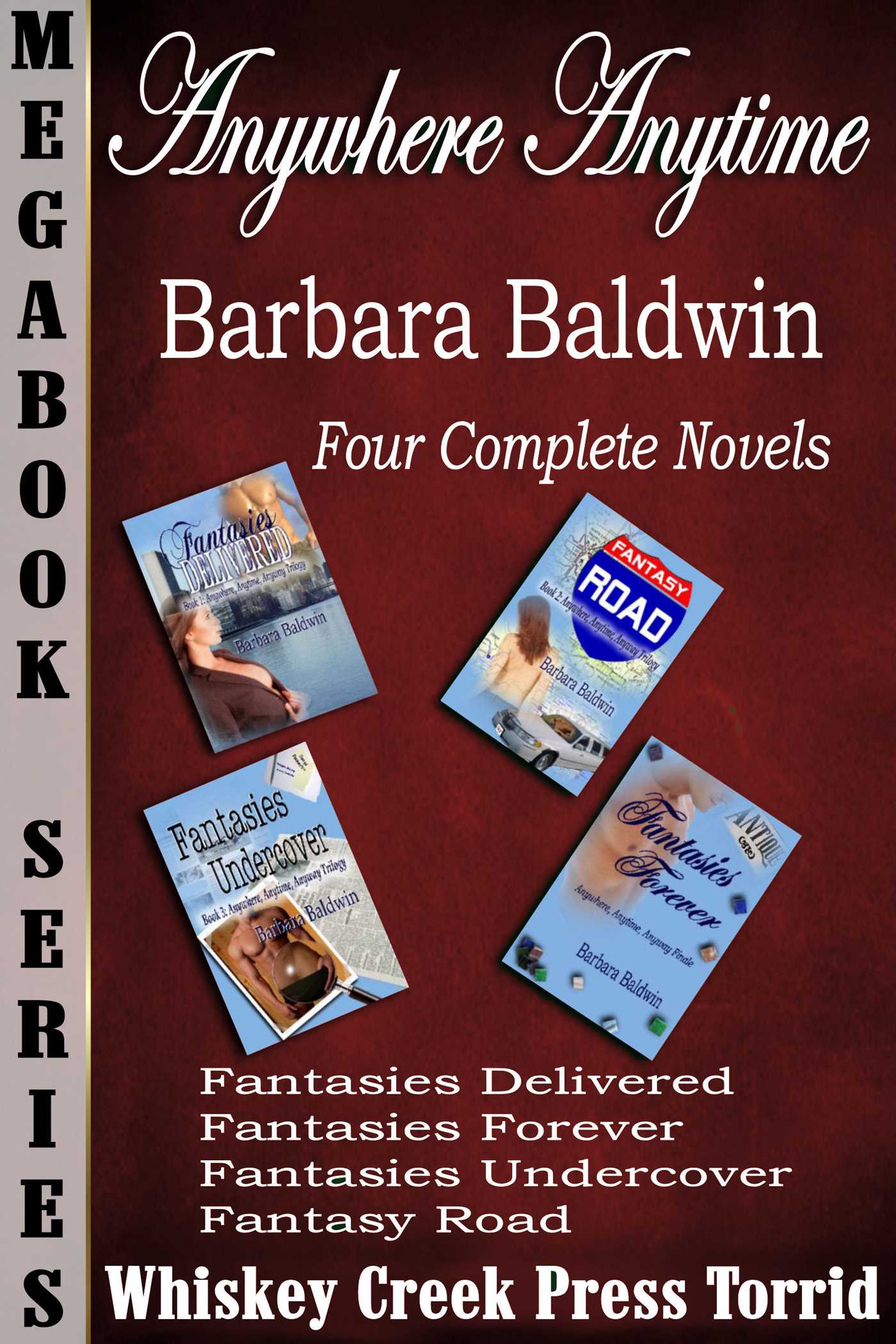 FOUR COMPLETE NOVELS, ONE MEGABOOK SERIES LOW PRICE! The entire four volume ANYWHERE, ANYTIME, ANYWAY Series of the loves and lives of the McVicker Brothers, from Bestselling author Barbara Baldwin, including:Fantasies Delivered: Behind the ordinary façade of the workaday world, Gage, Chase and Travis McVicker have more to their backgrounds than meets the eye, because their best quality -- passionate sex -- is one skill you won't find on their resumes. Gage McVicker is a disillusioned millionaire who takes a break from business to travel the country doing odd jobs. While working in the mailroom of a New York publisher, he meets Keva Monroe, senior editor of erotic romance, and it doesn't take long for him to discover she's as hot in bed as the books she edits. But in order to get her right where he wants her, he pens his own manuscript and then proceeds to bring those fantasies to life. Fantasy Road: Chase McVicker owns fifteen limousine companies and occasionally acts as chauffeur. Katie Jo Hawthorne is hiding out from an ex-husband as she tries to find the reason behind her father's death, and she's more interested in the previous owner of one particular limo than she is its current driver. That is, until she gets sidetracked when Chase shows her ways to utilize a stretch limo that makes her fantasies come true. But when they discover someone is tracking her movements, it takes more than Chase's driving ability to save them from the bad guys and all of his passion to save Katie from herself.Fantasies Undercover: Travis McVicker, a reporter for a Boston newspaper, focuses most of his attention on undercover exposés of corrupt businesses. Currently, though, he would rather be under the covers with Morgan Gentry, a former classmate who has started to work at the same paper. In the midst of discovering a passion they had felt but never consummated years before, Morgan becomes involved in a dangerous scheme to expose a group of corrupt doctors and it takes every investigative skill Travis has to find her before it's too late.Fantasies Forever: When the McVicker brothers and their wives get together, interesting, not to mention steamy and sexy, things are bound to happen. This time, it started with a simple question - "Why isn't John married?" The sisters-in-law decide John needs a woman in his life - someone soft and quiet, gentle and reserved to bring out his protective instincts. However, when John believes he's being stalked, his brothers hire Cori Taggart, a bodyguard, because she's assertive, hot and sexy, and they hope John will take notice. John doesn't realize everyone is plotting, but that's in his best interest because he hates being set up. Left to their own devices, John and Cori discover an explosive chemistry. Cori likes to be in control and John has no problem letting her. But can Cori keep her personal and professional relationships separate when John is in real danger and it's up to her to save him? GET ALL FOUR BOOKS IN THIS LOW PRICED MEGABOOK SERIES RELEASE! Genre: Torrid Romance Contemporary Rating: Sensual Romance - Sensual (Contains adult content, language, and graphic sex)