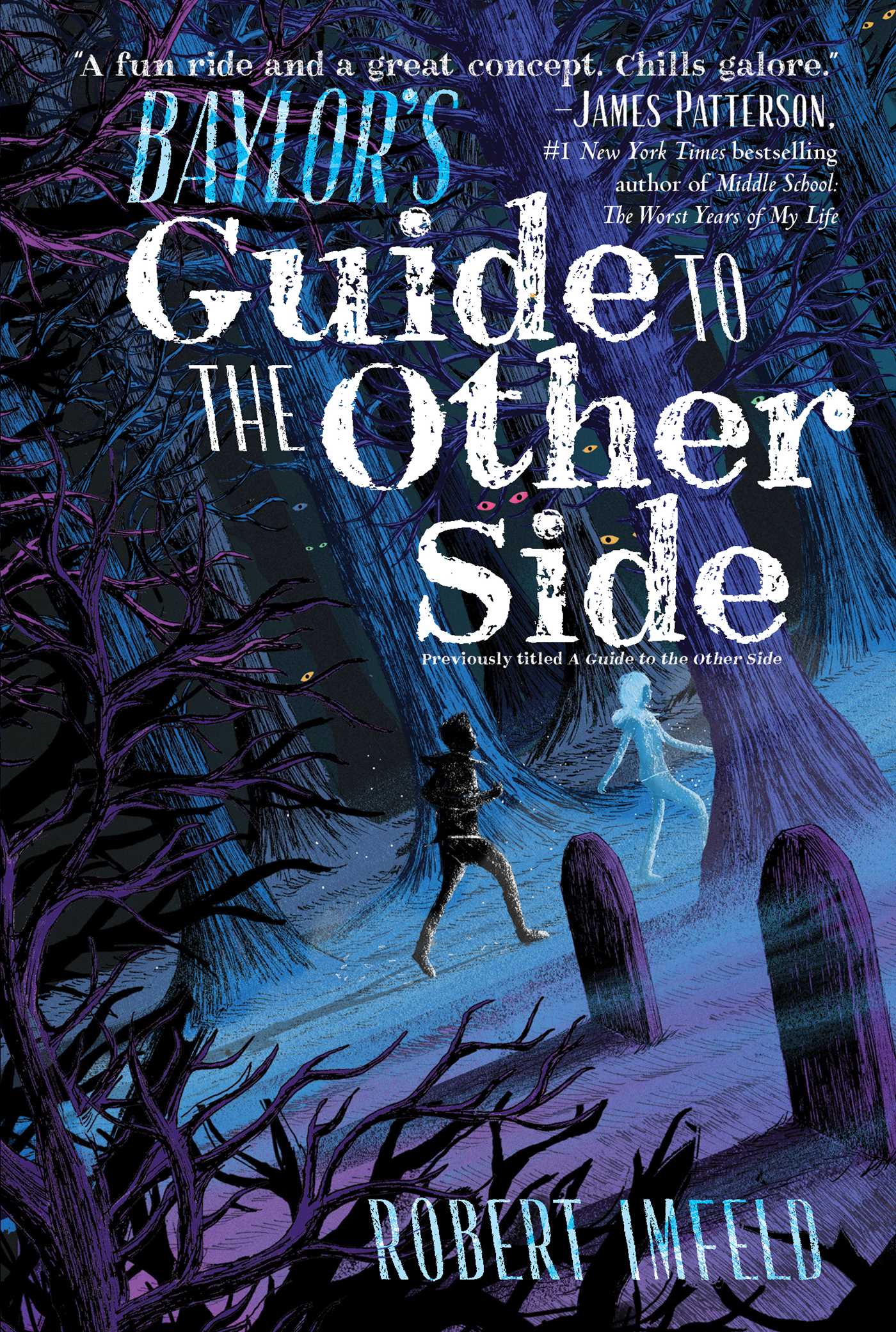 Baylor's Guide to the Other Side

A boy and his ghostly twin sister work together to pass messages from the beyond in this “funny, mystical, and endearing” (Kirkus Reviews) debut that James Patterson called “a fun ride and a great concept.”

There are a few things you should know about Baylor Bosco: He’s thirteen years old, he has a twin sister, and he really does NOT like ghosts…which is problematic because he’s a medium and sees ghosts everywhere.

Oh, and his twin sister, Kristina? She’s a ghost too.

They’ve been working as a pair for years, expertly relaying messages from ghosts to their still-living loved ones. Baylor’s even managed to come up with an introductory phrase—one that he has to use far too often.

But when a strange ghost shows up close to Halloween, a grown man, covered in a sheet, with only his black leather shoes showing from the bottom, Baylor starts to wonder if something else has taken notice of him. And when his sister goes missing, somehow ghost-napped, he’s forced to figure out the truth about the Sheet Man and his sister’s disappearance, all without help from his usual ghostly ambassador.

A Guide to the Other Side

TIP 1 A good routine is KEY.
MY DAY CAN’T BEGIN WITHOUT my routine.

1. Wake up and light a candle. (I prefer a simple white candle, though I’ve been known to shake it up during the holidays and use a pine scent.) I breathe deeply and encircle myself with positive energy.

This first step is crucial to having a good day.

2. Check my dream journal to see if I scrawled any messages in the middle of the night. (There are a couple of lines on the page sometimes, but I’m pretty good at remembering my dreams, not to brag or anything.)

3. Check in with my twin, Kristina, and ask her how her night was.

4. Ask for only good vibes to emanate from the Beyond before I blow out my candle and start my day.

A chilly Thursday morning just two days before Halloween, the worst holiday ever created, I lit seven candles and placed them around me, creating a fiery barrier. I’d been doing the same thing at night, too, for the past week. Halloween may be fun for everyone else, but for someone who can communicate with ghosts, I can assure you it’s not fun at all. Halloween is the one time of year where it can be tricky to control the malevolent spirits. So many of them try to break through, even if I ensure through my protections they can’t communicate with me directly. It’s all because of the morons who wear those grotesque, bloody masks and costumes without realizing the very real effect it has on my life.

Those costumes summon negative energy, and I can literally feel the forces floating around, circling me like sharks around a bloody seal. Kristina hates Halloween more than I do. I can forbid those spirits from entering my vision, but she can’t, so while I’m walking down the street, choosing to be oblivious, she’s turning left and right, looking at one horror after the next. I don’t envy her.

It was on our walk to school that she mentioned how it was getting pretty bad already.

“Everyone must have tried on their costumes last night,” she said. “You would not believe how many murderers and politicians we’re passing.”

“Are they saying anything to you?” I asked. My shoes crunched up the yellow leaves that covered the sidewalk.

“No, they’re mostly grunting a lot. They know not to mess with us.”

“I still don’t get how they know that. Who would come rocketing over to this side to punish them?”

“I’m not entirely sure, but I know it would be bad,” she said. “I think it’s better not to know.”

She was wrong. I wanted to know so bad. She always said stuff like that to me: “We’re not permitted to know that yet,” “We haven’t learned enough to earn that knowledge.” It was so frustrating that I couldn’t grab her and shake more information out of her like I could with my little brother, Jack.

“Can you hear that?” she asked.

“Yeah.” Some man was screaming about a lost dog, but I’d been awake for only twenty minutes and didn’t want to deal with ghosts yet. “Does he expect me to knock on his wife’s door and deliver a message for him? He knows that’s not how this works.”

“Give him a second,” Kristina said lightly.

Three seconds later a door opened two houses ahead, and a woman walked out wearing a green bathrobe and pink slippers. Her arms were clenched across her chest, and she was looking around, confused.

“Why did I come out here again?” she mumbled.

Kristina raised an eyebrow at me, and I rolled my eyes and muttered, “It’s too early for this,” before I slouched my way up to the woman and said, “Excuse me, ma’am?” She turned my way and looked at me like I’d just personally caused her dog to run away.

“My name is Baylor Bosco, and I can communicate with people who have crossed over.” I must have repeated that exact sentence more than two thousand times by now. “Your husband wanted me to let you know that your dog is with him on the other side now, and, well, it’s time to move on, Trish. The animal shelter has a small brown terrier he thinks you might like.”

I braced myself for her reaction. I might have done this more than two thousand times by now, but I was never sure how people would react. I got off easy this time, though. The woman’s mouth dropped open, and her eyes filled with tears.

“How did you know that?” she asked. They always ask that too, even though I’ve just told them I can communicate with dead people.

“I was born with a gift,” I said, shrugging. “Oh, he also wants me to tell you that you need to change the curtains because they’re hideous.”

“That is just like him to say.” She laughed so heartily that I found myself wishing everyone would react as well to weird messages like that. “Is he doing okay?”

Then I kept on walking. Normally, I would engage with the alive person more, but her husband was still shouting nonsense in our ears and I needed him to stop. It was 7:30 a.m., and no one, dead or alive, should have permission to scream that early. After I broke the connection, the shouting stopped, as it always did after I shared a healing message. It was Kristina’s job to seal the ghosts on the other side and make sure they no longer disturbed us.

It might seem harsh, but some of them just don’t get it. I’m here to relay the message, and it’s not up to me whether the person on the receiving end listens or not. When I first started delivering messages, before Kristina helped me tune out most spirits, I’d have these horribly persistent ones poking me over and over to deliver the same message I’d just passed along.

“They didn’t believe you, you need to go back over and try again,” they’d say.

Later Kristina established a rule with the ghosts: If you’re going to use Baylor to deliver a message, you’ve got only one shot to deliver it. They could come back with a different message, and that’d be fine, just as long as it wasn’t the same one.

“He was loud,” I grunted. I hadn’t slept well last night because I kept getting ruffled by some ghost children who passed through my room.

“You think it’s loud? Try being on this side of the fence. The man was practically screaming in my ear.”

“Shut up, they hear better than yours do.”

Robert Imfeld grew up in Orlando, Florida, and like any self-respecting Floridian, evenly split his free time between the beach and Disney World. After graduating from the University of Florida, he put his journalism degree to good use by saving lives at a luxury resort (some call this “lifeguarding”) in Orlando, interning/brewing coffee at a production company in Los Angeles, and managing finances for country songwriters in Nashville. He now lives in New York City, where he works in marketing by day and writes books for kids by night.

Baylor's Guide to the Other Side