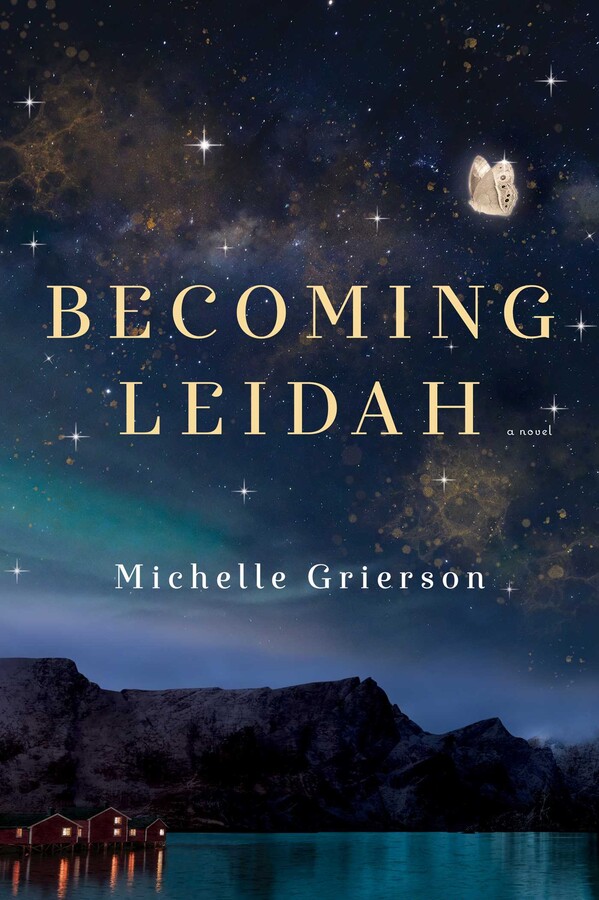 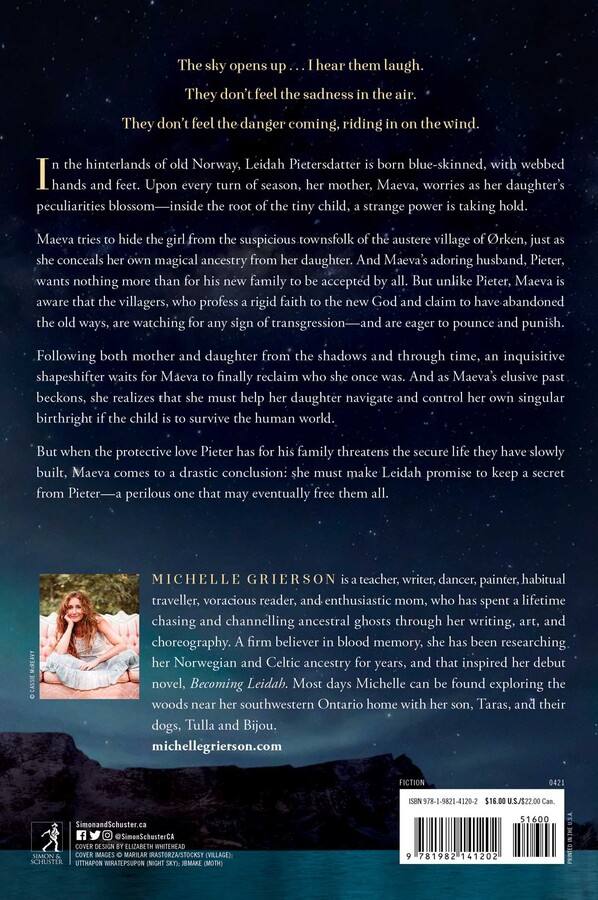 An utterly gripping love story set in nineteenth-century Norway, about a woman rescued from the sea, the fisherman who marries her, their tiny and unusually gifted daughter, and the shapeshifter who follows their every move, perfect for fans of Alice Hoffman, Yangsze Choo, Eowyn Ivey, and Neil Gaiman.

In the hinterlands of old Norway, Leidah Pietersdatter is born blue-skinned, with webbed hands and feet. Upon every turn of season, her mother, Maeva, worries as her daughter’s peculiarities blossom—inside the root of the tiny child, a strange power is taking hold.

Maeva tries to hide the girl from the suspicious townsfolk of the austere village of Ørken, just as she conceals her own magical ancestry from her daughter. And Maeva’s adoring husband, Pieter, wants nothing more than for his new family to be accepted by all. But unlike Pieter, who is blinded by love, Maeva is aware that the villagers, who profess a rigid faith to the new God and claim to have abandoned the old ways, are watching for any sign of transgression—and are eager to pounce and punish.

Following both mother and daughter from the shadows and through time, an inquisitive shapeshifter waits for the Fates to spin their web, and for Maeva to finally reclaim who she once was. And as Maeva’s elusive past begins to beckon, she realizes that she must help her daughter navigate and control her own singular birthright if the child is to survive the human world.

But the protective love Pieter has for his family is threatening the secure life they have slowly built and increasingly becoming a tragic obstacle. Witnessing this, Maeva comes to a drastic conclusion: she must make Leidah promise to keep a secret from Pieter—a perilous one that may eventually free them all.

The wind—a fluttering of breath from those Sisters of Fate—sent wave after rising wave, rolling at a steady pace from the west. Pushing the trawler away from any hope of land. No longer steering toward the fjords of home, the vessel turned and turned in the endless surge of ocean. The certainty of Norway’s shoreline was lost in the ominous squall lines dripping from the heavens. The sky bruised from blue to black, and the sea’s hunger widened like a gaping yawn. He knew they were done for.

He yelled to his mate to angle the hull into the wind. But a confused swell of square waves—the dread of every sailor and fisherman—breached across the bow, throwing him to the rails. A strike of lightning met the ocean in fury, igniting the water into two massive walls rising on either side of the boat. White knuckles gripping the railing, the two men steeled themselves. The boat flew weightless in free fall. His hands slipped, and he was airborne. The trawler tipped, crashing into the valley between the swells. He heard the terrible rushing sound of water, sucking hungrily at them. He hit the deck sideways, sliding into the cold.

He scrambled to hold on to something, but it was no use. The gods had acted. The weight of water dragged him under, as if an anchor were tied to his legs. He held his breath as long as he could, but fear made him panic. Punching, kicking, thrashing, he fought against the monstrous current. His fervent prayers, swallowed deep into the throat of the sea.

The gods proved fickle that day, though; the waters flipped and whirled, throwing his limp, weak body up to the surface. Spitting him back out, like rotten meat.

Unconscious, he lay flat in the shallows, belly-up. Alone. Cold water rushed up his trouser legs, reaching with icy fingers as the tide washed in. It pushed him sideways, filling his mouth with salt. Sputtering, he rolled over. Retched, and retched again. Crawled out of the waves, then collapsed onto the beach.

A voice had pulled him from sleep. A woman sang a song in a language he did not recognize, the words lilting and long. Somehow, her syllables of sorrow, of distant places and loves he yearned to know, rushed to caress his skin. Am I dreaming? he thought. He opened his eyes, the light blinding him momentarily. Silver-white reflections—like butterflies bobbing up and down in the wake of sunrise—roused him to full consciousness. A clear blue sky was above him. Where am I?

He was nauseated, wary, as if he had a night of drink in him. He tried to remember how he had gotten here—at the shoreline of the end of the world, it would seem—but the stranger’s voice drowned out his thoughts. The song ebbed and flowed, washing over him, oblivious to any presence, lilting over the sand and dancing on the tides, across the pearls of white foam. His eyes searched the beach, almost expecting a creature to rise up out of the dunes. He had heard of such things: half woman, half bird; singing sailors to death, seducing them to choose a watery grave rather than face a dreary life without the rapture of such a voice.

No creature rose up from the sands. Nor did any woman walk on water, beckoning him into the waves. Rather, her presence became known to him through taste, suddenly bursting inside his mouth. Sweetness and a bit of salt—not of the sea, but of the spicy sweat of fruit—fermented and warm, fleshy and moist. Cloudberry? He wasn’t sure. But the flavour was so overwhelming, he sat up, pressing his hand against his lips, sucking tongue against teeth.

It was then that he saw her. Perched on a bed of rock, an island unto herself, a mass of red seaweed and creamy white skin blooming in the shoals. It took him a moment to realize that the only thing she had wrapped around herself was not seaweed but hair, so long and thick it draped down her back, covering everything but her bare feet.

He didn’t move. She kept singing, her hands dipping into the water. Pulling up sea-grass, shells, and pebbles, she placed them in front of her. Her clothes lay behind her. Drying out on the rocks, he thought.

Her head rotated slowly, as if sensing his presence; his body plunged forward in a graceful dive.

The last wail of her song echoed into the wind. Her thick grey cloak, secured in his grasp.

The rescue boat came before the sun reached its peak. Minutes after her hands had pulled him out of the ocean, after he had folded her safely in his arms. She had welcomed him without words, her song vanishing into the surf. Silently, she lay down, her hair tumbling in thick tentacles over the edges of rock. The array of specimens she had collected—a puzzle she had been piecing together—a bed of chaos and sharpness beneath them.

Her body opened to him in those shoals, a white flower of spice and sweat, receiving him so sweetly, so easily. In the shallows of invisible creatures, he whispered the names of the gods over and over into her copper hair. The waves rocked his body into hers, each thrust binding them together. The delicate puzzle of sea treasures lost in the deep. 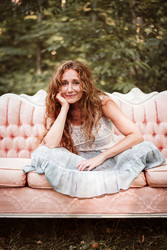 Michelle Grierson is a teacher, writer, dancer, painter, habitual traveller, voracious reader, and enthusiastic mom, who has spent a lifetime chasing and channelling ancestral ghosts through her writing, art, and choreography. A firm believer in blood memory, she has been researching her Norwegian and Celtic ancestry for years, and that inspired her debut novel, Becoming Leidah. Most days Michelle can be found exploring the woods near her southwestern Ontario home with her son, Taras, and their dogs, Tulla and Bijou.

“If you prefer your history with a dash of fantasy, dig in to Becoming Leidah, a novel that blends myth with the harsh reality of life in Norway in the distant past. This is the story of a man who married a woman rescued from the sea—and their super powered daughter. Even the most supernatural skeptics will find the Becoming Leidah’s details about nineteenth-century Norway fascinating.”
— Oprah.com

“Set in old Norway, where shapeshifters and wise women live alongside fishermen and farmers, this Canadian debut is a magical new entrée into the world of Norse mythology and Scandinavian history.”
— The Globe and Mail

“A complex novel with many layers of realities, voices, themes, and times that the author spins together to the final scene. The writing is rich with imagery." Historical Novel Society