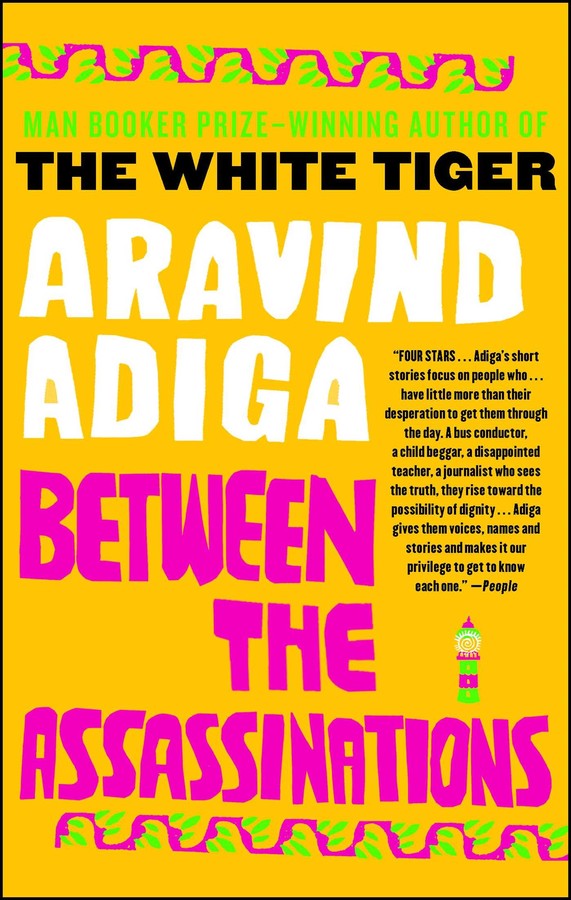 Between the Assassinations
By Aravind Adiga
Read by Harsh Nayyar

By Aravind Adiga
LIST PRICE $16.99
PRICE MAY VARY BY RETAILER

Welcome to Kittur, India. It's on India's southwestern coast, bounded by the Arabian Sea to the west and the Kaliamma River to the south and east. It's blessed with rich soil and scenic beauty, and it's been around for centuries. Of its 193,432 residents, only 89 declare themselves to be without religion or caste. And if the characters in Between the Assassinations are any indication, Kittur is an extraordinary crossroads of the brightest minds and the poorest morals, the up-and-coming and the downtrodden, and the poets and the prophets of an India that modern literature has rarely addressed.

A twelve-year-old boy named Ziauddin, a gofer at a tea shop near the railway station, is enticed into wrongdoing because a fair-skinned stranger treats him with dignity and warmth. George D'Souza, a mosquito-repellent sprayer, elevates himself to gardener and then chauffeur to the lovely, young Mrs. Gomes, and then loses it all when he attempts to be something more. A little girl's first act of love for her father is to beg on the street for money to support his drug habit. A factory owner is forced to choose between buying into underworld economics and blinding his staff or closing up shop. A privileged schoolboy, using his own ties to the Kittur underworld, sets off an explosive in a Jesuit-school classroom in protest against casteism. A childless couple takes refuge in a rapidly diminishing forest on the outskirts of town, feeding a group of "intimates" who visit only to mock them. And the loneliest member of the Marxist-Maoist Party of India falls in love with the one young woman, in the poorest part of town, whom he cannot afford to wed.

Between the Assassinations showcases the most beloved aspects of Adiga's writing to brilliant effect: the class struggle rendered personal; the fury of the underdog and the fire of the iconoclast; and the prodigiously ambitious narrative talent that has earned Adiga acclaim around the world and comparisons to Gogol, Ellison, Kipling, and Palahniuk. In the words of The Guardian (London), "Between the Assassinations shows that Adiga...is one of the most important voices to emerge from India in recent years."

A blinding, brilliant, and brave mosaic of Indian life as it is lived in a place called Kittur, Between the Assassinations, with all the humor, sympathy, and unflinching candor of The White Tiger, enlarges our understanding of the world we live in today.

By clicking 'Sign me up' I acknowledge that I have read and agree to the privacy policy and terms of use. Free ebook offer available to NEW CA subscribers only. Offer redeemable at Simon & Schuster's ebook fulfillment partner. Must redeem within 90 days. See full terms and conditions and this month's choices.
This reading group guide for Between the Assassinations by Aravind Adiga includes discussion questions and ideas for enhancing your book club. The suggested questions are intended to help your reading group find new and interesting angles and topics for your discussion. We hope that these ideas will enrich your conversation and increase your enjoyment of the book.


Discussion Questions for Between the Assassinations

1) The symbols of each major religion act “like signposts to identify the three religions of the town to voyagers from the ocean (p.39).”  Do you think these symbols act as a warning to visitors or are they welcoming signs of the diversity of Kittur?  Discuss the relationships these three world religions have with each other within the city and the tensions they cause among its inhabitants.

2) Shankara is from one of the richest families in town, yet he is ashamed of his half-Hoyka background and resents his driver for being a full Brahmin. Jamayya has no issue working for another Brahmin, but refuses to share a room with another servant, because that servant is of a lower caste. In what ways do the all characters in the book struggle with the issues of caste and class in Indian society? How do characters use caste and class to define themselves and their relationships with others?

3) Discuss how the travel guide descriptions of Kittur embellish and contribute to the development of the city’s character, as well as to the individual characters in each of the stories.  How do the descriptions act as a foil to the very personal, individual vignettes and unite them into a whole?

4) The assistant headmaster D’Mello is disillusioned with the state of the Indian government, and yet there are hints in the story of his past idealism that are revealed when he speaks to or thinks of his student, Girish. What do you suppose happened to D’Mello and how might Girish remind him of his past?  Discuss why he feels compelled to share secrets with the young boy—is he trying to protect his idealism of youth? Live vicariously through the boy?  Or protect him from the very idealism that turned against D’Mello?

5) As he is struggling not to collapse, D’Mello pulls the curtains down in the adult theater, exposing all of the pornography. He thinks to himself, “he saw everything, and he understood everything, at last.”  What do you think he has finally understood, and how did his final vision bring him to this understanding?

6) While Ratna is waiting in a bus station with the diseased boy who was going to marry his daughter, a stranger says to them, “We’ll have to hand this country back to the British or the Russians or someone, I tell you. We’re not meant to be masters of our own fate.” (p. 287) How is this underlying thought represented in the stories throughout the book? How does it permeate the minds of many of the characters?  Discuss the circumstances in Kittur that may have led to these attitudes.

7) Truth is preserved in gossip and rumor more so than in the newspapers in Kittur.  Corruption runs rampant through the police and the government.  How do the characters subtly fight this?  What is holding them back from doing more? How does corruption affect the characters’ mindsets in regard to politics and power?

8) At the Cathedral of Our Lady Valencia, one of George’s friends remarks, “You know what the biggest difference is between being rich and being like us? The rich can make mistakes again and again. We make only one mistake, and that’s it for us (p.246).”  How is this concept central to the stories of Kittur, especially that of George?

9) Even though Murali is a high-born Brahmin and successful in life, the stigma of communism prevents him from marrying a lower-caste girl—why?  Discuss Indian Communism and its interpretation of caste.  In what ways does it become its own kind of caste and why do you think it is seen as one to be avoided?

10) Many of the characters in the stories came to Kittur for a better life only to become disillusioned and lost.  How does the city swallow them? Are they limiting themselves or is the city limiting them? Why or why not?

1) Explore the city life of India further by watching a documentary with your group, such as “Born into Brothels” (2004) or “Journeyings and Conversations” (2003), both of which observe life in modern Calcutta.

2) Between the Assasinations is structured like a guidebook.  Pick up a guidebook of India and give your group a guided tour of a new city, such as Mumbai, Calcutta, or Mangalore, the town on which Kittur is based.  Have everyone pick a neighborhood to research and present their results—whether it be a photo tour of must-see monuments or a delicious regional dish to share before or after your discussion.

3) Indian literature now has a prominent place in the United States; discuss with your group other Indian authors that you have read.  How have these books come to shape your perceptions of India?  How might they have changed your previous perceptions of India?  Exchange book recommendations with other members of your group and read a book on India that you haven’t heard of, fiction or non-fiction.

Aravind Adiga was born in India in 1974 and attended Columbia and Oxford universities. He is the author of the novels Amnesty; Selection Day, now a series on Netflix; The White Tiger, which won the Man Booker Prize; and the story collection Between the Assassinations. He lives in Mumbai, India.

"The book is a work of diverse voices...the stories are always lively and keenly observed; taken together, these rich slices of life form an enjoyable and readable whole." - The Sunday Times

"A page-turner [with a] limber structure...It is Adiga's near-sightedness that brings his writing to life. His subject is the everyday frustration brought about by discriminations of status, class and religion. Yet his sense of a great Indian comedy is never far away." —The Observer

By Aravind Adiga
LIST PRICE $16.99
PRICE MAY VARY BY RETAILER