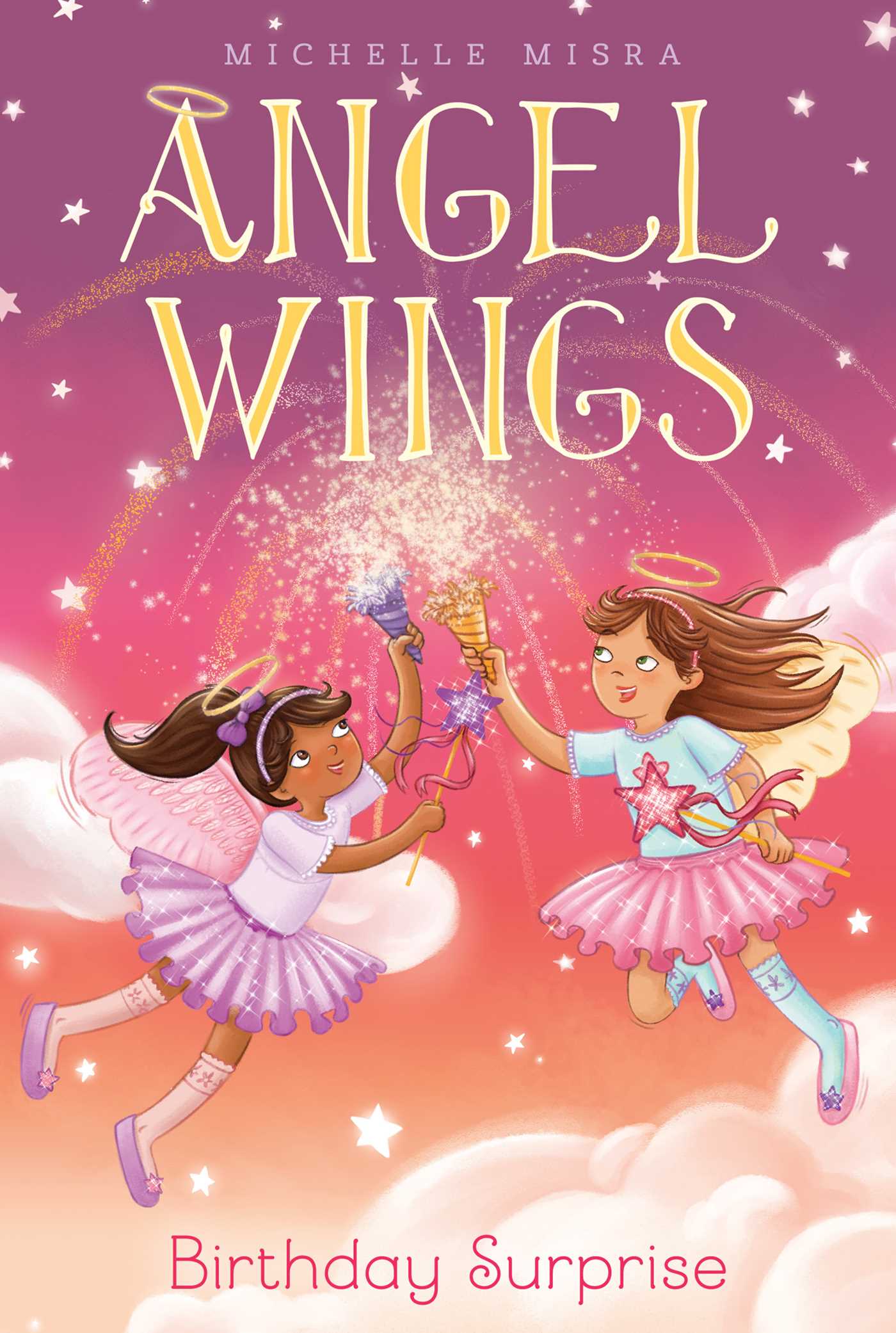 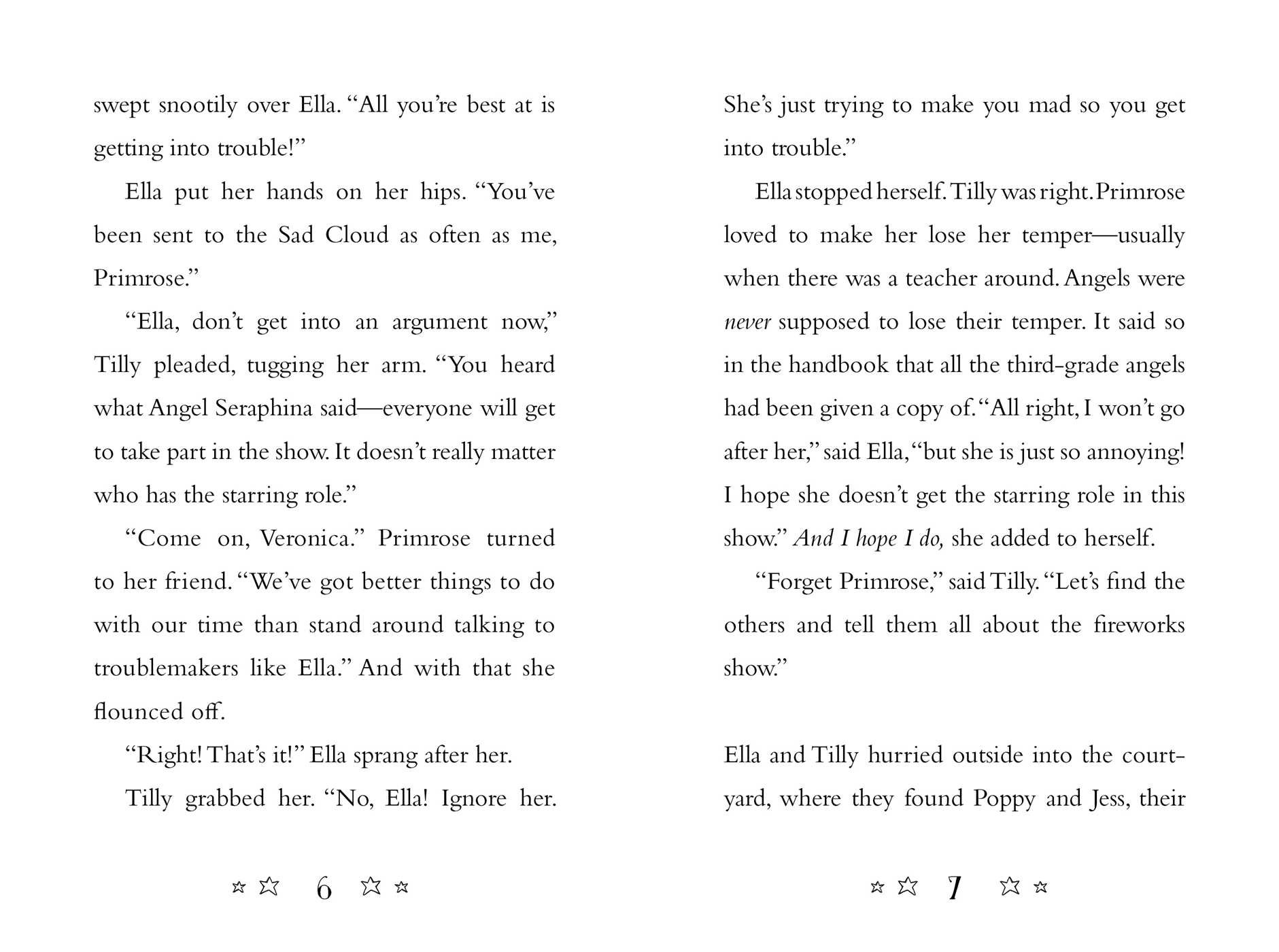 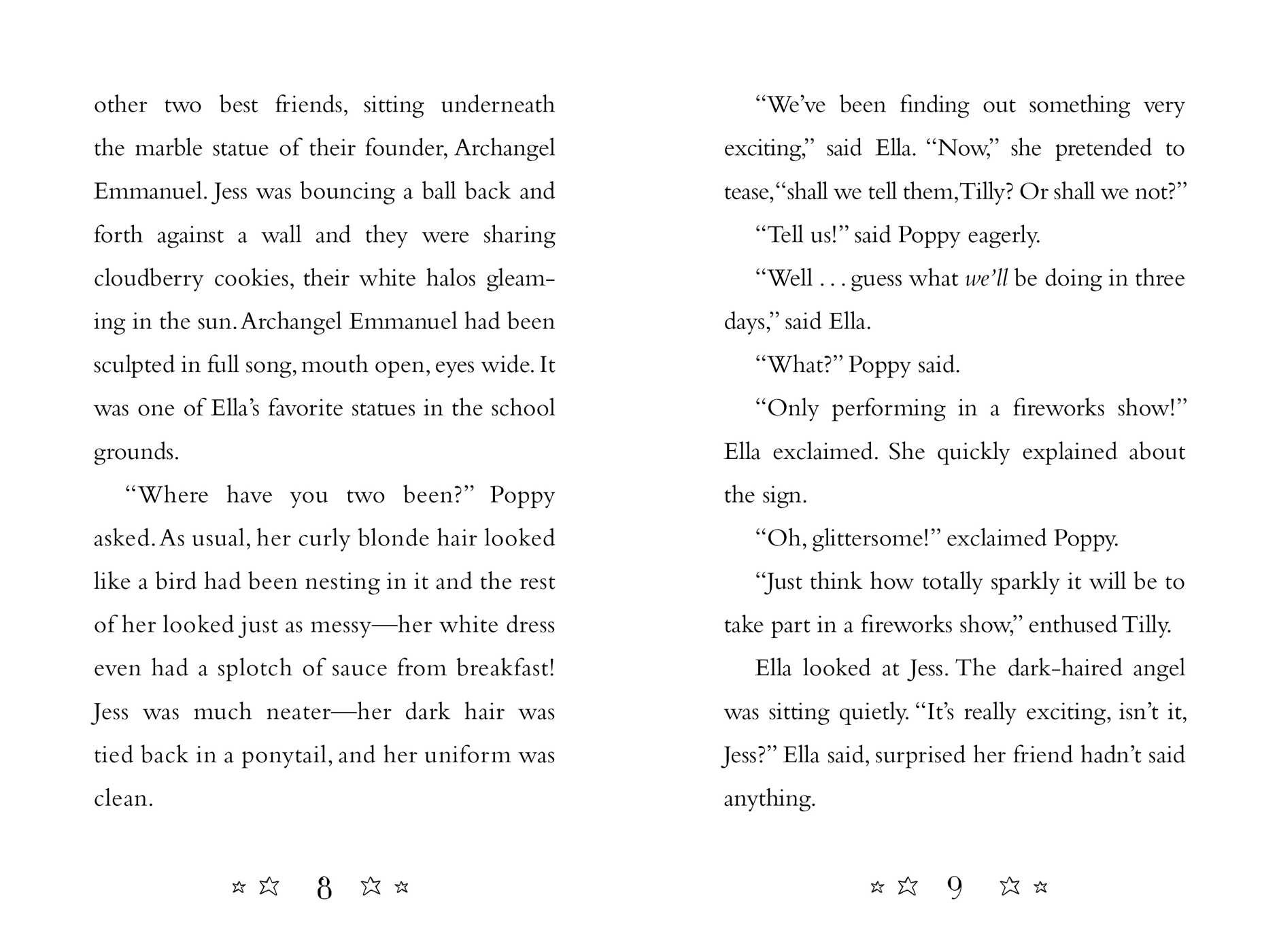 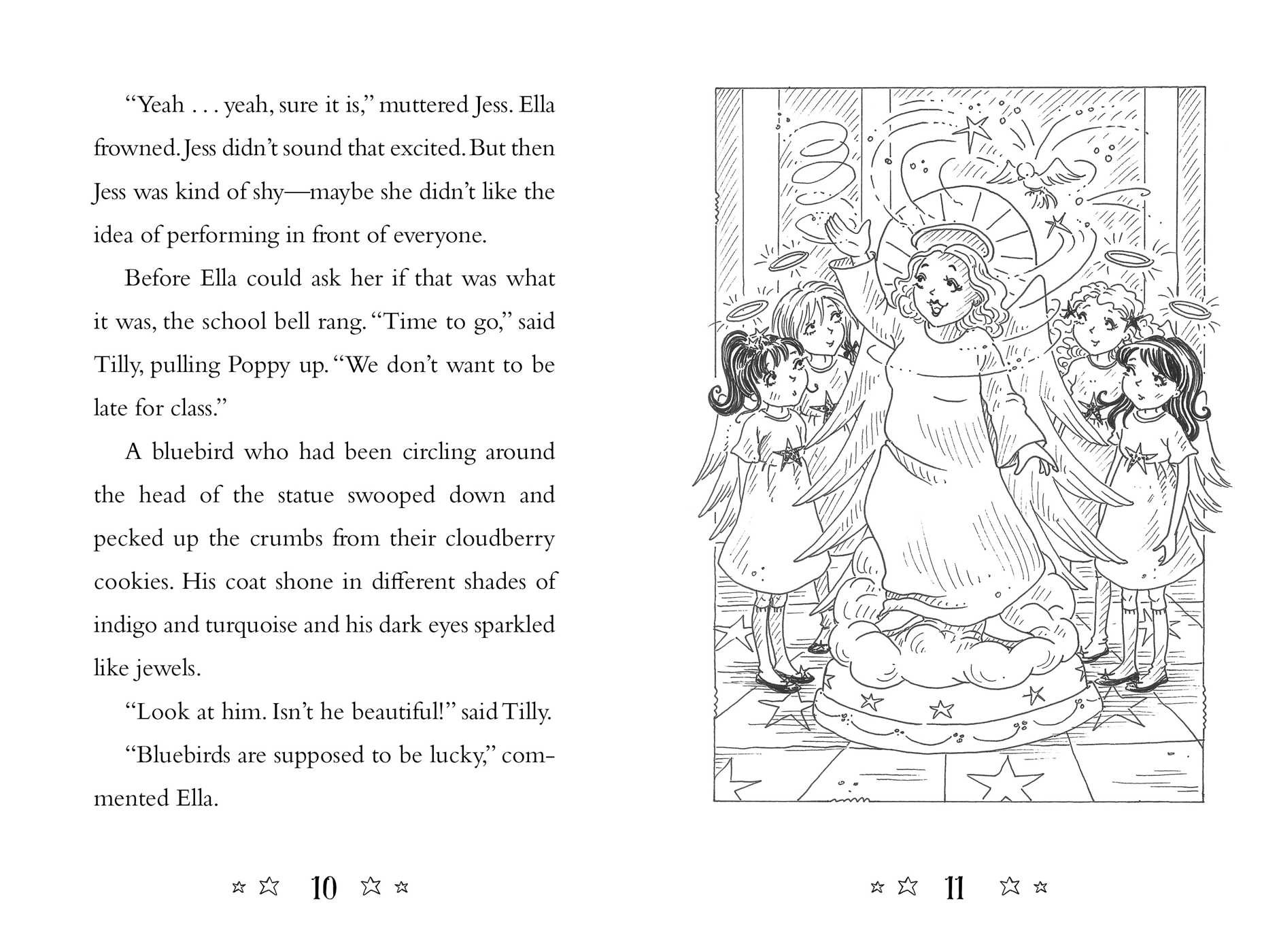 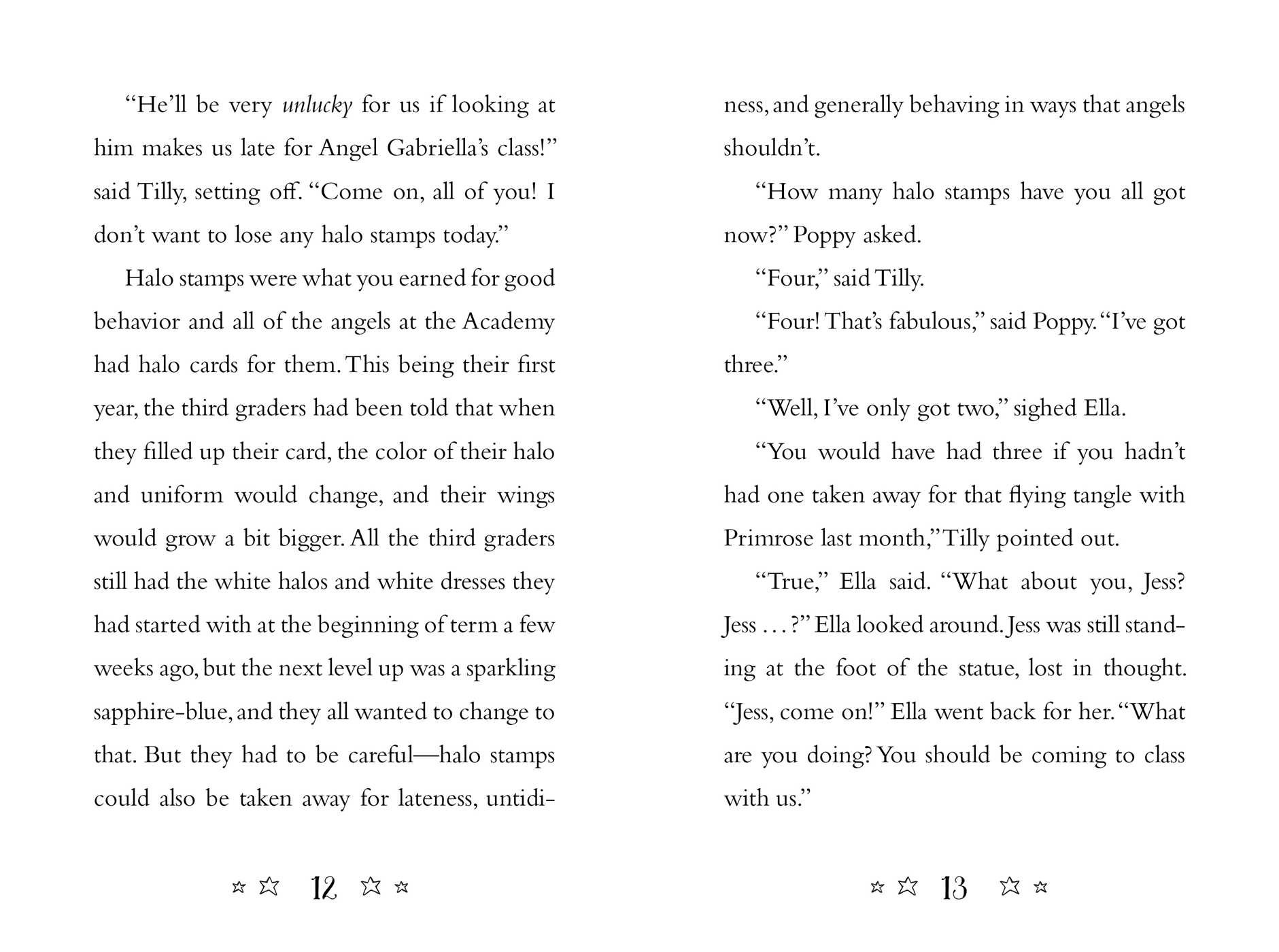 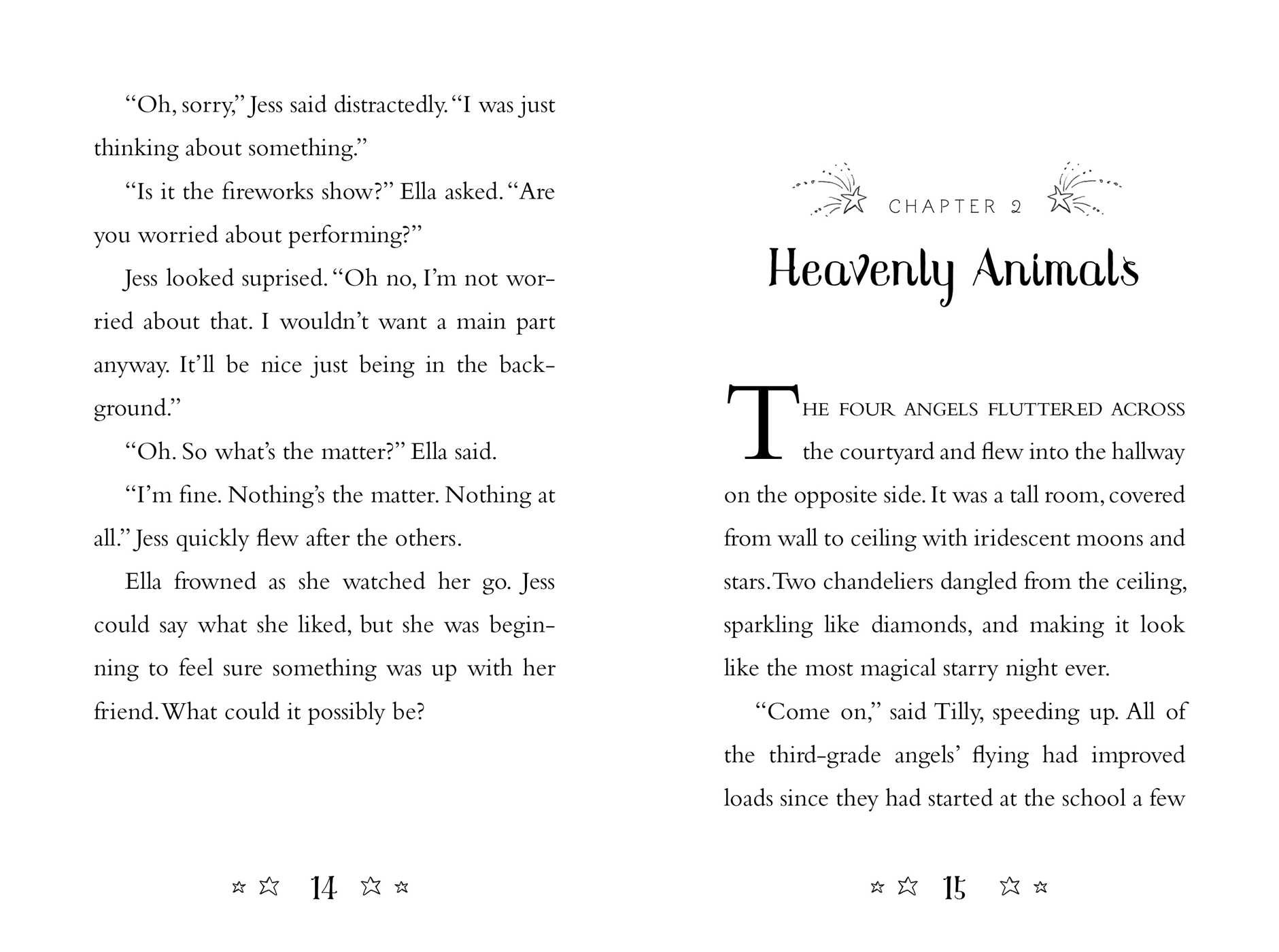 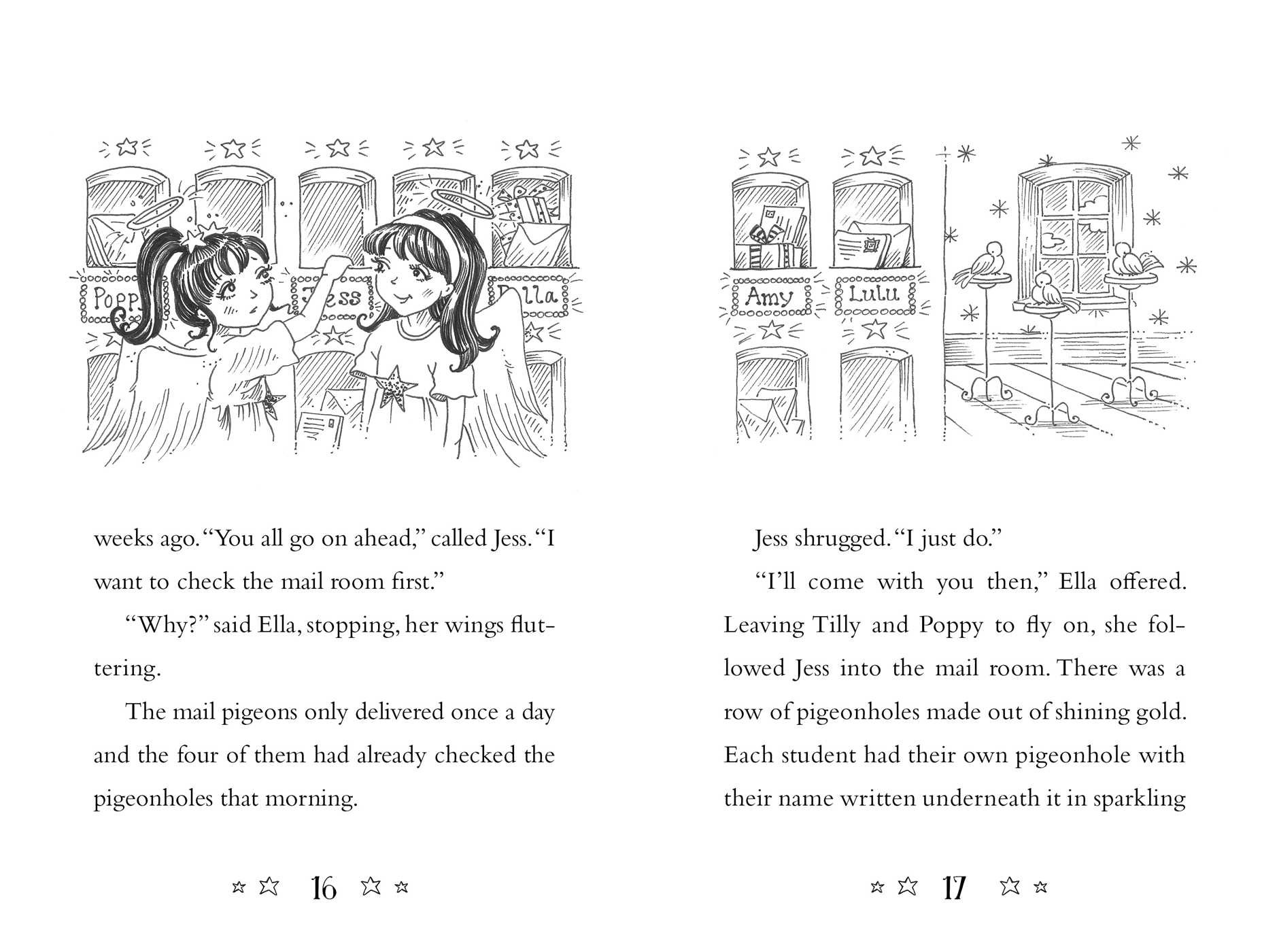 Join angel-in-training Ella and her friends on another magical adventure up in the clouds in the second book of the whimsical new Angel Wings series!

It’s Jess’s birthday, but instead of feeling festive, she is especially homesick. She waits eagerly for a birthday present to arrive from her family, but nothing comes in the mail.

Ella and her other friends want to cheer Jess up, so they plan to make a magical glitter bomb as a birthday surprise! But the surprise doesn’t go quite according to plan, and when Ella over-packs the package with glitter it makes such an explosion that it destroys a priceless statue at school!

Will Ella’s glitter-tastic accident get her expelled from Angel Academy?

Birthday Surprise CHAPTER 1 An Important Announcement
WHAT’S GOING ON?” ELLA BROWN fluttered down the spiral staircase at the Guardian Angel Academy, coming to land at the bottom next to her friend, Tilly. The hallway was crammed full of angels gathered around a sign, and excited chatter filled the air. Something was definitely happening!

“Come and look at this!” Tilly pulled Ella through the crowd. “Excuse me! Excuse me, please,” she said to the other angels until they reached the front.

The sign was glittery and sparkly and kept changing color. “The Guardian Angel Academy Third-Grade Fireworks Show,” Ella read aloud. “Friday the twenty-fifth of October. Oh, angel-tastic!” she exclaimed, pushing her dark brown hair behind her ears. “We’re having a fireworks show in three days.”

“I know!” said Tilly, her eyes shining. “It’s the day our parents come to take us home for the midterm break.”

Tilly read the words. “All third-grade angels will be expected to take part in the show.”

Ella caught her breath. “So we’re all going to actually perform in the fireworks show?”

“Yes, indeed,” came a voice from behind them. Everyone swung around. Angel Seraphina, Ella and Tilly’s class tutor, was standing there. “Every third-grade angel will get a turn at carrying the different lights through the sky, and the very best angel will get a starring role in the finale.”

“That would be really scary,” said Tilly, her eyes wide.

“It would be amazing!” said Ella, imagining everyone watching her as she swooped and dived, setting off fireworks in the sky.

Ella turned to Tilly. “I’ve seen a fireworks show before, but to actually take part in one—maybe have the main part—wouldn’t that be totally glittery!”

“I wouldn’t get too excited, Ella Brown,” came a haughty voice from behind them. “It’s not likely you’ll get the starring role, is it?”

Ella turned and saw Primrose standing there. She was the most annoying angel in the whole school. With her sparkling blue eyes, and pretty blonde hair curled into ringlets, she looked perfectly angelic—but she so wasn’t.

Ella felt Tilly shrink back—Tilly hated arguments—but she wasn’t scared of Primrose. “And why shouldn’t I get the starring role?” she demanded.

“Didn’t you hear what Angel Seraphina said?” Primrose nudged the angel standing beside her, who had red hair and giggled when prompted. “Only the best angel will get the starring role. And one thing’s for certain—you definitely don’t fall into that category.” Her eyes swept snootily over Ella. “All you’re best at is getting into trouble!”

Ella put her hands on her hips. “You’ve been sent to the Sad Cloud as often as me, Primrose.”

“Ella, don’t get into an argument now,” Tilly pleaded, tugging her arm. “You heard what Angel Seraphina said—everyone will get to take part in the show. It doesn’t really matter who has the starring role.”

“Come on, Veronica.” Primrose turned to her friend. “We’ve got better things to do with our time than stand around talking to troublemakers like Ella.” And with that she flounced off.

“Right! That’s it!” Ella sprang after her.

Tilly grabbed her. “No, Ella! Ignore her. She’s just trying to make you mad so you get into trouble.”

Ella stopped herself. Tilly was right. Primrose loved to make her lose her temper—usually when there was a teacher around. Angels were never supposed to lose their temper. It said so in the handbook that all the third-grade angels had been given a copy of. “All right, I won’t go after her,” said Ella, “but she is just so annoying! I hope she doesn’t get the starring role in this show.” And I hope I do, she added to herself.

“Forget Primrose,” said Tilly. “Let’s find the others and tell them all about the fireworks show.”

Ella and Tilly hurried outside into the courtyard, where they found Poppy and Jess, their other two best friends, sitting underneath the marble statue of their founder, Archangel Emmanuel. Jess was bouncing a ball back and forth against a wall and they were sharing cloudberry cookies, their white halos gleaming in the sun. Archangel Emmanuel had been sculpted in full song, mouth open, eyes wide. It was one of Ella’s favorite statues in the school grounds.

“Where have you two been?” Poppy asked. As usual, her curly blonde hair looked like a bird had been nesting in it and the rest of her looked just as messy—her white dress even had a splotch of sauce from breakfast! Jess was much neater—her dark hair was tied back in a ponytail, and her uniform was clean.

“We’ve been finding out something very exciting,” said Ella. “Now,” she pretended to tease, “shall we tell them, Tilly? Or shall we not?”

“Only performing in a fireworks show!” Ella exclaimed. She quickly explained about the sign.

“Just think how totally sparkly it will be to take part in a fireworks show,” enthused Tilly.

“Yeah . . . yeah, sure it is,” muttered Jess. Ella frowned. Jess didn’t sound that excited. But then Jess was kind of shy—maybe she didn’t like the idea of performing in front of everyone.

Before Ella could ask her if that was what it was, the school bell rang. “Time to go,” said Tilly, pulling Poppy up. “We don’t want to be late for class.”

A bluebird who had been circling around the head of the statue swooped down and pecked up the crumbs from their cloudberry cookies. His coat shone in different shades of indigo and turquoise and his dark eyes sparkled like jewels.

“Look at him. Isn’t he beautiful!” said Tilly.

“Bluebirds are supposed to be lucky,” commented Ella.
Michelle Misra

Michelle Misra has written many stories for kids, including the Magic Ballerina, Battle Champions, and Wild Friends series. She lives in London, UK, with her family.