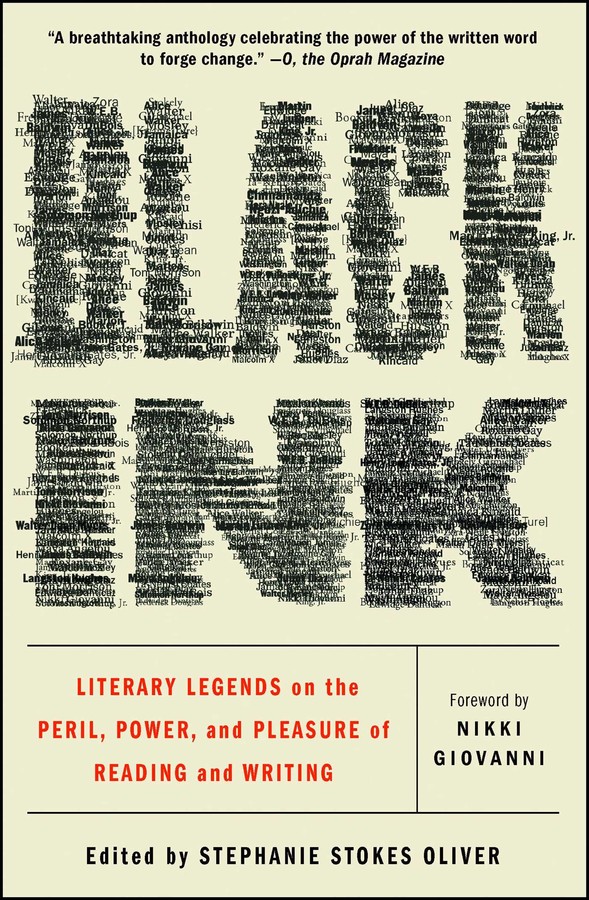 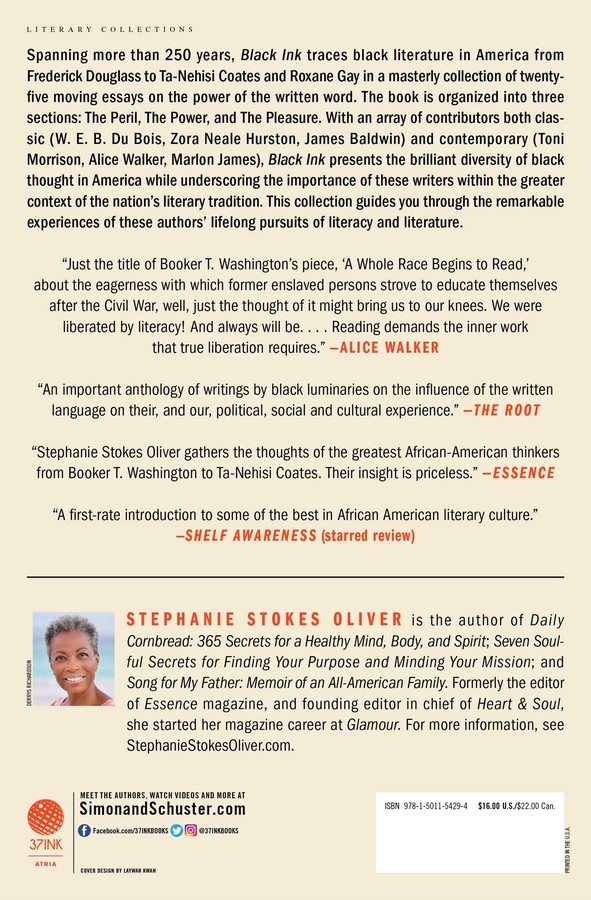 Literary Legends on the Peril, Power, and Pleasure of Reading and Writing

Spanning over 250 years of history, Black Ink traces black literature in America from Frederick Douglass to Ta-Nehisi Coates in this “breathtaking anthology celebrating the power of the written word to forge change” (O, The Oprah Magazine).

Throughout American history black people are the only group of people to have been forbidden by law to learn to read. This expansive collection seeks to shed light on that injustice, putting some of America’s most cherished voices in a conversation in one magnificent volume that presents reading as an act of resistance.

Organized into three sections—the Peril, the Power, and the Pleasure—and featuring a vast array of contributors both classic and contemporary, Black Ink presents the brilliant diversity of black thought in America while solidifying the importance of these writers within the greater context of the American literary tradition. “This electric and electrifying collection of voices serves to open a much-needed window onto the freedom struggle of black literature. It’s a marvel, and a genuine gift for readers everywhere” (Wil Haygood, author of The Butler: A Witness to History).

Yolande Cornelia “Nikki” Giovanni grew up in Cincinnati, Ohio, and spent her summers with her grandparents in Knoxville, Tennessee, where she was born in 1943. Giovanni graduated with honors from her grandfather’s alma mater, Fisk University. A world-renowned poet, author, commentator, activist, and educator, Giovanni has published volumes of poetry, nonfiction, essays, and children’s books.

She gained initial fame in the 1960s, as a leading voice of the Black Arts Movement, in the time of the civil rights and Black Power struggles. Awarded seven NAACP Image Awards, she has been nominated for a Grammy and was a finalist for the National Book Award. Since 1987, she has served on the faculty of Virginia Tech, where she is a university distinguished professor.

Giovanni’s literary greatness is on par with the twenty-five legendary writers included in this anthology. In the following foreword, she has graciously shared her own experiences in the tradition of the narrative of the book. She also sets the stage for what precedes the era of these writers in America—the horrific journey of the Middle Passage. While few of us ever think of it, overcoming language differences among the captured enslaved and then subsequently learning American English were among the first miracles along the path toward Black authorship as we know it today—from the peril of education to the power of literacy and then the pleasure of literature. First a moan, then a song, now a book.

“Black writers have used writing and reading to create, find and sometimes save their lives. Stephanie Stokes Oliver invites the reader into a black magic circle of  incendiary, replenishing and inspiring ideas, memories and meditations on the power of literacy and imagination by the writers we treasure. It was a pleasure to re-read established classics and discover new classic arguments for the power of the written and read word.”

"Just the title of Booker T. Washington's piece:  'A Whole Race Begins to Read' about the eagerness with which former enslaved persons strove to educate themselves, after the Civil War, well, just the thought of it, might bring us to our knees. We were liberated by literacy! And always will be. If Douglass and Washington and others had neglected to learn to read we might still be enslaved. Which should remind us today that television isn't the same as reading. Reading demands the inner work that true liberation requires."

“This electric and electrifying collection of voices serves to open a much needed window onto the freedom struggle of black literature. It’s a marvel and a genuine gift for readers everywhere.”

– Wil Haygood, author of The Butler: A Witness to History

"Stephanie Stokes Oliver pulls together African American literary giants who seem to make literacy something that should be in bold neon letters. Indeed, the essays you’ll find in here will make bookworms want to stand up and cheer."

"Imagine an intimate, fiery conversation between Frederick Douglass, Roxane Gay, and Barack Obama, in which reading is extolled as among 'the first miracles along the path to Black authorship.' A breathtaking anthology celebrating the power of the written word to forge change."

“A tantalizing sampler of 25 brilliant black U.S. writers from 1845 to the present… Black Ink is the sort of book that opens doors to other books…a first-rate introduction to some of the best in African American literary culture.”

"...an inspiring anthology of excerpts from books and essays by 25 black icons on the dangers and joys of education."

"An important and long overdue project... An essential collection for readers and students of black history and literature."

"Black Ink presents the brilliant diversity of black thought in America while solidifying the importance of these writers within the greater context of the American literary tradition."

"An important anthology of writings by black luminaries on the influence of the written language on their, and our, political, social and cultural experience."

"...a collection of great literary essays."

"If you have loved ones that cherish words, get them a copy of Black Ink...Stephanie Stokes Oliver gathers the thoughts of the greatest African-American thinkers from Booker T. Washington to Ta-Nehisi Coates. Their insight is priceless."

Literary Legends on the Peril, Power, and Pleasure of Reading and Writing