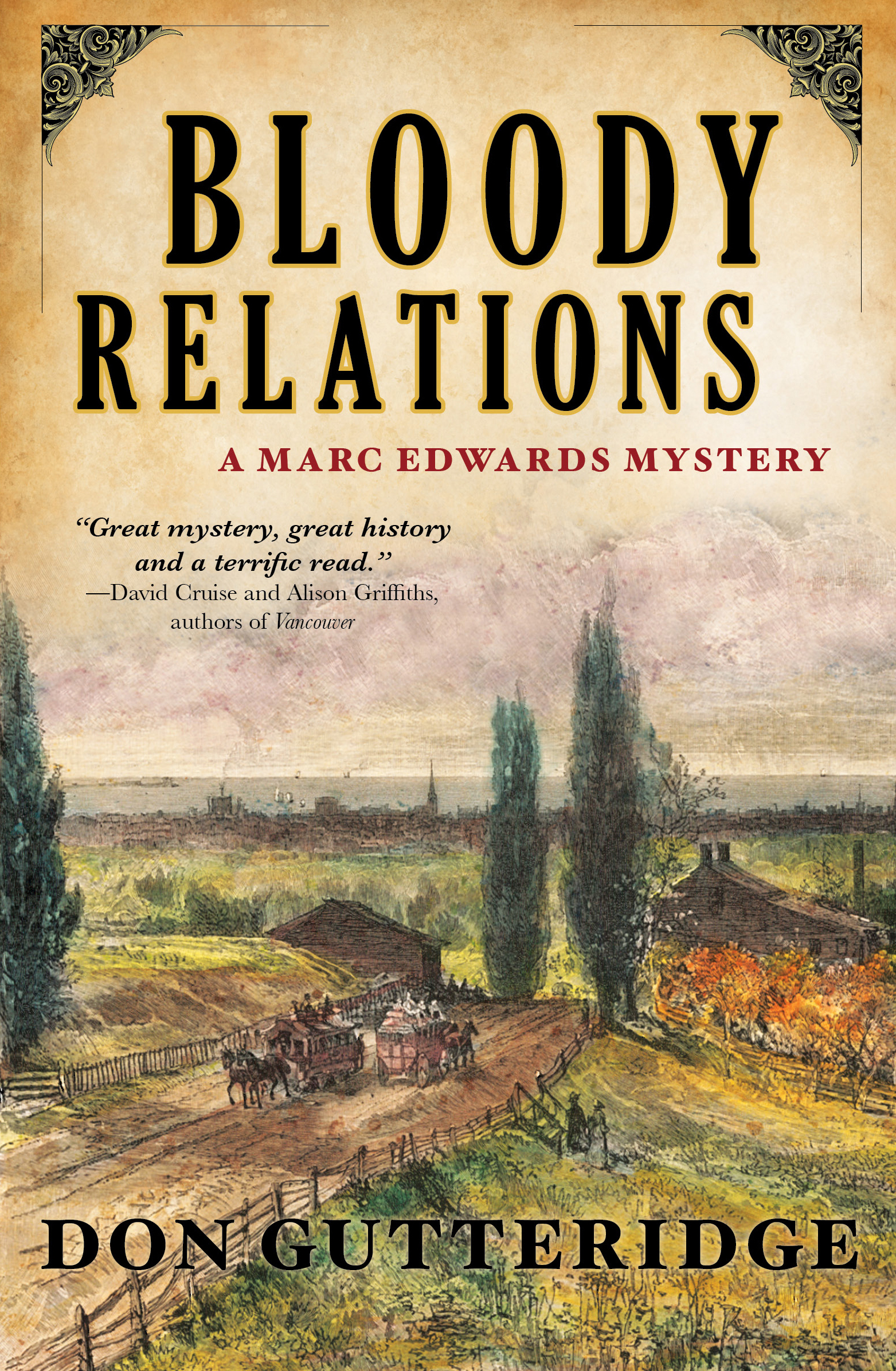 It is July of 1838, and an uneasy peace hangs over Upper and Lower Canada. The provinces have suffered two rebellions, and the unresolved grievances of the local population still linger beneath the fragile calm. Britain has finally taken note of the situation, and Lord Durham is dispatched as the temporary commissioner of both colonies, tasked with finding a resolution among the disputing factions.

To Marc Edwards the new appointment signals an opportunity to unite the country for which he has long fought. But when Lord Durham’s nephew is discovered in bed beside a dead woman, the murder weapon in his hand, it seems as though any hope for progress is lost. Unwilling to jump to conclusions, Marc soon finds himself embroiled in the investigation that ranges from Toronto’s elite mansions to its most violent slums.

With the fate of a country resting on his search, Marc races to uncover the truth behind the murder before time runs out. As Marc and police constable Horatio Cobb thread their way through the political backrooms and seedy barrooms of the city, they will come face-to-face with the desperation embraced by those who have nothing—and everything— to lose.

Don Gutteridge’s Marc Edwards series is a vivid portrayal of Canada struggling to find its identity and autonomy, and in Marc Edwards readers will see the courage and integrity that helped to give birth to a country.

I was happy to hear that you’ve almost wound up Uncle Jabez’s affairs and the settling of his estate. No doubt you are looking forward to your return to France and the bosom of your family. That they are all healthy and thriving must provide you with some consolation during this period of mourning for your brother.

As you know from my previous letters, a number of which likely arrived simultaneously in April—the mails here are as unreliable as the roads—my life since last October when the troubles began has been both hectic and harrowing. Thus it is only in the past two months, since my marriage to Beth, that I have had time to reflect on what now seems “my other life” in England and the role that Uncle Jabez played in it. I miss him more each day, and have long ago forgiven him for his faults, as he was kind enough to overlook or indulge mine. His generous annuity on my behalf is more than I deserve. I wish to thank you for arranging its transfer to my bank here in Toronto. As you know, Beth inherited money and property from Joshua Smallman, her father-in-law, so we are well situated financially.

That being so, you may wonder at our purchasing a “cottage” here in town rather than a “residence,” or even having one built to our specifications and fancy. In fact, Briar Cottage suits us both just fine. For the moment there is only Beth, me, and Charlene Huggan, a young woman whose sisters have gone off to homestead in the Iowa Territory. Charlene is our “housekeeper” (the local term for an all-purpose female servant). Should our ménage expand, as I devoutly hope it will, we shall add additional rooms on the back of the house. We have better than half an acre of land, minuscule by the standards of the English gentry, but that is sufficient for a considerable vegetable garden and a coop full of chickens. There is a small barn as well, which will shelter a carriage horse before summer.

You will be surprised to hear that Beth looks after the garden herself (she ran a farm on her own after her first husband died), with occasional assistance from a “hired man” (another localism) and her own husband. The latter, however, has been branded “hopeless” by his employer, who seems at a loss to explain how he could wield a sabre and dodge bullets (well, most of them) and yet be utterly inept with sickle and hoe.

You asked again about my war wound, and I am pleased to report that I have fully recovered. My stamina and physical strength are returned to their former “glory” and my limp is slight and barely noticeable. (It seems to worsen only when I am in need of an infusion of sympathy.) And thanks to the law books you were so thoughtful as to send, I have been exercising my mind once more. As you know only too well, I abandoned the solicitor’s inns for the life of a soldier with your timely assistance, and have never regretted doing so even though, for reasons I outlined in my last letter, I felt compelled to resign my commission. A life of petty, if profitable, conveyancing was not for me. However, the notion of becoming a barrister someday has its attractions. At any rate, the thought of such a career and the necessity of burrowing deep into the tomes of jurisprudence are enough to keep me out of trouble for the time being.

It is mid-afternoon on a July Monday as I write this. Just a few hours ago, one of the more memorable and happy events of the year took place, and I am eager to describe it to you while it is fresh in my mind. Down at the Queen’s Wharf this morning, more than a thousand citizens of every political stripe gathered to witness the arrival, from his stopover in Niagara, of Lord Durham, governor of all the British North American provinces, special envoy of Prime Minister Melbourne, and the man chosen by the Whig government to broker a lasting peace among the warring factions of Upper and Lower Canada.

The pomp and panoply were worthy of a monarch’s progress through his dominions. I have seen nothing more splendid or exquisitely intimidating at Hyde Park or more festive and convivial at Brighton racecourse! In front of the early-morning crowd at the wharf and behind them on the open ground above Front Street were arranged the colourful ranks of the King’s Dragoon Guards and the 43rd Foot (force-marched up from Fort George at Niagara) as well as our own 23rd from Fort York. The immaculate tents of the dragoons, who had bivouacked along the bay and the spit to the west, fluttered in an approving breeze.

Then, about ten o’clock, a blast of trumpets behind us proclaimed the sighting of sails beyond the southeast shore of the peninsula-cum-island that acts as a buffer for our beautiful bay. A huge hurrah went up. Even our most skeptical Tories are overawed by the “divinity that doth hedge” someone who’s hobnobbed with kings and czars. The schooner ferrying His Lordship then weighed anchor some leagues offshore. After an agonizing and well-judged pause, a longboat was lowered, soon to be joined by others from ships we couldn’t quite see, and the flash of oars in perfect unison left the throng momentarily stunned. They spoke to us humbled onlookers of the might and relentless precision of the British Empire.

As the band struck up a martial air behind us, the longboats came silently and with deliberate ease towards the end of the wharf, where an honour guard flanked Lieutenant-Governor Sir George Arthur and his liveried minions. When the leading longboat drew near, the oars flipped up as one and stilled. In the middle of the boat, a tall and majestic figure rose gracefully into view and posed for posterity. Neither it nor the impeccably dressed oarsmen moved again as the demi-royal craft floated on its own glamour towards the tip of the quay and, while the crowd held its breath, nudged the pier as softly and meticulously as a caress. Then the air reverberated with the thunder of a twenty-one-gun salute, during which Lord Durham put first one foot then the other upon Toronto soil, before extending a hand to Lady Durham and drawing her up beside him. I thought of Caesar putting a Roman toe upon the simple shingle of ancient Britain.

The effect of this gesture upon the Upper Canadian populace was, I am certain, a calculated one. Lord Durham—the man you know as Radical Jack at home—is in the eyes of the Tory Compact here a thoroughgoing Whig. They know about, and are appalled by, his “coddling” of the miners who toil for him in Durham, his permitting them to form workers’ associations, and his dastardly role in designing and carrying through the Great Reform Bill six years ago. They also keenly disapprove of his dismissal of the Tory Council in Quebec, his lenient treatment of the French rebels, and his even-handed attempts to sort out the various claims of grievance. Hence His Lordship seems to realize that a little pomp and ceremony and a reminder that he is after all a peer and a member of the “real” Privy Council will go some way towards cowing the local gentry and petty aristocracy. Indeed, the first affair of state will not take place at Government House but rather at one of our native “palaces,” Spadina House. Nor will it be a business meeting. At nine this evening, Lord and Lady Durham will play host to the town’s elite at the Governor’s Ball—gourmandizing and dancing till the wee hours! More on this in the next letter. Till then, I remain,

P.S. The only discordant note at this morning’s extravaganza, for me, was the appearance at Lady Durham’s side of a young gentleman who flinched at every cannon shot and bugle blast. My heart went out to him. When I asked who he might be, a man beside me said, “That’s Lady Durham’s nephew, Handford Ellice, and a burden he’s been to her ever since they come here.” Unfortunately for the curious, no more was said, but I subsequently learned that he is the son of the commercial adventurer Edward Ellice, a man with his own bold interests in our fair colony. Strange that his offspring should appear so timid.
Don Gutteridge

Don Gutteridge is the author of forty books: fiction, poetry and scholarly works. He taught high school for seven years and then joined the Faculty of Education at Western University in the Department of English Methods. He is now professor emeritus and lives in London, Ontario.

More books in this series: A Marc Edwards Mystery