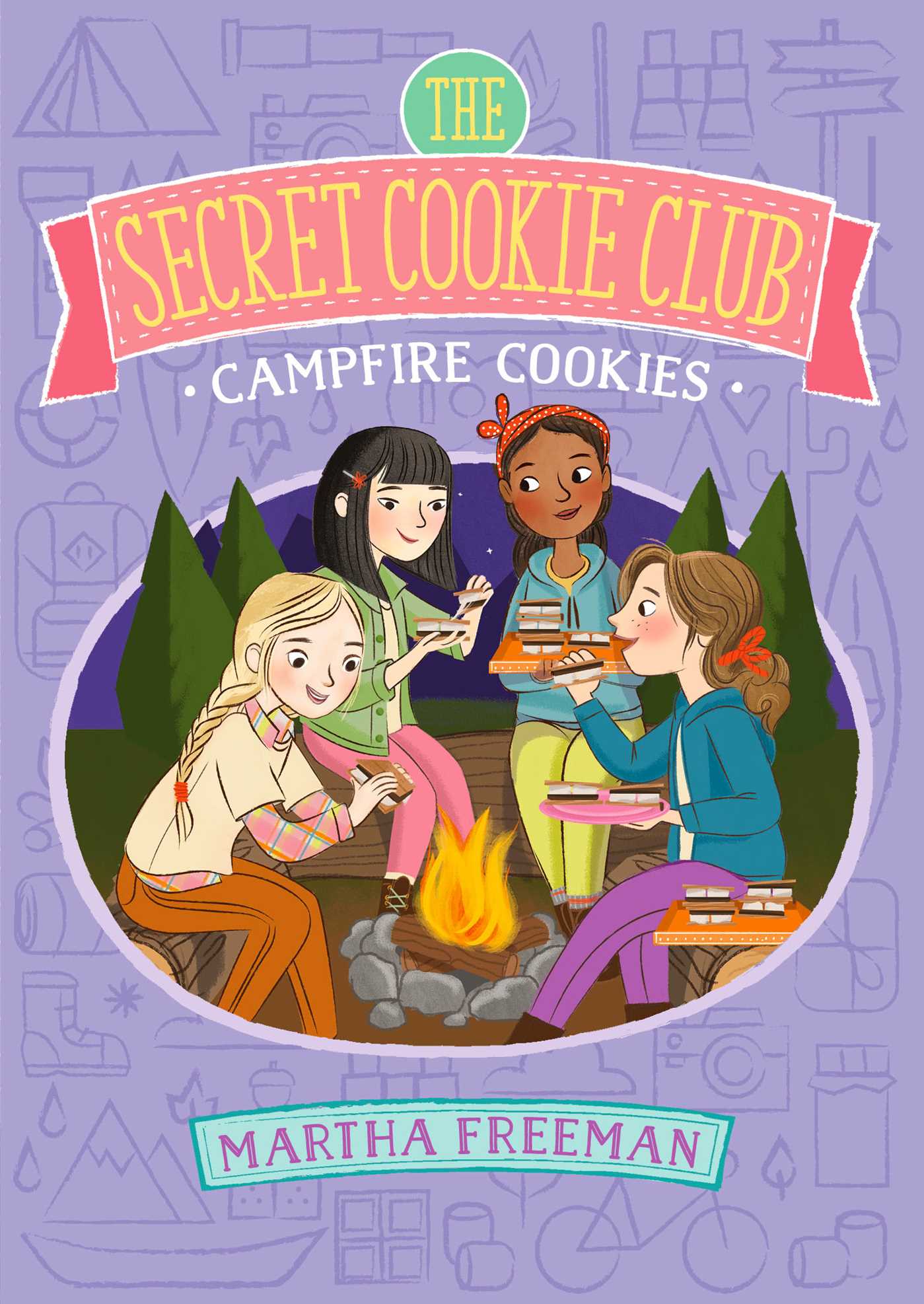 The girls from Flowerpot Cabin are back at camp in Martha Freeman’s second novel in the Secret Cookie Club series, which was called “a younger version of Ann Brashares’s The Sisterhood of the Traveling Pants” by School Library Journal.

The Secret Cookie Club members Grace, Emma, Olivia, and Lucy are excited to be back at Moonlight Ranch summer camp with their beloved counselor, Hannah. But when a mysterious letter arrives, Hannah is plunged into despair. Secret Cookie Club to the rescue!

After puzzling out the contents of the letter, they make a plan to fix Hannah’s life—a plan that requires a magic spell, a daring mission to the boys camp, and a big batch of campfire cookies. What could possibly go wrong? With a dash of romance, a pinch of mystery, and a heaping tablespoon of fun, this camp adventure is as satisfying as a warm chocolate chip cookie.


The scorpions, tarantulas, and rattlesnakes that live just outside the Moonlight Ranch main gate stay well out of the way on Camper Arrival Day, when the bare patch of ground they call home is overrun with human activity—cars pulling in and out, meetings and reunions, parents helping campers with heavy loads of luggage.

Scorpions, tarantulas, and rattlesnakes are shy and peace-loving creatures. They want nothing to do with so much action.

While a few Moonlight Ranch campers always arrive on their own by shuttle from the Phoenix airport, most drive in with their parents. That late-June morning, families began arriving at ten, and by ten forty-five, Hannah Lehrer from Long Island, New York, was having second thoughts about her decision to come back for a second summer as counselor in Flowerpot Cabin.

Beside her stood the reason for those second thoughts, Olivia Baron, a tall, striking eleven-year-old black girl with drama queen tendencies and a scary-good vocabulary.

Hannah knew Olivia well. Hannah had been her counselor the year before and had greeted Olivia with a big hug when she alighted from the SUV her parents had rented for the drive. After that, the two had chatted eagerly about the summer to come.

Purple Sage was another ten-to-eleven girls cabin, and Chore Score, the daily measure of how thoroughly cabins were cleaned, was a big deal at Moonlight Ranch.

Hannah laughed. “My friend Jane’s the counselor in Purple Sage again this year.”

“What about the campers?” Olivia asked.

“One returning, the others new,” said Hannah.

“I hope it’s not that Brianna girl coming back,” said Olivia. “She is stuck-up!”

“I don’t think so,” Hannah said. “Jane told me she’s coming on one of the airport shuttles. Can I help you, Mrs. Baron? That crate looks heavy.”

“It is! And thank you, Hannah.” Together they hefted the crate up and onto a handcart already piled with Olivia’s possessions. “What have you got in here, anyway, Livia?” her mom asked.

“That one?” Olivia studied it for a moment. “My backup iPad, my speakers, some batteries, some chargers, a game platform, controller, video monitor . . . and I think extra shoes.”

“Oh, dear,” said Mrs. Baron. “My assistant sent in the paperwork. What is it that I missed?”

Anticipating that some parents might need a refresher on the policy, the camp director had given each counselor a copy of the letter describing it. Now Hannah pulled out the letter, unfolded it, and handed it to Olivia’s mom.

More than half a century ago, my parents established a sleepaway camp at their beautiful working cattle ranch in central Arizona. At first the camp was a modest affair, but over time it has grown into the nationally renowned operation that you know so well.

My own Moonlight Ranch journey began when I was a boy barely old enough to flake hay. I have seen many changes in the ensuing years, one of which brings me to my point in writing to you today. Recently, our highly qualified and caring professional staff has observed that our campers, like young people the world over, engage ever more frequently with their electronic devices.

The result, in too many cases, is that campers physically surrounded by our beautiful and expansive environment are mentally buried in the same restrictive screen experience they could have in their bedrooms at home.

For this reason, we at Moonlight Ranch have decided to declare camp property an electronics-free zone for the upcoming summer. No electronic devices of any kind, including cellular telephones, will be permitted. If parents need to get in touch with their campers, they may call Paula in the camp office anytime, day or night. Likewise, campers urgently needing to contact parents will have access to Paula around the clock.

In addition, all campers will be expected to write at least one letter home per week. In the same spirit, parents may wish to reciprocate by writing cards and letters to their campers.

To minimize misunderstanding and ensure that summer gets off to a smooth start, a contract outlining the no-electronics agreement is enclosed for your signature.

Thank you for your understanding, and we look forward to another rewarding summer for your sons and daughters here with our livestock in the wholesome Arizona desert.

P.S. As always, if you have any questions, please contact Paula in the camp office.

Olivia read over her mom’s shoulder. As she did, her hand sought out the phone in the pocket of her shorts. By the time Mrs. Baron was done reading, Olivia was gripping her phone with white-knuckled devotion.

“I can’t live without it!” she cried. “My friends will forget I exist!”

“Oh, darling. I am sorry,” Mrs. Baron said. “I should have read this before. But don’t you think it might be a nice idea to go a short while without all your gizmos? I wish I could give that a try.”

This comment did not help matters. In fact, it catapulted Olivia into full-on drama queen mode. “A whole summer is not a short while!” she wailed. “You don’t understand anything!”

It was then that Hannah questioned her decision to return to Moonlight Ranch.

To keep from saying something she’?d regret, Hannah turned and looked across the desert. In her mind’s eye, she saw the marble-lined corridors of the New York museum where she could have worked that summer, the dresses and high heels she??’d be wearing, the weekends at the beach with her friends.

And she saw the best part of this parallel summer, her new boyfriend, Travis. He was the first real boyfriend she had ever had.

What am I doing out here in the middle of nowhere? she thought. The sunshine is too bright. The air smells like dust and horses. My new jeans scratch, and my boots are heavy. My face feels sticky with sweat and sunscreen.

To top it off, I’m arguing with an eleven-year-old!

Hannah sighed and mentally shook herself. This was the summer she had chosen. It was time to step up.

“Olivia?” She looked back at her camper. “During camp, your social life is here, and no one else has a phone either. Sorry, but you’re going to have to leave that crate behind. And hand over your phone, too.”

Slam! Olivia’s dad closed the hatch of the SUV and turned to Hannah, smiling. “Whoa,” he said, then, “Livia”—he looked at his daughter—“I think you might have met your match.”

Olivia’s dad was George Baron of Baron Barbecue Sauce, a staple on the shelves of every grocery store in America. His and his wife’s faces were even on the label. On the scale of Moonlight Ranch celebrities, the two of them were right up there with Brianna’s mom, Natalya Silverbug, a former model who now sold a high-tech brand of dust mop on a shopping network.

Olivia folded her arms across her chest and set her jaw. She looked ready to do battle for her right to keep her phone. Then, all of a sudden, she backed down. “Oh, all right, fine.” She pulled the phone from her pocket and handed it to her mom. “I guess I can live without it for one summer. It’ll be good for me, right?”

Hannah wondered what had caused Olivia to change her mind so abruptly—but she was too grateful to say anything.

Mrs. Baron looked surprised too, but then recovered. “Exactly,” she said, “and writing letters is fun. I’ll send you some stickers to make them pretty, and some markers if you want. How would that be?”

Olivia’s father shot Hannah a look that said thumbs-up. At the same time, a voice came from across the parking area. “Hannah! Over here!” 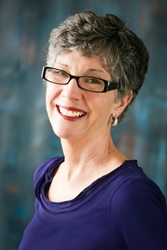 Martha Freeman worked as a reporter and teacher before becoming a full-time writer of books for young readers, including the Edgar Award­–nominated Zap!, Born Curious, The Secret Cookie Club series, Who Stole Halloween?, and Effie Starr Zook Has One More Question, which School Library Journal called “accessible and exciting” in a starred review. She also collaborated with NASA astronaut Mark Kelly on the Astrotwins books. Martha lives in Colorado. Learn more at MarthaFreeman.com.

More books in this series: The Secret Cookie Club