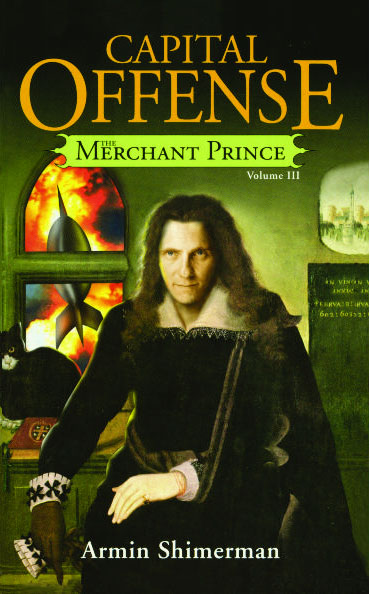 I was born on the thirteenth day of July in the eighteenth year of the reign of His Glorious Majesty Henry VIII, in the one thousand five hundred and twenty-seventh year after our Lord's death. I had the great good fortune to be born an Englishman, and when I came of age in both knowledge and reason, I served my country and my queen, Elizabeth Regina. Trapped by the Medici, I was condemned as a heretic and a spy, walled up alive, condemned to die for queen and country. Instead the hand of Fortune swept me up and I was spared.
It is now the eighteenth day of March in the year 2101, and I am as trapped as I was in Venice. Fortune's servant, Dyckon, a creature called the Roc -- who by his very countenance calls forth the living visage of the Dark Ones -- swears he will find a way to send me home, to my time, my place, my queen. But the forces of this time and place rage against me as surely as did the Medicis. Others of Dyckon's race even now look to wipe clean the face of the planet of every human. The powers of this time plot to subjugate me with their horrible machine -- an identity chip. And if these powers were to find out that I was in league with the Roc, I would be condemned.
It will take all the skills I learned as a spymaster to keep me free, to stop the Roc, and set me on the path to home.

THE SPELLBINDING CONCLUSION OF THE SAGA OF THE MERCHANT PRINCE, DOCTOR JOHN DEE.

Unhappy, John Dee sat in his straight-backed wooden chair on a terrace of his upper-floor bedroom. He marveled at the view: a vast panorama of Metropolitan London. The city was unrecognizable to him. It had grown so tall and so uninviting. The sun turned the clouds the color of diseased fruit, and the pall the light cast over the smoking expanse of buildings was enough to sour anyone. That, Dee supposed, included him. He had stayed in his hilltop aerie at St. Albans for three months, but he knew that he was not accomplishing half of what he had set out to do. He needed to find the other Roc to put an end to any threat of worldwide plague. The Roc might also be the key to Dee's going home. Back to a time when London was manageable. He ached to go home. The village of Mortlake was only six kilometers away, but it was no longer a village and it was no longer home.

"Doctor," called Kelly Edwards from the kitchen. "Do you want some lunch?" Under the guise of providing him protection, she had shared living quarters with him since he had arrived in London, and their relationship was developing into something more than either of them had expected -- not a romance so much as a fond symbiosis.

"What are you offering?" he asked as he came in off the enclosed terrace, one brow raised suggestively. The terrace was shielded by spiderglass; it was impenetrable.

"Sprouts and technomeat in basil sauce," she said, smiling at him. She was dressed in a neat jumpsuit with three weapons clipped to the belt. A year ago, Dee would have found this military mien unfeminine and off-putting, but now he saw her as attractive and wholly female. His redheaded Brünnhilde. He came up to her and kissed her cheek. "What's news from d'Winter?"

"Nothing today. He's still looking for the Roc you think must still be here," she said. "But even though Rocs work in groups, isn't it possible that the Yeshua Roc was some kind of loner?"

"Dyckon was not of that mind," said Dee. "He is as certain as I that an attendant Roc must be in hiding on this planet. Waiting." Dee remarked as he took the plate and sat down on the kitchen stool in front of the counter. "Is there naught to drink?"

"Tea and wine. The wine's Romanian." She had gotten down glasses. "I'm having the wine."

"As shall I," declared Dee, and accepted a glass filled with a pinot noir. He lifted this in toast to her and began to eat.

Kelly took the stool opposite his and launched into her lunch. "Anything planned for this morning?"

"I am to be engaged in diverse research," he said obliquely.

"Can I help you with it?" She waited a moment, then added, "I'll have to stay with you, in any case. You might as well keep me busy."

"Marry, then," said Dee. "You will needs come with me to the British Museum at its Montague Street entrance. The museum guard will bar your coming unless you accompany me. I am possessed of a research pass which will grant admittance to me and my assistant, but only if we arrive at the scholars' door at the same time."

"I'm your bodyguard, Doctor," Kelly pointed out as she took a sip of her wine. "I have to remain with you."

"For which I praise my stars and am grateful." He paused. The visit to the museum reminded him of lost opportunities. "I would have greatly desired to have had so majestic a collection in my time. It is the eighth wonder of the world." Dee swirled the wine and watched the liquid languidly slide down the curved glass. "I made petition to the court of Elizabeth to give me leave and a royal grant to pursue just such a scholarly enterprise. To gather the lost works of scientific antiquity." The Doctor grew more wistful, "Such a preservation of monuments and antique writers would have made England the envy of the world. But alas, it was not to be." He shook his head resignedly. After the reckless post-Reformation looting of Catholic property, he had been forced to spend years of time and much of his own money to gather books of ancient learning that had been foolishly discarded by an angry populous. Doctor Dee was reputed to have once had the largest library in Britain. Scholars from all of Europe and Asia came to stand in awe and admire his wealth of mathematics, astronomy, and the mystical occult. "Acquistion of knowledge was my quest and true understanding my prize. Burghley and Elizabeth never saw the country's need."

"Aye, the First," Dee chuckled, and added, "I am still at pains to think of her that way."

"I would be too, in your shoes," said Kelly with a burst of sympathy that made him feel awkward. Continually, he strived to seem informed on the six centuries of history he had missed. To his surprise, he found that only the world changed, not the passions of men.

"By my soul, although I would with all my heart return to her realm, I should miss you, and the creature comforts of this time." Dee busied himself with his food for the next ten minutes. "How long before you'll be ready to set forth?"

"That depends on you, Doctor," said Kelly. "What kind of protection do you need for the museum?"

"As is my wont," said Dee. "You or Callaghan, light arms you're licensed to carry, as we've done before. I have my suit."

"This is Callaghan's day off," Kelly reminded him.

"So 'tis," said Dee. "Perchance he has returned to Limerick for the day?"

"He has," said Kelly. "He's getting worn out, you know. Ever since we brought him on ten weeks ago, he's only had four days off. That's barely legal, and really expensive."

"Oft have I desired you to employ another sentry while d'Winter's abroad, if you deem it wise," said Dee. "You don't have to saddle all on Callaghan. So long as my true identity remains a secret."

"We'll get someone" she said. "We need to do a thorough check on anyone assigned to you."

He stopped short of asking her why, knowing that she hadn't told him because she wanted to protect him. The thought bothered him slightly, and he absentmindedly asked again, "How long before we depart for the museum?"

"Twenty minutes, if that works for you," she said. "I have to secure the place and summon our private skimmer."

"What you will," he said, resigning himself to the long security check on the house. "Will you repair to secure the roof, or shall I?"

"I'll do it," she said. "You can shut down the record-room, and pack any notes you're going to need."

"Will do," he said, astonished at how much of the modern parlance had crept into his speech in the time since he had arrived in this century. Still, he reminded himself, he had often acquired local regionalisms on his travels in his own era, so there was no reason to be surprised.

"Then off you go," she said, checking her sidearm as she put their lunch dishes into the cleaner. She watched him leave the room, thinking as he went that she was too much involved for her own good -- or for his. She finished cleaning the countertop, then took the spiral stairs to the roof where there was a long railing around the hydroponic garden, all but isolating the place like an island.

The roof made her nervous; it was too exposed. All that would be needed to breach it was a flyer and hand weapons. This alone made her very careful while she checked all the monitors on the roof, turning them up to their highest settings. As she turned back toward the stairs, she heard one of the surveillance units shriek a warning, and she ducked. An instant later the primrose next to her left shoulder disintegrated. The guard-beams were already swinging around in the direction from which the shot had come, their lasers poking into the air in the direction of a flyer that abruptly banked away from behind the belltower of a nearby cathedral.

Securing the roof door, she hurried down the stairs, trying to figure out how much she should tell Doctor Dee. At the base of the steps, she armed all the protective programs to fire their various weapons upon intruders. Adeptly, she ran a check on all the exterior windows and the recording devices that would keep visual files on anyone who approached this tall, narrow house on Tower Hill. Lastly she punched in the code on her wrist-vid to bring their flyer to the door.

"I've got my notes," said Dee, coming up behind her with an old-fashioned attaché case.

"You're not taking your palmtop?" She decided to say nothing about the shot on the roof.

"Harp not on that matter again," he retorted sharply. Immediately, he was slightly embarrassed by his strong admonition. They had had this discussion before. It was one of the few times they had argued. "They can be spied on too easily."

"Only by someone who has the right codes," she gently reminded him as they started toward the door. She felt him bristling at her side.

"That's enough to give me pause," said Dee as they ran out to the extended porch to meet the incoming flyer.

Armin Shimerman is an American actor and author known for his work on Star Trek: Deep Space Nine and Buffy the Vampire Slayer. He is from New Jersey and studied at UCLA.