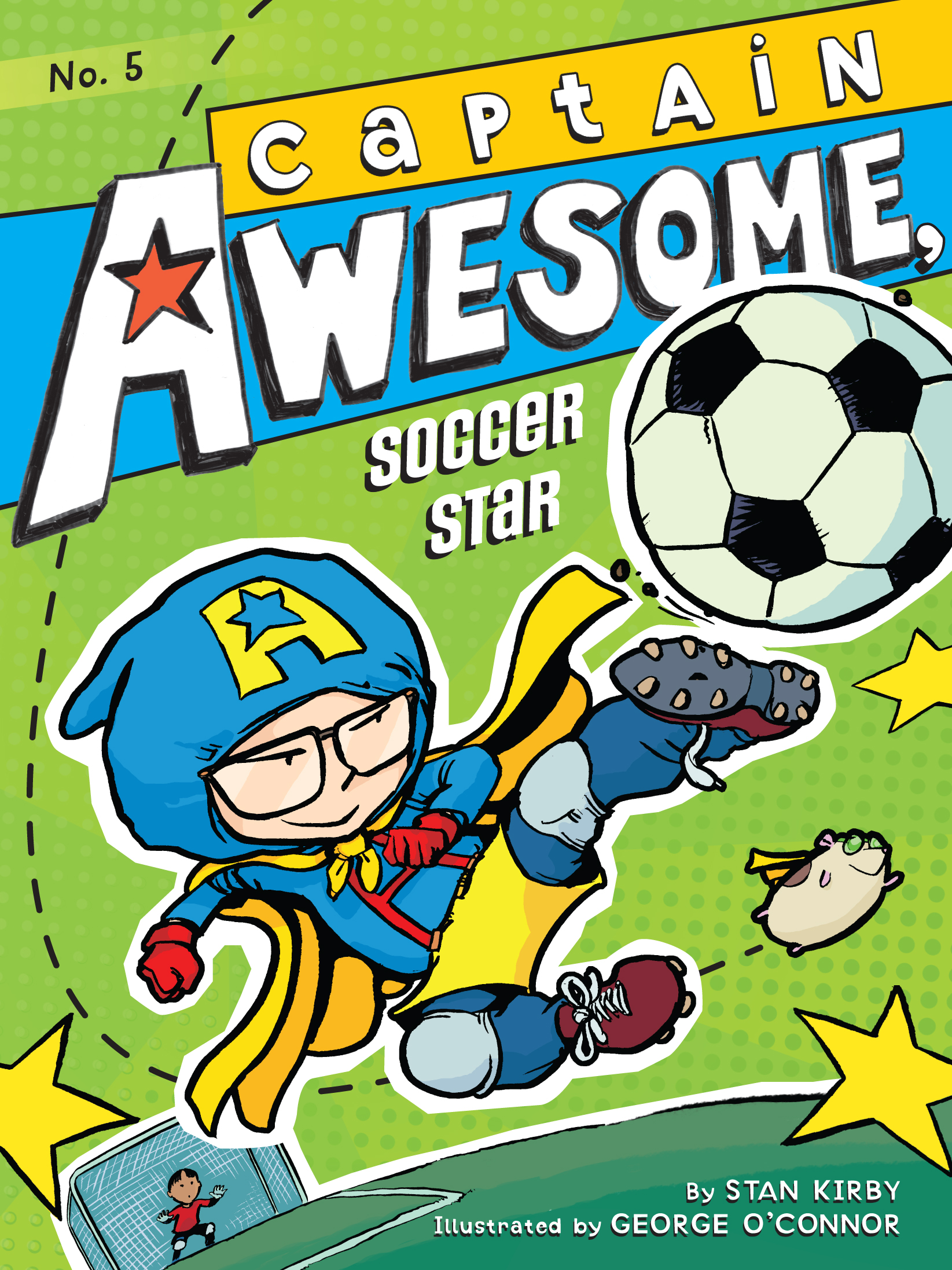 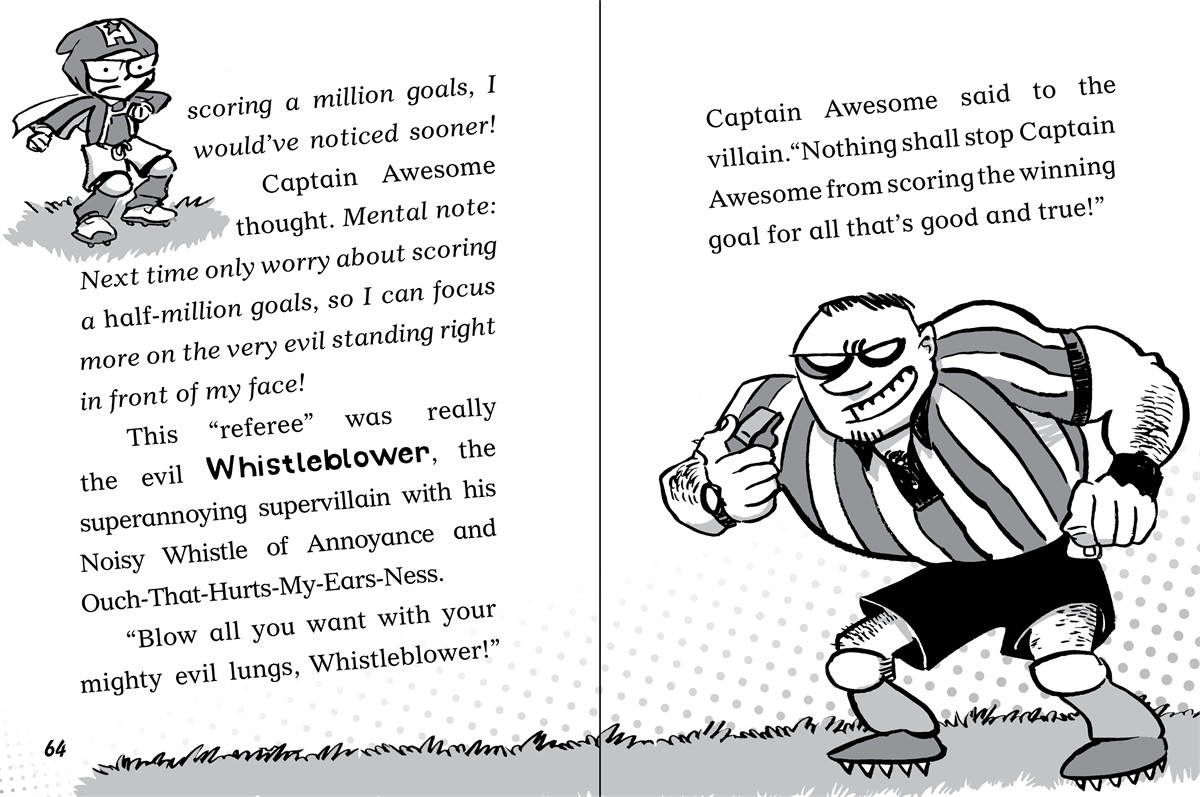 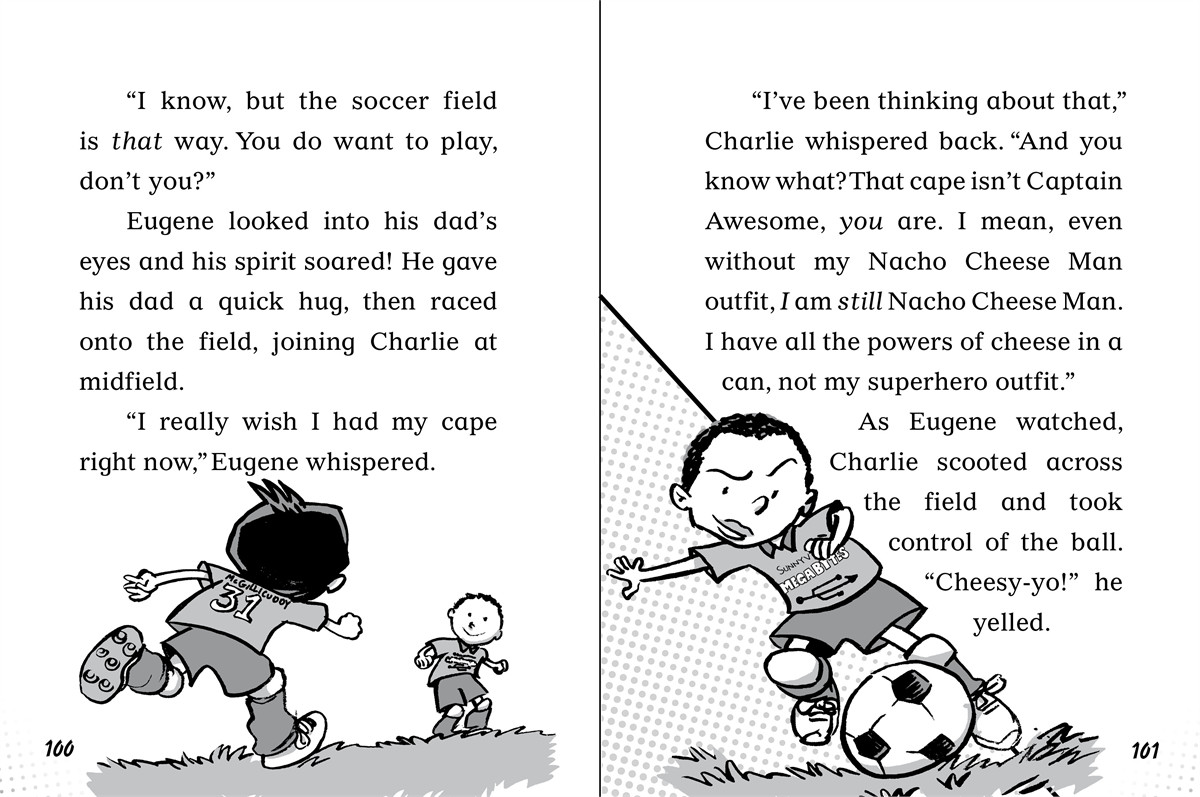 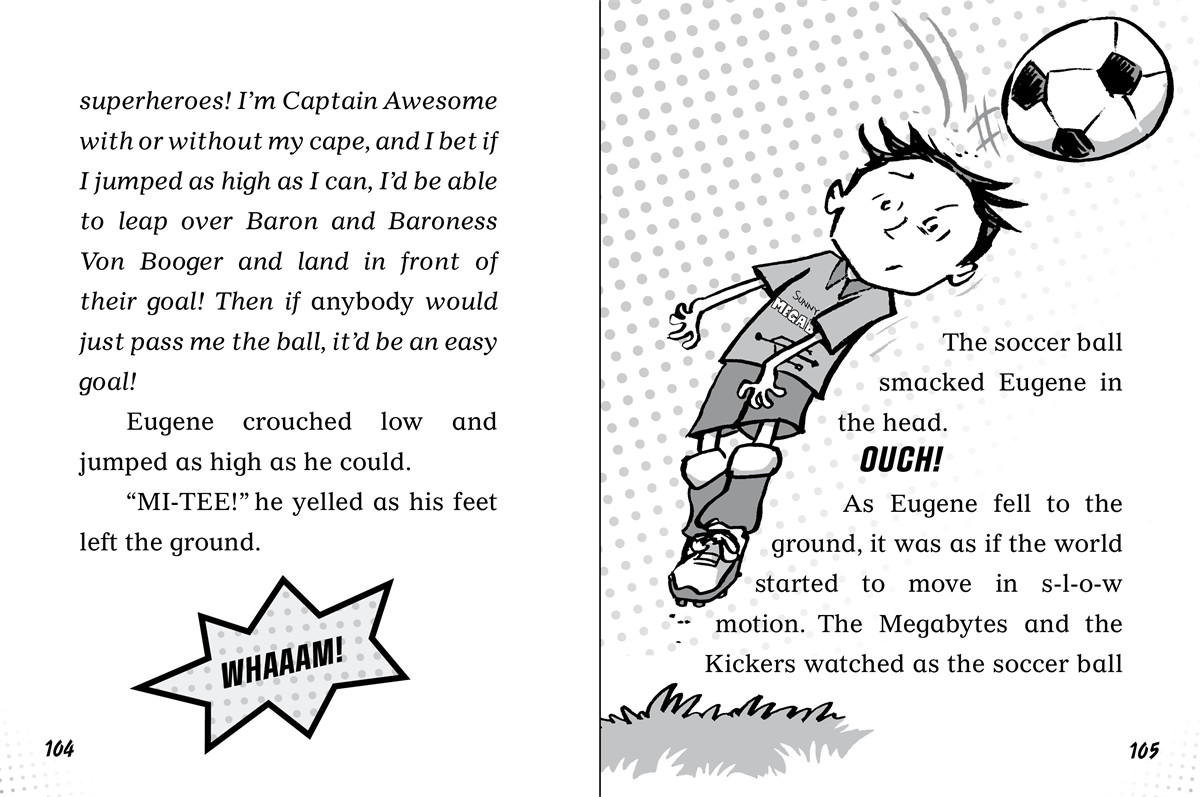 It’s soccer season in Sunnyview and Captain Awesome and Nacho Cheese Man are ready to play! All superheroes are spectacular at sports...right?

Eugene McGillicudy and Charlie Thomas Jones can’t wait to join Sunnyview’s eight-year-old soccer team. These superhero pals have no doubt that they will lead the team to victory. MI-TEE!
But when Captain Awesome’s (aka Eugene’s) soccer skills prove to be less than super and his dad decides to coach the team, Captain Awesome starts to wonder if the Sunnyview Megabytes have what it takes to defeat the Westville Kickers.
With easy-to-read text and illustrations on almost every page, the Captain Awesome chapter books are perfect for beginning readers!

Is there a worse name for a season than “fall”? Eugene McGillicudy thought as he walked home from Sunnyview Elementary School where he had just escaped from second grade.

Fall. Who names a season after an accident? Are there other seasons called “trip” or “crash” or “oops”?

So why name it “fall”? Is it really because the leaves are turning color and falling off the trees and that snow might soon be falling from the sky?

Whatever the reason, it is certainly better than “autumn.” I’d bet no one even knows what that word means, Eugene thought.

Fall was the most boring, BORING, BO-RING time of year between the start of the school year and winter break—a time when NOTHING happens.

Oh sure, you can say that there’s Halloween, but that’s really only for one day and sometimes it rains. Thanksgiving? What really happens on Thanksgiving besides a lot of eating, falling asleep in front of the television, and having to listen to wrinkly old relatives say, “Oh, my! Look how big so-and-so has gotten!”

So yeah, there’s nothing.

I’m under attack! Eugene thought and dove for cover behind a tree. But who could it be?!

“Ouch!” Something bounced off of his head again.

“Curse you, Captain Ka-Thunk! I know it’s you!” Eugene quickly poked his head out from behind the tree and shouted. “You’ll not ka-thunk the number one fan of Super Dude without a fight!”

Super Dude is only the greatest superhero ever. He is the star of mountains and mountains of comic books, all of which Eugene owned.

Along with his best friend, Charlie Thomas Jones (also known as the superhero Nacho Cheese Man), and sidekick, Turbo the Hamster, Eugene formed the Sunnyview Superhero Squad to stop evil from eviling in the town of Sunnyview. Sunnyview had a surprising amount of eviling going on.

If it wasn’t Captain Ka-Thunk or his Thunkulicious Thunkers, it could only mean one thing!

High in the tree, General Squirrel Nuthatch was chittering away in his rodent language while staring angrily at Eugene. He held another Atomic Acorn in his paws.

“So, General Nuthatch, it seems you have escaped from the Nut House for evil rodents!” Eugene called up. “But it was, dare I say, nuts of you to return to Sunnyview to unleash your attack! You and your Atomic Acorns will be a threat to the good people of Sunnyview no longer, for you have ka-thunked the number one Squirrel Stopper in the universe!

“You’ve gotten a little too squirrely for your own good, Nuthatch! There’s gonna be more than leaves falling off trees this autumn!” Captain Awesome cried out in his most awesome superhero voice.

“MI-TEE!” Captain Awesome shouted as he leaped his bravest leap. . . .

Stan Kirby tied a beach towel around his neck and became Super Commander Beach Boy when he was six years old. When Stan’s not creating the awesome adventures of Captain Awesome, he loves reading comic books, eating okra, and hang gliding (but not at the same time).