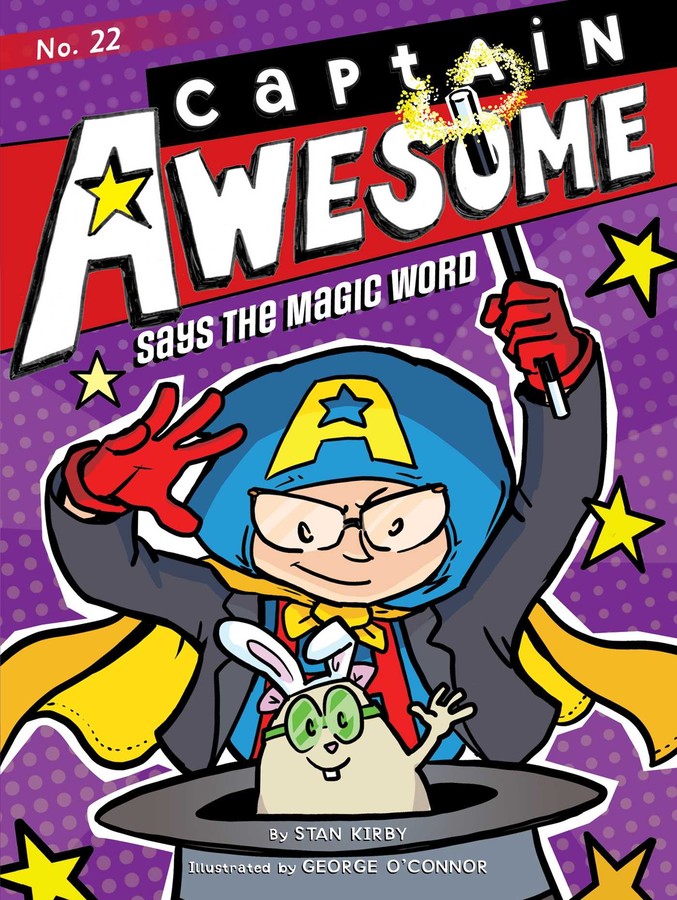 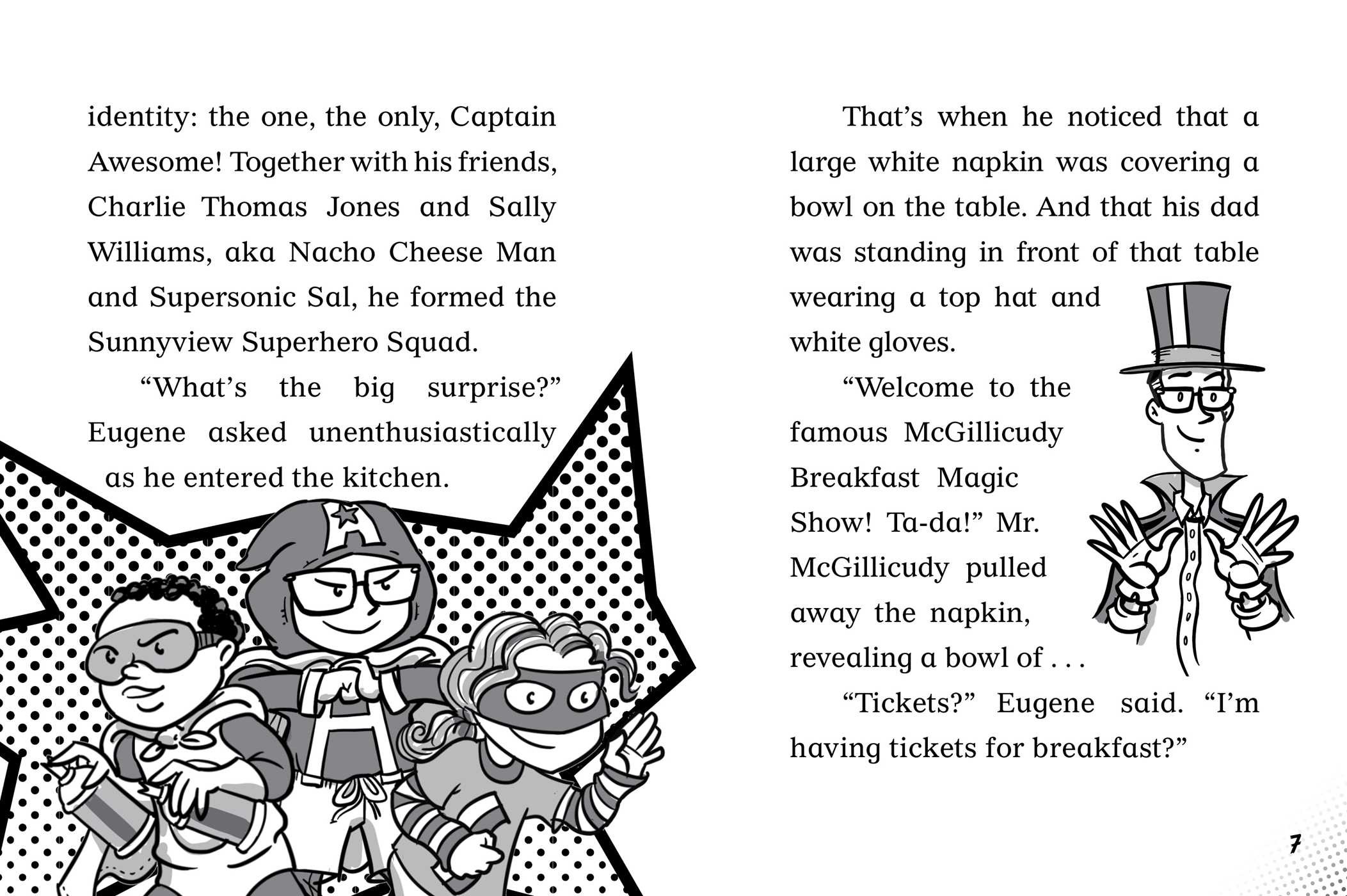 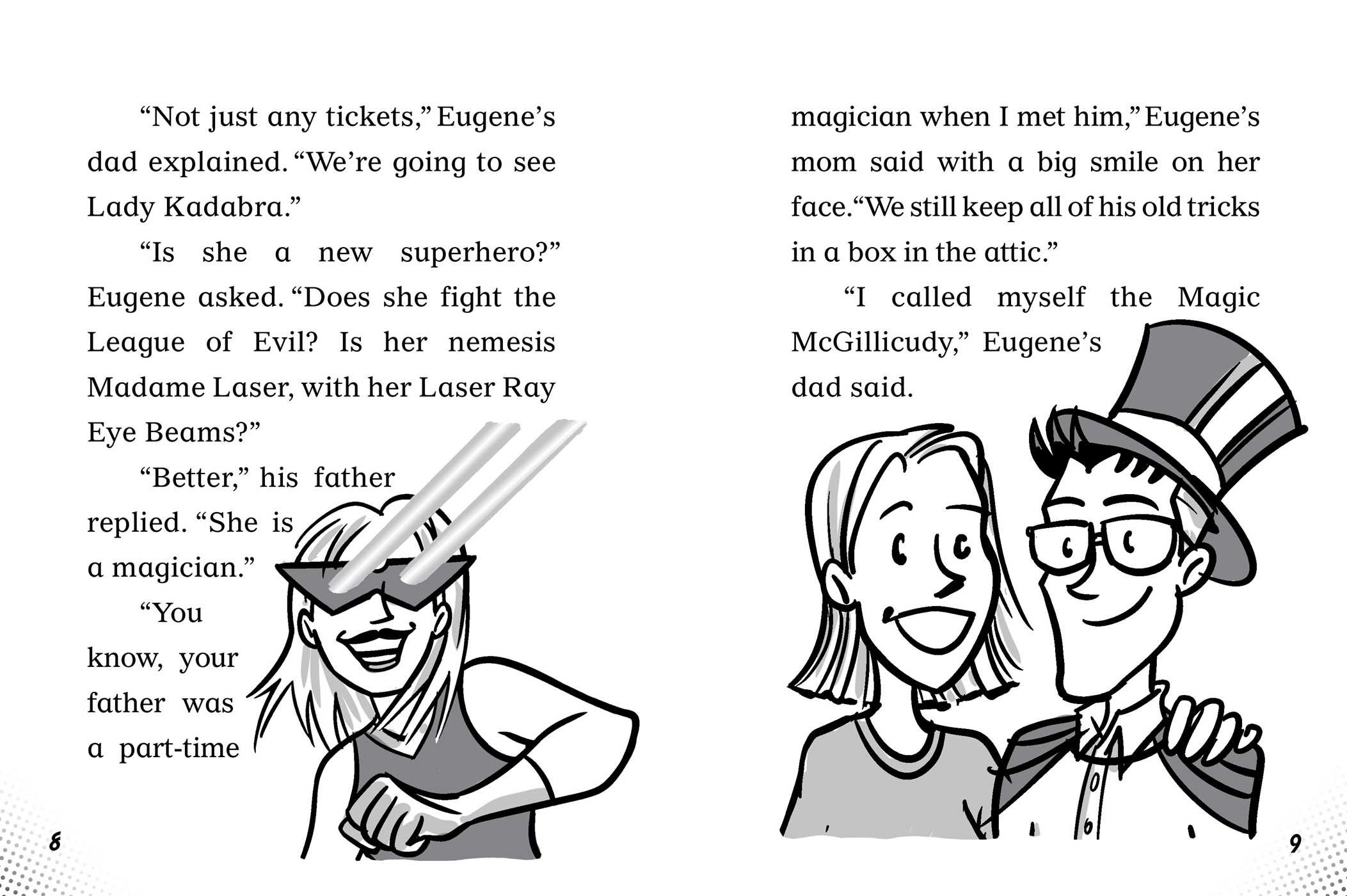 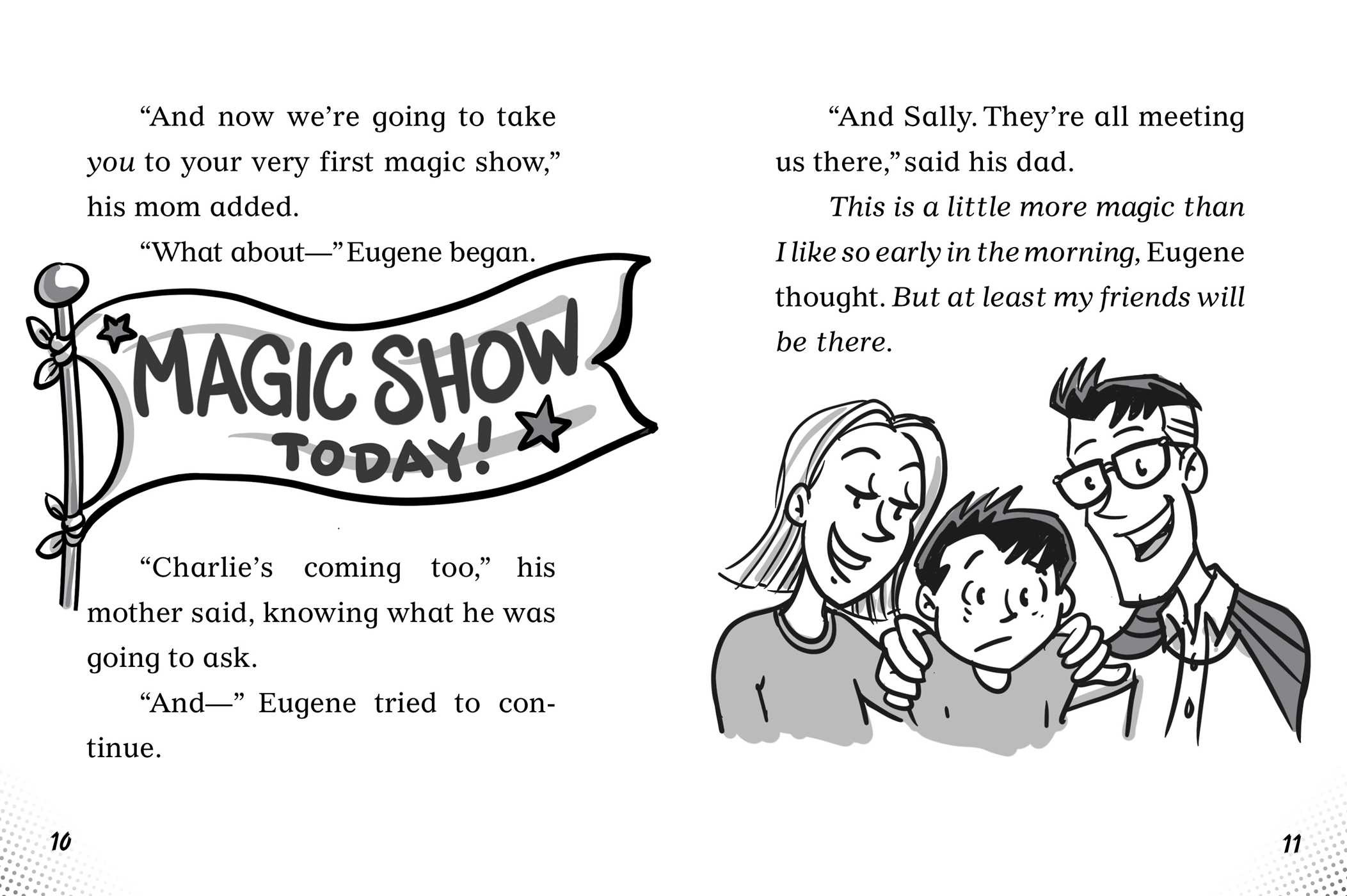 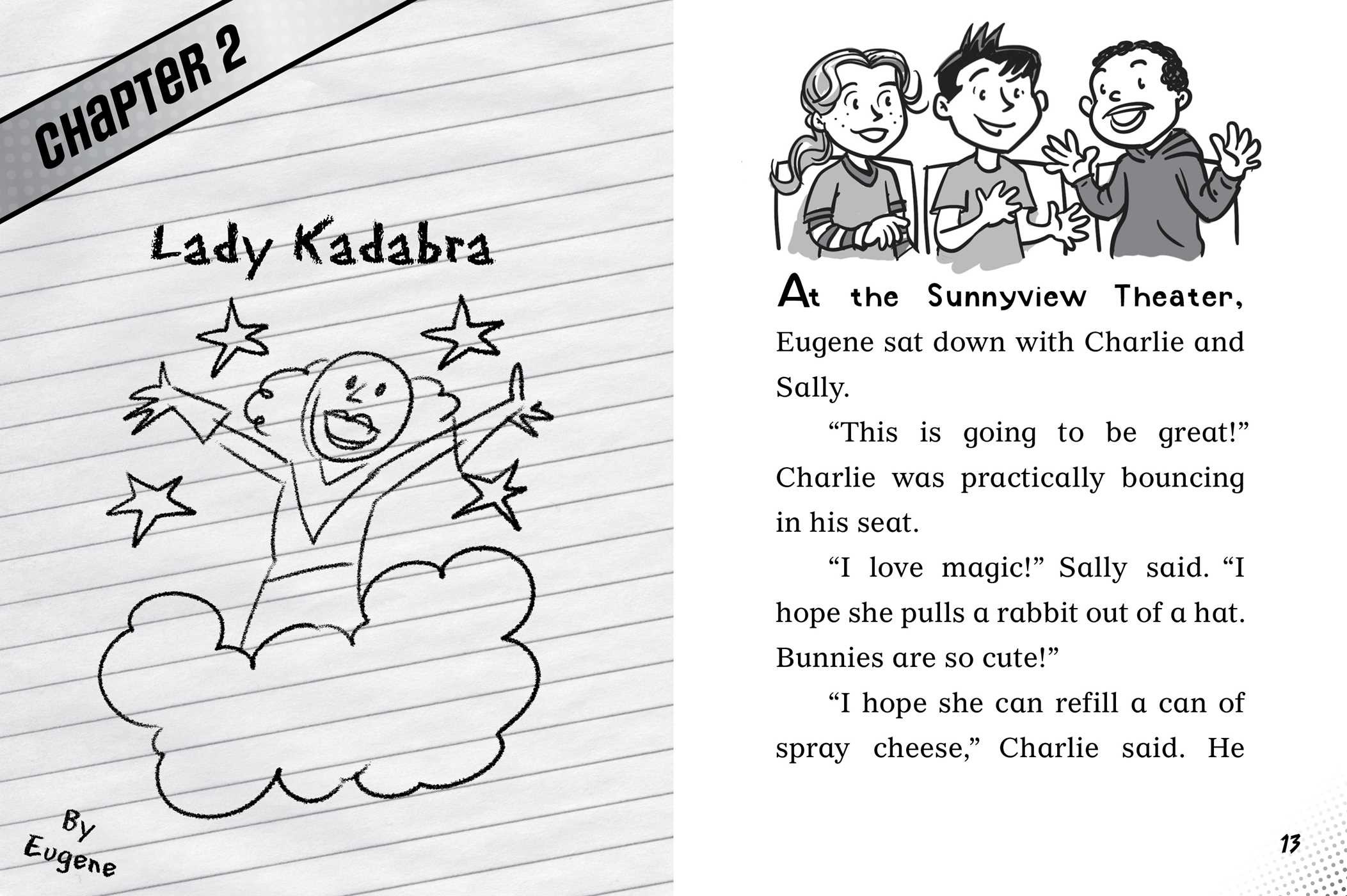 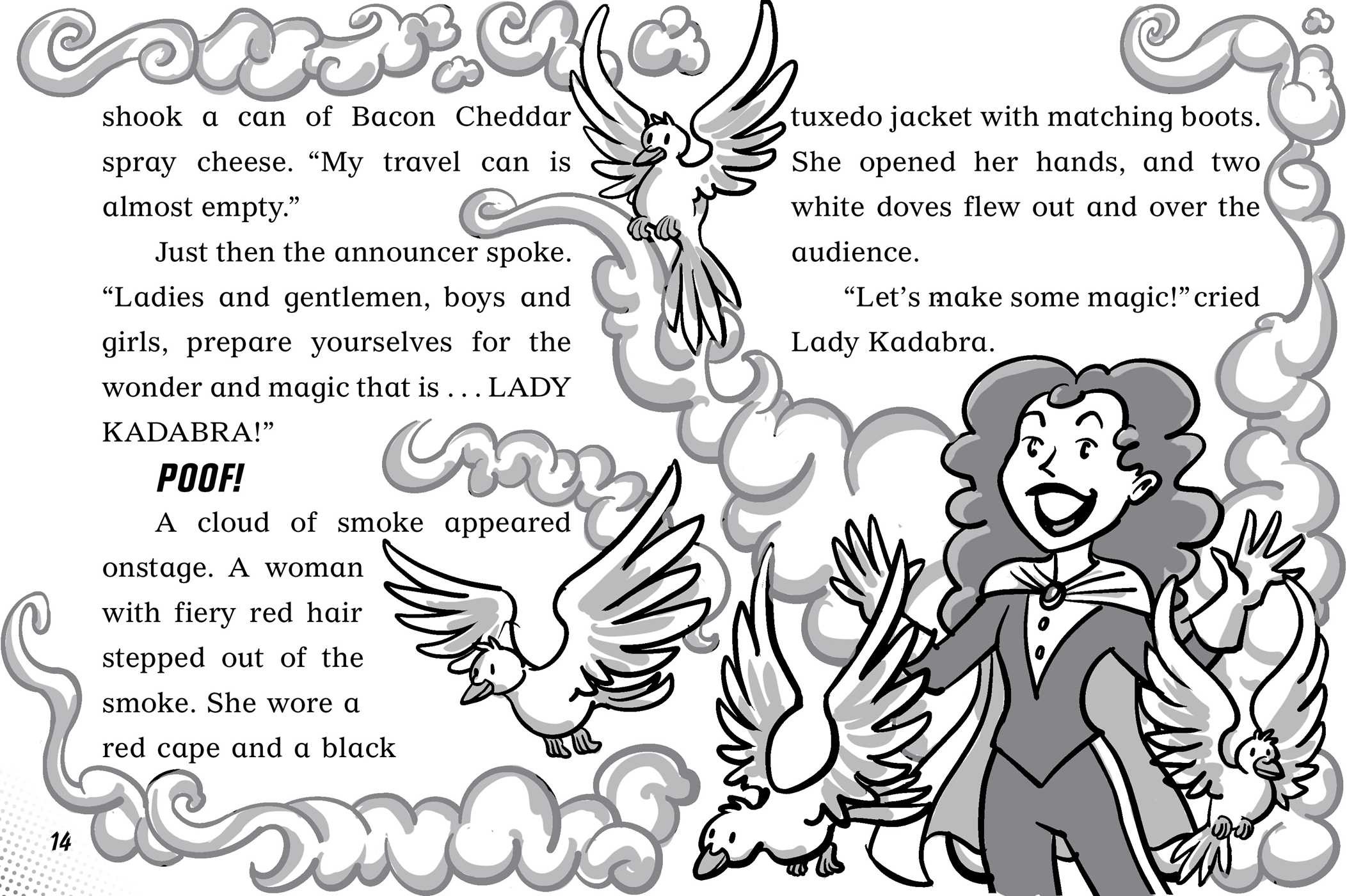 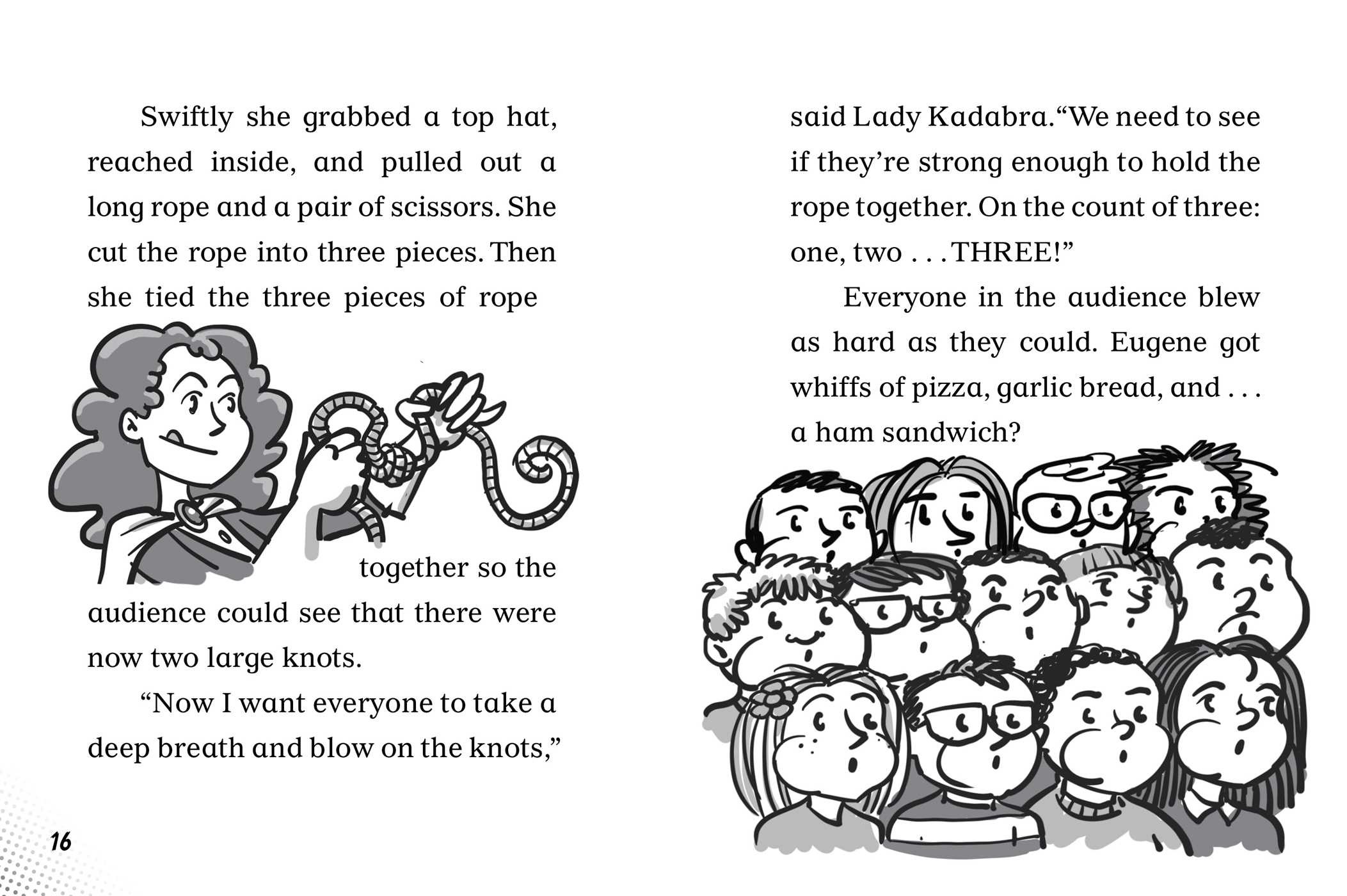 After seeing a real-live magic show, Eugene has decided he wants to become a magician. So he studies magic tricks and practices them on anyone he can: his best friends, his parents, and even his baby sister. Then his teacher announces that her students will all be sharing something new they’ve learned recently, and Eugene knows this is the perfect chance to show his skills. For his biggest trick yet, Eugene will make the class pet hamster, Turbo, disappear! But when Eugene says the magic word, Turbo actually does disappear. Did Eugene’s magic really work? And where is Turbo?

With easy-to-read language and illustrations on almost every page, the Captain Awesome chapter books are perfect for beginning readers!

Suddenly Super Dude flew above the factory and landed next to Captain Awesome.

But before Captain Awesome could speak, Super Dude turned into a cloudy swirl and blew away in the morning breeze.

But that’s not one of his superpowers! Eugene thought.

That’s when Eugene opened one eye. He was actually not on the roof of the toy factory. He was lying in bed.

And someone was standing next to that bed.

“Dad,” said Eugene, “I was having the best dream! Super Dude was with me and—”

“Tell us over breakfast, son,” Eugene’s dad said excitedly. “It’s time to get up!”

Eugene rubbed the sleep from his eyes. “But I get to sleep in on weekends,” he protested.

Eugene shuffled out of bed. As far as he knew, “surprises” could be good or bad. Super Dude pancakes would be a good surprise. A sudden trip to the dentist would be a bad one.

What’s that you say? What’s all this chatter about Super Dude? Why, Super Dude is only the most awesome superhero in the galaxy! He’s stronger than Mighty Mike. He’s more heroic than Hero Hank. He’s smarter than Brainy Brandy. Super Dude is the star of his own comic books, movies, and TV shows. He was also the inspiration for Eugene to create his own secret superhero identity: the one, the only, Captain Awesome! Together with his friends, Charlie Thomas Jones and Sally Williams, aka Nacho Cheese Man and Supersonic Sal, he formed the Sunnyview Superhero Squad.

“What’s the big surprise?” Eugene asked unenthusiastically as he entered the kitchen.

That’s when he noticed that a large white napkin was covering a bowl on the table. And that his dad was standing in front of that table wearing a top hat and white gloves.

“Welcome to the famous McGillicudy Breakfast Magic Show! Ta-da!” Mr. McGillicudy pulled away the napkin, revealing a bowl of…

“Is she a new superhero?” Eugene asked. “Does she fight the League of Evil? Is her nemesis Madame Laser, with her Laser Ray Eye Beams?”

“Better,” his father replied. “She is a magician.”

“You know, your father was a part-time magician when I met him,” Eugene’s mom said with a big smile on her face. “We still keep all of his old tricks in a box in the attic.”

“I called myself the Magic McGillicudy,” Eugene’s dad said.

“And now we’re going to take you to your very first magic show,” his mom added.

“What about—” Eugene began.

“Charlie’s coming too,” his mother said, knowing what he was going to ask.

“And—” Eugene tried to continue.

“And Sally. They’re all meeting us there,” said his dad.

This is a little more magic than I like so early in the morning, Eugene thought. But at least my friends will be there.

Stan Kirby tied a beach towel around his neck and became Super Commander Beach Boy when he was six years old. When Stan’s not creating the awesome adventures of Captain Awesome, he loves reading comic books, eating okra, and hang gliding (but not at the same time).