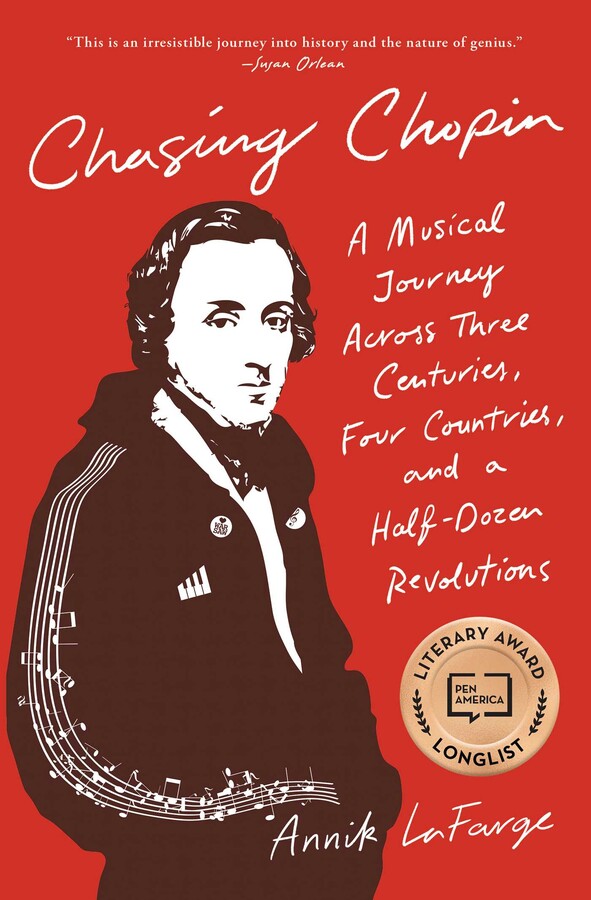 A Musical Journey Across Three Centuries, Four Countries, and a Half-Dozen Revolutions

By Annik LaFarge
LIST PRICE $17.99
PRICE MAY VARY BY RETAILER

A modern take on a classical icon: this original, entertaining, well-researched book uses the story of when, where, and how Chopin composed his most famous work, uncovering many surprises along the way and showing how his innovative music still animates popular culture centuries later.

The Frédéric Chopin Annik LaFarge presents here is not the melancholy, sickly, romantic figure so often portrayed. The artist she discovered is, instead, a purely independent spirit: an innovator who created a new musical language, an autodidact who became a spiritually generous, trailblazing teacher, a stalwart patriot during a time of revolution and exile.

In Chasing Chopin she follows in his footsteps during the three years, 1837–1840, when he composed his iconic “Funeral March”—dum dum da dum—using its composition story to illuminate the key themes of his life: a deep attachment to his Polish homeland; his complex relationship with writer George Sand; their harrowing but consequential sojourn on Majorca; the rapidly developing technology of the piano, which enabled his unique tone and voice; social and political revolution in 1830s Paris; friendship with other artists, from the famous Eugène Delacroix to the lesser known, yet notorious in his time, Marquis de Custine. Each of these threads—musical, political, social, personal—is woven through the “Funeral March” in Chopin’s Opus 35 sonata, a melody so famous it’s known around the world even to people who know nothing about classical music. But it is not, as LaFarge discovered, the piece of music we think we know.

As part of her research into Chopin’s world, then and now, LaFarge visited piano makers, monuments, churches, and archives; she talked to scholars, jazz musicians, video game makers, software developers, music teachers, theater directors, and of course dozens of pianists.

The result is extraordinary: an engrossing, page-turning work of musical discovery and an artful portrayal of a man whose work and life continue to inspire artists and cultural innovators in astonishing ways.

A companion website, WhyChopin, presents links to each piece of music mentioned in the book, organized by chapter in the order in which it appears, along with photos, resources, videos, and more. 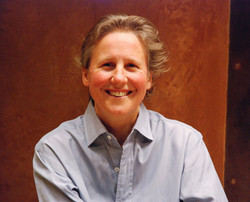 Annik LaFarge is a writer, photographer, lecturer, and author of the much-praised On the High Line: Exploring America’s Most Original Urban Park, winner of the IPPY award for Travel Guidebook. She has been writing about the High Line and urban landscapes since 2009 on the blog Livin The High Line. Her most recent book is Chasing Chopin: A Musical Journey Across 3 Centuries, 4 Countries, and a Half Dozen Revolutions. She lives in New York City.

“LaFarge conjures Chopin on the page, and sets her portrayal apart in the process. She describes the Chopin that we know from previous books: snobbish, selfish, short-tempered, melancholy. But I love how she shows where this characterization misses the mark. The Chopin she introduces here is quite different: independent, innovative, generous, loving. Her portrayal is based on a vast amount of material, from primary sources like letters and journals, works of literature and works of music, and even YouTube clips, to secondary material like works of biography and history. And she distills her research so skillfully, so artfully. LaFarge has paved the way for us: follow the path she (seemingly effortlessly) carves, to discover Chopin, his work and his life, and to understand why he still matters today.” —Emily G., Editor, on Chasing Chopin

“It is almost impossible for me to imagine a world in which [Chopin’s ‘Funeral March’] is both fresh and tragic, where its death is real. Annik LaFarge’s charming and loving new book attempts to recover this world…This book took me into many unexpected corners…For a book about death, it’s bursting with life and lively research.”

"The lurid fantasies foisted on the composer since his death have made him almost unrecognisable — though Annik LaFarge does much to dispel them...an intensely personal journey through time, place and politics....LaFarge is weighty (and great) on the importance and singularity of Chopin’s friend and patron Astolphe de Custine...she has a good eye and ear for her subject, choosing her anecdotes with care."

“[LaFarge's] loving pursuit of the man behind such music is an intriguing collage of people, places, relationships, instruments, and national struggles ... well worth reading. It is instructive, engaging, and sincere.”

“Annik LaFarge’s Chasing Chopin is a slim book but it stands out because it’s a hybrid work—biography and journalism—with utterly lovely, vivid descriptions of Chopin’s music.”

"[A] wonderful book...LaFarge's intellectual curiosity, free of any musical or ideological agenda, is infectious, and she brings the broad analysis of a polymath to her subject...[a companion] website is replete with pertinent videos and recordings that raises the bar on how music-themed books will be expected to incorporate multimedia henceforth.”

“LaFarge delves passionately into the history and culture—up to the present day—surrounding Chopin's legendary Opus 35 sonata, whose third movement contains ‘the world’s most famous funeral march’…a singular work…a seamless blend of the musical and literary verve, with just enough research to ground and elucidate.”

“This slender but wide-ranging volume is impeccably researched....never seems overly scholarly and will appeal to a variety of general readers.”

“A luminous book, rich with reporting and reflection and marvelously animated by LaFarge’s passion for the subject. Whether you love Chopin doesn’t matter: This is an irresistible journey into history and the nature of genius.”

“Annik LaFarge brilliantly traces the footsteps of Chopin’s life in a way that is thoroughly engrossing for the layman and professional musician alike.  My only regret is that there is not an Annik LaFarge book on the life of every important composer in the classical canon.  Her virtuosic linguistic talent is put to good use in this fascinating book.”

– SCOTT YOO, host of Now Hear This on PBS

“Annik LaFarge’s wonderful Chasing Chopin, like the music that inspired it, is a tour-de-force and journey of the soul. Attempting to unpack the awe she experienced hearing Chopin’s Funeral March Sonata at a concert years ago, LaFarge does much more than recount the story of the music and its composer. She tells us why they matter, now, deeply and in all sorts of ways, to her and us. Traveling with a backpack from New York to Paris to Majorca, interrogating musicians, scholars, software developers, piano makers — going where the music and inspiration take her — she produces a diary of discovery that’s a joy to read.”

– MICHAEL KIMMELMAN, author of The Accidental Masterpiece: On the Art of Life and Vice Versa and architecture critic for the New York Times

“Come for the finely drawn portrait of a musical genius, stay for the evocative recreation of the world he knew. By immersing herself in the creative context that nurtured Chopin’s famous sonata, Annik LaFarge makes him live again. Chasing Chopin is infused with a roving curiosity and passion worthy of its subject.”

“Like everyone else, you have heard Chopin’s funeral march, whether in a symphony hall or in a cartoon. Annik LaFarge heard it in both places and got to thinking. The result of those thoughts was her drive to make sense of the cultural journey of a single melody. The result of that drive is not just the fascinating story of a single musical composition, and not even just a thoughtful and satisfying meditation on the way a culture creates itself. LaFarge has documented a story that is itself, as she notes, ‘an antidote to the culture of virtuosity, celebrity, and noise that today envelops us.’”

– SCOTT HULER, author of Defining the Wind: How a 19th Century Admiral Turned Science into Poetry and

A Musical Journey Across Three Centuries, Four Countries, and a Half-Dozen Revolutions

By Annik LaFarge
LIST PRICE $17.99
PRICE MAY VARY BY RETAILER