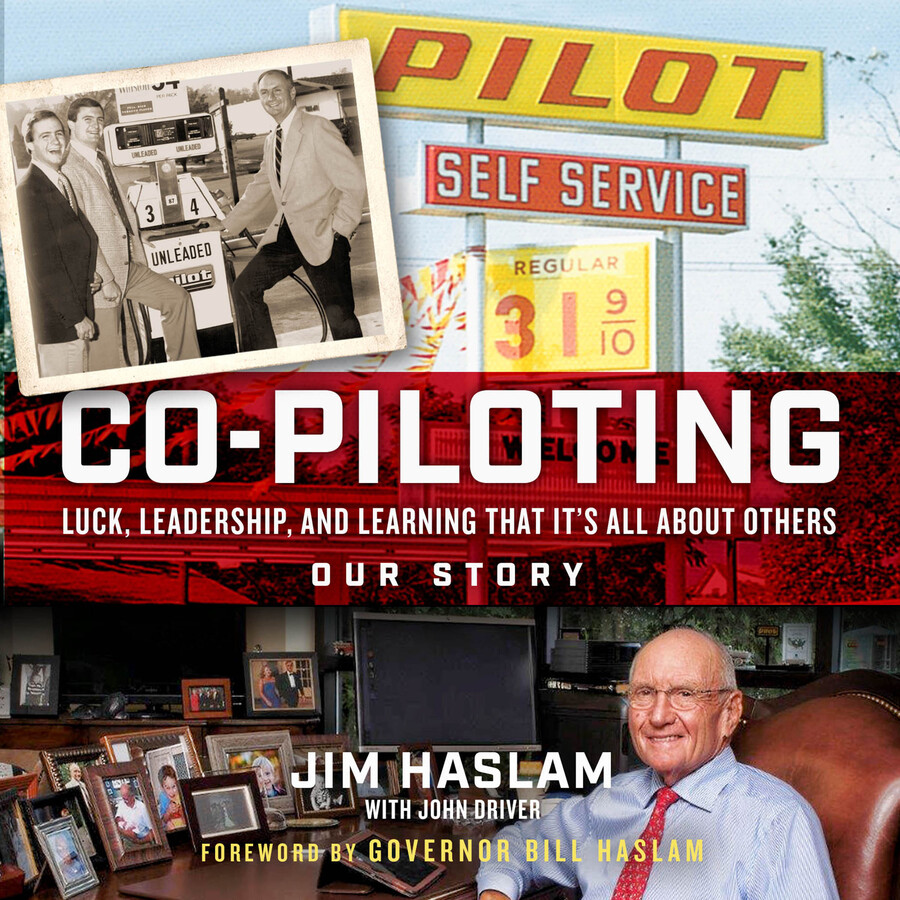 Luck, Leadership, and Learning That It's All about Others: Our Story

This is the remarkable story of one of our nation’s luckiest business leaders of the 20th and 21st centuries. Its topics include sports, military history, and, of course, business principles that are sure to entertain and add value to readers of business books and memoirs.

All proceeds from the sale of this book will benefit nonprofits that support small business, entrepreneurial, and community-based ventures—so that like Jim Haslam, others also may be afforded the chance to be fortunate in their own unique endeavors.

Meet James A. Haslam II—“Big Jim” as he is called by friends and family. The details of his life, his family, and Pilot Company comprise a truly remarkable American story that has yet to be widely told, mainly because Haslam has always refused to write about himself. However, after years of less-than-gentle prodding from his loving family and though under duress, he has finally relented and agreed to pen the incredible story of luck and leadership that has taken him all over the world, has enriched lives in countless communities and philanthropic endeavors, and has led to the growth of the beloved company he founded and still serves daily, even into his late eighties.

A graduate of the University of Tennessee, Haslam played on the famous 1951 National Championship football team led by coaching legend and mentor General Robert R. Neyland, whose renowned Game Maxims inspired Haslam’s own viewpoints of life and leadership in family, business, and in the art of giving back. From being promoted to Company Commander in Korea at the age of twenty-three to starting out at a small oil company with only one gas station, you will follow the unlikely, harrowing, and often hilarious story of luck and leadership that has led Jim Haslam and his family to serve an unbelievable number of industry, community, and philanthropic endeavors affecting countless people in numerous communities, not the least of all Knoxville—and of course, the beloved university Haslam truly believes has afforded him so much opportunity in life. Through great loss and great luck, unforeseen tragedy and unlikely triumph—the story of the Haslams and Pilot Company offers a unique, entertaining, and encouraging perspective to family, faith, and the discovery of what really matters the most in life.

Born in 1930, Jim Haslam played football and became Team Captain at the University of Tennessee. Haslam played on the famous 1951 National Championship football team led by coaching legend and mentor General Robert R. Neyland, whose renowned Game Maxims inspired Haslam’s own views of life and leadership in family, business, and in the art of giving back. Upon arriving in Korea, he was promoted to Company Commander at the age of twenty-three. After returning home from the military, he started a small oil company in 1958 with only one gas station. Pilot Oil Company would go on to become one of the country’s largest private companies with over 28,000 team members serving customers at over 700 locations nationwide. In 2014 the University of Tennessee honored Haslam by naming The James A. Haslam II College of Business for him after a landmark gift of $50 million was made in honor of the Haslam family patriarch. In 2016, Haslam received the prestigious Horatio Alger Award, bestowed upon leaders who triumph over adversity to achieve success and who are committed to philanthropy and higher education. A strong believer in giving back to the community, Haslam founded The Haslam Family Foundation, which has contributed millions of dollars to charitable organizations. Haslam has been a Director of the John F. Kennedy Center for the Performing Arts, First American Bank, AmSouth Bank, and Appalachian Life Insurance Company. He was a trustee for the University of Tennessee for 27 years and Vice Chairman and Chairman of the Executive Committee. He has been the Chairman of the Board of the Greater Knoxville Chamber of Commerce, Leadership Knoxville, The Webb School of Knoxville, the Public Building Authority, and United Way of Greater Knoxville. Haslam also served as State Finance Chair for Howard Baker (Senate), Lamar Alexander (Governor), Bill Frist (Senate), and twice as George W. Bush’s Tennessee Finance Chairman. He served four times as a delegate to the Republican National Convention and was a member of the Platform Committee in 1984. Haslam is married to Natalie Leach Haslam. They have six adult children, 18 grandchildren, and 15 great-grandchildren.

John Driver is an award-winning writer who has authored, coauthored, or served as the primary collaborative writer for over twenty books. An alumnus of the University of Tennessee, he currently resides with his wife, Laura, and daughter, Sadie, just east of Nashville, Tennessee, where he also serves as a minister and hosts a weekly podcast.

Luck, Leadership, and Learning That It's All about Others: Our Story