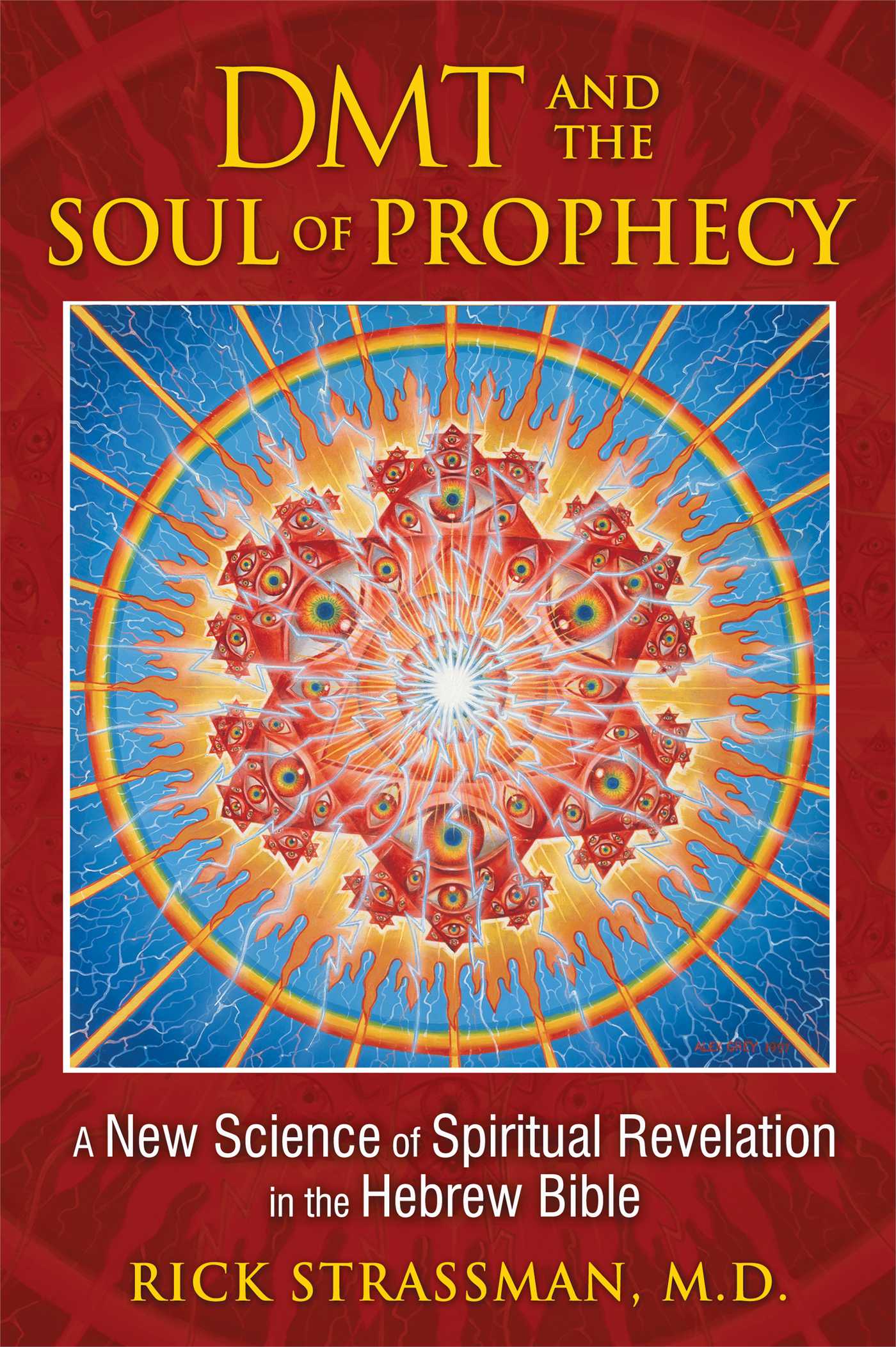 DMT and the Soul of Prophecy

A New Science of Spiritual Revelation in the Hebrew Bible

• Explains how prophetic and psychedelic states may share biological mechanisms

After completing his groundbreaking research chronicled in DMT: The Spirit Molecule, Rick Strassman was left with one fundamental question: What does it mean that DMT, a simple chemical naturally found in all of our bodies, instantaneously opens us to an interactive spirit world that feels more real than our own world?

When his decades of clinical psychiatric research and Buddhist practice were unable to provide answers to this question, Strassman began searching for a more resonant spiritual model. He found that the visions of the Hebrew prophets--such as Ezekiel, Moses, Adam, and Daniel--were strikingly similar to those of the volunteers in his DMT studies. Carefully examining the concept of prophecy in the Hebrew Bible, he characterizes a “prophetic state of consciousness” and explains how it may share biological and metaphysical mechanisms with the DMT effect.

Examining medieval commentaries on the Hebrew Bible, Strassman reveals how Jewish metaphysics provides a top-down model for both the prophetic and DMT states, a model he calls “theoneurology.” Theoneurology bridges biology and spirituality by proposing that the Divine communicates with us using the brain, and DMT--whether naturally produced or ingested--is a critical factor in such visionary experience. This model provides a counterpoint to “neurotheology,” which proposes that altered brain function simply generates the impression of a Divine-human encounter.

Theoneurology addresses issues critical to the full flowering of the psychedelic drug experience. Perhaps even more important, it points the way to a renewal of classical prophetic consciousness, the soul of Hebrew Bible prophecy, as well as unexpected directions for the evolution of contemporary spiritual practice.

The preceding two chapters addressed physical and emotional aspects of the DMT and prophetic states. They have begun accommodating us to the notion that the two sets of experiences resemble each other to an impressive degree. Now I will consider perceptual properties: taste, touch, sight, sound, and smell. This chapter brings nearly overwhelmingly convincing evidence that the two experiences share profound phenomenological similarities.

The DMT effect and prophecy are extraordinarily visual. These features are the most numerous and detailed of any perceptual category, and for that matter, of any category of the syndromes’ phenomenologies. I will begin with darkness and proceed to colors and their characteristics.

View from High above Earth
Those in either the prophetic or DMT state refer to viewing things from great height.

- DMT
Philip: Then I was above a strange landscape, like Earth, but very unearthly (DMT 182).

Clouds or a Cloud
We find accounts of a cloud or clouds--sometimes smoke or clouds of smoke--in both sets of altered states. In the Hebrew Bible, such images often occur in the context of God’s glory. Prophetic clouds frequently are fiery and occupy relatively well-demarcated space. They fill parts or all of the Tabernacle or Temple, and pillars of smoke and/or fire travel with the Hebrews in the wilderness. Clouds also are relevant to the notion of “emerging,” a process by which an identifiable image appears or takes shape out of a relatively amorphous visual matrix.

- DMT
Sean: There were bright yellow clouds I was floating through. As an example of emerging, Philip described a humanoid figure: . . .coming out of the clouds . . . .

- Prophecy
In the beginning of Ezekiel’s vision in Babylonia, by the Kevar River, he sees: . . . a great cloud with flashing fire and a brilliance surrounding it . . . (Ezra 1:4).

After dividing certain sacrificial items in half, Abraham’s vision begins with: . . . a smoky furnace and a torch of fire which passed between the pieces . . . (Gen. 15:17).

Moses receives the Ten Commandments on the top of Mt. Sinai where: . . . the mountain was burning with the fire up to the heart of the heavens, darkness, cloud, and thick cloud (Deut. 4:11).

Daniel witnesses the emerging phenomenon: I was watching in night visions and behold, with the clouds of heaven one like a man came (Dan. 7:13).

Flashes, Sparks, Fire: Equivalence of Imagery
The Hebrew Bible constantly refers to fire and fiery images, either by themselves or with clouds or smoke. While DMT volunteers rarely used the word “fire” to describe what they saw, images in the DMT state do flash, shoot off sparks, and are “fiery.” Many of the colors they described are common to fire--red, yellow, and orange.

It seems that the DMT volunteers and those experiencing Biblical prophecy may be calling by different names visual imagery that appears to be quite similar. This finding led me to the idea of “equivalence of imagery.” The same image receives a label consistent with that person’s psychological and cultural repertoire. This repertoire comprises the raw materials with which one constructs a notion of--and labels--what she or he sees. The research subjects and someone in a prophetic state both see red, yellow, and orange light that glows, shoots off sparks, and vibrates. Whereas DMT volunteers see much less fire in their lives than did nomadic and agricultural tribes from the ancient Near East, our Biblical figures never saw neon lights and Day-Glo paint. Thus the prophet sees “fire” while the research volunteers described more modern- day facsimiles.

- DMT
Mike was a married 30 year-old psychology graduate student, who during a session glimpsed: . . . a large orange-ish sphere, flaming, flashing, sparkling, but not on fire.

Seth described an example of the “emerging” phenomenon from a fiery background: Out of the raging colossal waterfall of flaming color expanding into my visual field . . . they stepped, or rather, emerged (DMT 344).

- Prophecy
David describes his vision: From out of the brilliance that is before [God] burned fiery coals (2 Sam. 22:13).

Similarly, Ezekiel notes: There was a brilliance to the fire, and from the fire went forth lightning (Ezra 1:13).

Beings themselves may be fiery. Ezekiel describes the Chayot he sees in his initial vision: Their appearance was like fiery coals, burning like the appearance of torches (Ezra 1:13).

A being emerges from fire at the onset of Moses’ initial theophany at the burning bush: An angel of YHVH appeared to him in a flame of fire from within the thorn bush (Exod. 3:2).

Ezekiel also reports something emerges: . . . a great cloud with flashing fire and a brilliance surrounding it, and from its midst came a semblance of Chashmal from the midst of the fire (Ezra 1:4).
Rick Strassman

Rick Strassman, M.D., author of DMT : The Spirit Molecule, and co-author of Inner Paths to Outer Space, lives in Taos, New Mexico, and is Clinical Associate Professor of Psychiatry at the University of New Mexico School of Medicine.

“This is a powerful comparative project that brings together the phenomenology of Hebrew prophetic literature and modern psychedelic experiences in order to develop a new theoneurology; that is, a new model of how the brain and the microchemistry of DMT may well mediate, shape, and filter both consciousness itself and humanity’s millennia-old encounter with ‘God.’”

– Jeffrey J. Kripal, author of Authors of the Impossible

“Not since Huxley’s landmark The Doors of Perception has such a profound treatise emerged exploring the nexus of consciousness, the brain, and mind-altering substances. Strassman accomplishes this tour de force by wisely inverting the vector of the field of neurotheology to that of theoneurology. This book exemplifies rigorous science and keen historical analysis and is a significant contribution to human welfare. A delight to read, a sparkling exercise in clarity.”

“This book is a revelation. Strassman has written a daring and remarkable book that connects contemporary psychedelic explorers with the roots of the Jewish prophetic tradition. Here is a book that shows us how this ancient model of prophecy might provide an elegant and powerful language for the ennobling of our journey toward expanded consciousness.”

– Rabbi Shefa Gold, author of The Magic of Hebrew Chant

“A very surprising and refreshing book. Strassman is unique and opens up completely new perspectives. I have learned a lot from this well-written book, and I am sure that other readers will do so too. Strassman took me far beyond familiar ways of thinking about the brain, minds, and interactions with nonhuman intelligences.”

“As Rick Strassman’s extraordinary new book explains, the Hebrew prophetic tradition provides an unexpectedly powerful lens for wrestling with the meaning of our psychedelic experiences. Strassman’s model of theoneurology provides the proper context for viewing the religious importance of our mystic visions.”

“People interested in DMT, hallucinogens, spirituality, monotheistic religion, Buddhism, consciousness studies, and philosophy will find this book stimulating. I commend Strassman for his bold attempt to bridge science and religion, thereby risking attack from both sides. This is the kind of book that will advance knowledge . . . A deep and intense study outside the usual boundaries of education.”

– Jeremy Narby, Ph.D., anthropologist and author of The Cosmic Serpent

“This book is deeply compelling, groundbreaking, thought provoking, and important. Rick Strassman set the bar very high with his brilliant DMT: The Spirit Molecule, but DMT and the Soul of Prophecy comfortably surpasses it by taking the work forward in exciting and unexpected directions. Highly recommended.”

– Graham Hancock, author of Fingerprints of the Gods

“By utilizing the worldview of the medieval Jewish philosophers, Strassman has presented this often emotionally laden and controversial subject in such a rational and scientific manner that even the skeptic and agnostic among; us will be pleasantly surprised at how intriguing the confluence of God, the Hebrew Bible, and psychedelic endogenous DMT can be.”

“This is a brilliant, perceptive, and illuminating book. Strassman states that the best way to understand the DMT experience is to see how closely it follows the experience of Old Testament prophets and vice versa. I was surprised to find out he was right.”

“A stimulating work that, while controversial, will be of interest to students of the Bible and human thought.”

“Dr. Strassman’s theoneurology theory is a coherent and successful undertaking by a uniquely qualified and situated medical researcher of altered states of consciousness.”

“This book provides enough heresy to provide a stimulating read for both atheists and believers!”

“A detailed and ground breaking study. The book is a tour de force and a strong counterpoint to prevailing bottom-up explanations involved in neurotheology, asserting the primacy of the spiritual rather than the material.”

“A fascinating and provocative examination of altered states of consciousness caused by psychedelics, and in particular the powerful, prototypic hallucinogen, DMT.”

“Rick Strassman, M.D., always provokes and delights. His latest work explores the fractal edges of religion and mind, covering such seemingly far-flung topics as the Hebrew Bible, prophetic visions, DMT, the mysteries of consciousness, and more. Buy this book and feed your brain!”

“In science, religion, politics, – everywhere in the academic and public domain – the dominance of spoken and written language is overwhelming. Rick Strassman’s new book helps to tilt the balance to the right direction describing elaborately the fundamental role of visions in our Judeo-Christian tradition.”

“In DMT and the Soul of Prophecy, Rick Strassman courageously examines the Jewish Prophetic Tradition, which in his interpretation has a potent explanatory power of revelatory DMT experiences. Given the renewed interest in these experiences, and the lack of convincing models to interpret them, this book represents a contribution to the dialogue on this subject that cannot be ignored.”

“Strassman lobbies hard for theoneurology, and along the way offers a wealth of examples and experiments that lend credence to the theory.”

DMT and the Soul of Prophecy

A New Science of Spiritual Revelation in the Hebrew Bible