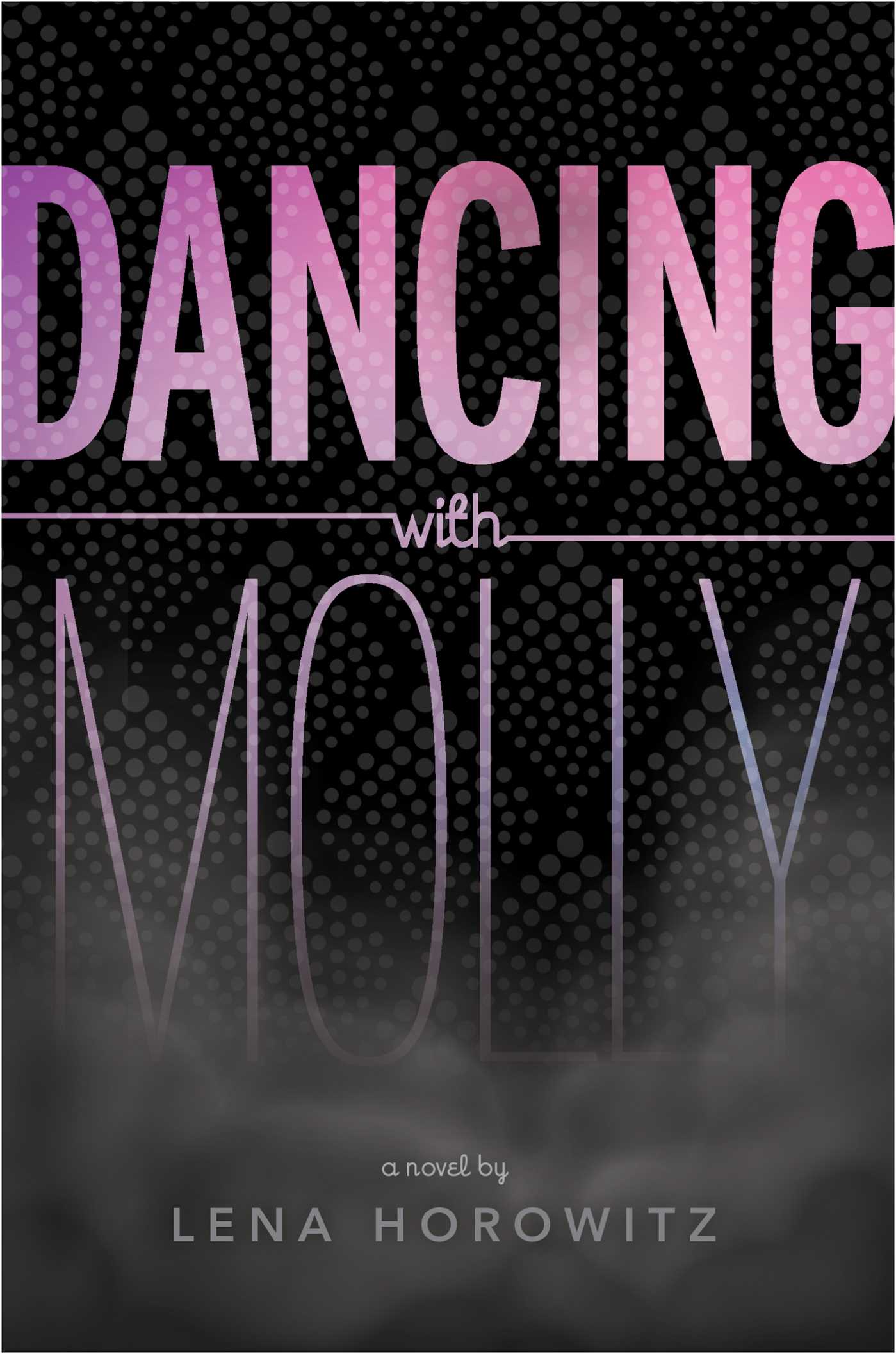 An edgy and intimate glimpse at what one girl will do just to be the life of the party.

Until that night, when everything changed and I finally became someone. Someone special. Someone memorable. Someone Carson might actually care about...

Living a life of pure ecstasy might be no different from not living at all.

Dancing with Molly Saturday, April 26
My dad gave me this journal for my birthday last year when I was a sophomore. I couldn’t even remember if I still had it or not, but I saw it when I woke up this morning. I can’t believe it’s just been sitting on the bookshelf by my desk for over a year now, but I remember when he gave it to me I was like, what am I supposed to write in this? Nothing very exciting ever happens around here. So, I kind of can’t believe I actually have something worth writing down. I also can’t believe I’m really about to write it down, because Mom and Dad would freaking flip out if they ever read it. And while we’re on the stuff I just can’t believe, I sort of can’t believe that I’m sitting upright writing anything at all because when I woke up this morning I felt like the bottom of a shoe. It was like my head was in a vise, and I wasn’t entirely sure I could move my arms. All the energy in my whole body felt like it had leaked out of my spine and dribbled onto the floor.

I suppose the ecstasy had something to do with that.

(Spoiler alert: That’s the crazy thing that happened last night that I can’t believe I just wrote down in this journal.)

My grandma likes to watch reruns of this old cop show on Netflix. It’s called Dragnet, and the detective on there is always saying: Just the facts, ma’am. So, here are the facts: I did ecstasy last night for the very first time. At Jess’s house. With Brandon and Pete from school, and Jess’s friend Kelly. Also a fact: I am NOT the type of girl who would even CONSIDER doing ecstasy. Usually. But last night sort of tested the limits of what I consider usual. So, those are the facts.

Jess called me after I got home from marching band practice last night. (Yes, we still have marching band practice in April. More on that in a minute.) Anyway, she told me to come over and spend the night at her place. We do this a lot, so I didn’t really think anything of it. I was especially glad that she called me because at the exact moment the phone rang, I was standing in the kitchen setting the table for dinner while Mom tossed a salad and Dad was going in and out to the deck, checking the salmon he was grilling on a cedar plank. I was really excited because after we all sat down I was going to bust out my big news:

Our band is going to the FREAKING MACY’S THANKSGIVING DAY PARADE THIS FALL.

So, I was really excited to tell everybody this, especially my mom, because she’s sort of horrified that her oldest daughter is a band geek. She’s always heaving these big soap-opera sighs about how ugly the uniforms are. (“I mean, really, polyester? In the twenty-first century? Couldn’t they give you kids something that breathes a little?”) Anyway, I was hoping that by GETTING ON NATIONAL TELEVISION with my clarinet I might put some of Mom’s epic band shame to rest, but could I do that? Oh no. No, no. Because before I could get the table set, Ashley came screaming in the front door with news of her own. She was in full-blown squeal mode:

God. It makes my head hurt just remembering the decibel level of her voice. Needless to say, my mom started crying. CRYING. Tiny tears of joy streaming down her cheeks. She and Ashley were actually hugging and jumping up and down, my mother still holding the salad tongs and flinging baby spinach across the room. I just stood there, holding the forks and watching this until my dad came in with the salmon and looked at me like, What is going on here? I just shrugged and finished setting the table while Ashley and Mom came back to earth and we finally all sat down to eat.

The irony of the situation, of course, is that I’m a junior this year and I have not been asked to prom. Not that I’d go if I was asked. In fact, it hadn’t really crossed my mind that I’d even want to go. But of course Ashley has been asked as a sophomore. By Reid Boston. The freaking quarterback of the football team. Ashley and my mom talked nonstop about this the entire meal like they were in seventh grade at a slumber party. It sort of made my stomach hurt, but I choked down my salmon and salad and then just sat there staring at them while Ashley squealed on and on about Reid and how handsome he is and how he’s got all of these football scholarship prospects and how she wasn’t sure if he even knew her name before today.

Finally, she took a breath, and my dad looked over at me and said, How was your day at school, and I shrugged and said, Well, we found out that the band is going to the Macy’s parade this fall. Even Ashley was excited by this—which is one of the reasons I can’t hate her, even as much as I want to sometimes. She started squealing again and jumped up and gave me a hug and my dad was really excited and asked about all the details. Mom, of course, stayed quiet, just munching her baby spinach and smiling and nodding. Dad was trying to encourage her to get more excited for me, which I appreciate but have learned is a losing battle. He looked over and said, Isn’t that EXCITING, Kathleen? And Mom nodded again and said, Oh yes. It’s great. I just looked at her and said, Well, it’s not a prom date or anything.

There was this awkward pause and I got up and was carrying my plate to the sink when mercifully the phone rang and it was Jess saying I should come over. I had no idea what she was planning. I didn’t even know that there were other people coming. I certainly didn’t think I’d be doing a tab of ecstasy. Jesus. Who am I?

This is not to say that I am a prude or something. I have a cosmo every now and then when I’m at Jess’s house. She likes to make them when she forces me to watch complete seasons of Sex and the City. Not a couple episodes—Complete. Seasons. And her mom doesn’t really care if we have a drink or two as long as we don’t drive. Her mom would TOTALLY care if she knew we were also smoking weed, but we only do that when our friend Brandon is around. He and Jess used to have this weird crush thing going in junior high, but that was before Jess became the big girl in our class the summer after eighth grade. She got boobs and a lot of curves that summer and sort of never looked back.

I drove over to Jess’s place in my crappy little car. I guess I should be grateful for it, but I wish I drove something besides an eight-year-old hatchback. It’s just like one more thing—you know? One more way that I’m a little less cool than the other girls in my class. I feel like there are all these ways that I don’t measure up, starting with my weird curly brown hair and small rack and big hips. I mean—none of these things are things I have control over. I can dress it up and I used to try really hard, but after a while it just became exhausting. All the hair straightening and eyelash curling in the world just doesn’t matter when you show up in a Fiesta with a dent in the side. At a certain point, I just decided I couldn’t give a shit anymore. But still, sometimes I wonder what it would be like to look like Ashley and step out of a cool car and turn heads in the parking lot. Instead I’m just this girl that nobody notices. At least when I stopped with the makeup and the outfits, the cool girls stopped making fun of me. They just ignored me instead. I was just one more band geek in jeans and a hoodie.

Is it better to be mocked because people feel threatened, or just ignored because you don’t even register? Am I not even worth making snide remarks about anymore? And why do I care so much?

Jeez. I have to go get some more Advil.
Lena Horowitz

Lena Horowitz was born and raised in New York City, where she became familiar with the party scene at a young age. Now she lives in Brooklyn with her husband, two young daughters, and a playful cat named Hope. She’s no longer in the party scene (unless you count princess tea parties), but she still enjoys the occasional EDM dance session.