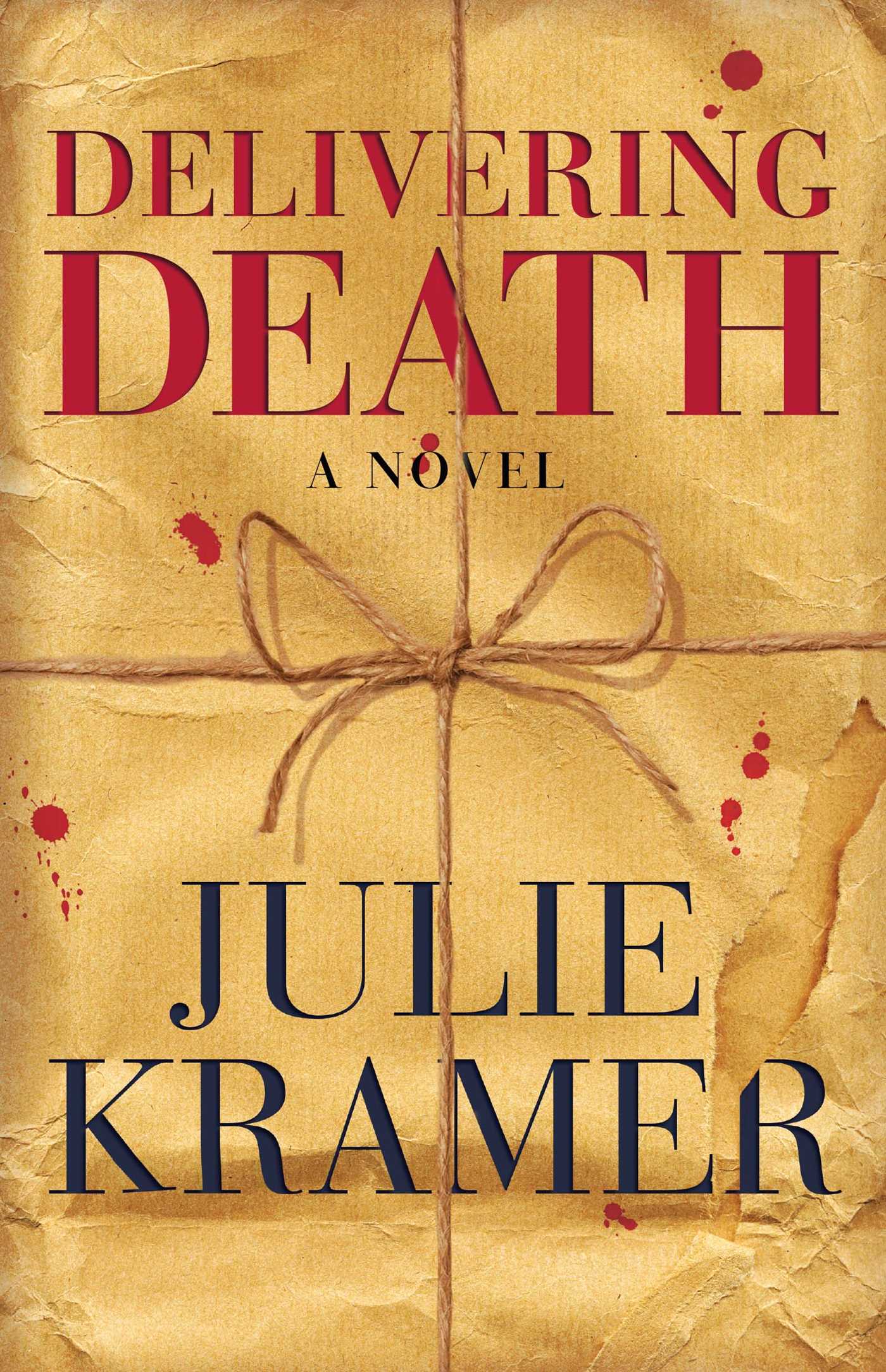 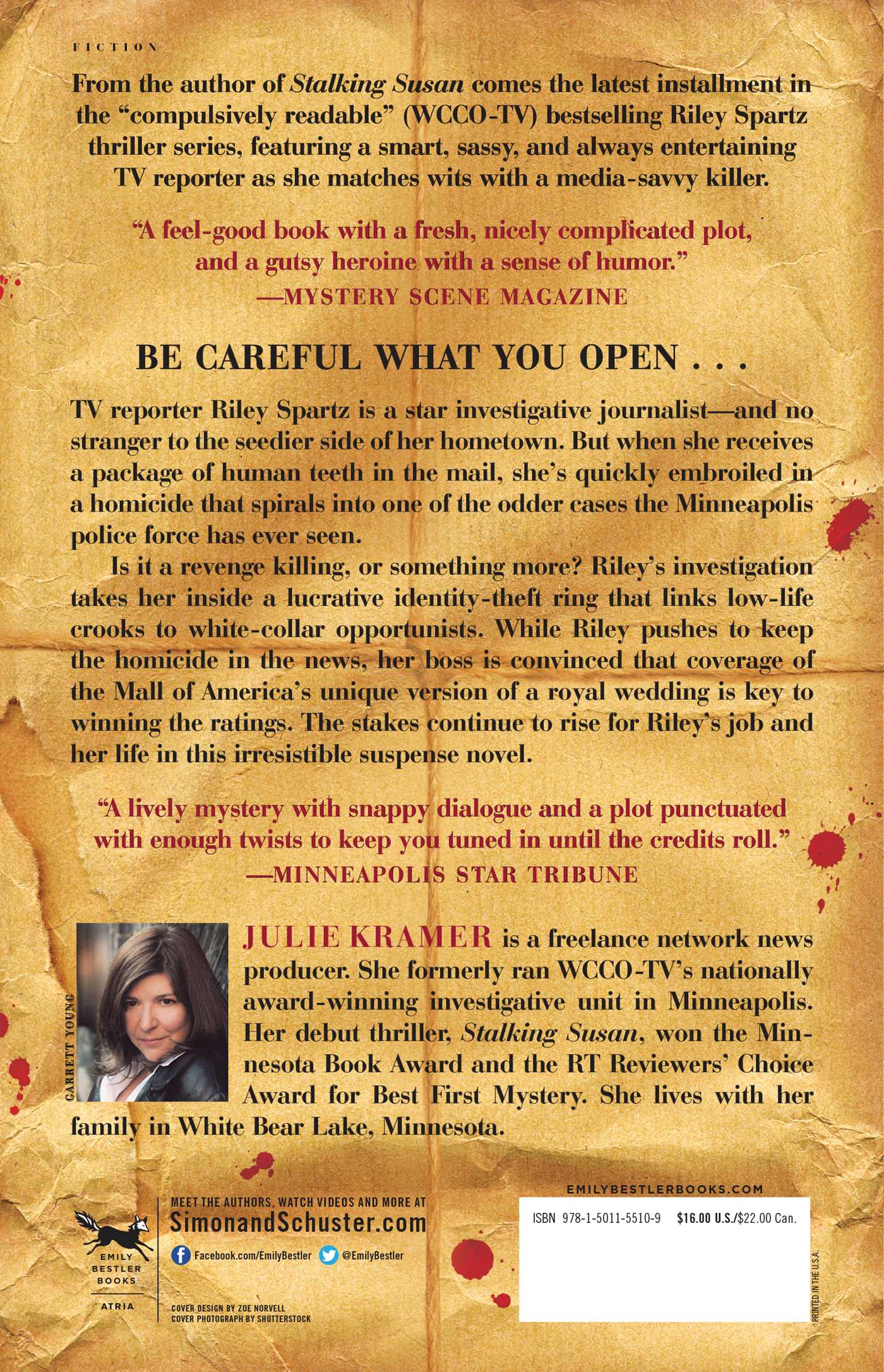 From the author of Stalking Susan comes the next in the “compulsively readable” (WCCO-TV) bestselling Riley Spartz thriller series, featuring a smart, sassy, and always entertaining TV reporter as she matches wits with a media-savvy killer.

Be careful what you open...

The most appealing mystery heroine since Janet Evanovich’s Stephanie Plum, TV reporter Riley Spartz is a star investigative journalist for Channel 3—and no stranger to the seedier side of her hometown. But when she receives a package of human teeth in the mail at work, she’s quickly embroiled in a homicide investigation that spirals into one of the odder cases the Minneapolis police force has ever seen. Though the cops try to keep certain grisly details quiet, this murder has a strange twist—it seems that the killer wants the crime publicized.

Is it a revenge killing, or something more? Riley’s investigation takes her inside a lucrative identity theft ring that links low-life crooks to white-collar opportunists. While Riley pushes to keep the homicide in the news, her boss is convinced that coverage of the Mall of America’s unique version of a royal wedding is key to the station’s winning ratings. As the stakes continue to rise for her job and her life, Riley must outwit the killer in a trap that could leave yet another person dead.

An irresistible suspense novel that will keep you turning pages until the stunning conclusion, Delivering Death brings the humor, intrigue, and twists and turns that Kramer’s fans love.

Delivering Death CHAPTER 1
A guard checked a number against the ID bracelet on the man’s wrist while marking his name off a clipboard as he stood in line.

Another chained the man’s cuffs to his waist and shackled his feet together, so he had to shuffle to board the prison bus behind other stumbling inmates in orange jumpsuits. He heard some snickering among the jailers about something called “diesel therapy.” The term puzzled him, but amid the scuffling and stern faces, he had no time or nerve for questions.

His answer came thousands of miles later via a road trip through highway hell during which he had to constantly remind himself that he was Jack Clemens and he used to be rich.

After the first day, he had learned not to eat the baloney sandwiches offered for lunch. Not only did they taste like shit, but bathroom breaks were stretched hundreds of miles apart and by the time the bus finally stopped for gas, he’d soiled his pants.

“Idiot. Asshole.” The guy in the next seat swore at him, looking as tough as his talk with cornrows, tattoos, and scars.

“Sorry.” Those who knew him on the outside would have been surprised by such a quick apology. Atonement had never come as naturally to him as blaming others. During his court sentencing, Jack had been given a chance to speak, but instead of expressing regret for his crimes—as his attorney had urged—he insisted that he’d been unfairly persecuted. All that blather did was piss off the judge and land him ten years in the slammer.

Now, seven hours into this excursion, the entire bus reeked.

This wasn’t the deal Inmate 16780-59 had envisioned. After all, he wasn’t a violent felon. Or a repeat offender. Maybe some of the outlaws on the bus deserved transport torture, but not him. Sure, he had tried to game the penal system and that arrogance had cost him his comfy bunk at a country club prison camp in northern Minnesota . . . but what did they expect? He was a white-collar criminal.

Until his crime made headlines, his wealth wasn’t the kind that made Jack Clemens a household name. He didn’t own a professional sports team, or appear in television commercials, or invent a product that changed the world. He simply moved money around various financial accounts, and thus could walk down the streets of Minneapolis without being recognized. With brown hair and blue eyes, medium height and weight, this middle-aged man was average in every way but income.

That night, after six hundred miles crammed in narrow plastic seats with stiffening legs and sore arms, the chained gang left the bus to be housed at another prison overnight. The inmates were given fresh uniforms and a chance to shower. But he was afraid of the showers and cleaned himself with water from the toilet.

He had no idea where he was, where he was going, or when the journey would end. He’d stopped trying to calculate what direction they were headed in, knowing only that he didn’t belong on this bus with these animals. The guards ignored him when he tried explaining that a mistake had been made. He waited for the attorney to fix things, but days turned into nights and the wheels on the bus kept rolling. 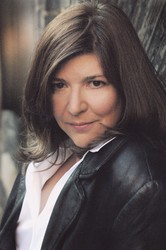 Julie Kramer is a journalist turned novelist. She writes a series of thrillers set in the desperate world of TV news. Julie has won the Daphne du Maurier Award for Mainstream Mystery/Suspense, RT Reviewer’s Choice Award for Best First Mystery, as well as the Minnesota Book Award. Her work has also been nominated for the Anthony, Barry, Shamus, Mary Higgins Clark, and RT Best Amateur Sleuth Awards. She formerly ran WCCO-TV’s investigative unit before becoming a freelance network news producer for NBC and CBS. She lives with her family in White Bear Lake, Minnesota.