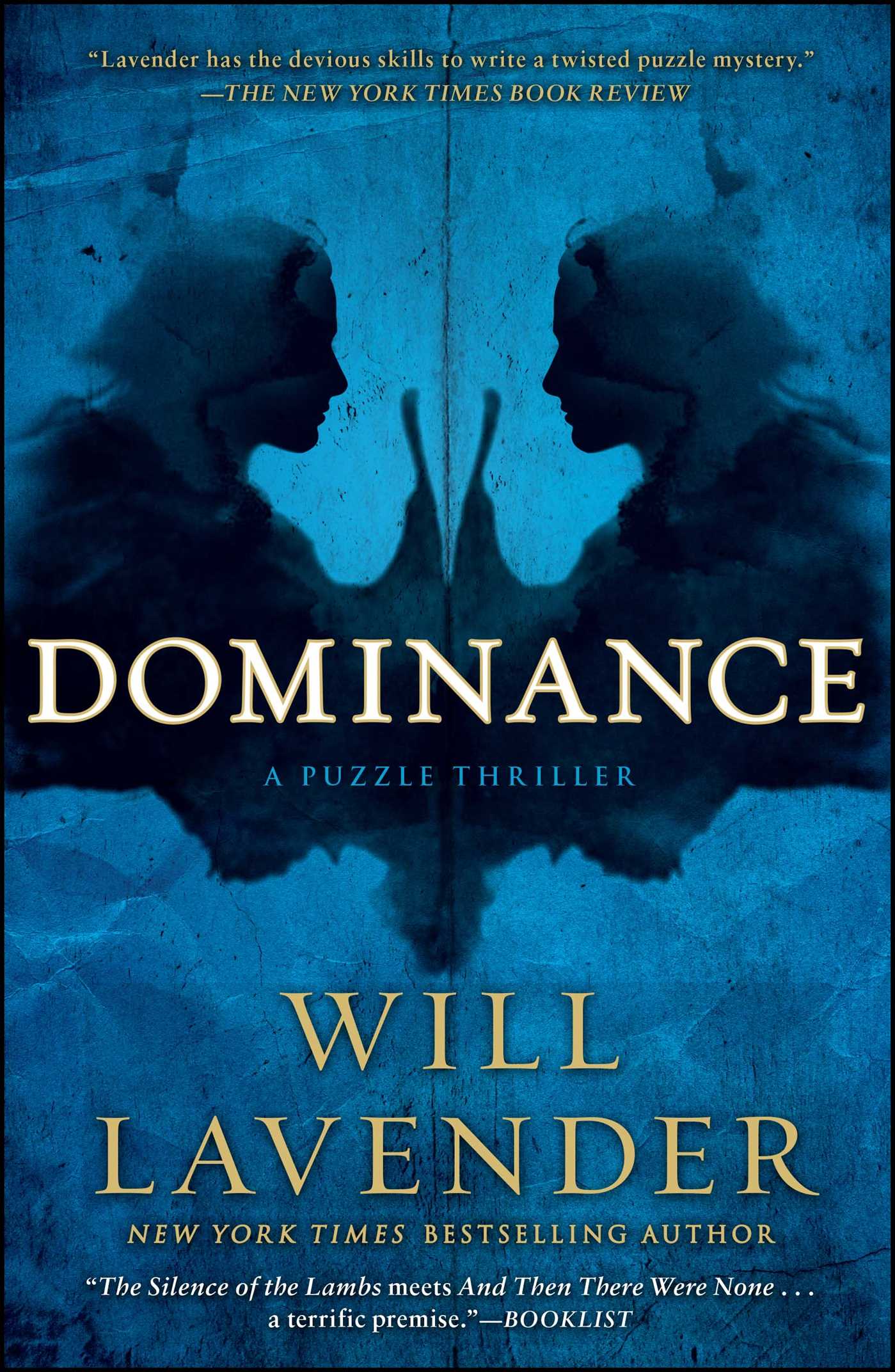 A fast-paced literary puzzler, Dominance is “an academic mystery that gleefully illustrates the dangers of losing yourself in a book” (The New York Times Book Review).

Fifteen years ago, Alex Shipley was part of a special night class taught by Richard Aldiss, a re-nowned literature professor— and convicted murderer. Lecturing the group of nine hand-picked students from a video feed in his prison cell, the professor spoke only of one novel by a famously reclusive author, and he challenged the class to solve the mystery of that writer’s identity once and for all.

Today, Alex is a Harvard professor who made her name as a member of that class, and as the woman who helped set Richard Aldiss free. But when one of her fellow alums is murdered, can she use what she learned from Aldiss to stop a killer—before each of the night class students is picked off, one by one?

Just after dark they rolled in the television where the murderer would appear. It was placed at the front of the lecture hall, slightly off center so the students in back could see. Two men wearing maintenance uniforms checked the satellite feed and the microphones, then disappeared as silently as they had come. It was now five minutes before the class was to begin, and everything was ready.

This was the first class of its kind, and its novelty—or perhaps its mystery—made it the most talked-about ever offered at tiny Jasper College. As mandated by the school president, there were nine students in the classroom. They were the best of the best in the undergrad literature program at Jasper. Now, on the first night of the semester, they waited anxiously for their professor to emerge on the screen.

The class was LIT 424: Unraveling a Literary Mystery. It had been offered at night because this was the only viable time, the only hour when the warden would allow the murderer free to teach. He would teach, if you believed the rumors, from a padded cell. Others said he would be in front of a greenscreen, with special effects to replicate a lectern before him—an illusion of a classroom. The rest claimed he would simply be shackled to his chair in an orange jumpsuit because state law prohibited anything else. They had to remember what this man had done, these people said. They had to remember who he was.

The room was warm with the closeness of bodies. The chalkboard seemed to glisten, even though the Vermont night outside was bitterly cold. The quads were mostly silent, save for the protesters who stood the stipulated two hundred yards from Culver Hall, where the night class would be held. The class met in the basement of Culver for this reason: the powers-that-be at Jasper did not want the protesters to be able to see what was happening on that TV screen.

The few students who were out at that cold hour witnessed the nervous candlelight of the protest vigil from a distance, through the copse of beech and oak that dotted the woodsy campus. A light snow fell, flakes rushing upward in the January wind like motes of dust. Not far away, Lake Champlain purred in the wind. It was as if, one freshman said as he looked down at the scene from a high dormitory window, someone were about to be executed.

Just beyond the protesters, in a building that was dark save for a few bottom-floor lights, a pair of state policemen sat in a room the size of a broom closet, drinking coffee and watching their own blank feed on a tiny screen.

Unraveling a Literary Mystery—this too had been contested. The president of the college chose the title because it sounded to him fitting for what the professor had in mind. But in fact the president did not know exactly what the class would entail. He could not know; the murderer had only hinted at a “literary game” his students would play in the class. About his syllabus he had spoken to no one.

It was this inability to even guess at what was about to happen that silenced the classroom now. In the weeks before the semester had begun, when they went home to their families on Christmas break, the students who had registered for LIT 424 had time to think. To weigh their decision to take this strange course. They wondered if something could go wrong in that lecture hall, if their professor could somehow . . . it sounded crazy, yes. Most of them did not say it aloud, or if they did, they spoke only to their roommates or their closest friends. Slight whispers, torn away by the wind, carried off into nothingness.

If he could somehow get out.

This was what they were thinking in those final seconds. Some of them talked about their other classes that semester, flipped through textbooks and highlighted paragraphs in trembling arcs of yellow. But mostly they sat, saying nothing. They stared at the dead television screen. They wondered, and they waited.

Finally the television went to a deeper black, and everyone sat up straight. Then the box began to hum, an electrical, nodish oohing, a kind of flatline that moved left to right across the room. Their professor—the MacArthur-winning genius, once a shining star at nearby Dumant University and the closest thing to celebrity a professor of literature could possibly be, the same man who had viciously murdered two graduate students twelve years before—was ready to appear.

Then the blackness dissolved and the noise died away and the professor’s face came to them on the screen. They had seen pictures of him, many of them preserved in yellowed newsprint. There were images of the man in a dark suit (at his trial), or with his wrists shackled and smiling wolfishly (moments after the verdict), or with his hair swept back, wearing a tweed jacket and a bow tie (his faculty photograph at Dumant in 1980).

Those photographs did not prepare the students for the man on the screen. This man’s face was harder, its lines deeper. He was in fact wearing a simple orange jumpsuit, the number that identified him barely hidden beneath the bottom edge of the screen. The V of his collar dipped low to reveal the curved edge of a faded tattoo just over his heart. Although the students did not yet know this, the tattoo was of the thumb-shaped edge of a jigsaw puzzle piece.

The professor’s eyes seemed to pulse. Sharp, flinty eyes that betrayed a kind of dangerous intelligence. The second the students saw him there was a feeling not of surprise, not of cold shock, but rather of This, then. This is who he is. One girl sitting toward the back whispered, “God, I didn’t know he was so . . .” And then another girl, a friend sitting close by, finished, “Sexy.” The two students laughed, but quietly. Quietly.

Now the professor sat forward. In the background the students could see his two prison guards, could make out everything but their faces—the legs of their dark slacks, the flash of their belt buckles, and the leathery batons they carried in holsters. One of them stood with legs spread wide and the other was more rigid, but otherwise they mirrored each other. The professor himself was not behind a pane of glass; the camera that was trained on him was not shielded in any way. He simply sat at a small table, his uncuffed hands before him, his breathing slow and natural. His face bore the slightest hint of a smile.

“Hello,” he said softly. “My name is Richard Aldiss, and I will be your professor for Unraveling a Literary Mystery. Speak so I can hear you.”

Aldiss leaned toward a microphone that must have been just out of the camera’s view. He nodded and said, “Very good. I can hear you and you can hear me. I can see you and you can see me. Now, let us begin.” 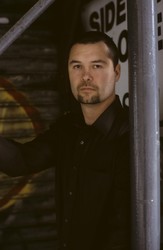 Photography by Jerry Bauer
Will Lavender

WILL LAVENDER is the author of two previous novels, Obedience (which was a New York Times and international bestseller and was translated into fourteen languages) and Dominance. He lives in Louisville, Kentucky.