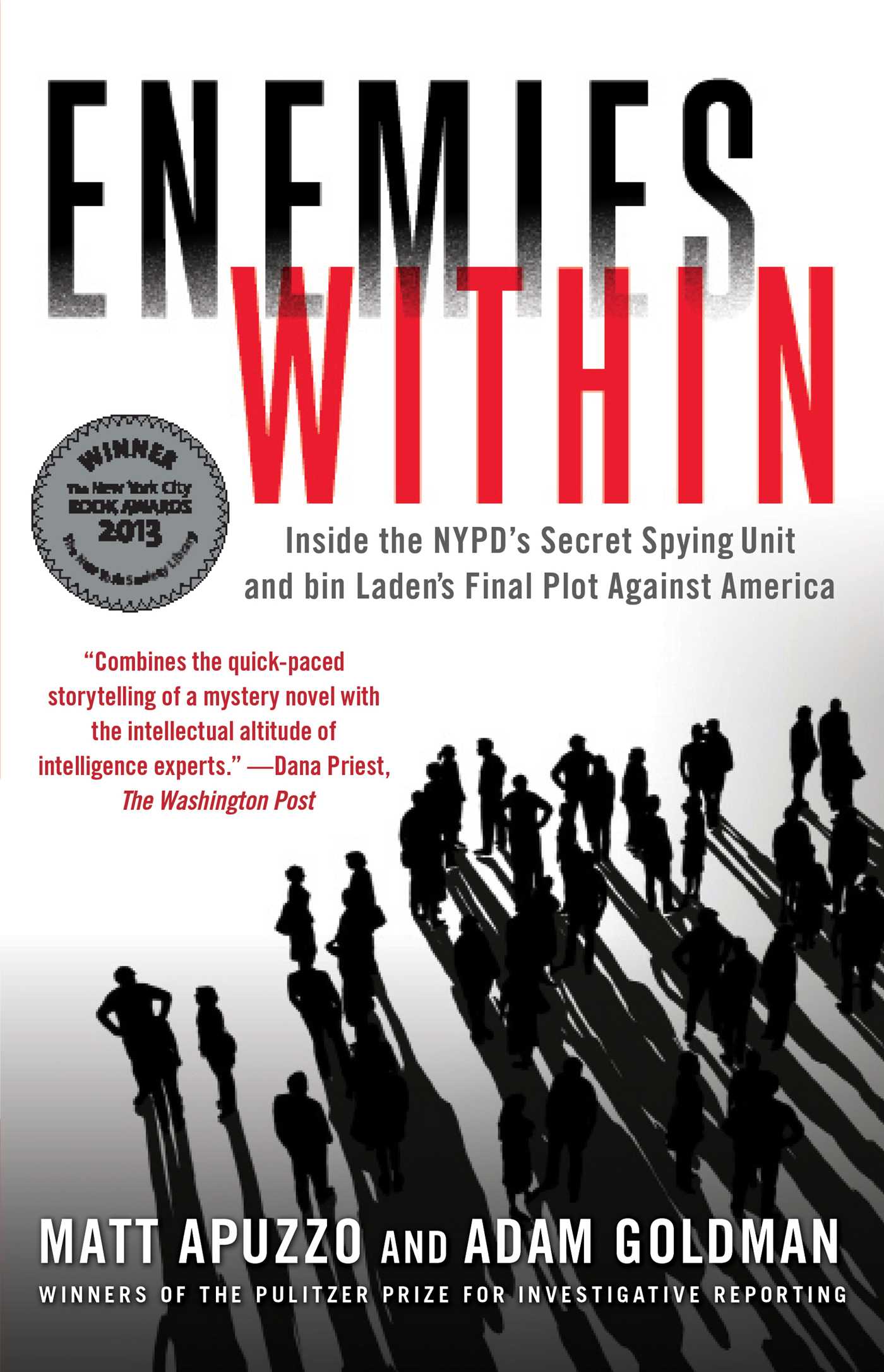 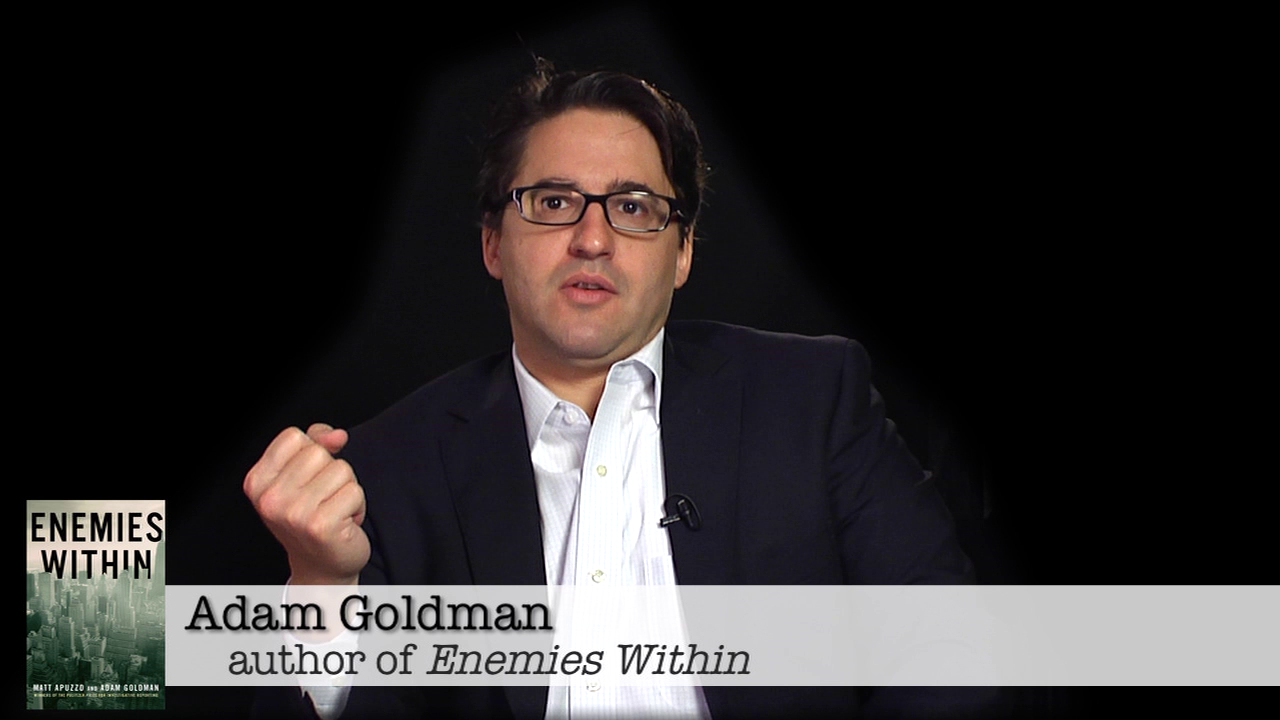 Adam Goldman: What Are You Reading?

Matt Apuzzo: What Are You Reading?

Matt Apuzzo and Adam Goldman on ENEMIES WITHIN

By Matt Apuzzo and Adam Goldman
LIST PRICE $16.99
PRICE MAY VARY BY RETAILER

Two Pulitzer Prize-winning journalists take an unbridled look into one of the most sensitive post-9/11 national security investigations—a breathtaking race to stop a second devastating terrorist attack on American soil.

In Enemies Within, Matt Apuzzo and Adam Goldman “reveal how New York really works” (James Risen, author of State of War) and lay bare the complex and often contradictory state of counterterrorism and intelligence in America through the pursuit of Najibullah Zazi, a terrorist bomber who trained under one of bin Laden’s most trusted deputies. Zazi and his co-conspirators represented America’s greatest fear: a terrorist cell operating inside America.

This real-life spy story—uncovered in previously unpublished secret NYPD documents and interviews with intelligence sources—shows that while many of our counterterrorism programs are more invasive than ever, they are often counterproductive at best.

After 9/11, New York Police Commissioner Ray Kelly initiated an audacious plan for the Big Apple: dispatch a vast network of plainclothes officers and paid informants—called “rakers” and “mosque crawlers”—into Muslim neighborhoods to infiltrate religious communities and eavesdrop on college campuses. Police amassed data on innocent people, often for their religious and political beliefs. But when it mattered most, these strategies failed to identify the most imminent threats.

In Enemies Within, Appuzo and Goldman tackle the tough questions about the measures that we take to protect ourselves from real and perceived threats. They take you inside America’s sprawling counterterrorism machine while it operates at full throttle. They reveal what works, what doesn’t, and what Americans have unknowingly given up. “Did the Snowden leaks trouble you? You ain’t seen nothing yet” (Dan Bigman, Forbes editor). 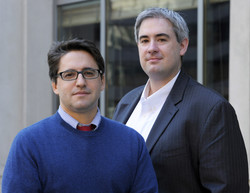 Matt Apuzzo is an Associated Press investigative reporter, focusing primarily on national security and intelligence matters. He lives in Washington, DC. Follow him on Twitter @MattApuzzo.

"Apuzzo and Goldman are the new Woodward and Bernstein."

"Two of America's best reporters pull back the curtain to reveal how New York really works. In the process, they also raise troubling questions about the price that America has paid, particularly in its moral standing, in prosecuting the war on terror. They ask the hardest question of them all. They ask Americans to look in the mirror."

– James Risen, author of State of War: The Secret History of the CIA and the Bush Administration

"The authors use their investigative know-how like skilled surgeons, utilizing their scalpel to expose a malignant growth in the heart of the NYPD."

"Enemies Within combines the quick-paced storytelling of a mystery novel with the intellectual altitude of intelligence experts. It offers insights into the methods that work the best against would-be terrorists, as well as those that are not only a waste of money and time, but abuse the nature of our democracy. A great, informative read."

– Dana Priest, investigative reporter, The Washington Post, and author of Top Secret America: The Rise of the Nation

"Despite all the hype around NSA's secret Prism surveillance program, Apuzzo and Goldman show how the Zazi case really got made. This book is both a thriller and a hard-hitting expose of the NYPD Intel unit set up after 9/11. While the American people have shown some willingness to give up privacy for the hope of greater security, the reader can be the judge of whether the shocking excesses of this unit are justified by its results."

"Like too many stories about the post-9/11 fight against terrorism, this is a tale in which American boldness, cunning, and ingenuity are frequently undermined by American arrogance, recklessness, and narrow-mindedness. Apuzzo and Goldman’s revelatory investigation casts a troubling light on the NYPD and reverberates far beyond New York City, exposing the risks of waging an ill-defined 'war on terror.'"

"Enemies Within is a deeply reported and well written account of the NYPD's aggressive efforts to monitor the Muslim-American community and the most threatening al-Qaeda plot since 9/11--the plot to bomb the New York City subway system in 2009--a plot that NYPD's surveillance efforts did not detect."

– Peter Bergen, author of Manhunt: The Ten-Year Search for Bin Laden, from 9/11 to Abbottabad

“Two tales tell us a great deal—not all of it flattering—about the ways in which law
enforcement has kept the city safe. . . . Assiduous reporting.”

“If you're a citizen, you need to read Enemies Within . . . . The authors have a story worthy of a thriller. The book is peopled with spies, terrorists and decorated war heroes. . . . Apuzzo and Goldman have sounded an alarm.”

“While Apuzzo and Goldman show their veteran reportorial skills in exposing the details of the NYPD’s surveillance program, they also expertly craft the drama of the unfolding terrorist plot and the race by government agencies to foil it. . . . A fast-paced, informative investigation into the ever-messy arena of privacy versus security.”

Matt Apuzzo and Adam Goldman chronicle how the quest for safety led to something far darker....Did the Snowden leaks trouble you? You ain't seen nothing yet.

By Matt Apuzzo and Adam Goldman
LIST PRICE $16.99
PRICE MAY VARY BY RETAILER