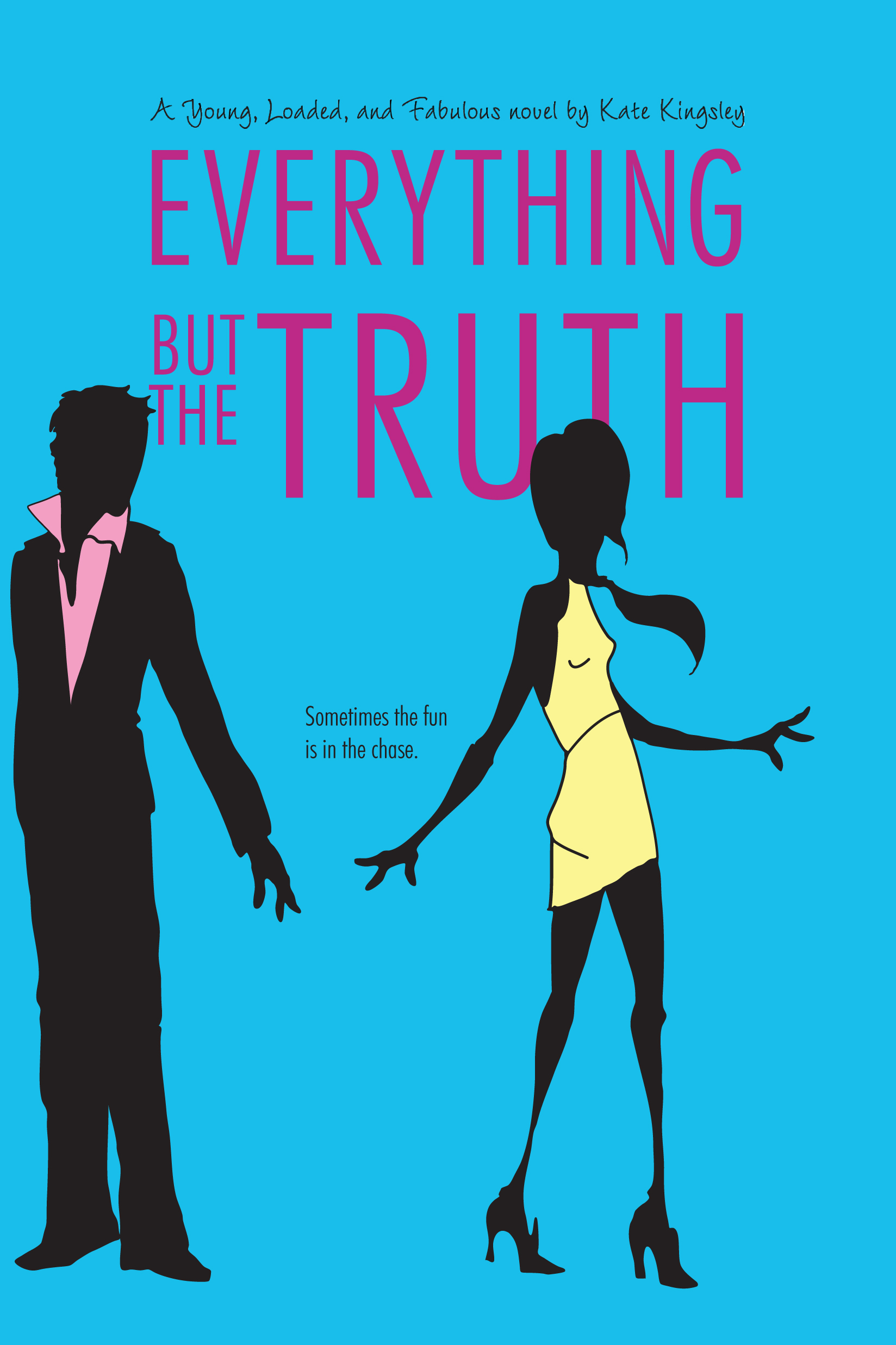 Everything but the Truth

All’s fair in love and war…

Now that Alice and Tally are back on top at their posh boarding school in London, they have more important things to deal with: boys. Alice is struggling to get over her ex-boyfriend, which leads her right into the arms of a mysterious (and possibly bad) new boy. Meanwhile, Tally is walking a thin line as she cozies up to her hot English teacher. Both girls are flirting with disaster, and the heartbreak may be more than they can take…

The Rochester family’s rain-streaked Bentley looked utterly out of place as it pulled up on a grimy East London street, and so did the angular face glaring out of its backseat window.

“This is it?” Alice Rochester sniffed. She was scrutinizing the cracked concrete facade of Formica, Dalston’s hippest new music venue. “Could this place be any less glamorous? What the hell were they thinking?”

“Babe. Chill.” Natalya Abbott, Alice’s best boarding-school friend, twirled a strand of white-blond hair round her fingers. Slumming it on the frontier of civilization once in a while was fine by Tally: She’d grown up most of her life in Russia, and compared to Moscow, London was tame. “It’s the boys’ first-ever gig. What were you expecting—the Royal Opera House?”

“Well, I wasn’t expecting a royal dump.” Alice squinted harder into the street. The only streetlamp actually working kept sputtering on and off, but that didn’t hide the knot of arty-looking East Londoners huddled next to a Dumpster. They were smoking cloves, of course. So alternative. Whatever. Alice started to size up one of the girls in the group, who was wearing metallic leggings with crumpled red ankle boots, and an oversize brooch pinned above her left boob. But just then, a bark of laughter ricocheted down the street and her eyes darted to its source. A long-haired boy, smirking at the Bentley, was nudging his mate and pointing at the car’s capped chauffeur.

Flushing pink, Alice shrank back from the window.

“Er, Marshy.” She leaned toward the front seat. “Be a darling and drop us off in that alley round the corner. Would you? Please?”

“Tell me another one,” the driver snorted. “In this area? You’ll get mugged just crossing the road. Have you gone mad?”

“No.” Alice recoiled defensively. “I just feel like stretching my legs a little. Exercise is important. God.” She stroked her cream leather armrest. “Anyway, it feels a bit rude blocking the street like this. I wouldn’t want to obstruct people’s view of all those run-down warehouses.”

“Very considerate of you,” Marshy remarked, leaning back and folding his arms. “But you’re getting out here. Not in some dodgy alleyway.”

“Ugh. Fine.” Snatching her Miu Miu handbag, Alice poked one kitten heel, then the other, onto the cobblestones and shivered slightly. Tally caught the movement.

“No need to be nervous, babe,” she soothed. “I’m sure it’ll all be fine with him tonight. After all, he invited you.”

Alice recoiled. “I’m not nervous. Why would you think that? Don’t I look calm?”

Rolling her eyes, Tally surveyed their surroundings. The antique diamond ring her grandfather had given her last summer in Moscow flashed with each blink of the defective streetlamp. “I’ve been dying to come out to Dalston for months,” she said, changing the subject. When Alice got into one of her moods, there was nothing else to do. “I’m so unbelievably bored of all our usual clubs. Mayfair. The King’s Road. Blah, blah, blah. Same crowd, same champagne, weekend after weekend.”

Tottering alongside the car in her four-inch heels, she pounded at the window, her white-blond hair whipping her face. The brakes screeched.

Alice glanced up and down the street. Thank god the smokers had disappeared inside. This was typical Tally, causing some crisis at the last minute. At St. Cecilia’s, the exclusive girls’ boarding school where the two of them ruled the junior class, Tally was constantly in chaos. She showed up late for lessons, spilled caffe lattes all over her homework, and only made her bed if Alice forced her. Lately, she’d come up with a disaster of a whole new magnitude—falling hopelessly, embarrassingly in love with their hot new English teacher.

But that was a different story altogether. And Alice had more important things to think about right now. Such as her own love life.

Nervously, she scanned her reflection in the club’s frosted-glass door, checking that her olive skin still sparkled with gold shimmer, that her deep-set, catlike eyes were still outlined in dramatic black, and that the shorts of her green silk jumpsuit still just skimmed the curve of her butt cheeks. Perfect. There was room for improvement in the lips, though: the more kissable they looked, the better. She slicked on more scarlet Chanel lipstick and pouted seductively. But her eyes remained uncertain. Would he go for it? Would this be her lucky night?

She waddled over like a bedraggled peacock, strips of lace trailing behind her.

“For fuck’s sake!” Alice gawked at the sheer pink thong that was the only thing covering Tally’s butt. In fact, “covering” was an overstatement. “You can’t go inside like that. Your entire ass is exposed.”

“Seriously?” Tally’s expression glinted with mischief. “Marshy must be mortified,” she whispered. “Which panties am I wearing, the Agent Provocateurs? The La Perlas?”

Alice raised her eyebrows. “Oh, hang on a sec, I’ll just check the label, shall I?” She dragged Tally to one side. “Back against the wall.”

“Girls.” Marshy’s muffled voice sounded from the car’s trunk, where he was rifling through some sort of rag pile. “Tally, dear, have a look at this. I’ve found something to cover your, ahem…”—he frowned severely—“… bottom.”

Tally snorted with giggles and reached for the rumpled garment. “Ewww!” she squealed, dropping it as a shower of dirt poured out. “No, no, no. What the hell is that?”

“Only Hugo’s rugby uniform!” Marshy retrieved the bundle from the gutter and held up a pair of shorts, streaked with grass stains and matted together with dried mud. “A bit of muck never hurt anyone,” he declared bracingly. “It’s better than looking like a stripper.”

“Not,” Tally muttered. Looking like a stripper most definitely had the edge over wearing Alice’s fourteen-year-old brother’s dirty shorts into a club. “I mean, thanks and everything, Marshy, I know you’re only trying to help, but those aren’t coming anywhere near me. I’d prefer to rip off all my clothes and go in naked.”

“Bad idea, bad idea.” Alice shook her head rapidly. She knew Tally too well to dismiss those words as an empty threat.

“That’s your father, Alice. I’ve got to go collect him from the von Holstadts’ cocktail party. Right, girls, er…” Marshy cast a glance at Tally, who’d folded her arms stubbornly across her chest, as if someone might try to thrust the rugby shorts on her at any second. “Have fun. Go straight inside, and call me when you’re ready for a lift home. You’ll never find a cab round here.”

Alice watched, shoulders slumped, as the car door slammed and the Bentley rolled off through the rain.

“Now what are we gonna do?” She glared at the Dumpster. What a mess. Tristan’s band went on in five minutes and she was stuck out here with a half-naked exhibitionist. This was not how she’d pictured the evening.

Tally wasn’t listening. Instead, she was staring at the pavement under her purple patent leather stilettos—and something sharp and delicate was winking back—a large black-and-white brooch in the shape of a rose. The same one Alice had seen on the girl with the red boots.

“Brilliant!” Tally beamed. “How lucky is that? Pin it to my skirt, Al. It’ll hide my thong.”

“What…?” Alice stared. “We can’t just take something off the street—it belongs to that girl. We should give it back.”

Tally twisted the brooch to and fro. “The black and white’ll really stand out against my skirt,” she gushed. “And I can wear it pinned to my winter coat as well. How chic!”

“Tally!” Alice snapped. “Get a grip. That thing’s high-quality vintage—it was probably her grandmother’s or something. Anyway, it’s not yours.”

“It is now.” Tally’s jaw was set. “It’s just like I always say about men: finders keepers. Babe.” She elbowed Alice in the ribs. “Lighten up.”

Alice clenched her jaw. Lighten up. What the hell was that supposed to mean? She knew how to have fun—and she knew it better than anyone else in her clique. Just because she was careful not to get into trouble for it did not make her a goody-goody. She set her jaw.

But there was no time to be pissed off. Suddenly, inside Formica, the music fell away and the crowd cheered. Shadows milled behind the glass doors.

Shit. They must be gearing up for Tristan’s set now. He was on next. She had to get in there.

“Whatever.” Taking a deep breath, Alice stuck the brooch into the skirt’s splintered lace. Then she swung open the door. 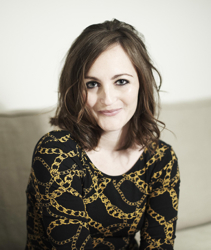 Kate Kingsley was born in London but spent her life traveling between London and New York. She now lives in New York.

Everything but the Truth

More books in this series: Young, Loaded, and Fabulous