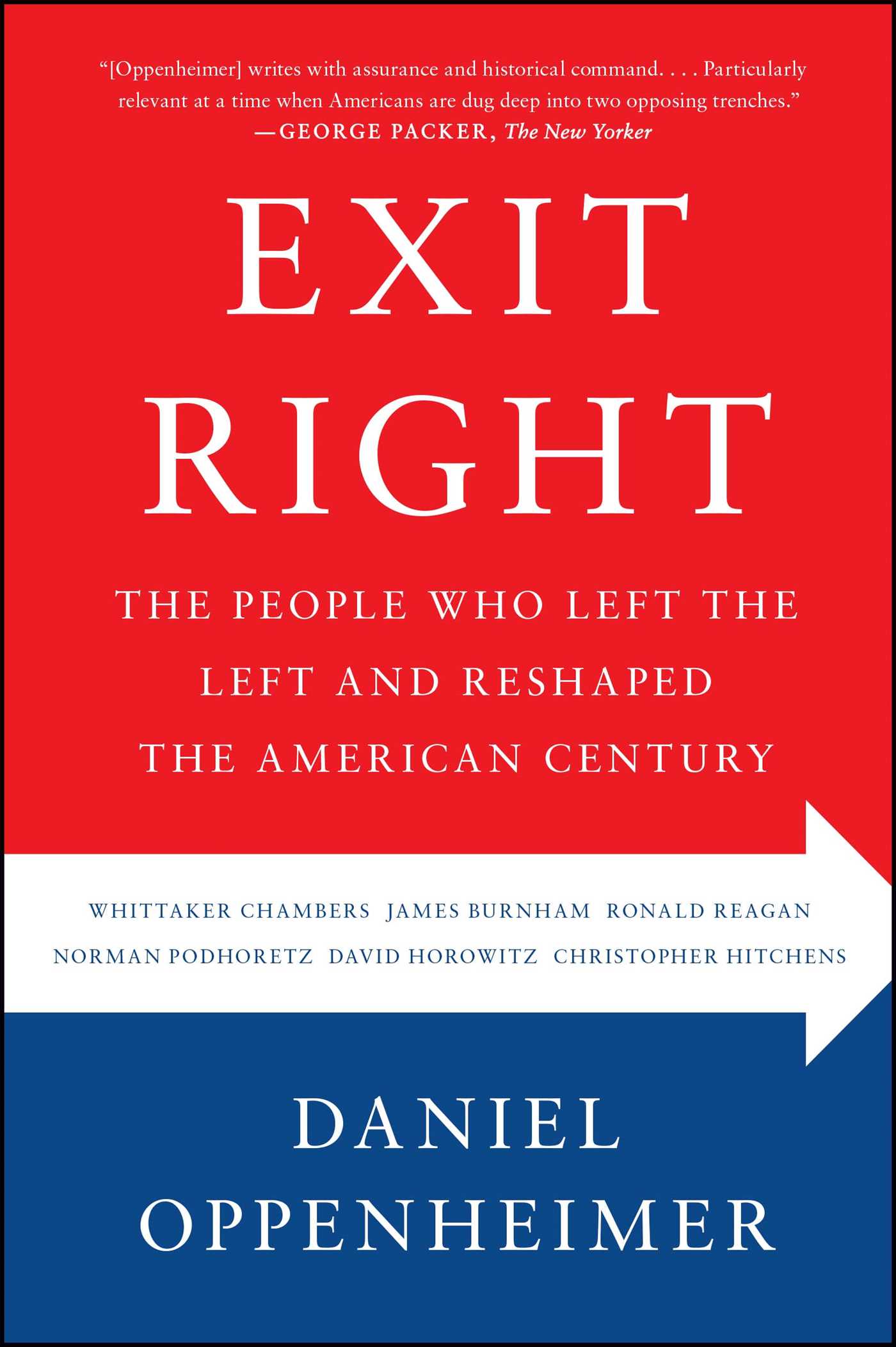 The People Who Left the Left and Reshaped the American Century

By Daniel Oppenheimer
LIST PRICE $17.99
PRICE MAY VARY BY RETAILER

A provocative look at the evolution of America’s political soul through the lives of six political figures who abandoned the left and joined the right—“thoughtful…engaging…political history at a very high level…and the pages fly by” (The New Republic).

From the 1950s to the early 2000s millions of Americans moved left to right politically—a shift that forever changed the country. In Exit Right, Daniel Oppenheimer takes us from the height of the Communist Party’s popularity in America in the 1920s and 30s, through the Great Depression, World War II, the Cold War, the Civil Rights Movement, and up through conservative resurgence of the 80s, before ending with 9/11 and the dawn of the Iraq War. Throughout, he tells the stories of six major political figures whose lives spanned these turbulent times and whose changing politics reshaped the American soul: Whittaker Chambers, James Burnham, Ronald Reagan, Norman Podhoretz, David Horowitz, and Christopher Hitchens. As he maps out the paths that these six individuals have taken to conservatism, Oppenheimer explores the questions of why and how we come to believe politically at all. How do we come to trust one set of truths, or one set of candidates, or associate with one crowd of people—over all other alternatives?

Exit Right is an “absorbing” (The Atlantic) look at the roots of American politics. This is a book that will resonate with readers on the left and the right—as well as those stuck somewhere in the middle. Through six dramatic transformations of six enthralling characters, Oppenheimer “writes with the assurance and historical command of someone who has been thinking about his topic for a long time” (The New Yorker). 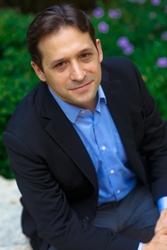 Daniel Oppenheimer is a writer and filmmaker whose articles and videos have been featured in The New York Times, The Atlantic, Tablet Magazine, and Salon.com. He has an MFA in nonfiction writing from Columbia University and is a Director of Strategic Communications at the University of Texas at Austin. Oppenheimer lives in Austin, Texas, with his wife and children.

“The wisdom, discernment, and erudition on display in this book are exceptional. After reading it, you may never think about why we believe what we believe in the same way again. Daniel Oppenheimer is a political essayist for the ages.”
—Rick Perlstein, author of The Invisible Bridge

“This is Oppenheimer’s first book, but he writes with the assurance and historical command of someone who has been thinking about his topic for a long time. The colors of his own flag are hard to discern, which makes him a reliable guide. His sympathy goes to the candidly conflicted, the nakedly shattered. He wants to know why people come to hold the political beliefs they do. Stories of apostasy, he writes, ‘are worth telling because it’s during the period of political transition, when the bones of one’s belief system are broken and poking out through the skin, that the contingency and complexity of belief become most visible.’ This quest is particularly relevant at a time when Americans are dug deep into two opposing trenches, and crossing no man’s land is a great way to get picked off.”
—George Packer, The New Yorker

“Thoughtful … Engaging … Exit Right grabbed me as few books have done in recent years. This is political history at a very high level, especially when American politics seems to reach new lows every day. … Oppenheimer is also a gifted storyteller, and the pages fly by.”
—Alan Wolfe, The New Republic

“[Exit Right] is flawed in the particular way that only great books can be. It fails to fully answer the impossibly ambitious questions it lays out, but its insights are so absorbing that it doesn’t matter [and] the prose is so perfect. … This book proves so satisfying precisely because it leaves you wanting much more. … Oppenheimer began with a book about the origins of political beliefs and ended with one about the literary force of political misgivings. They’re both worth reading.”
—The Washington Post

“Absorbing. … So quick to denounce or praise, and to demand to be told which side everyone is on, we forget that politics also offers parables of second thoughts and transformation. Ideological changelings, if we catch them mid-flight, remind us that ‘belief is complicated, contingent, multi-determined.’”
—Sam Tanenhaus, The Atlantic

“Call it natural evolution or ideological midlife crisis, but the figures profiled here … all turned away from the political left, either incrementally or in revelatory bursts. … Brilliant yet fallible, these apostates deserve our attention, Oppenheimer believes. Right or wrong, they ‘reckoned with themselves at the most terrifyingly fundamental level.’”
—The New York Times Book Review

“Exit Right is a book that every conservative should read and understand. It’s a fascinating, illuminating, deep-thinking look at some of the most important political transformations in American history. While few on the right will agree with every word that Daniel Oppenheimer writes, he’s always smart, provocative, and penetrating.”
—Eli Lehrer, president and co-founder of The R Street Institute

“A tour of the American left, seen through the eyes of six men who left it behind and turned to the right. … Instead of dismissing these controversial figures, Oppenheimer asks us to take them seriously, to analyze their disputes with the various lefts they were part of, and through them, to grapple with questions of loyalty, masculinity, identity, spirituality, and just where it is our political values come from.”
—Sarah Jaffe, Dissent

“Powerful and self-assured, even when addressing the exceedingly complex matter of why we believe what we believe.”
—Rayyan Al-Shawaf, B&N Review

“[A] confident debut. … [Oppenheimer] excels in portraying the personal torments and costs to his subjects in their transitional struggles…. The interplay between large historical movements and personal anguish is well-balanced and skillfully handled throughout. Whether his subjects are viewed as champions or apostates, Oppenheimer's insightful narrative should inspire some soul-searching among political believers of every stripe.”
—Kirkus Reviews, Starred Review

“[Exit Right] traces the path of six influential men…who moved from the left to the right, in ideological shifts that changed ‘the contours of American politics.’”
—Time

“A timely psychological political profile…Exit Right will inspire a self-examination of all political believers.”
—Fort Worth Star-Telegram

"With the deftest touch imaginable, Daniel Oppenheimer charts the course of these controversial lives through the ideological storms of the twentieth century. At once politically astute and psychologically probing, this is a vivid, scrupulous, finely intelligent book."
—Morris Dickstein, author of Dancing in the Dark and Why Not Say What Happened

"In this elegant and incisive look at six interconnected American ideological turncoats, Daniel Oppenheimer brilliantly explores the subtleties of belief and offers a fresh explanation for mid-century conservative advances. And the surprises keep coming: Who knew that it was a GE executive named Lemuel Boulware who nudged Ronald Reagan from left to right? Or that, if not for a bad book review from Norman Mailer, Norman Podhoretz may never have travelled so far across the ideological spectrum? Oppenheimer's eye for the compelling detail marries well with his literary flair."
—Jonathan Alter, author of The Center Holds

“Exit Right is a compelling and beautifully written work of political history. By tracing the stories of six individuals, Daniel Oppenheimer not only gives us a nuanced look at America’s rightward turn. He also tells a more elemental story about political action—about who we are and what we believe, and how those things can seem unshakeable one moment yet so tenuous the next.”
—Jason Sokol, author of There Goes My Everything

“Daniel Oppenheimer's Exit Right is well written, well researched, funny and full of charm and insight, and is perfectly poised to be the book to read as the country swings into the next election cycle. But perhaps even more remarkable than that: with Exit Right, Dan has managed to successfully explain the phenomena of both Ronald Reagan and Christopher Hitchens in the same book.”
—Manuel Gonzales, author of The Miniature Wife and Other Stories

“If it were just a series of sharply focused, incisive portraits, Exit Right would be riveting reading. The fact that they add up to a secret history of the American Left over a century of great tumult is a fascinating bonus. But most unexpectedly—and most valuably—it turns out to be a sort of philosophical mystery story: Are we defined, as we might like to think, by our strongest convictions? Or by our doubts?”
—Andrew Bujalski, director of Funny Ha Ha and Results

The People Who Left the Left and Reshaped the American Century

By Daniel Oppenheimer
LIST PRICE $17.99
PRICE MAY VARY BY RETAILER