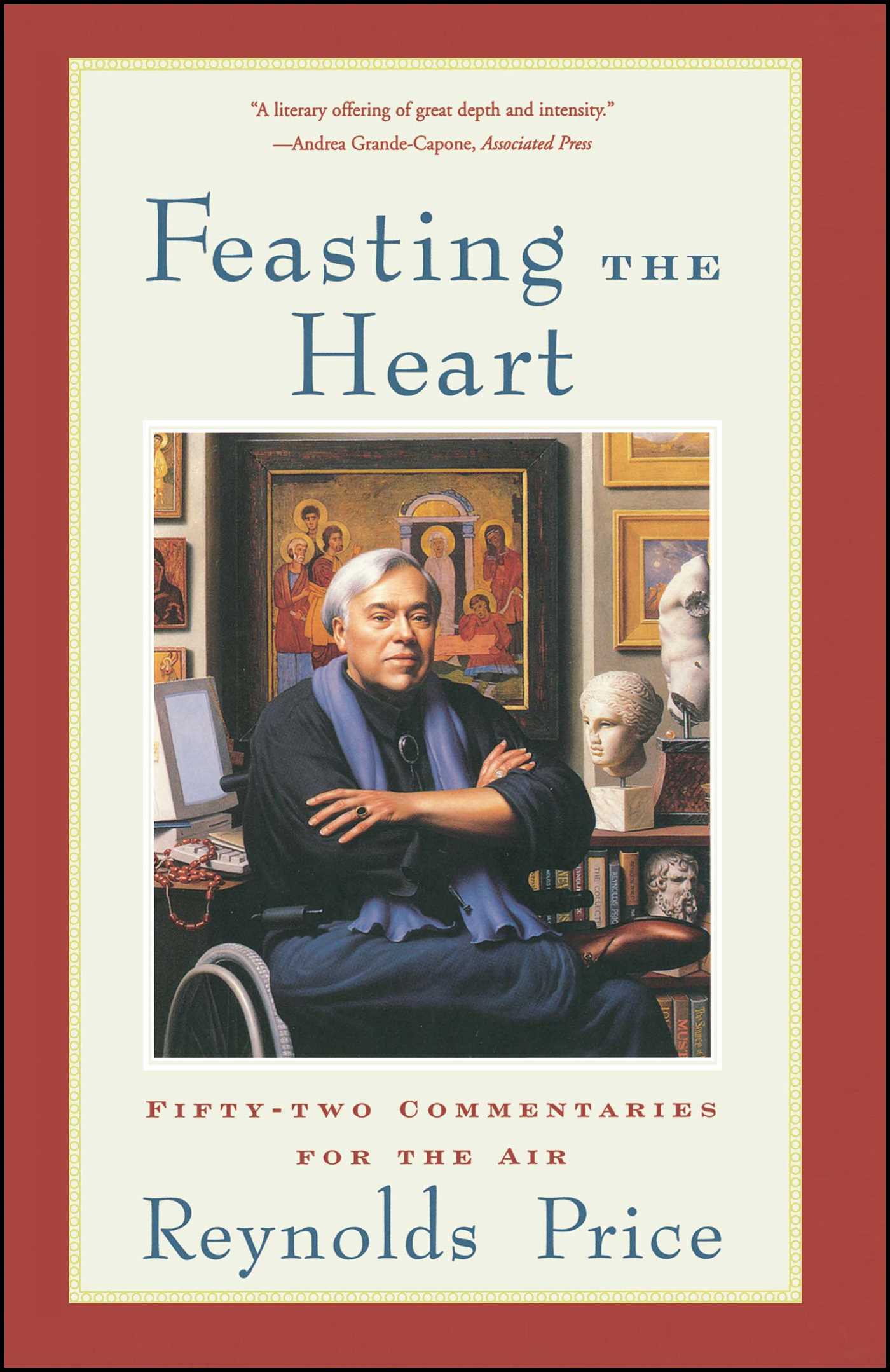 Where Does Author Reynolds Price Find His Inspiration? Find Out...

Novelist Reynolds Price Reveals Where He'd Like to Be in the World...

Fifty-two Commentaries for the Air

Ranging from his experiences as a writer to topics of faith and racial intolerance, Reynolds Price's stories from National Public Radio's All Things Considered showcase the author's consistent talent for lyrical prose and insightful observations—and all those stories are now compiled here in The Feasting Heart.

In the fall of 1993, Alice Winkler of National Public Radio's "Morning Edition" asked Reynolds Price to write a short story for a Christmas morning broadcast. This assignment would result in NPR's inviting Price to join its varied group of commentators on "All Things Considered." The laws of radio require a concision that became a welcome new discipline for Price; these are all the personal essays which he has broadcast since July 25, 1995.

Whether recounting events from his past, examining the details of his current experience as a writer, teacher, traveler, and general witness of the world, Price demonstrates in his direct prose that a writer can instantly connect with his audience. He discusses a few predictable topics—family, the poisonous mysteries of racial intolerance, and faith—but he also deals with new matters: capital punishment, Gone With the Wind, his adventures while navigating an immensely inaccessible America in a wheelchair; and he provides a memorable piece on childlessness.

Throughout, Price never loses sight of the origin of either the word or the spirit of the essay—the French word connotes a try, an attempt —and each piece here is a well-formed, revealing, often amusing, and refreshing foray into a moment unlike any we've encountered in other forms from him. We're unlikely to read more thought-provoking work from a commentator for a great time to come.

Chapter 1: A Christmas in Rome

I was twenty-two years old and still hadn't spent a Christmas away from home and family. That day though I was half laid back in unmarred sun on a bench in the one true Colosseum -- Italy, Rome, December 25th 1955. Europe had only begun to believe that the devastation of Hitler's war might be survived, and even in Rome the sight of a winter tourist was rare as a failure of courtesy.

I'd left my room and made my way down through the city past ruins posing in vain for their picture -- today they were empty of all but cats and ghosts of assorted psychotic Caesars, woolly Vandals and Visigoths. I'd even walked the length of the Forum and on across to the Colosseum with no sure glimpse of anybody as lost and foreign to the place as I and not a sign of holly and gifts.

I'd passed a few couples, sporting that brand of Italian child who easily seems the world's most loved; and some of the parents had bowed at my greeting. But the Colosseum was likewise empty of all but me and one of the bent old ladies who then sold tickets to everything Roman, toilets included.

So there, lone as Robinson Crusoe, I had one question -- was I lonely in this grand place on such a high love-feast? It seemed the right question for a journeyman writer. I shut my eyes to the broad arena that drank the blood of so many thousands and let the Mediterranean sun burn its health deep into my bones.

The answer was No. I was happy. I'd got the gene from both my parents; and despite a normally bleak adolescence, had been sheepishly happy most of my days -- sheepish because I wondered still if smiles were the kit for an artist's life. Even if I was here today on one of the world's great magnets alone, I knew I was backed with a travel grant; my first short stories were down on paper; more ideas were ticking in me; and -- best -- in only three more weeks I'd join my first requited love who was skiing in Austria.

What but love had I ever wanted more than the freedom I tasted now? So I sat for the better part of an hour in those two lights -- the sun and the fierce shine that leaked from my triumph. I was already well down the road to my work and my free choice of love. If another human being entered the Colosseum with me, I failed to see. So the place itself, for all its gore, conspired to keep my joy pure as radium, fueling my life with dangerous rays.

High as I was, I managed to nod awhile; and when I woke a half hour later, I knew the sound of a distant bell had brought me back; its toll had triggered the chill I felt. The light in the midst of the arena was dimming; and my mind spoke out, strong as the bell -- What are you up to this far from home on this day, of all days, and lonesome as any hawk on a thermal? What can you learn here that you don't already know in your bones? Get the hell on home.

If I'd seen or heard in the next two minutes the least reminder of the day at home -- an indoor tree, some merciful laughter -- I might have hailed the nearest cab and tried to board a westbound plane. But the guts of the Colosseum dimmed further till all I saw was purple murk -- the locker rooms of gladiators, holding pens for the beasts and martyrs. And I knew I needed this strange lone time in whole new worlds; so when I stood to enter the day, I turned -- not due north back to my room but south toward the Circus Maximus, flat on a plain below the devastated mansions of the Palatine Hill.

The film Ben-Hur with its chariot race was still four years ahead in time; but my high-school Latin book had showed the racecourse at its clamorous pitch -- the oval track, the island round which the horses had turned, the ranks of the seats. I stepped across one strand of wire and walked to where the island had stood -- no visible remnant of marble or horseflesh, brawn or fury. The ground was littered with modern paper, though there were signs of recent digging -- the earth was freshly turned and spongy.

Again no other human in sight. By now I was well into midafternoon. Surely Christmas mass was over; shouldn't some of the family meals be ending? What was the local Christmas schedule? Dinner at my pensione was not till eight and would feature salt fish. Even the beggars who walked the streets as late as midnight were under cover, real shepherds from the country who'd brought real lambs and homemade bagpipes with weird music more Arab than Western -- a firm recall of the shepherds' role in the birth at the heart of this darkest month.

It wasn't all self-pity then when I thought I'm the one lone man in Rome for the birth that turns the wheel of the year. I'd better aim back toward my room. I would write this day down anyhow and save some piece of an hour that suddenly threatened to down me. At the third step, my foot stubbed hard.

I leaned and dug up a piece of marble the size of my palm with a perfect vine leaf carved on its edge, plainly ancient. I looked around me -- still nobody, a few fast cars half a block beyond. I hid the marble deep in my pocket and walked ahead, my first real robbery. Before I'd gone another ten steps, I drowned the guilt by thinking It's all you'll get today, ace.

That was only the truth; and I'd got near the rim of the Circus before I saw two people blocking my path. Before I halfway understood, my first thought was Well, Christmas in jail; and I froze in place. But then I took the presence in.

A young woman maybe my age in a tan dress, a coarse brown shawl on her hair and shoulders, one hand on the child beside her -- a boy with filthy knees and a coat so tattered it hung in comical strips. Was he five years old or older and stunted? They were beggars surely but -- no -- their hands didn't reach out toward me, though their black eyes never flinched from my face.

I knew I had a handful of change, the featherweight coins worth almost nothing; and I dug in another pocket to find them.

Before I'd brought them to daylight though, the woman shook her head once -- No. She gave the boy a gentle push forward.

He came to me, solemn but sure; and when he stopped two yards away, he held his hand out clenched as if he offered a game.

I asked what he had.

He thought a moment, opened his fist and brought it toward me -- a dark disk, half-dollar size, that was meant to look old.

They were selling souvenirs, likely fakes. I smiled a "No, grazie," holding both my hands out empty.

But the boy reached up and laid the coin in my right palm.

I'd spent hours with a boyhood coin box; and when I turned the bronze coin over, I knew it was real with the profile of one of the saner Caesars, Hadrian -- worth maybe fifteen dollars. I still didn't need it and offered it back.

But the child wasn't selling. He returned and trotted to join his mother, never facing me and not returning to take the marble vine leaf I offered.

His mother's voice though gave me the first real news of the day. She stooped to the ground and scratched in the dirt to show where they'd just found the coin; then she launched a smile of amazing light and said what amounted to "You, for you."

I have it still, a useful gift. 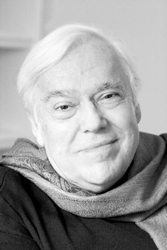 Reynolds Price (1933–2011) was born in Macon, North Carolina. Educated at Duke University and, as a Rhodes Scholar, at Merton College, Oxford University, he taught at Duke beginning in 1958 and was the James B. Duke Professor of English at the time of his death. His first short stories, and many later ones, are published in his Collected Stories. A Long and Happy Life was published in 1962 and won the William Faulkner Award for a best first novel. Kate Vaiden was published in 1986 and won the National Book Critics Circle Award. The Good Priest's Son in 2005 was his fourteenth novel. Among his thirty-seven volumes are further collections of fiction, poetry, plays, essays, and translations. Price is a member of both the American Academy of Arts and Letters and the American Academy of Arts and Sciences, and his work has been translated into seventeen languages.

Nicole Brodeur The Seattle Times An American master of words.

Publishers Weekly A panoramic glimpse of the writer's mind at work...a delight...an ideal introduction to this important novelist.

Max B. Baker The Fort Worth Star-Telegram Writing in clear-eyed, conversational prose, Price reaffirms his faith in mankind by remembering the healing power of everyday moments, no matter how big or small.

Fifty-two Commentaries for the Air

SEE ALL
See more by Reynolds Price
Thank you for signing up, fellow book lover!