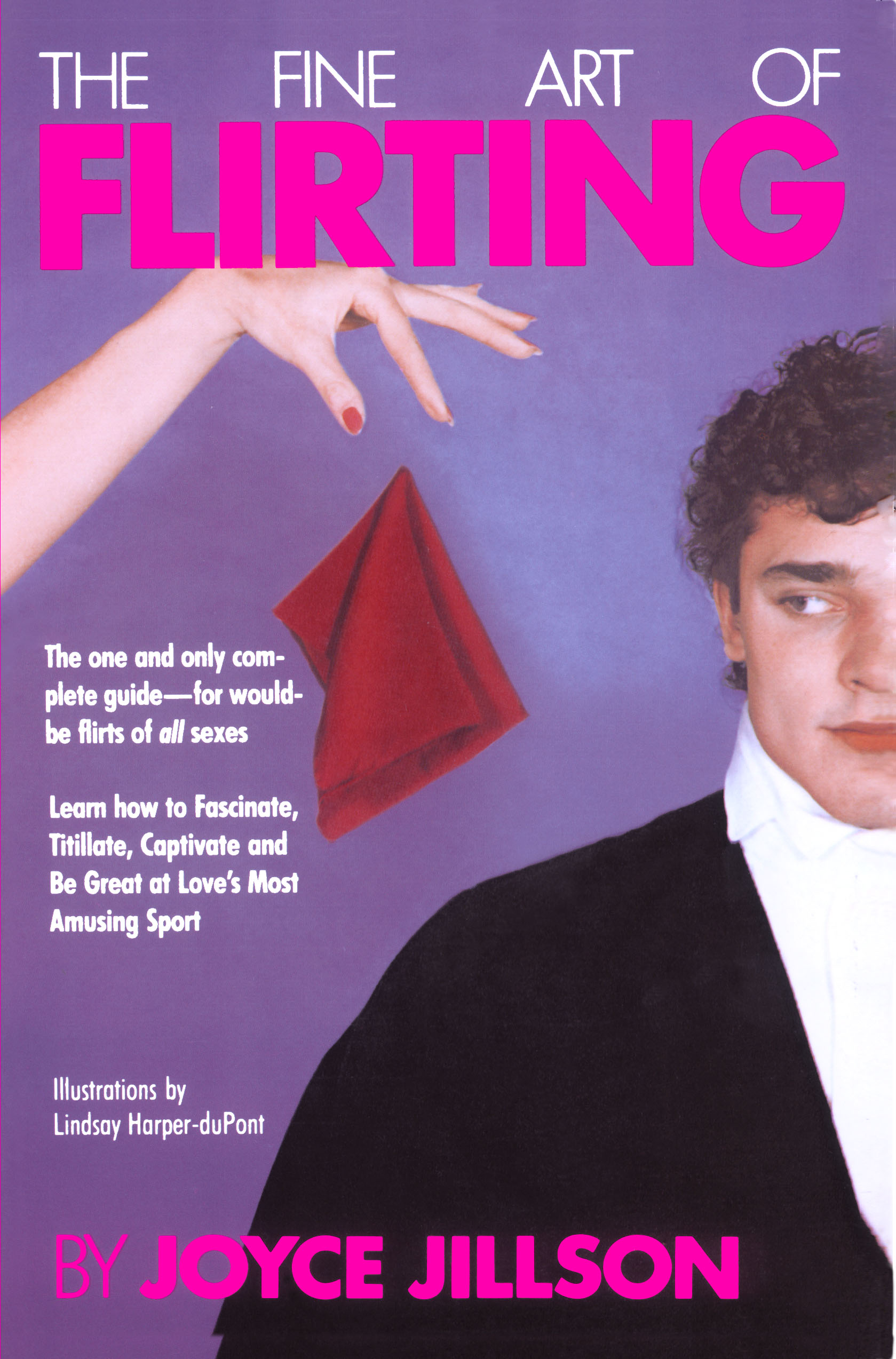 Joyce Jillson, popular TV personality and outrageous flirt, shows you how to spice up the game of love -- and intrigue everyone you meet -- by finding and flaunting your most bewitching self. Sharpen up your flirting skills by discovering:
* 25 ways to be a great flirt
* how to create an alluring first impression
* how to overcome the fear of flirting
* how to flirt anywhere -- at parties, on the job, while traveling, on the phone, in the car, at the health club
* how to dress fetchingly
* where to go, what to do, and with whom to flirt
* and many more tantalizing secrets
Whether you're a shy beginner or an advanced coquette or Casanova, Joyce Jillson's perfected flirting tips and secrets will soon have you charming the socks off everyone.

Recently, I Ran into a friend or mine, a thirty-two-year-old divorcée who is average looking, moderately successful, and a mother of four kids. She was just coming home from a weekend business seminar, with three great-looking men pestering her for more of her time. Most of my other friends are pining for ways to find one new man, and here was Cheryl with three.

Did she have a secret?

"I do what every woman thinks she's doing, but which she usually botches up. I flirt."

Come on, I thought. I know Cheryl. She's bright, funny, a good tennis player, but a flirt -- never.

But Cheryl told me something other successful flirts later confirmed. "Flirting isn't flirting if it's obvious. If you or any third person can tell, then I'm off target. The men and women who flirt the way they do in the movies are so off base that it leaves the field open for everyday, average people like me who care enough to have perfected the craft.

Yes, a skill. I learned it and you can too. And once you know the basic moves, your personal refinements will turn this skill into a fine art.

Because I have worked since age sixteen, I missed out on some of the social niceties. The proms, the dating, the parties. But I was lucky. An older friend, Lianne, an outrageous seventy-three-year-old flirt, took me under her wing. She had lived a fascinating life in Europe and was now married, but she still went out of her way to decry the erosion of romance in America.

I met her through her husband, a courtly patrician in his late seventies, who offered to play chess with me. Actually Laurence wasn't playing chess with me, he was teaching me, although he was always too courteous to call it that. I got progressively better, but never half as good as necessary to beat Laurence.

Then one day, Laurence was out of town, and Lianne and I got a chance to chat. She told me that she and Laurence thought I was improving. Then half in jest, half serious, I said, "He'll never let me get good enough to beat him."

Lianne was startled. "You know you have already surpassed him. He has never spent as much time playing with anyone, man or woman. And you could even beat him, if you would pamper him a little."

That was silly, I thought. Was it really an achievement if I had to use this kind of strategy?

Lianne said, "Life is strategy. You can destroy a building with a bulldozer, or you can be that rare individual who knows how to make a flute resonate so perfectly with the building that the windows crack and the foundations are undermined. You, my dear, are driving a bulldozer; but if you want I will teach you to play the flute."

What Lianne really meant by flute-playing was flirting. She thought people should flirt all the time -- with friends, with youngsters, and especially with the opposite sex. "How do you think I got Laurence?" (Laurence being a Boston Brahmin of some repute), she would brag. And the way she approached teaching me to flirt showed her consummate skill. She never called it "flirting" within my earshot, she called it "European charm."

So one rainy Saturday afternoon when I'd just found out my boyfriend was marching in a peace demonstration with another girl, my basic training in flirting began.ar

Though I learned, even took notes, about flirting, and thought it was fun, I had no idea how necessary it would become. Then I moved to Los Angeles to work.

Friends told me I would never meet anyone there because people never get out of their cars. Which turned out to be true. For the first couple of months I just worked, and met no one. But the gloom lifted when, in unpacking, I noticed Lianne's notes.

Could they work for me? On a whim, I decided to try them out. (I had nothing to lose, since I didn't know anyone.) But there were several obstacles. I didn't have a car. (I believe this is now against the law for singles in Los Angeles.) And, I don't happen to like the California look in men -- muscles, chains, tans, and sushi-breath. This ruled out a lot of eligible men. (In California, eligible is defined as any man whose wife doesn't live with him or whose wife or girl friend lets him have his own private telephone number.)

As a result, I greatly restricted my choice of flirting partners -- which you shouldn't do. (I now know that, on the right person, a tan can be very appealing!) Yet...I had phenomenal luck. I had so much luck that I would give out my best girl friend's number instead of my own to men, so she could share in the fun. Of course, the fun didn't last long...I fell in love. And my women friends took this as evidence of my stinginess, because the phone calls to their numbers ceased.

Lianne has passed away, and her secrets might have been lost if I hadn't been talking with my friend and editor, Barbara Gess, one day. Yes...about life and love and romance and...flirting.

Barbara asked me to jot down my notes about flirting. But I wanted this book to be a compilation of many different flirting styles, and I wanted this book to be not for women only. So I asked the men and women who are always surrounded by members of the opposite sex for their secrets. Not love secrets or sexual secrets, but flirting secrets. I found that between Lianne's old-world charm and the modem-day style of these flirts, there were many similarities. Perhaps, the essence of flirting could, indeed, be set down in writing.

One legendary fashion plate, a woman who has flirted with every man on both sides of the Atlantic, told me the idea she keeps in the back of her mind. "It's foolish to try to impress, or to make yourself into a sexual image, or to learn the right phrases. None of these work, because what is good for one woman will disgust the next. And goodness knows, every man I've ever known has had a completely different view about what is sexy. But the enduring trait, the one thing everyone agrees on, is friendliness. If you are friendly and warm, no one sees that as anything less than perfection. Why even at my age, women tell me I am flirting with their grandsons, when all I am doing is showing an interest in them. Down deep the core of flirting is friendship. You are putting your best foot forward to encourage a new relationship."

"Then why don't people say that flirting is friendship?" I asked her.

"If we called flirting, friendship, it would be too much good, clean fun, and in romance people want to think they've been a little bit naughty. Besides, with the opposite sex, if things are too understandable and ordinary, everyone loses interest."

A successful male flirt I know says, "Maybe extending friendship is a major part of flirting, but somehow when that friendliness comes from a woman it explodes into something more special than friendship. Or maybe I'm just fantasizing. Either way, it's very pleasant."

If you're wondering why these successful male and female flirts would want to give away their secrets, I'll tell you. Some say it's a boost to their egos to be able to talk about techniques they've applied for years. Others say they aren't worried about finding the field crowded with other flirts. Why? Flirting is so easy and requires so little effort, people won't believe it works.

A natural-born flirt, Joyce Jillson was the author of books including Real Women Don't Pump Gas and Joyce Jillson's Lifesigns. With her characteristic flair, she made headlines by reporting the entertainment news on the TV show "Break Away." She died in 2004.