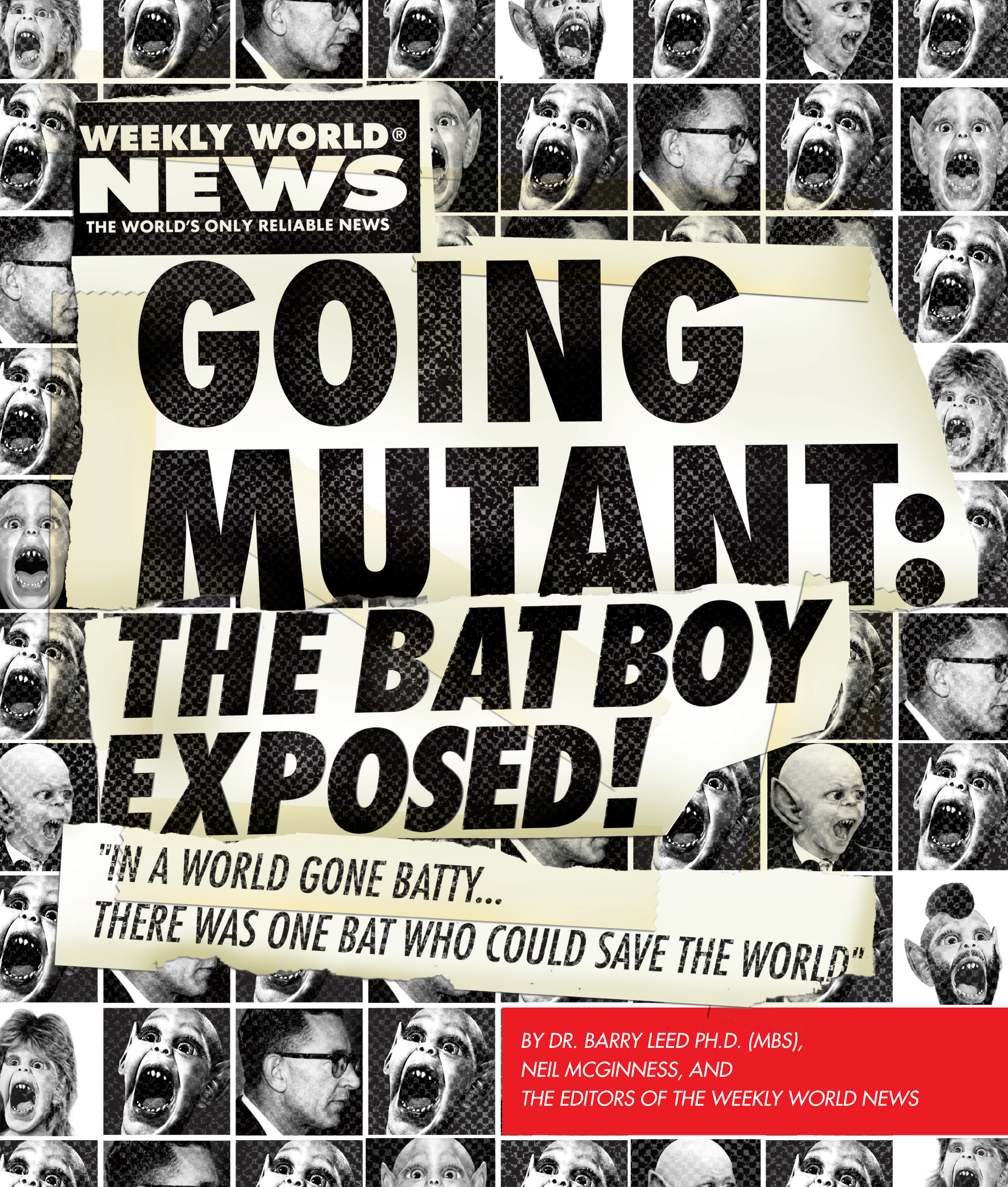 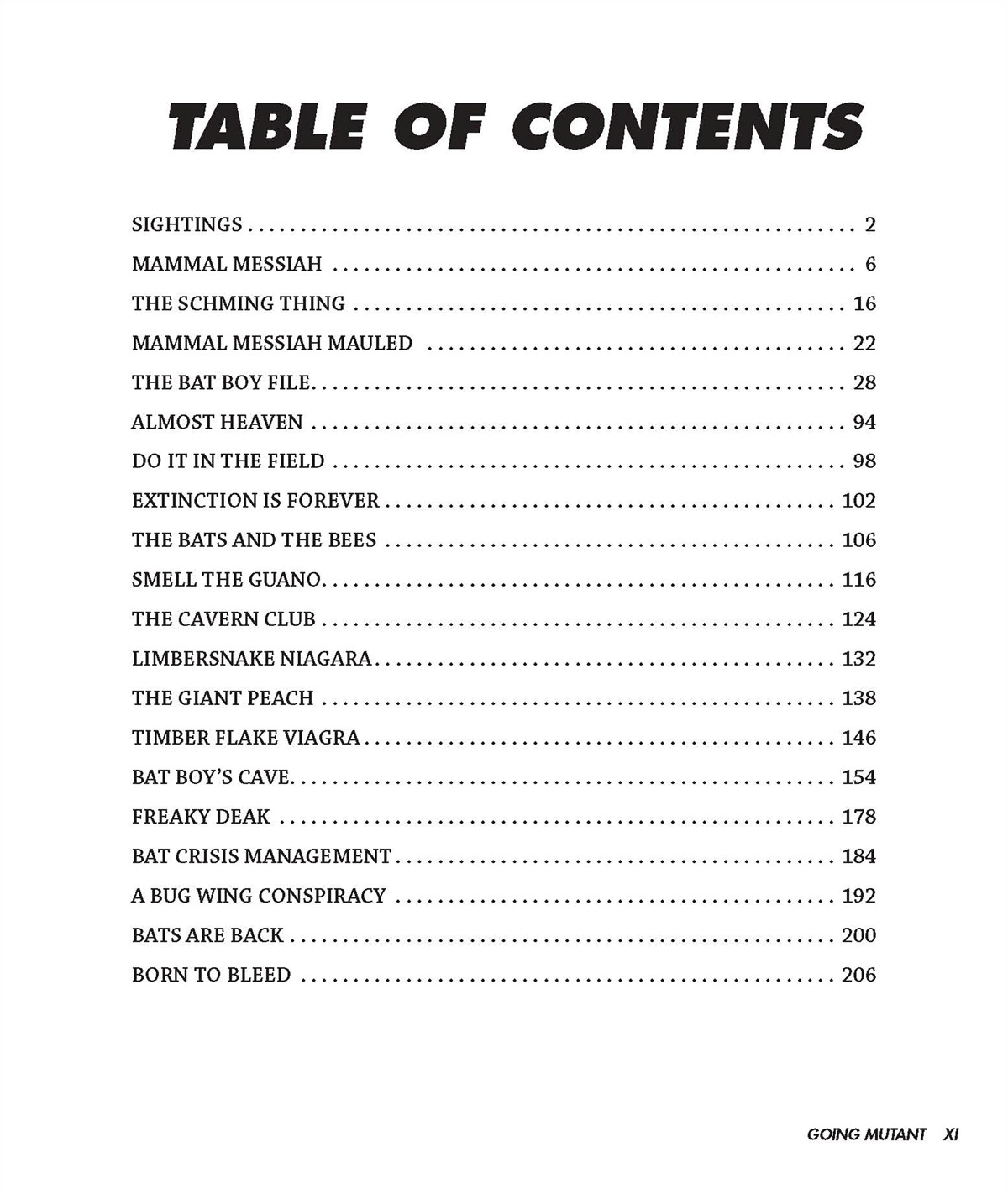 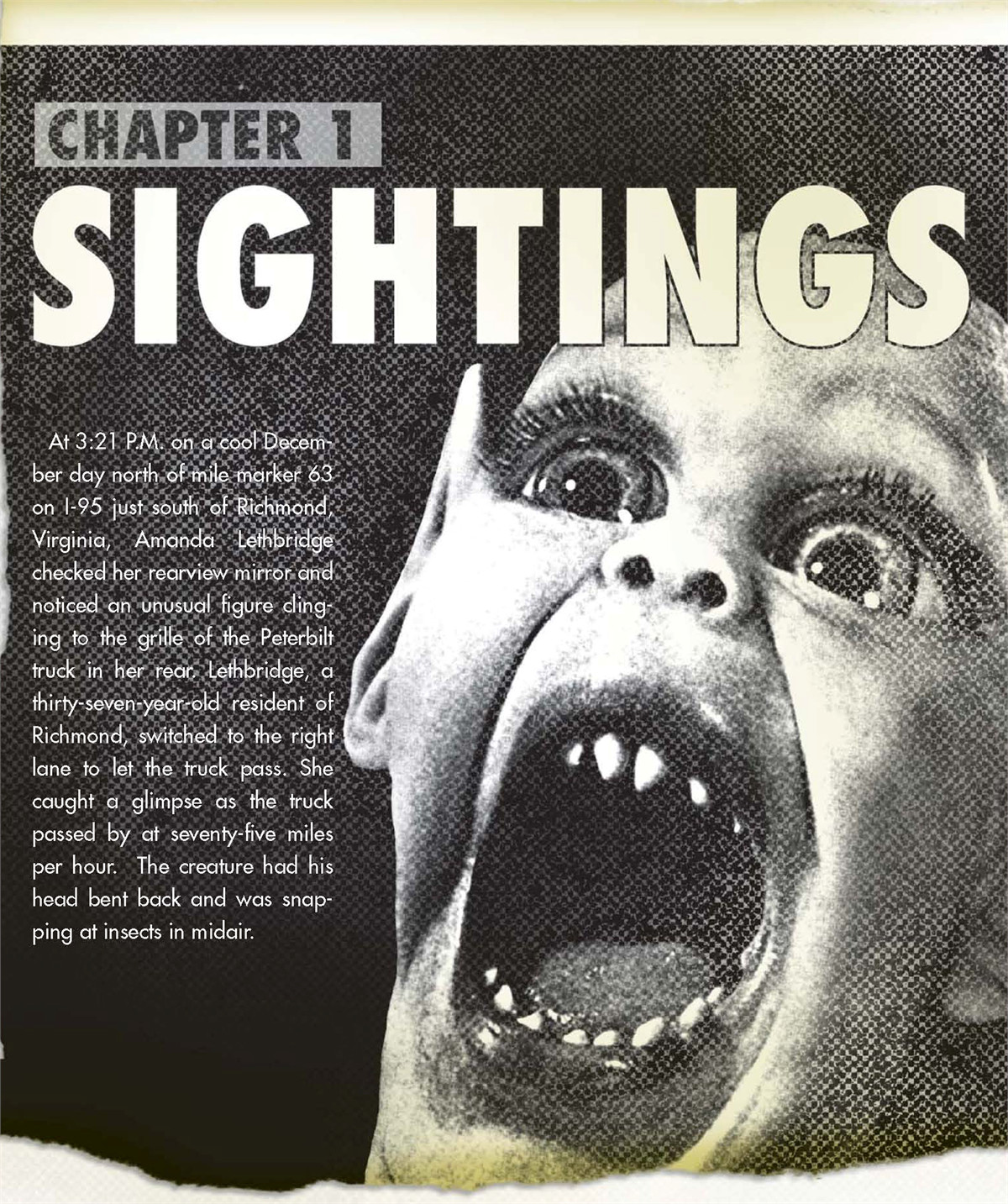 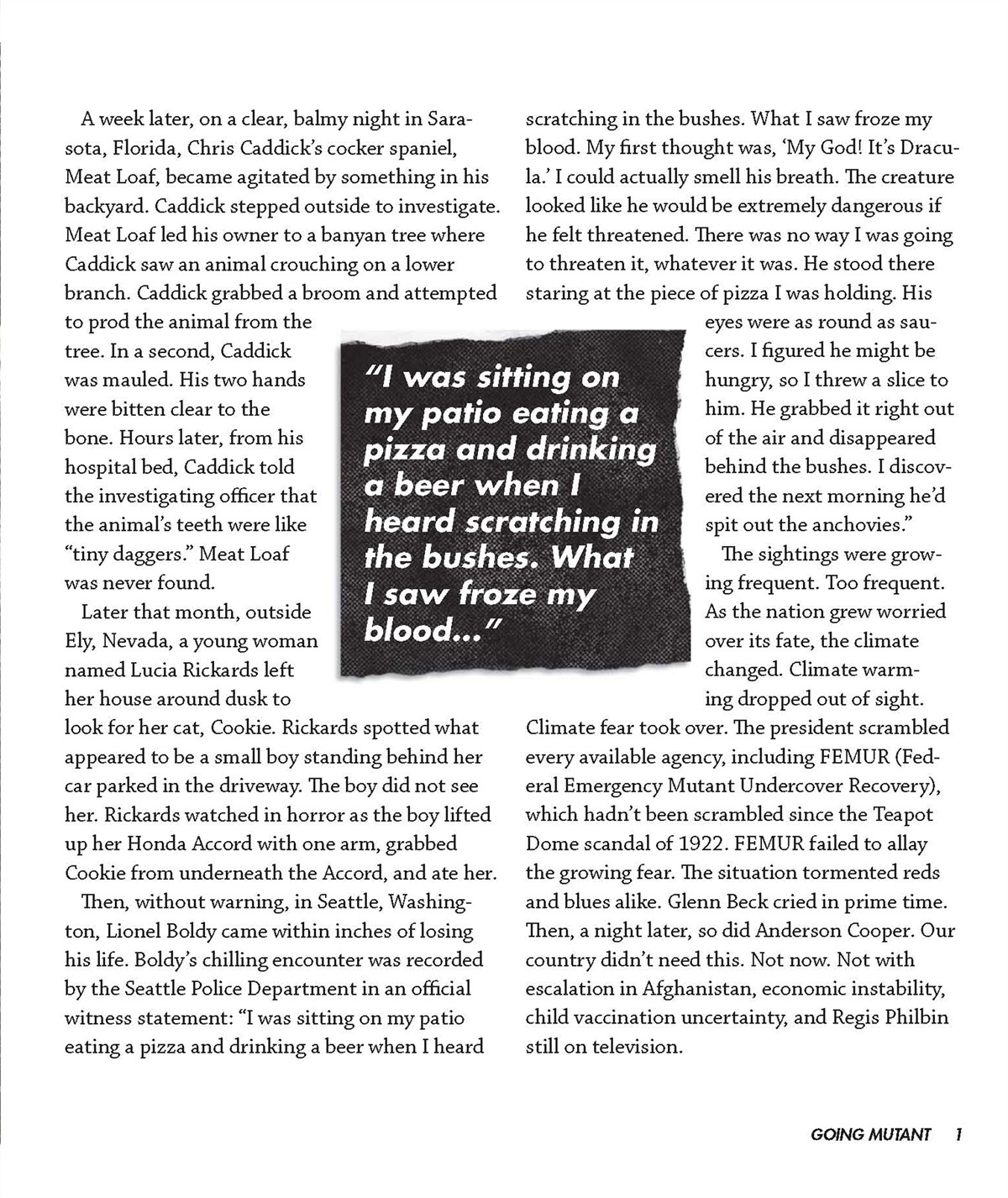 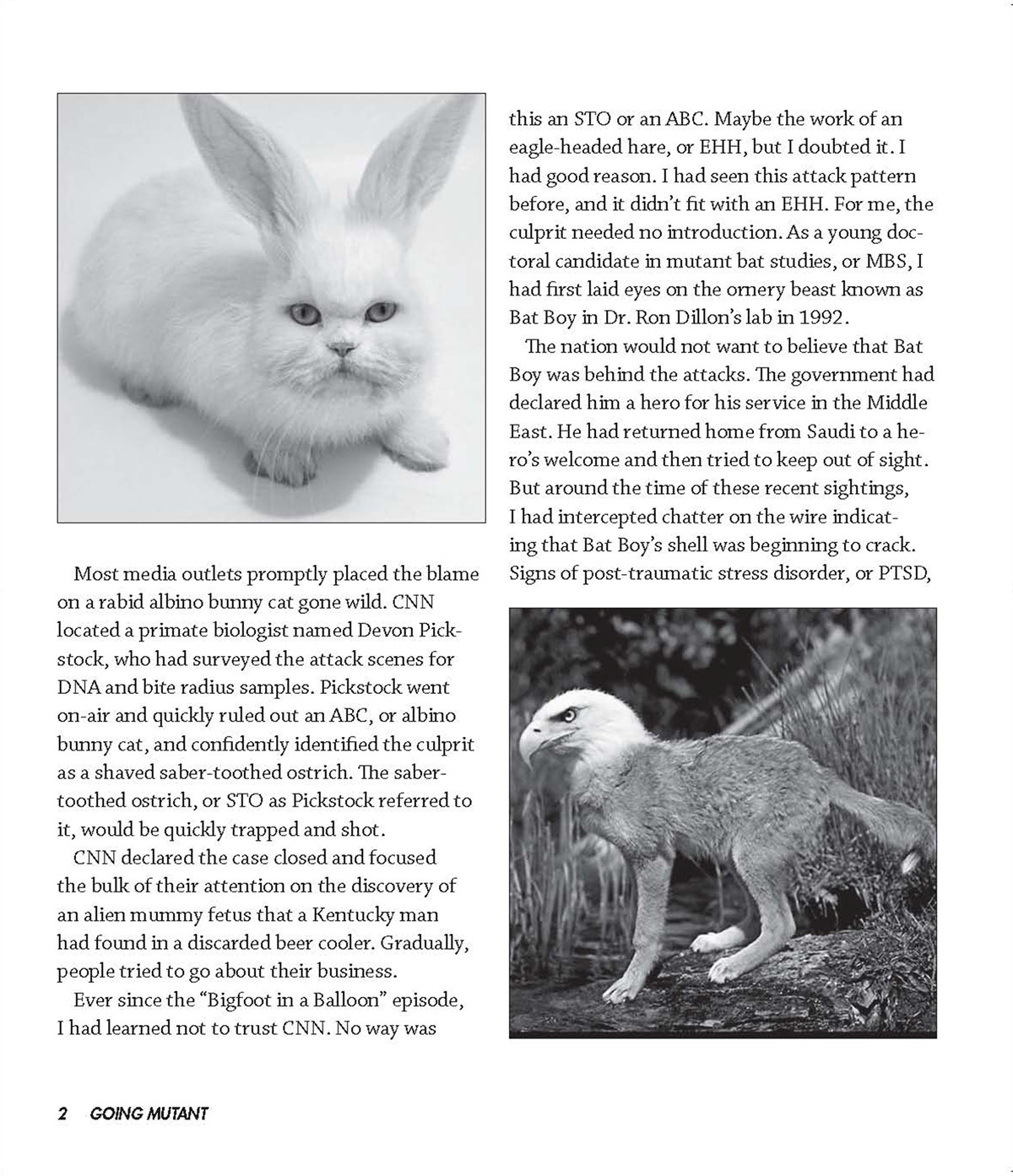 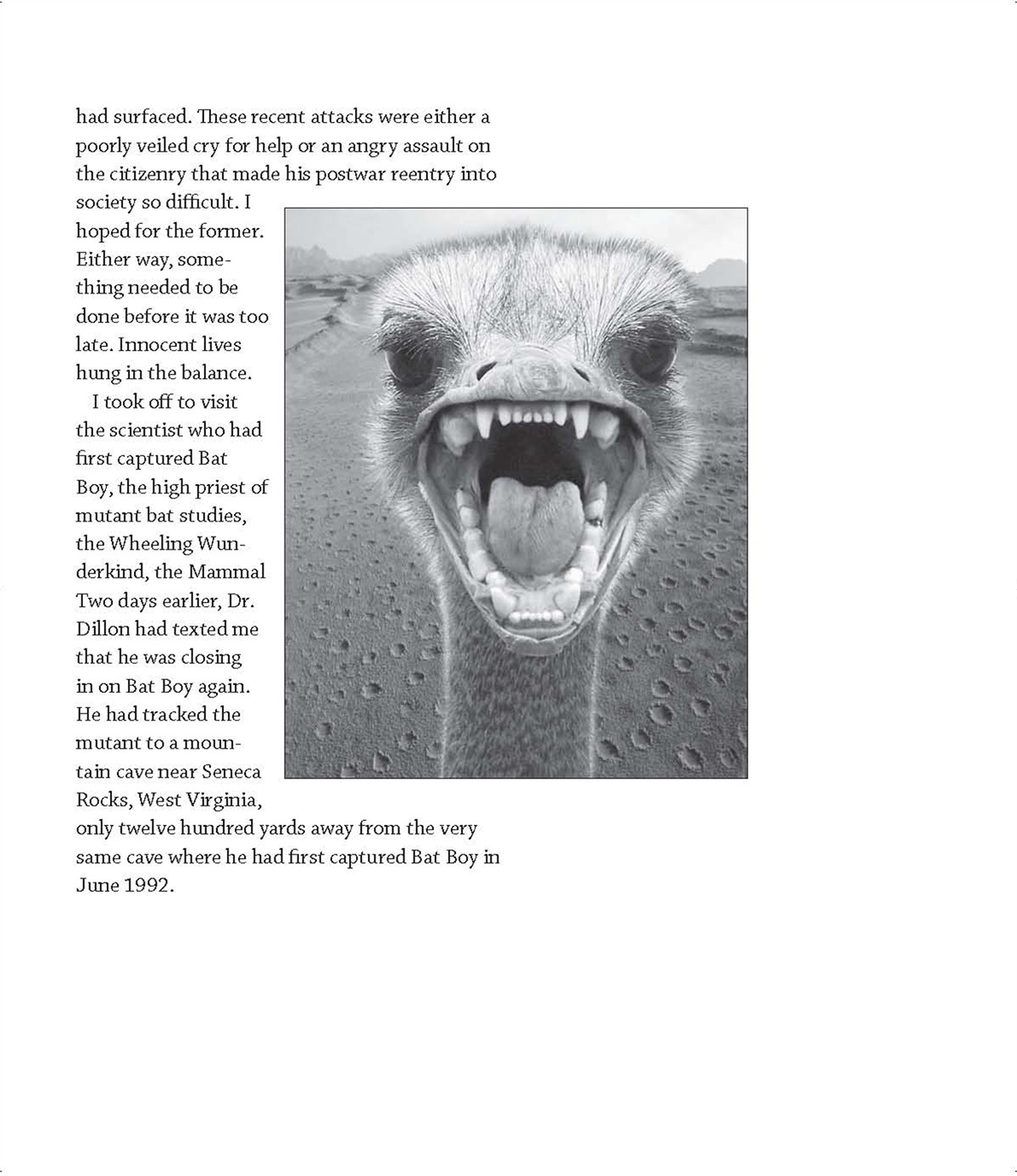 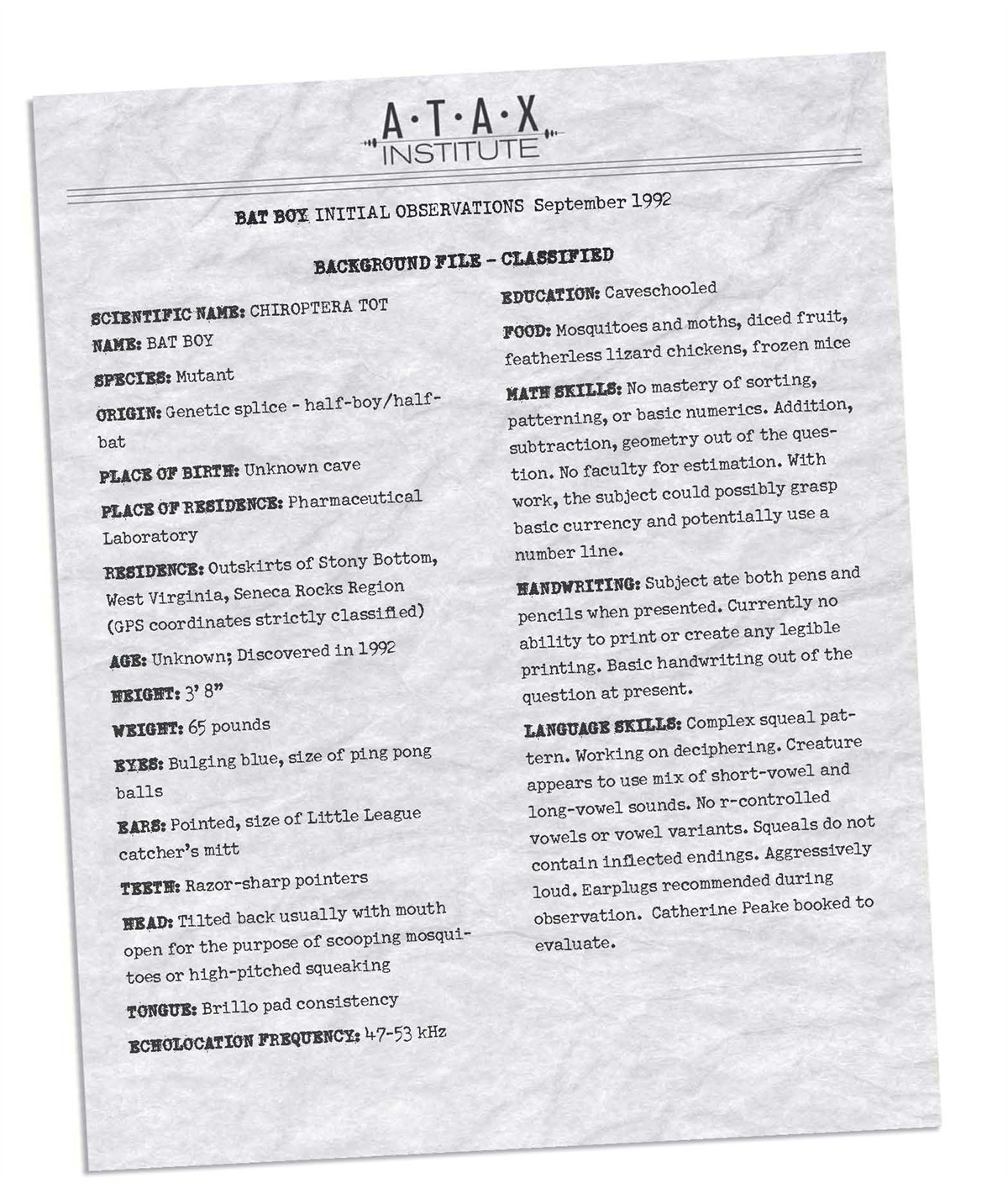 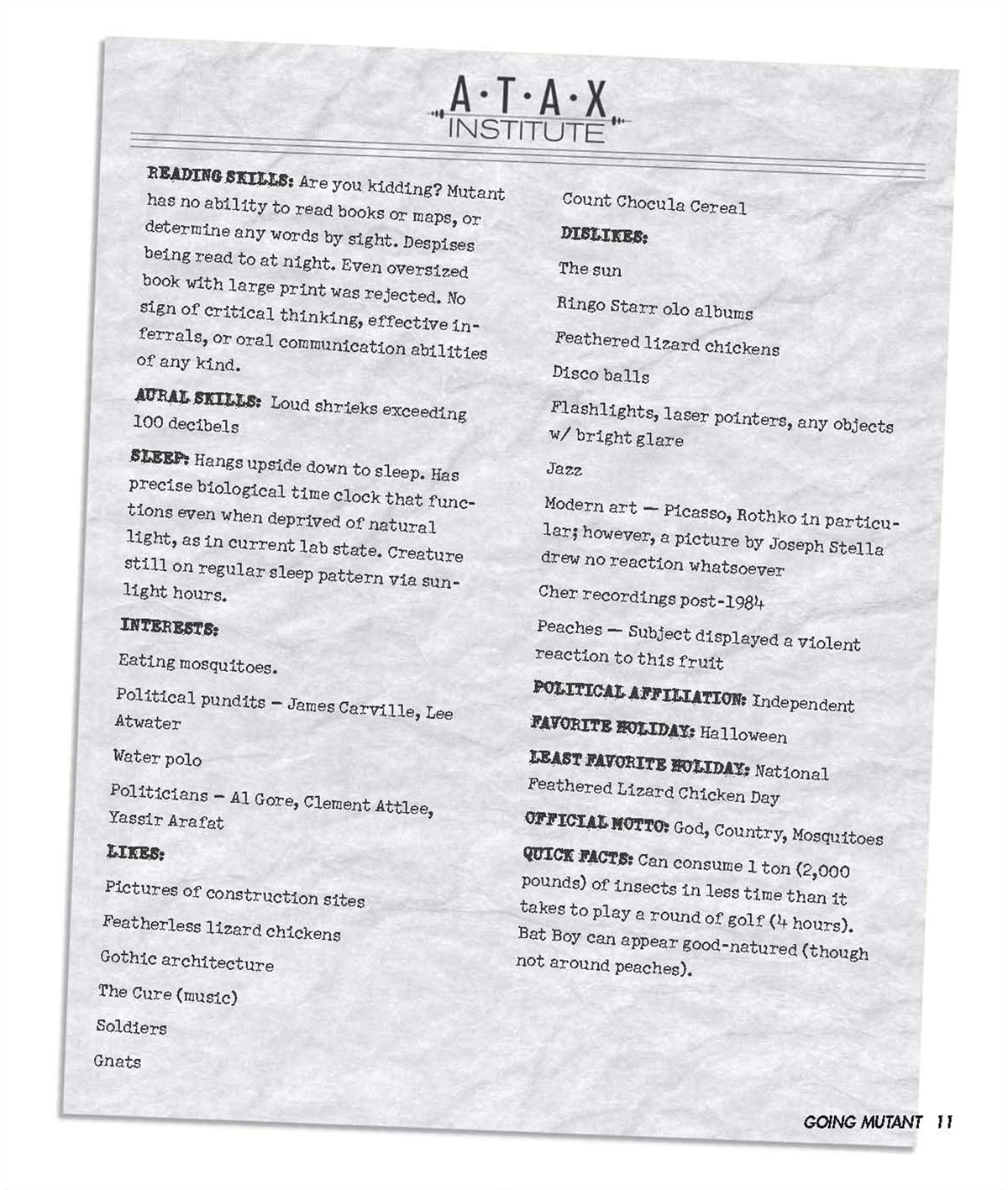 The Weekly World News team uncovers the definitive and faux-tastic story of Bat Boy, from his hardscrabble origins in the caves of West Virginia to his global influence in the twenty-first century. Going Mutant reveals how Bat Boy has heeded a call to service that has embarrassed less forthcoming mutants: During the Gulf War, he deployed with the Special Forces. He later earned a special commendation from George W. Bush for his use of sonar, which led troops to the spider hole housing Saddam Hussein. And now Bat Boy joins forces with an unlikely crew of soldiers, scientists, and swamp mamas to battle a global pandemic that threatens to destroy our planet.

This is an intimate look at the half-bat/half-boy, who has until now been shrouded in mystery (despite countless sightings and a megahit musical). Here, Bat Boy’s life is illuminated through a series of public and private documents obtained by the equally mysterious Dr. Barry Leed of the University of Indianapolis and through Weekly World News clippings. All this information comes together in this new Bitingsroman that reveals an archetypal American trickster who has risen from his lowly origins to become America’s favorite freedom fighter.

With additional material from the editors of Weekly World News:
Karl Benjamin and Jonathan Shipley

This book contains classified, personal, sensitive files concerning Bat Boy that have never before been made public. If you purchased this book without a cover, you should be aware that this book may have been stolen property and reported as “unsold and destroyed” to the publisher. In such case neither the author nor the publisher has received any payment for this “stripped book.” The cause of this “stripping” is likely Bat Boy.

Bat Boy has a vested interest in halting distribution of this private material. Rather than pursue appropriate legal channels, the mutant has decided to bite the cover off the book wherever possible.1

In the probable event that Bat Boy mauls this book, the reader is strongly recommended to wear animal-trainer-approved padded mittens2 while reading.

WARNING #2: USE OF THIS BOOK AS AN AX

Kafka once remarked that a book should serve as an ax to break open the frozen sea inside us. If you have a frozen sea inside you, please do not use this book in an axlike manner to break it apart. Instead, remain calm and seek the advice of a medical professional or certified MRI technician.3

If you are being attacked by Bat Boy while reading this book as referenced in Warning #1 and would like to use this book as an ax to fend off the mutant, you should do so only at your own risk and only if equipped with animal-trainer-approved padded mittens.4

1 Knowing that Bat Boy would likely target innocent readers of this book, Weekly World News had recommended that the book come equipped with a mirror attached to a telescopic antenna that could be extended during reading so that the reader could easily detect oncoming danger. The mirror would function like those wide-view mirrors that you see nailed into a telephone pole on those blind driveways that are really hard to pull out of with your car. Weekly World News was informed that this would not be possible. Sure, we can make Kindles that whisper-sync downloadable e-books in more than one hundred countries with GSM/EDGE wireless modem connectivity, but somehow we are still unable to affix a metal antenna with a mirror on your everyday book to prevent attack from mutants. So much for progress.

3 If you are claustrophobic and resistant to the idea of an MRI, or if you are heavyset and do not fit into traditional MRI chambers, please be advised that new advances in MRI technology have allowed walk-in patients greater freedom of movement during the procedure. In many cities, a new technology called stand-up MRI is available. This is equipped with a motorized patient-handling system that allows a patient to be scanned while in a normal upright standing position. The freedom of movement during this procedure is remarkable and many patients can get scanned while watching television or reading a book. In the event you decide to consume media during your stand-up MRI, we prefer that you choose to read a book. In particular, we recommend this book.

Bear Grylls is an idiot.5 Grylls, a popular television host, disparages bats every chance he gets. Popping his head outside an Ecuadorean cave in the Andean jungle: “If there’s one thing I don’t like, it’s bats.” Inside a cave deep within the Panamanian rain forest: “I don’t like bats. They bite and have rabies.” In his interview with Outside magazine: “I hate bats.”

How can an outdoor expert who injects himself into the most untamed areas of Earth make such inane comments? How can he spread dangerous misinformation on bats to the millions of couch-bound Americans watching his choreographed mock-struggle to survive?

As responsible members of this planet’s ecosystem, we cannot tolerate Bear’s “battitude.” Sure, it’s okay to delight in watching this telegenic, strapping young man traverse jungles eating elephant dung, mealworm grubs, and discarded decaying animal carcasses to survive, but when the man disparages bats, that must not be taken sitting down.

Bats save our planet nightly by eating millions of tons of harmful insects. Should something happen to our bat population, as you will see in this book, the consequences would destroy our ecosystem. According to the ATEX Institute, if the bat population were compromised, the resulting destruction of food crops from insect damage would plunge ninety-three countries into famine overnight—and that’s in Africa alone.

If Bear Grylls wants to capture the true hero of our wild planet, he should instruct his director to turn the camera away from himself to film bats emerging at dusk to devour bugs. Without bats, Bear Grylls would not have a show because he would be devoured alive in the wild places he likes to roam.

We need more public figures who will stand up to profess their admiration for these noble creatures that save our planet.

One public figure who dares to take this stand is Bat Boy. As you are about to read, this American hero, when faced with a raging pandemic called white-nose syndrome, took the disease head-on without regard for his personal safety. He fought valiantly and saved our planet even when our own president could not. In the end, Bat Boy’s sonar provided the audacity as well as the hope.

5 Forewords these days are typically reserved for glowing comments about a book from some kind of celebrity. Foreword author Glenn Windeatt and Weekly World News decided to turn that on its head by disparaging this otherwise harmless television sensation: Bear Grylls. In fairness, this decision was aided by the fact that the numerous requests to write forewords that were submitted to Simon Winchester, Noam Chomsky, Soupy Sales, Hugo Chávez, Bear Grylls, and Batman all went unanswered. Mr. Grylls is not an idiot. Additionally, he is powerfully built, and when he strips down to a mere loincloth he possesses what appears to be a diver’s body that makes us want to spread his nation’s national treat, spotted dick pudding, all over his interstitials. Grylls also claims that he spent time in the British Special Forces. That alone is enough to make our Argentinean Falkland Islander staff member cower in our coat closet muttering, “Dios mío,” and wishing we were never linked to the comment above. Still, we should all agree that American television airwaves should be restricted to natural citizens and not misappropriated by British hams such as Bear Grylls, David Attenborough, Simon Cowell, Angela Lansbury, Laurence Olivier, and Thomas Selleck. Exceptions to this rule would apply in the cases of Kate Beckinsale (for obvious reasons) and Marty Feldman (posthumously, as he had Bat Boy’s eyes). Nonetheless, we do agree that Grylls needs to study bats and stop crying like a little pantywaist whenever he comes into contact with these noble creatures that save our planet every night.


A Letter of Introduction

When the author of this book, Dr. Barry Leed, first entered our office, we regarded him with some suspicion. He was, after all, attempting to sell us private information on our own stock-in-trade, Bat Boy. It was also not a convenient time for a discussion. My management team was working around the clock on our bid to buy the Boston Globe and my two ace reporters had headed north to get the story on the Shroud of Cobain, a startling formation of dust on a Canadian playground that bears an uncanny resemblance to the late grunge singer.

As it happened, our deal on the Boston Globe unwound at the eleventh hour thanks to a duplicitous, fee-grubbing banker who is currently doing seventy-five years upstate. Simultaneously, Dr. Leed came back to the table and offered to dramatically reduce his price for us to buy his story.

With time, then, to focus on this Dr. Barry Leed, or Dr. Squealgood, as he was known in his substitute science teaching classrooms, we performed a thorough background investigation. He checked out. Indeed, he had graduated with a PhD (MBS) from the University of Indianapolis, had served as a graduate research assistant in the lab of Bat Boy’s discoverer, Dr. Ron Dillon, and had also guest-lectured in many well-known caves around the East Coast. The documents that he showed us, now contained in this book, were remarkable.

Our rancor-filled negotiation behind us, you now hold in your hands the most complete collection of Bat Boy’s personal mementos, writings, art collection, personal recordings, private space photos, and Facebook updates. And thanks to the work of Dr. Squealgood, we now have proof that Bat Boy has shaped the course of modern events (and also knows how to bake a mean mosquito pie).

Yes, this book was published without Bat Boy’s cooperation. We recognize that by publishing this work we shatter Bat Boy’s privacy forever. But we do so with the noblest of intentions: to show the world that Bat Boy should be loved as one of us. For, as you will learn, mutant bat species are living creatures just like us. Perhaps even more like ourselves than ourselves.

Led by Neil McGinness, Weekly World News, has inspired hit feature films, television shows, and musicals. Rooted in the creative success of over thirty years of supermarket tabloid publishing, the company recently joined forces with Steven Spielberg’s Dreamworks Television to develop new entertainment properties. Bat Boy first debuted as a Weekly World News cover story on June 23, 1992, and the original front-page photo of Bat Boy was the second bestselling issue in the tabloid’s history; it has since evolved into a pop-culture icon. Bat Boy currently stars in his very own musical, Bat Boy: The Musical, which in 2010 will be performed over 200 times in over 20 different states and countries. The original off-Broadway production of the musical won wide acclaim and awards, including both the Lucille Lortel Award and the Outer Critics Circle Award.

“Bat Boy represents all that is crass and despicable in American culture.” —Al Gore

"You’re a tramp, Bat Boy. I don’t care what you say. You a tramp. Bat Boy, you just a tramp.” —Otis Redding

“More than Jay Gatsby, more than Huckleberry Finn, more than even Diane Sawyer, Bat Boy stands alone as this country's emblem of our resplendent yet ineluctable American dream.” —Mike Nichols