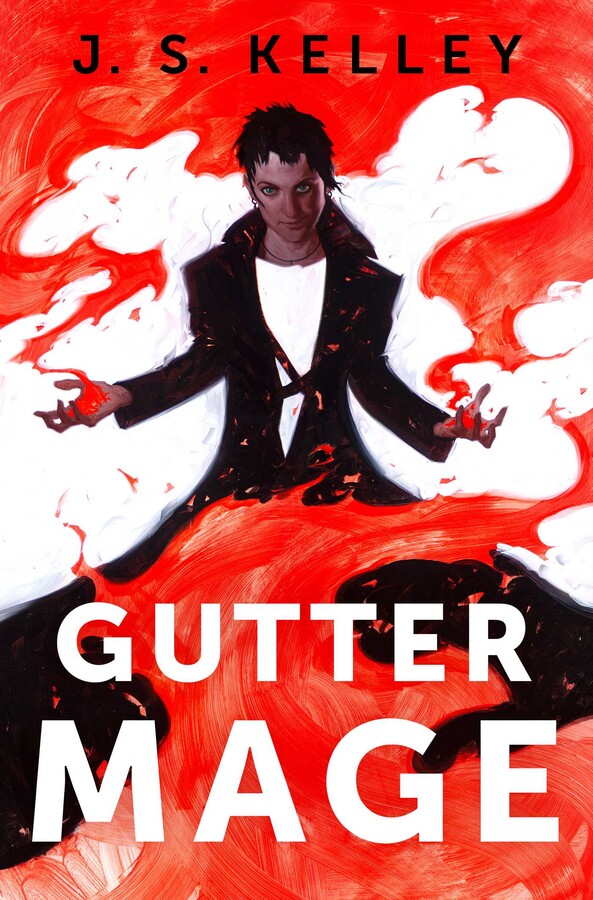 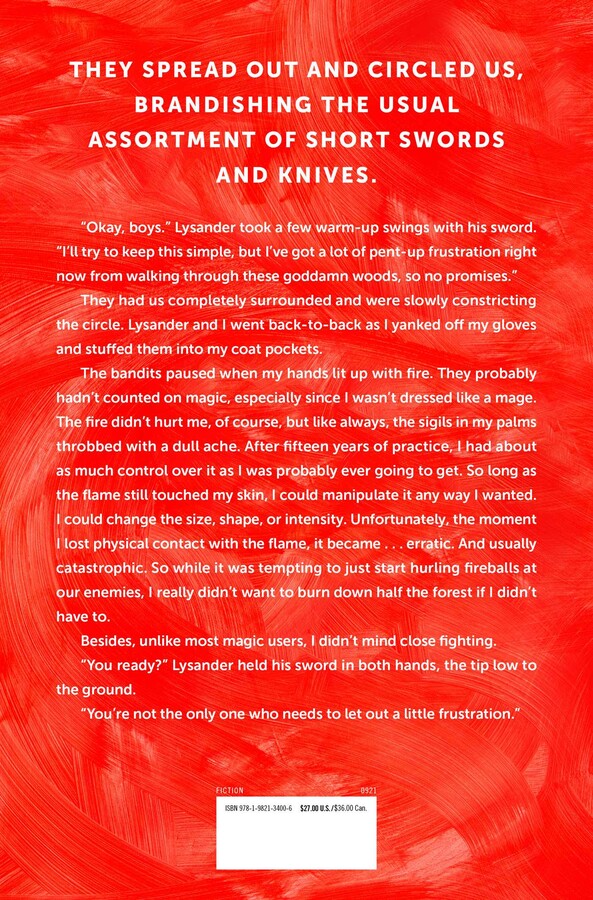 J.S. Kelley weaves epic fantasy and hardboiled noir in this fast-paced, twisting tale of magic, mystery, and a whole lot of unruly behavior.

In a kingdom where magic fuels everything from street lamps to horseless carriages, the mage guilds of Penador wield power equal to the king himself. So when Lord Edmund’s infant son is kidnapped by the ruthless Alath Guild, he turns to the one person who’s feared by even the most magically adept: Rosalind Featherstone, a.k.a. the Gutter Mage.

But as Roz delves into the circumstances behind the child’s disappearance, she uncovers an old enemy from her traumatic past and a long-brewing plot that could lead to the death of countless innocents, as well as the complete collapse of Penadorian society itself!

Chapter One ONE
The Skinned Cat was a tavern down in Quartz Harbor with an unsavory reputation. Not coincidentally, it was also one of the few places I was still welcome. I sat at a scarred wooden table, sipping whiskey while I waited for Lysander to show up. He said we were meeting a new client he’d found, and I was curious to know who’d be willing to meet us in such a notorious dump.

There were three guys at the next table getting drunk on the horse urine that passed for ale around here. They looked like the sort who maybe did some honest labor unloading cargo down at the docks when they had to, but would take something less legal and better paying whenever they could find it. Not that I blamed them. Honest labor was for chumps. The trio was already impressively drunk for noon, and their voices had been rising in volume with each round.

Other than the knuckleheads, the tavern was pretty quiet. Two men in neat, dark clothes sat in the back corner and whispered suspiciously over their tankards. Hired assassins, if I had to guess. The barmaid, Julia, looked haggard for so early in the day. Maybe she’d gotten back together with that blacksmith from Henslow and spent the previous night making up for all the sex she’d been missing out on the last few weeks. Apparently, it was the one thing he was good for.

Chester, the owner, was behind the bar, serving drinks to the usual line of sad, silent old men who grimly downed pint after pint to quiet the losses and regrets they’d accrued over their long lives. Or maybe just to escape the harping of their equally sad old wives at home.

“Hey, chickie, what the hell happened to your hair?”

It took me a second to realize one of the knuckleheads was addressing me. I was nobody’s chickie, and most people in this tavern knew better than to suggest otherwise. It was the hair comment that grabbed my attention. I admit it didn’t look great—it was unusual for anyone to have such short hair, and almost unheard of for a woman. But it wasn’t like I’d intended to burn most of it off, and frankly, I was still a little sore about the whole thing.

I looked the guy over. He clearly hadn’t bathed in a while, and his skin was blotchy with rashes, open sores, and probably some kind of fungus. His white shirt was stained red and brown down the front from past meals, and yellow under the arms. He leaned forward and gave me a big leer that I was probably supposed to take for a smile. The teeth he still had in his mouth were even yellower than his pit stains, except for the ones that were gray. He was also missing his right eye, and the socket was open to the air, a shriveled, puckered hole as dirty as the rest of him.

“What happened to your face?” I replied. “Get a glass eye or a patch at least. You look like you’ve got an anus in the middle of your head.”

I should have seen the sucker punch coming. But maybe I was a little drunk, or he was faster than he looked. I didn’t have enough time to dodge or block the quick jab to my face, but “luckily,” I had a lot of practice rolling with the punches.

I managed to rotate far enough that he hit me on the cheek instead of the mouth, which was nice because I really liked having all my teeth. But the force of the blow was still enough to send me toppling over backward. The furniture in the Skinned Cat had been through many fights before this one, and the chair beneath me groaned only slightly when we landed. My skull at least got some slight cushion from the sawdust strewn on the floor to soak up spilled ale.

I stumbled to my feet, feeling the pulse of pain on my face from where he’d clipped me. That would bruise up nicely. A trickle of blood ran down my chin, and when I touched my injury, I felt a small gash. I noticed he had heavy, ugly, metal rings on his fingers that seemed to exist for no other purpose than to make people who met his fists feel even worse. This guy was a real peach.

He was on his feet in a fighting stance, a grin on his face like he thought this was going to be fun. I looked down at the blood on my fingertips, then at the matching sigils branded into my palms: four triangles, each pointing in a different direction. Within each triangle was a symbol in the ancient language of Arch Pendoric that corresponded to one of the four cardinal directions, north, east, south, and west. Within the square in the center, where the four triangles met, was an eye and the Arch Pendoric word for “witness” or “watcher,” depending on context. The whole thing was enclosed in a double circle.

Those sigils could help me end this fight in the space of a single breath. It was tempting, but I didn’t want to burn down Chester’s tavern—like I said, the Skinned Cat was one of the few places I could still drink. And anyway, I’d hung my flame-resistant coat on the back of my chair, which was now pinned on the floor. The last thing I wanted was a stray flame from my hands burning my clothes off in public. That was an experience I didn’t care to repeat ever again.

I might have chanced it if his buddies had decided to join the fun. I was a decent enough brawler, but three against one would have been dicey. Thankfully, the other two seemed content to watch. So I decided to behave myself and just give this dickless piece of shit a good pounding.

He came at me with a big roundhouse. He was cocky, certain that since he’d landed the first punch, the fight was his. He didn’t realize that pain didn’t intimidate me, it just made me meaner.

I ducked under the roundhouse, blocked the left jab that I knew would follow, and slammed the heel of my heavy boot on top of his foot, feeling one or more metatarsal bones give way with a satisfying crunch. He dropped his guard as he howled in pain, so then I slammed my fist into his crotch.

There were people at various points in my life who had told me that I shouldn’t fight dirty. That there was a right way and a wrong way to fight, and punching a guy in the eggs fell squarely on the wrong side. The one thing all those people had in common was that they were entitled assholes who never had to go up against someone bigger and stronger than them. Not one of them was a petite, thirty-year-old woman with, let’s be honest, not a whole lot of upper-body strength. I did what I had to in order to not get clobbered or worse.

The guy gave a light wheeze as he bent forward and cupped his balls. I took the back of his head in my hands and kneed him in the face three times. He probably would have dropped after the second one, but I like to be thorough. I let him fall to the sawdust in a heap, where he lay, semiconscious and whimpering.

“You fucking bitch,” snarled one of the other two knuckleheads. They were both on their feet now, not looking nearly as entertained as before, and probably wouldn’t make the same mistake of underestimating me.

I looked down at the sigil brands on my palms again. Risk burning down my favorite tavern, or get my ass kicked? It was a tough call.

Fortunately, I didn’t have to make it.

“Whoa, hey,” came a familiar, deep voice. “Why am I hearing some less than gentlemanly language directed toward my partner?”

Lysander suddenly loomed behind the two knuckleheads. He was an unusually large guy, just shy of seven feet, with arms nearly as thick around as my waist. His parents had immigrated from the neighboring country of Lapisi, so his skin was light brown. He had calm dark eyes, a hard, chiseled face that was not unattractive, and a scar on his forehead that ran into his black hair, leaving a white streak to mark its trail. The thick handle of his claymore protruded from where it was sheathed on his back.

“These two jesters bothering you, Roz?” He placed a beefy hand on each of their shoulders as they both slowly turned and saw what they were in for.

I gave them a level look, then said, “I don’t know—are you?”

They mutely shook their heads.

“Great. Then get out of here. You’re upsetting Chester. And take your friend with you. I don’t think he’ll be walking too easy for a while.”

They took their companion by his gamey armpits and heaved him up with a smoothness that made me think this wasn’t the first time they’d had to haul him out of a tavern. Then the merry trio staggered through the door.

I righted my chair, brushed the sawdust off the dark coat that still hung from it, and sat back down. Thankfully, my whiskey hadn’t spilled.

“Come on, Roz.” Lysander sat across from me with a big show of weariness. “A client on his way to meet us here, and you had to pick a fight?”

“I was tired of waiting for you,” I said. “You know, punctuality is a sign of respect.”

“That so?” He reached across the table and took a sip of my whiskey.

“Being on time says that you value my time as much as your own, and you don’t want me to waste it by waiting around in this shithole for your big fat ass.”

J.S. Kelley is a single parent from Ohio who likes the whiskey neat, the coffee black, and the music loud.