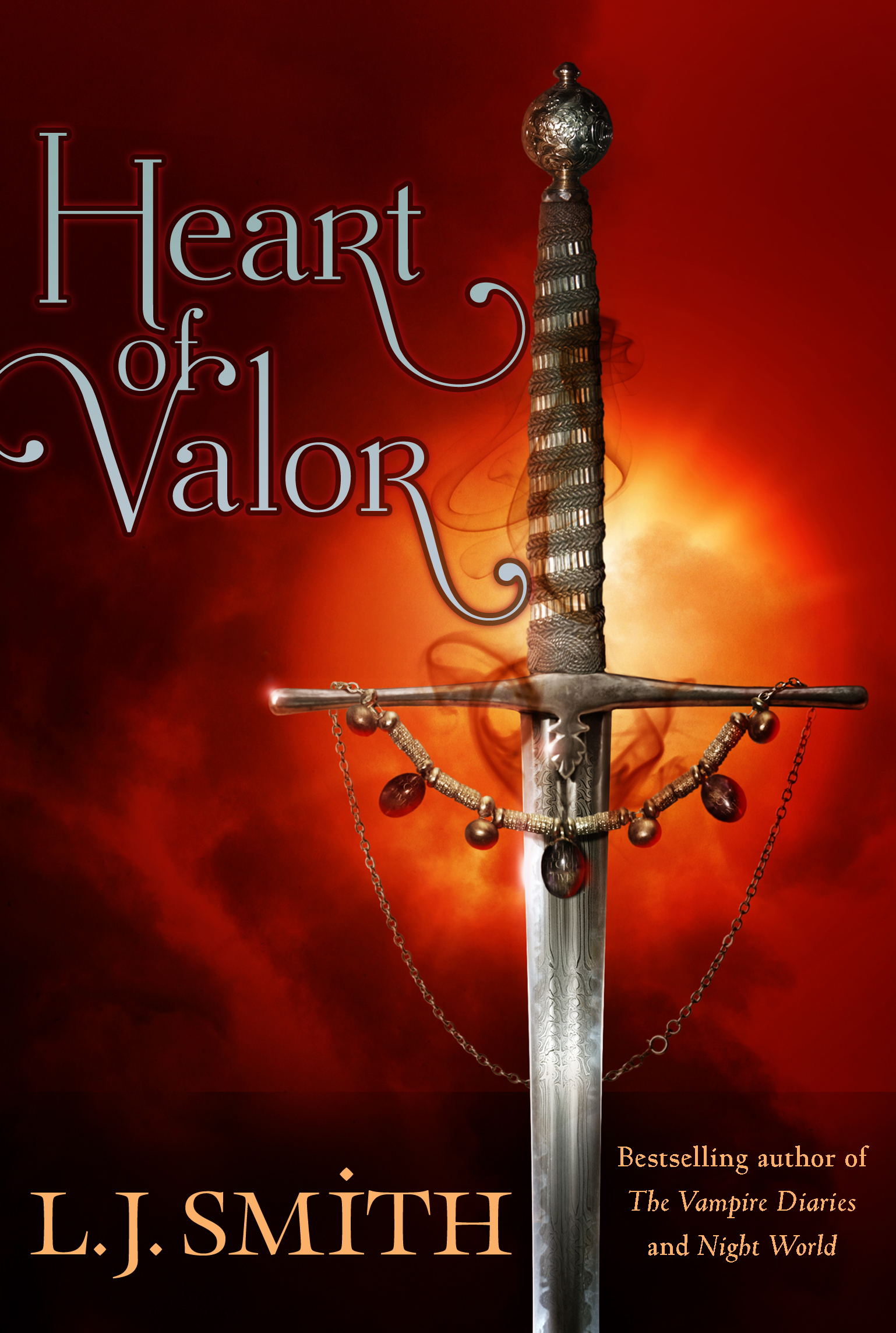 When an earthquake shakes California, Alys, Janie, Charles and Claudia suspect it isn’t just a typical earthquake. A year and a half after their journey into the Wildworld, they believe that the Passage between their world, the Stillworld, and that parallel universe of legend and danger may no longer be stable.

With their parents overseas and the great sorceress Morgana Shee traveling north to find the epicenter of the quake, the siblings are left on their own. But peril lurks around every corner. A magical attack sends the Hodges-Bradley kids’ on a journey that will test all of their skills, including Janie’s sorcery and Claudia’s ability to communicate with animals.

Morgana’s archrival, Thia Pendriel, is waiting. With Heart of Valor, the Forgotten Gem she has stolen, Thia’s power is almost limitless—and she is ready to spring her trap.

Claudia Hodges-Bradley twisted a strand of mouse brown hair around her fingers and frowned mightily, trying to concentrate on Mrs. Anderson’s review of this week’s spelling words. There would be a test this afternoon, and Mrs. Anderson’s tests always gave Claudia stomach cramps. She knew she needed to pay attention . . . but she would rather just listen to the birds.

At a steely glance from that lady Claudia jumped guiltily and stopped twisting her hair. Mrs. Anderson disapproved of hair twisting, pencil chewing, and nail biting, all of which Claudia seemed to be doing more of this year than ever before. Claudia was a square, serious child, whose blue eyes always looked a little anxious in class pictures. This year they usually seemed to look that way in the mirror, too.

Since she couldn’t twist her hair, she put a hand to her chest to feel the comforting bump of the charm beneath her shirt. It was so familiar she could see it with her fingers: the broad crescent of silver from which hung three stones: sardonyx, black opal, and bloodstone, each inscribed with spidery writing in the language of the Wildworld. Claudia couldn’t read any of the symbols on the stones, but she understood very well what the charm did. It enabled her to talk to animals.

Perhaps communicate was a better word than talk. Animal language depended as much on body movement—the tilt of a head, the flip of a wing, the quirk of a tail—as it did on mere sounds. Except when the message was meant to be heard and understood over long distances, like the killdeer outside daring anyone to come close to her nest. . . .

Claudia sucked in her breath sharply. The killdeer had been saying something quite different for several minutes now, and Claudia had just realized what it was. Automatically, she started to raise her hand to tell Mrs. Anderson, then hastily snatched the hand down again. The teacher would think she had gone crazy. Better just to wait it out. After all, there was nothing Mrs. Anderson could do about it. And maybe—Claudia brightened considerably—they wouldn’t get to the spelling test this afternoon.

And then her breath stopped, and her heart underneath the silver charm began to pound violently. Because it was the last week of April and the spring canned-food drive was almost over, and Mrs. Anderson’s class was winning. And the tower they had made with their 246 (as of this morning) cans of food rose high in all its symmetrical splendor against the wall on one side of the room.

Claudia could just see it out of the corner of her eye without turning her head. Remmy Garcia was sitting a foot or so away from it. Claudia liked Remmy. He kept white rats at home. She didn’t much like Beth Ann, who sat behind him, but as her sister Alys would say, that was beside the point.

Claudia started. She had twisted around in her seat to look at the cans; now she turned her agonized gaze back on Mrs. Anderson.

“Claudia, if you want to stare at your little friend, recess is the time to do it—except that you just lost five minutes of your recess. Do you understand?”

Claudia scarcely heard the titters of the class. She had to do something to stop what was going to happen, but she had not the first idea what. Even Alys, who was a junior in high school and could fix almost anything, couldn’t fix something like this. But still, she felt a strong compulsion to tell Alys. . . . No. Not Alys. Janie.

Janie might be able to help. Janie did all sorts of strange things these days. Most of them were of no use whatsoever, but some were. Feverishly, Claudia began rummaging in her desk for pencil and paper. She would write a letter to Janie.

“Claudia! Claudia Hodges-Bradley!” Claudia dropped the pencil. Mrs. Anderson was staring as though she couldn’t believe her eyes.

“Claudia, if you would just learn to pay attention, school wouldn’t be so difficult for you. Now you’ve lost ten minutes of recess.”

As the teacher turned back to the blackboard Claudia stealthily picked up the pencil again. She would have to be very careful; if she lost the last five minutes of recess, she would have no way of sending the letter. She wrote with her eyes glued to Mrs. Anderson’s back, only snatching a peek at the paper now and then. Writing was hard work for Claudia under any circumstances, and spelling a hopeless task even when she wasn’t rattled. Letters seemed to have a life of their own, jumping in and out of words and turning themselves upside down. When the note was finished she surveyed it doubtfully. She felt almost certain towwer was misspelled. But Janie was very smart, she told herself comfortingly. Janie would understand.

The recess bell rang. Claudia sat for ten minutes under the forbidding eye of Mrs. Anderson, trying not to twist her hair.

Claudia, a third grader, was not allowed on that playground. She didn’t know what they did to you if they caught you there—possibly suspended you as they had suspended Tony Stowers for hitting another little boy over the head with a bag of marbles. Probably sent you to the principal. She cast a glance at the teacher on yard duty, saw he was looking the other way, and began to slink.

She felt horribly exposed, the only child on an endless field of forbidden grass, and when she reached the fence she hunkered down, making herself as small as possible. She whistled. The dog, a sort of setter-spaniel mix with something vaguely Airedale about the ears, stopped scratching itself and looked surprised. It recovered quickly and trotted over, wagging its whole body and uttering short, sharp barks in an attempt to tell her how eager it was to do whatever she wanted it to do, how proud it was to have been chosen to do it, how valiantly it would try to accomplish the task, how—

“Be quiet,” said Claudia desperately. The dog groveled. “I need you to help me. You know who I am?”

“All right, well, I’ve got a sister—not my biggest sister, Alys, but the other one, Janie. She goes to the junior high school—the place across the street with lots of kids. You know that place?”

The setter knew it perfectly. Pizza in the cafeteria trash cans, rats under the Quonset huts, and gophers in the field. A wonderful place.

“Well, I need you to go there and find Janie and give her this note. Janie is—” Claudia stopped, overwhelmed by the task of trying to describe Janie in terms the setter would understand.

The dog raised its head off its paws and barked once, wriggling in delight. It knew Janie, too. Threw away half her lunch and smelled like magic. Nothing easier than to find her.

“Oh, thank you!” said Claudia, pushing her hand through a diamond of the chain-link to touch its wet nose. Then she carefully folded the note and poked it through.

“Now, go! Please hurry.” As the dog trotted away, letter in its teeth, tail high, pride in its commission showing in every line of its body, the bell rang again. Recess was over.

And Claudia was an ocean of grass away from her rightful place. Her only hope was to hug the older kids’ classrooms and get back to her room through the middle of the school.

There was, she discovered at once, a fatal flaw in this plan. Barring the way between the intermediate and the primary wings of the school was a chain-link gate. It was not locked, but Claudia knew she would never have the courage to touch it, much less open it. Besides, there was a teacher on the other side—her year-before-last-year’s teacher, Mr. Pigeon.

Mr. Pigeon had been a nice teacher. He had never made her name sound like “Clod-ia” or told her her writing looked like chicken tracks or her attitude was terrible. His class motto had been “All for one and one for all.” Claudia sniffled as she turned to go the other way.

“Claudia, what—?” But instead of finishing the question he looked hard at her face. Then he put a finger to his lips and opened the gate, beckoning her through.

Claudia walked until she was out of eyeshot, then galloped. She managed to slide into her chair just as Mrs. Anderson turned around to announce a spelling test. And then there was nothing to do but sit, pencil clutched in her fist, stomach aching, unable to ignore the killdeer outside. It was shrieking the same thing as before, over and over.

From somewhere a chaffinch added a note in counterpoint: “Take wing! Take wing!”

Claudia wished she could. It was all up to Janie now.

SEE ALL
See more by L.J. Smith
Thank you for signing up, fellow book lover!