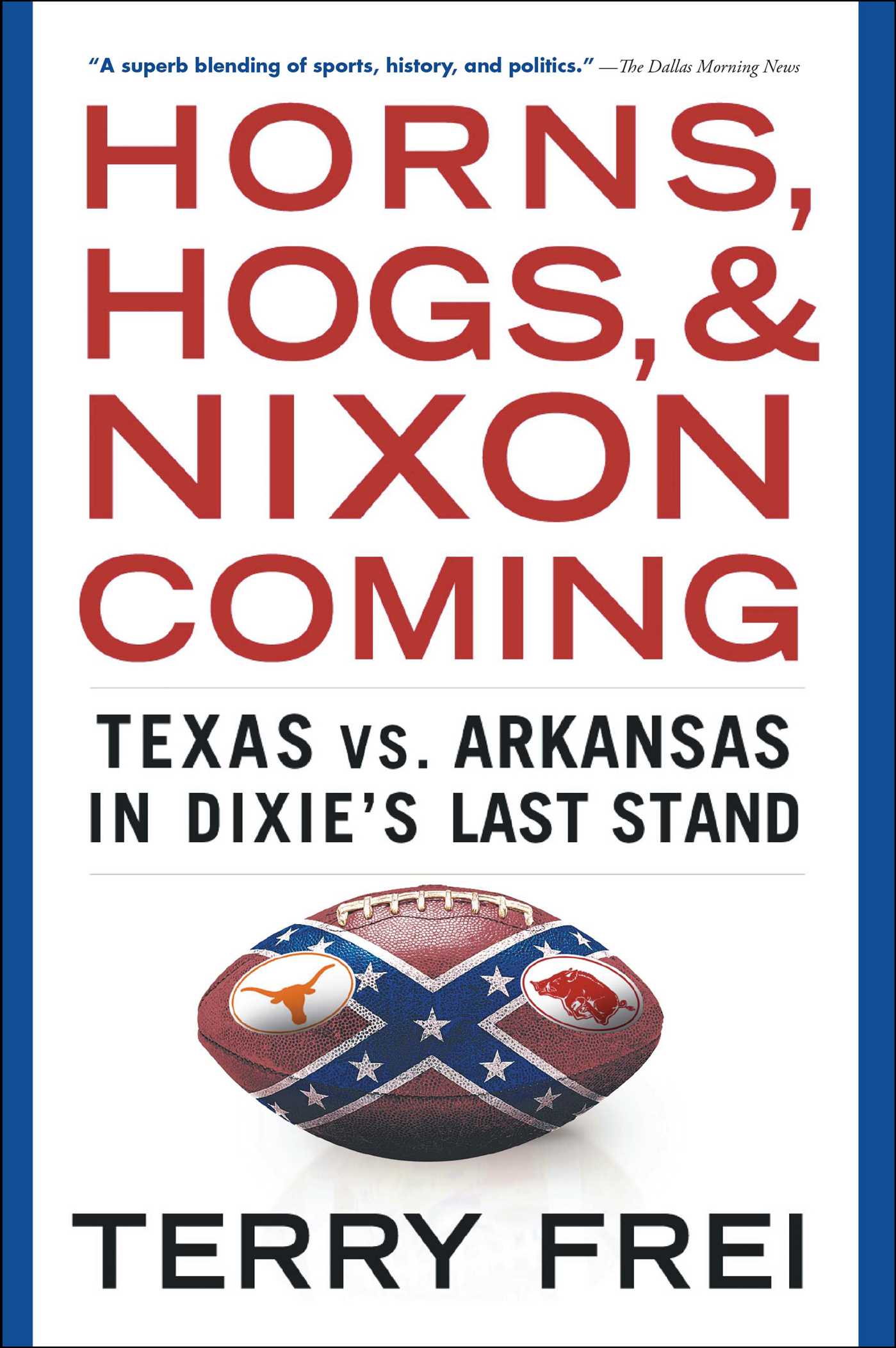 By Terry Frei
LIST PRICE $16.99
PRICE MAY VARY BY RETAILER

On December 6, 1969, the Texas Longhorns and Arkansas Razorbacks met in what many consider the Game of the Century. In the centennial season of college football, both teams were undefeated; both featured devastating and innovative offenses; both boasted cerebral, stingy defenses; and both were coached by superior tacticians and stirring motivators, Texas's Darrell Royal and Arkansas's Frank Broyles. On that day in Fayetteville, the poll-leading Horns and second-ranked Hogs battled for the Southwest Conference title -- and President Nixon was coming to present his own national championship plaque to the winners.
Even if it had been just a game, it would still have been memorable today. The bitter rivals played a game for the ages before a frenzied, hog-callin' crowd that included not only an enthralled President Nixon -- a noted football fan -- but also Texas congressman George Bush. And the game turned, improbably, on an outrageously daring fourth-down pass.
But it wasn't just a game, because nothing was so simple in December 1969. In Horns, Hogs, & Nixon Coming, Terry Frei deftly weaves the social, political, and athletic trends together for an unforgettable look at one of the landmark college sporting events of all time.
The week leading up to the showdown saw black student groups at Arkansas, still marginalized and targets of virulent abuse, protesting and seeking to end the use of the song "Dixie" to celebrate Razorback touchdowns; students were determined to rush the field during the game if the band struck up the tune. As the United States remained mired in the Vietnam War, sign-wielding demonstrators (including war veterans) took up their positions outside the stadium -- in full view of the president. That same week, Rhodes Scholar Bill Clinton penned a letter to the head of the ROTC program at the University of Arkansas, thanking the colonel for shielding him from induction into the military earlier in the year.
Finally, this game was the last major sporting event that featured two exclusively white teams. Slowly, inevitably, integration would come to the end zones and hash marks of the South, and though no one knew it at the time, the Texas vs. Arkansas clash truly was Dixie's Last Stand.
Drawing from comprehensive research and interviews with coaches, players, protesters, professors, and politicians, Frei stitches together an intimate, electric narrative about two great teams -- including one player who, it would become clear only later, was displaying monumental courage just to make it onto the field -- facing off in the waning days of the era they defined. Gripping, nimble, and clear-eyed, Horns, Hogs, & Nixon Coming is the final word on the last of how it was.

"A superb blending of sports, history, and politics."

"A delightful, well-researched chronicle of a turbulent era."

"Frei does a masterful job of weaving in the historical significance of the turbulent times, including Vietnam protests, the military draft lottery and the civil rights movement that were so much a part of campus life in that era. It's political football at its best."

"Everyone knows that football today is a far cry from what it was in the days of leather helmets and dropkicks, but it takes a book like Terry Frei's Horns, Hogs, and Nixon Coming to show how much the game has changed in just the last three decades."

"The great sports books eventually aren't about the game or the scoreboard result, but about the characters involved -- on the field, in the stands, outside the stadium, around the country.... Frei's account of an important moment of Arkansas and Texas sports history is great because of that and can mean something to the average readers off in Oregon or Connecticut."

"Frei possesses the football expertise, an uncanny ability to buttonhook diverse personal anecdotes together, and the appreciation for history to best tell this remarkable tale."

"A great story, well-told, with more delicious details than a linebacker could handle."

By Terry Frei
LIST PRICE $16.99
PRICE MAY VARY BY RETAILER