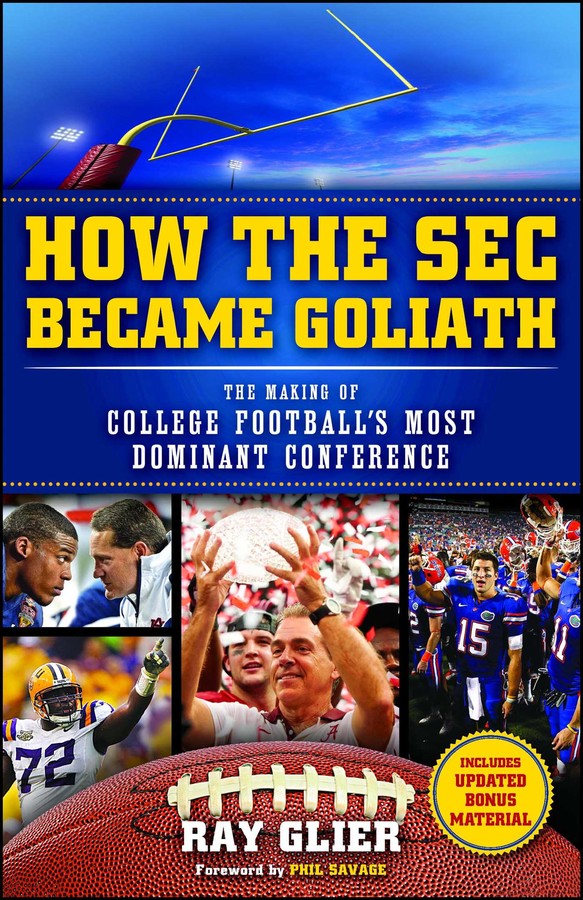 How the SEC Became Goliath

The Making of College Football's Most Dominant Conference

By Ray Glier
LIST PRICE $18.99
PRICE MAY VARY BY RETAILER

How the SEC Became Goliath covers the Southeastern Conference and how the league became dominant in college football, winning six straight national championships. Size matters. That’s why the SEC is Goliath, because the Southeastern Conference, top to bottom, has better coaches, better stadiums, better bank accounts, and better weather, but the real difference maker is the bigger and better players.

For six straight years the SEC has walked off with the big crystal prize and will not give it back. The talk of “big boy football” grinds on the Buckeyes, Sooners, Longhorns, and Ducks. All they can come back with is “Wait until next year.” Then next year comes and the SEC tribe is chanting in the closing minutes of the National Championship Game, “SEC, SEC, SEC!”

The national championship trophy has been in the South for so long it has sunburn. That is why college football is thick with the acrimony: SEC vs. Everyone Else. The dominance of the SEC has a lot more to do with the South’s culture than just the rock-’em, sock-’em of football played one day a week. The South lost the Civil War, and sociologists will tell you that there is still a regional angst, an “us against them” mentality, a spirit of “those damn Yankees.” It is not just about championships. The SEC is about culture and competitiveness. . . . It is about players.

How the SEC Became Goliath provides an inside look at college football’s most dominant conference. Four different schools in the SEC have won the last six championship titles: 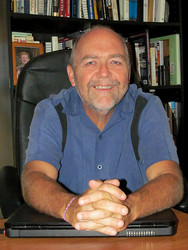 Ray Glier is a freelance journalist in Atlanta. He contributes to USA TODAY, The New York Times, and The Miami Herald, among other publications. He has covered the Southeastern Conference since 1986 and is the former executive sports editor of The Knoxville Journal.

“Ray Glier does a fantastic job of capturing the evolution and rise of the Southeastern Conference and gives his readers an up-close look at how the league and its teams came to dominate college football. From Alabama to Florida to LSU and everywhere in between, Glier gives readers an intimate look at college football in the South, where the sport always seems to matter more than anywhere else.”

“Read the book, bathe in the anecdotes, and soak up the knowledge. If you love the SEC — heck, even if you hate it — let Ray Glier take you on a ride through the most popular, powerful entity this side of the NFL. From Roll Tide to Hotty Toddy and all championship points between, a must read for college football fans.”

“Ray Glier has researched deeply and gotten behind the scenes to chronicle how the nation's best conference
got that way.”

“SEC football might be the most unique ecosystem in sports. In his fine book, Glier carefully examines the food chain and explains exactly how the eat-or-be-eaten world of SEC football works.”

“At a time when the SEC is flexing its muscles and racking up national championships in college football, Ray Glier expertly explains why the SEC and its football coaches have tormented the rest of college football. Whether you're a fan of new SEC member Texas A&M or a longtime follower of the Crimson Tide, you'll be fascinated by How the SEC Became Goliath: The Making of College Football's Most Dominant Conference.”

“As a former player in the Big East, I can tell you that conference envy is very real. You won't hear anyone saying they wish they had the exposure of Mountain West, or a chance to play in front of “those legendary Big Sky fans.” The SEC is College Football and How the SEC Became Goliath diagnosis and explains the lineage, pedigree, and insanity of it all.”

“There hasn't been a bigger story in college football the last six seasons that the thunderous success of the Southeastern Conference. And there isn't anybody better equipped to explain why the SEC has delivered that Ray Glier. He not only knows the league and all its important personalities, he's enabled everybody else to know them, too, by writing this wonderful book.”

“Ray Has his Finger on the Pulse Of SEC Football. (The) Best Book about the Conference I have read in My 30+ Years of Covering College and NFL Football.”

“The SEC has become the most dominant force in college football -- maybe in all of sports. Ray Glier does a masterful job of explaining how and why that happened. If you love Southern football -- or if you're still on the outside, wondering how such a 365-day-a-year passion can be generated and sustained -- this is your book.”

“The SEC is at the top of the food chain in college football today, but it wasn't always that way. Glier does a great job going in depth about the circumstances, planning, and luck that all played a role in making the SEC the best conference in college football.”

“Anyone who wants a picture into how the SEC became Goliath of college football need only read Ray Glier's book. He is pretty thorough in covering the reasons for the SEC's success. But probably his most important point is the passion for the sport in the south, even at the little league level. Says Glier, “The ferociousness with which they approach the game in the south -on the field and off the field - separates this section of the country from the rest.” “Goliath” is a consummate yet easy to read expose, highly recommended.”

“Ray Glier vividly shows why SEC is the most dominant conference in college football. There is no secret formula for success in SEC, and Glier reveals the inner workings of the most successful programs in the nation.”

If the SEC’s dominance of late baffles you, Glier paints a clear and revealing picture of how the conference vaulted to the top.”

“The rise to national dominance in college football by the SEC has been nothing short of extraordinary. Ray Glier's inside look at the transition from a conference on the brink of greatness all the way to the top of the mountain is a must read for any fan of college football.”

“Love or hate the SEC’s dominance, Ray Glier's entertaining breakdown of the conference’s rise to the top of the college football landscape will have you hooked. Detailing the roles of Nick Saban, Les Miles, Urban Meyer and more, Glier weaves a tale of the money, pride and tradition that made the SEC what it is today.”

“'How The SEC Became Goliath' is a remarkable exploration of the factors that have led to the conference's dominance. Glier deftly weaves cultural, economic and historical data together with profiles of key figures to produce a compelling read.”

“The SEC is the most powerful conference in all of sports but wasn't always so universally feared and loathed. Ray chronicles in extraordinary detail in the evolution of a semi-power to a superpower in college football. Absolutely mesmerizing. Must-read is an understatement.”

“Leave it to Ray Glier to do what nobody else has been able to do -- tackle the SEC. Using irrefutable facts, insightful anecdotes and expert analysis, he brings down all the myth and mystery surround the best conference in college football. I thought I knew the SEC until Ray Glier schooled me, and I enjoyed every word of it.”

“From the weight room to the recruiting trail and straight onto the field, nobody has dominated the sport of college football in recent years like the Southeastern Conference, and never before has anyone captured the essence of what makes the SEC so special like Ray Glier has in his new book “HOW THE SEC BECAME GOLIATH: The Making of College Football's Most Dominant Conference.” This book is a must-have for anyone who loves this sport, and who has ever wondered how the SEC became the king of the college football world.”

“Every fan, coach and player outside the Southeast ought to grab a copy of this book to figure out just how the SEC keeps beating them, year after year. Not that it would matter; by the time they understood how they'd lost before, the SEC would be dominating them in new and different ways. And for SEC fans? Why, this book is like a family album and a Christmas wish list all in one.”

“Mr. Glier provides fascinating insight into the Southeastern Conference's unprecedented college football dominance through firsthand accounts, and examines its many champions through all facets: on the recruiting trail, in the locker room and in the huddle. He demonstrates how gridiron success goes beyond the stadiums of the South and into its very culture.”

“With former Florida coach Urban Meyer now directing matters at Ohio State, all members of Buckeye Nation and the Big Ten would be wise to pick up any and all information from the football conference that rules. Before you can beat them, you better understand them.”

“While the rest of college football struggles with confusing conference jumping and the loss of traditional rivalries, the SEC continues to stand out as a symbol of relative stability and competitive dominance. That's not a coincidence. Ray Glier highlights the people and events that have turned the SEC into football's only true super conference.”

“Ray Glier’s, How the SEC Became Goliath, is not a love-letter to a conference used to stomping on hearts and shattering national dreams of a level playing field. And that’s exactly what makes it refreshing, like a cool drink from a red solo cup on a warm Saturday afternoon. It’s more of a re-examining of the SEC’s brash and ruthless culture, a region’s love affair with football, and why the conference doesn’t buy talent, it simply recognizes it better than anyone else, before grooming it within very complex and well thought out systems. At 241 pages, Goliath, may look long, but it’s an easy read, backed smartly with anecdotes, history, and quality research. While it jumps around quite a bit, it reaffirms its message throughout: The SEC is bigger and faster than everyone else and at the end of the day, that’s the bottom line for why it can’t be stopped.”

“Glier gives his readers a glimpse into the makings of the mad geniuses that have ruled the BCS Championship Game for the better part of a decade. This is no mere recitation of stats; instead it examines the human interest stories of those dedicated to the kind of perfection in the Southeastern Conference, from the players to the coaches and everyone in between that builds dynasties.”

How the SEC Became Goliath

The Making of College Football's Most Dominant Conference

By Ray Glier
LIST PRICE $18.99
PRICE MAY VARY BY RETAILER