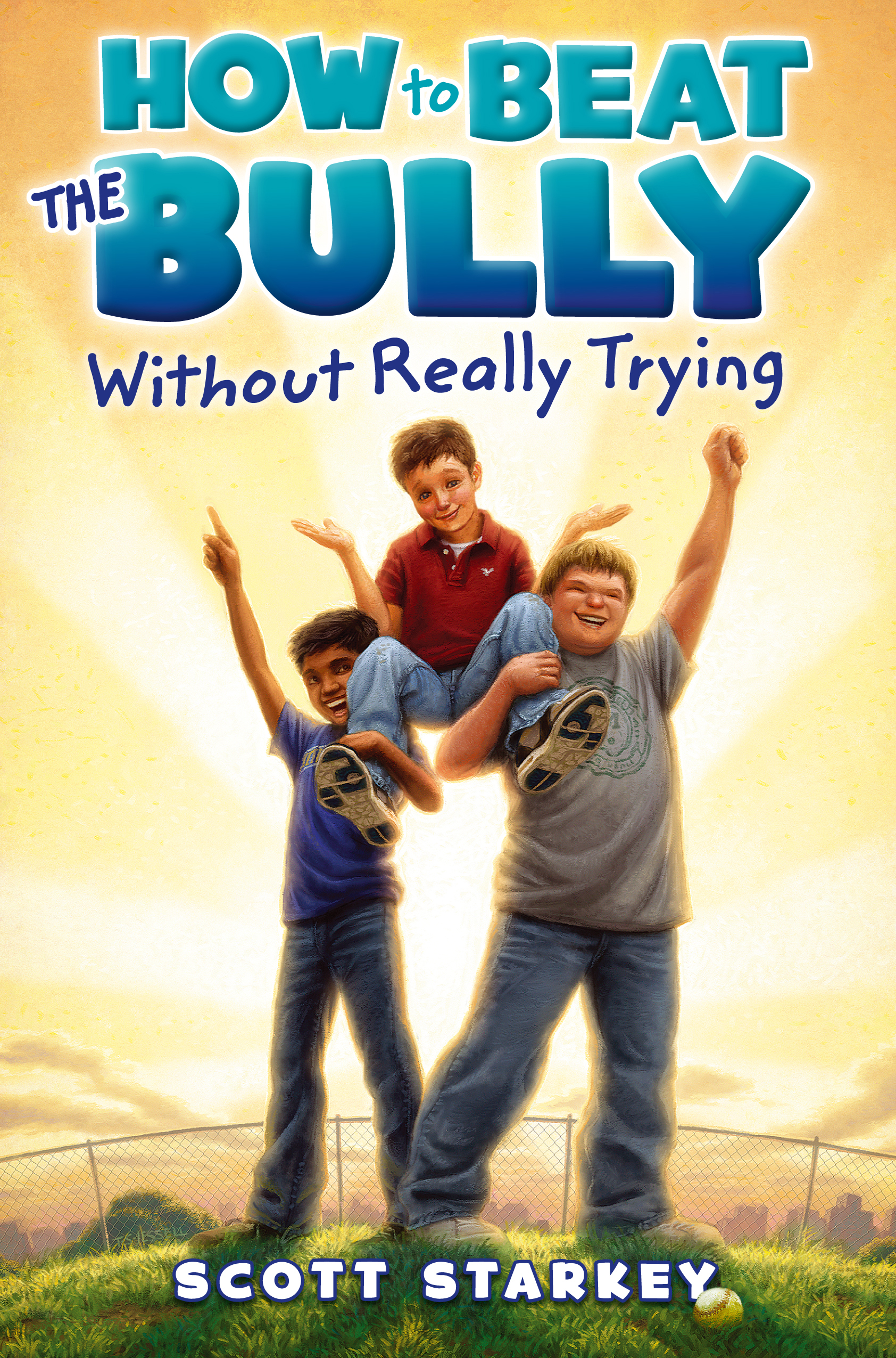 How to Beat the Bully Without Really Trying

When luck gives a new kid a false reputation as a tough guy, can he find the strength to live up to his image?

Rodney Rathbone is a self-admitted coward. Things scare him, and he can’t help it. So naturally he’s terrified when he moves to a new town and the bully is ready to pounce. But just as Rodney is about to flee, a baseball flies in from out of nowhere and knocks out the bully. Now everyone thinks Rodney’s invincible—when really he feels just the opposite. Can he figure out how to live up to his new reputation and make friends along the way?
Told with warmth and heart, this debut novel from a middle-school teacher will speak to the hidden insecurities—and strengths—of every middle-grade reader.

“What’s the third choice?” I asked.

Ah, the first day of school! New notebooks, a new backpack, meeting new people, getting beat up by a bully. Actually, Josh wasn’t just any bully. He was THE bully at Baber Intermediate. Looking back on it now, I can’t believe I made it through that first day. Heck, I can’t believe I survived all the way to graduation. It’s a pretty amazing story to tell. Adults will probably say I’m exaggerating, but I don’t blame them. Even I have a hard time believing what happened to me this year!

I remember exactly how I felt that first morning before school. My father was sitting to my left at the breakfast table. He was in the middle of buttering some toast when he turned to me and asked, “Rodney, what could be better than being a new kid in a new school in a new state? This must be your lucky day!” It’s hard to imagine, but he really believed the nonsense that came out of his mouth. He sat there at the breakfast table grinning from ear to ear. “Can’t you just feel the excitement?”

All I could feel was my stomach twisting into a tight knot. Today was going to be the worst day ever—and I didn’t even know yet about Josh, the lunchtime fight, the broken nose, and everything else waiting for me at school.

Panic flashed across my dad’s face. “I can’t be late for work.” He jumped up and was out the door like a shot.

My mom watched him leave and shook her head slightly. “He’ll never get over the shoe incident.” Listening, I remembered how he’d been smiling when he told me we were moving to Ohio. I also remembered how the smile had faded when I’d thrown up on his foot.

“Sure, just like in New York,” she answered, never missing an opportunity to torture her older brother.

I looked down at my bowl of Cheerios, remembering some of the bullies I had left behind. But as bad as they were, the idea of being the new kid scared me even more. You see, I knew what my parents didn’t—that I’m a coward. Not just your average wimp, afraid of the occasional creepy movie or dark basement steps, but the real deal, a big-time chicken. I’d rather run than fight anytime. Penny was the only one in my family who guessed the truth about me.

My mom handed me my lunch and I headed out the door for the bus stop. As I approached the end of our street, I realized I didn’t know any safe hiding spots. In my old school I knew where to hide when a bully came looking for me. Luckily, there were no menacing thugs about—just one kid at the bus stop leaning against a big maple tree and fidgeting with something in his hands. He wasn’t much taller than me, which isn’t saying much. He had black hair and a warm face that broke into a grin when he saw me approach.

“I’m Rodney.” This was going well.

“Rodney? They’re going to kill you with a name like that.”

I felt my stomach tighten. “What’s your name?” I asked.

For a moment I just stared at him, not knowing what to say. “Rishi?” I repeated.

“Where you from?” he asked.

“New York. Wow . . . do you ride the subway every day? How many times have you been mugged?”

He’d seen too many movies. Nothing dangerous ever happened in my old neighborhood, which was in the outskirts of New York City in Queens. I tried to think of something to say.

“Mrs. Lutz-something,” I started to say, wondering if this Rishi kid ever stopped blabbering.

“Wow, me too. Hey look, there’s the bus. Stick with me. I’ll show you around the place. Smile.” Click!

“No worries, I take pictures of everything.” Rishi kept right on talking as we climbed aboard the bus. He pointed to a seat in the middle and sat down next to me. He never shut up, but he was nice. I relaxed a little. I had already made a friend. Maybe things wouldn’t be so bad. It was then that I noticed he had shut up. “Keep your head down,” he whispered.

“Shhhhh. This is Josh’s bus stop.”

The rest of the bus had gone silent. “Who’s Josh?”

Rishi looked at me like I was crazy. “Only the nastiest bully in Baber Intermediate history. He was beating up kids our size back in nursery school. Keep your head down. Don’t look him in the eye and maybe you’ll be all right. See you later.”

“What? Where are you going?”

“Oh, he hates new kids. Good luck.” With that, he ducked a few seats away, leaving me in terror. Oh no no no-o-o-o-o, my brain seemed to scream. I noticed the girl across the aisle hiding behind her backpack, and I considered climbing under the seat. The doors opened and loud footsteps thudded up the stairs. In the end I just closed my eyes and tried to imagine something happy. The only thing that came to mind was my sister’s favorite TV show growing up. I sat there quietly humming, “I love you, you love me, we’re a happy family,” and waited for the end to come.

The steps got closer and a bead of sweat ran down my spine. After what seemed a very long time, the bus started. I couldn’t believe it. He had left me alone! That wasn’t so bad. I exhaled and started to open my . . .

My head jerked forward and stung in the back. I looked up to see a kid staring down at me. He looked six feet tall and had a neck the size of my waist. “You a new kid?” he growled.

For a second I considered jumping out the emergency hatch, but then managed to squeak, “Me? No, I’m not new. Been here for years.”

“You’d better not be. I’ll be seeing you real soon.”

“Oh, okay, look forward to it,” I said. He grunted and gave my head another smack before strutting down the aisle to the back of the bus. I exhaled. Yeah, Mom. They’re all going to love me.

Eventually the bus pulled up in front of Baber Intermediate. It was a pretty typical-looking school, not old but not brand-new. All I kept thinking was how much space there was out here in the Midwest. Fields and fields everywhere. Back in New York we all lived on top of each other.

I went through the main entrance and was heading down a crowded corridor, careful to avoid Josh, when Rishi appeared at my elbow. “You’re still alive?” he observed.

“You probably don’t know where Mrs. Lutzkraut’s class is. Come with me.” We climbed a set of stairs, went down another long hall, and came to a stop outside room 217. “Now look, Mrs. Lutzkraut is mean,” Rishi explained.

“Some of my good buddies are in this class, though. Real good guys. Let’s go meet them.”

It sounded like an excellent idea. I felt a little relief, especially since Josh was nowhere in sight. Time to finally meet some nice kids. I walked up to the first boy in line and said, “Hi, I’m Rodney.”

He looked at me through narrow eyes. “Rodneeeeey. Nice name. So, you new here?”

“That’s just great, ’cause me and my buddy Josh love getting to know the new kids.” He cracked his knuckles and turned away from me. That wasn’t good.

Realizing I’d just totally blown it, I crept back to Rishi. “I thought you said your buddies were nice?”

“My buddies are nice. He’s not my buddy. That was Toby. You should have stayed far away from him.”

“Who is talking in this hall?” snapped a sharp grown-up voice. Rishi bowed his head and slid into line. I looked up to see who had yelled.

It was an awful sight, so bad I almost didn’t hear her shout, “I will not have such behavior in my class, do you hear?” For starters, this lady looking down at me was old. Her hair was short and curly and colored some strange, unnatural orange. Her glasses were big and thick, making her eyes seem bigger, and I knew that the person looking through them didn’t mess around. Mrs. Lutzkraut may have been old, but she was no little old lady. She was built like a Chicago Bears middle linebacker. I instantly got the impression she wanted to drag me down the hall by my ear.

She glared at me for several more seconds, then walked to the front of the line, turned, and uttered two sharp, crisp words. “Class! Enter!”

I was so scared I figured I’d better apologize for talking. “Mrs. Kraut-mouth,” I blurted. The class burst out laughing.

“The name is LUTZkraut,” she screamed, “and whoever you are, you’d better learn to shut your mouth.”

“Silence!” Her voiced echoed off the walls. As we headed into class it was completely silent . . . except for Toby whispering in my ear, “You’re dead, new kid.” 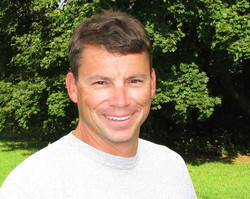 Scott Starkey is author of How to Beat the Bully Without Really Trying, The Call of the Bully, and Revenge of the Bully. A longtime elementary school teacher, Starkey is passionate about helping reluctant readers and lectures on the subject. He lives with his wife and three children in Long Island, New York. Visit him at ScottStarkeyBooks.com.

How to Beat the Bully & Call of the Bully Guide (pdf)

How to Beat the Bully Without Really Trying

More books in this series: How to Beat the Bully