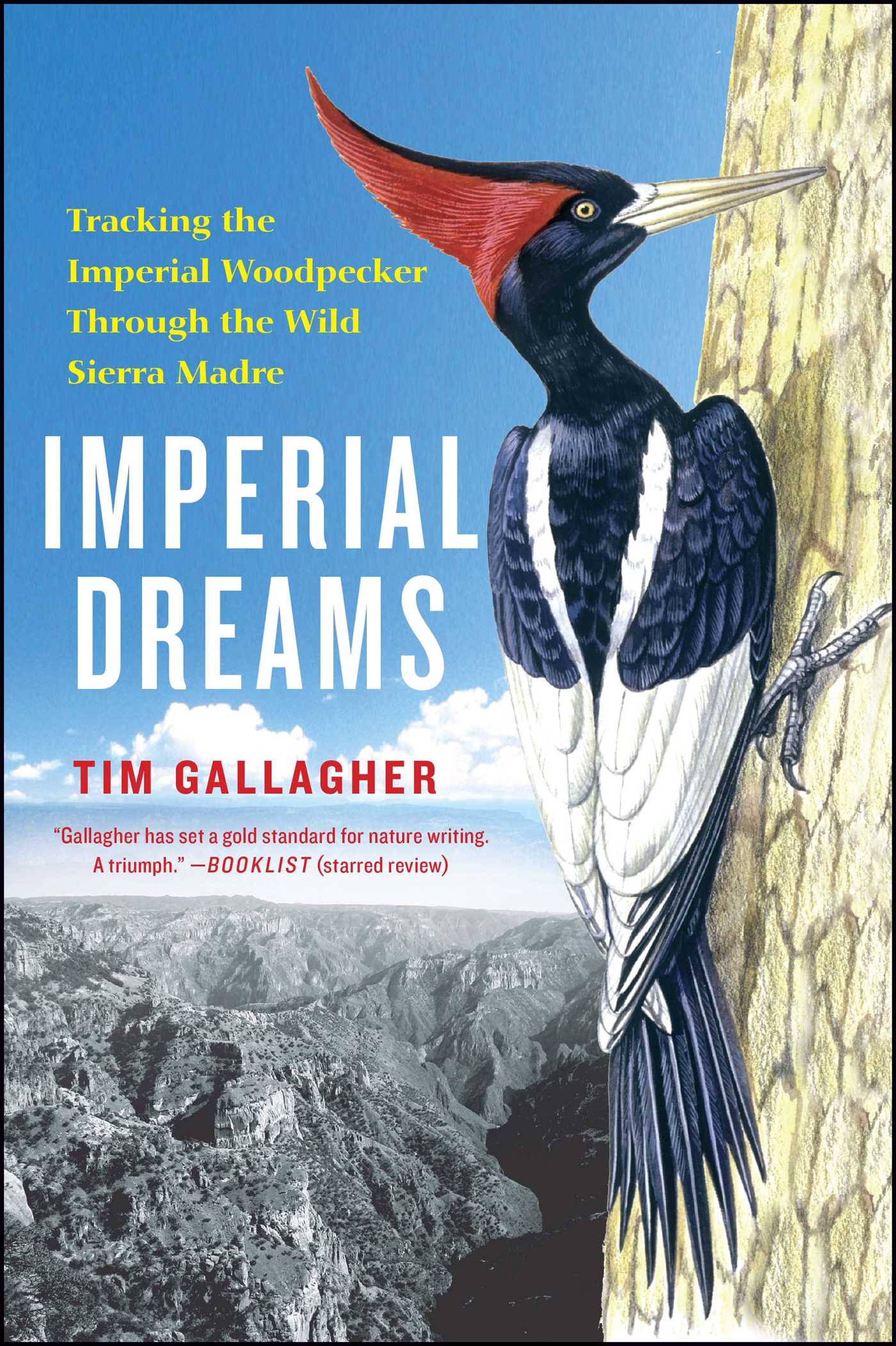 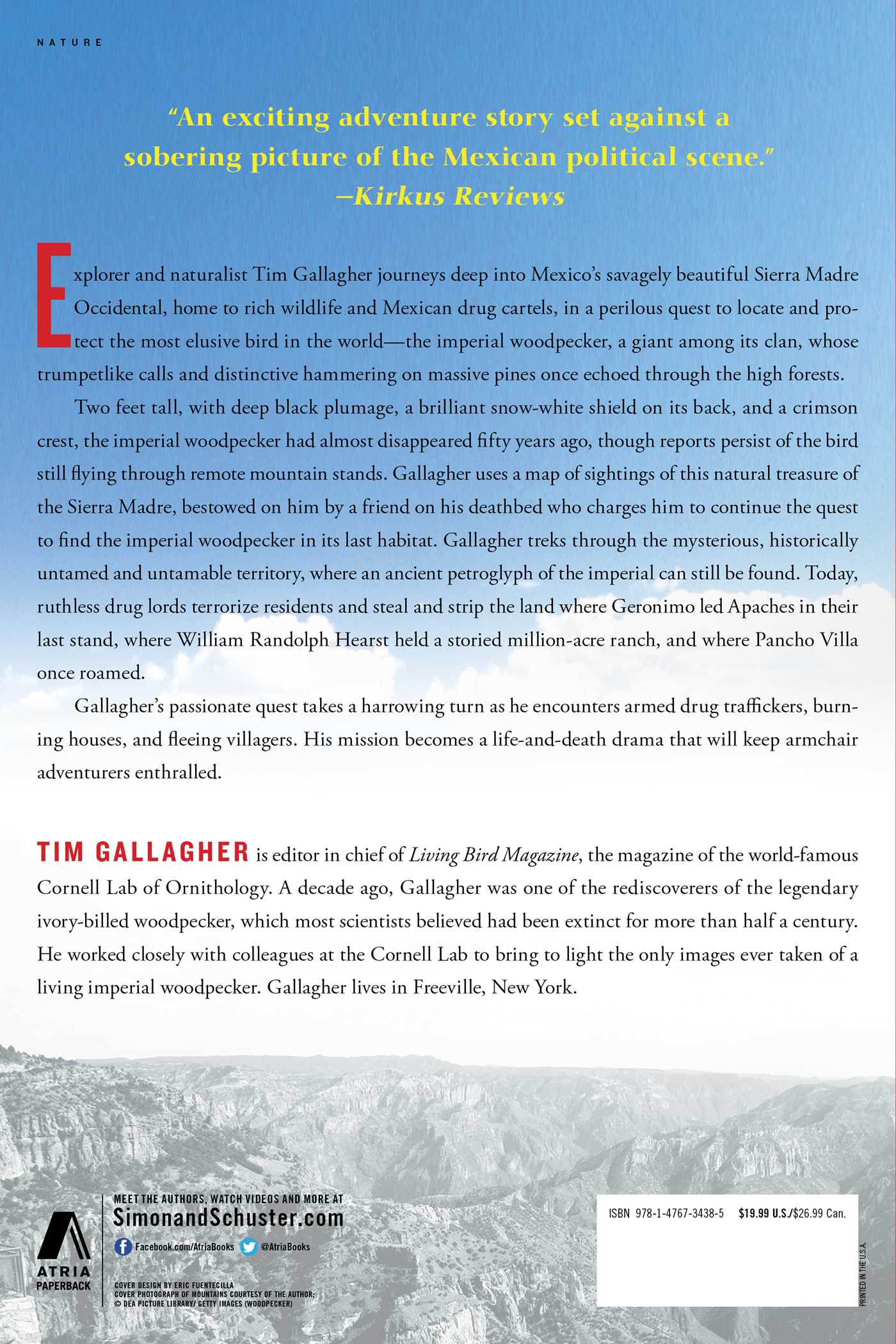 Tracking the Imperial Woodpecker Through the Wild

Explorer and naturalist Tim Gallagher is obsessed with rare birds. A decade ago, Gallagher was one of the rediscoverers of the legendary ivory-billed woodpecker, which most scientists believed had been extinct for more than half a century—an event that caused an international stir. Now, in Imperial Dreams, Gallagher once again hits the trail, journeying deep into Mexico’s savagely beautiful Sierra Madre Occidental, home to rich wildlife, as well as to Mexican drug cartels, in a perilous quest to locate the most elusive bird in the world—the imperial woodpecker, a giant among its clan.

The imperial woodpecker’s trumpetlike calls and distinctive hammering on massive pines once echoed through the high forests. Two feet tall, with deep black plumage, a brilliant snow-white shield on its back, and a crimson crest, the imperial woodpecker had largely disappeared fifty years ago, though reports persist of the bird still flying through remote mountain stands. In an attempt to find and protect the imperial woodpecker in its last habitat, Gallagher is guided by a map of sightings of this natural treasure of the Sierra Madre, bestowed on him by a friend on his deathbed. Charged with continuing the quest of a line of distinguished naturalists, including the great Aldo Leopold, Gallagher treks through this mysterious, historically untamed and untamable territory. Here, where an ancient petroglyph of the imperial can still be found, Geronimo led Apaches in their last stand, William Randolph Hearst held a storied million-acre ranch, and Pancho Villa once roamed, today ruthless drug lords terrorize residents and steal and strip the land.

Gallagher’s passionate quest takes a harrowing turn as he encounters armed drug traffickers, burning houses, and fleeing villagers. His mission becomes a life-and-death drama that will keep armchair adventurers enthralled as he chases truth in the most dangerous of habitats.

Tim Gallagher is an author, wildlife photographer, and magazine editor, currently editor-in-chief of Living Bird, the magazine of the Cornell Laboratory of Ornithology. He lives in Freeville, New York. He helped bring to light the only living images of an Imperial ever taken; when Cornell released the recently rediscovered 1950’s footage, http://www.youtube.com/watch?v=Q0OCd6b1aXU, it drew over 100,000 viewers in a few days.

A Top 10 Science & Health Book of 2013 “Gallagher has set a gold standard for nature writing. A triumph.”

“The best birding book that’s been written in years”

“An exciting adventure story set against a sobering picture of the Mexican political scene.”

“The most delightful and fascinating magpie of a memoir, told with panache, verve, and honesty.”

"Tim Gallagher's Imperial Dreams is unique, a blend of natural and tragic human history and Indiana Jones-style adventure. Imagine venturing into the mountainous heart of Mexico's narcotraficante country armed only with pictures of a great bird that may or may not be extinct. This is Tim Gallagher's most exciting book, and may be his best."

– Stephen Bodio, author of An Eternity of Eagles


"Imperial Dreams by Tim Gallagher is a natural history of the world’s most spectacular woodpecker and a mystery... It starts as a lighthearted adventure and becomes a tragedy and a tale of terror.... one to excite adventure travelers ...an unforgettable tale of loss... Excellent adventure."

– Living Bird, magazine of the Cornell Laboratory of Ornithology

"Gallagher combines an in-depth, extensively researched historical account of the region with an equally impressive detailed account of his own experiences there."

Tracking the Imperial Woodpecker Through the Wild