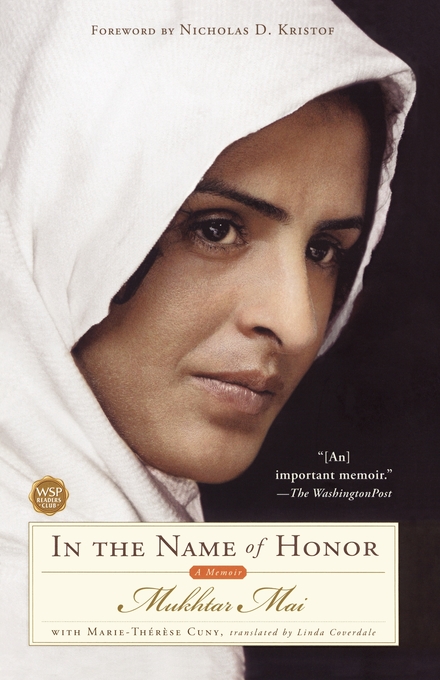 In the Name of Honor

In June 2002, Mukhtar Mai, a Pakistani woman from the impoverished village of Meerwala, was gang raped by a local clan known as the Mastoi -- punishment for indiscretions allegedly committed by the woman's brother. While certainly not the first account of a female body being negotiated for honor in a family, this time the survivor had bravely chosen to fight back. In doing so, Mai single-handedly changed the feminist movement in Pakistan, one of the world's most adverse climates for women.

By July 2002, the Pakistani government awarded her the equivalent of 8,500 U.S. dollars in compensation money and sentenced her attackers to death -- and Mukhtar Mai went on to open a school for girls so that future generations would not suffer, as she had, from illiteracy.

In this rousing account, Mai describes her experience and how she has since become an agent for change and a beacon of hope for oppressed women around the world. Timely and topical, In the Name of Honor is the remarkable and inspirational memoir of a woman who fought and triumphed against exceptional odds.

Introduction
In June of 2002, Mukhtaran Bibi, a young woman living in a small village in Pakistan was brought before her village council to plead forgiveness for a false charge against her young brother. In a shocking abuse of power, the council ordered her gang-raped by four men as retribution. Choosing not to kill herself, as many dishonored women would, she opted instead to fight back with the only weapon at her disposal - the truth. Speaking fearlessly to journalists and government officials, she was able to bring her attackers to trial and win a verdict that struck a blow against a barbaric tradition of violence towards women. Starting with money given her by the government, Bibi opened a school for both boys and girls in her native village, pouring her passion into educating those who would be otherwise powerless. She became Mukhtar Mai, "beloved older sister" to her students, and a hero to those who champion human rights throughout the world. Her struggles did not end there, however, and so here she tells her story, further empowering the women of Pakistan by continuing to spreading her truth.

Reading Guide
1) Mai describes her shifting thoughts after the rape, from numb devastation and plans for suicide into determination for justice. What were the personal and cultural factors that led to her suicidal thoughts? What pulled her out of them? In what ways did Mai's experience take away her fear of the consequences of speaking out?
2) Throughout her account, Mai speaks passionately about the power that literacy holds. Is education something we take for granted in our culture? How could Mai's story have been different if she had been literate? In what ways is knowledge power?
3) Mai writes that at the time of her initial police interviews, she knew "absolutely nothing about the official justice reserved for wealthy and educated people." (Pg. 29) Does her culture treat justice as a right or a privilege? How does this differ from the mindset in the United States? How is her assumption of justice for the privileged complicated by the story of Dr. Shazia Khalid? (Pg. 125)
4) In describing her divorce, Mai attributes her freedoms to "stubbornness, the only weapon we women have against men." (Pg. 41) How did Mai use stubbornness to her advantage? Was this a characteristic she already held, or was it also fostered by her experience? How do you think the Western feminist movement was aided by women's "stubbornness"?
5) After the verdict is read in her trial, Mai says, "I can return to my village with my head high, and modestly covered with the traditional shawl."(Pg. 73) What does this statement tell us about Muslim feminism? Is it possible to have personal pride within cultural modesty?
6) What are the varied connotations of rape in Mai's society? How is the accusation used in relation to premarital sex and unwanted marriage? In what senses do those in power view sex as a threat? How does this relate to rape's use as a means of punishment?
7) In The Name of Honor describes Mukhtar Mai's two struggles, primarily against an oppressive society, but also against the limitations she had imposed upon herself. How does her personality evolve throughout the narrative, as she changes from Mukhtaran Bibi into Mukhtar Mai? What role does Naseem play in helping Mai become a more empowered individual? 8) Mai is accused of disloyalty to Pakistan because of her outspoken efforts to change her culture, yet she speaks passionately about her love for her home. Do you think Mai's advocacy proves or undermines her patriotism?
9) Mai comments that in her work with both girls and boys at her school, she has come to see that both genders are caught in the net of her society's attitudes towards women. In which ways are men enslaved by their culture? How does the school help to free them as well?
10) Pakistani activist Hina Jilani says in relations to Mai's story that "if the condition of women is improving a little, that doesn't have anything to do with the authorities. Any progress is due in large measure to civil society and to organizations supporting women's rights." (Pg. 140) What is your opinion of personal advocacy and activism? Has Mai's story changed your viewpoint or reinforced it?

Reading Group Tips * Find out more about the struggle for women's rights in Pakistan from an organization like Human Rights Watch. For information on how to help, visit http://hrw.org/campaigns/pakistan/index.htm, or the Human Rights Commission of Pakistan's website: http://www.hrcp.cjb.net
* For up to date information, as well as links to interviews and press coverage about Mukhtar Mai, visit http://en.wikipedia.org/wiki/Mukhtaran_Bibi
* Violence against women is a global issue. To find out more visit www.4woman.gov/violence.
* Mukhtar Mai becomes an agent of change in her community through promoting reading and education. To find out what you can do in your community and about literacy visit www.nifl.gov, www.theliteracysite.com, www.proliteracy.org, www.famlit.org, and www.rif.org.
Mukhtar Mai

Mukhtar Mai is now a leading example for women in her native country and around the globe. With her compensation money she has opened two schools in her village, one for girls and another for boys. In August 2005, she was awarded the Fatima Jinnah gold medal for bravery and courage by the Pakistani government and was named Woman of the Year by Glamour magazine. In 2006, Time magazine listed her in their issue on the 100 most influential people in the world, and she was also awarded the North-South Prize of the Council of Europe.

"Only a few leaders are alchemists who take the worst of human behavior and turn it into the best. Mukhtaran Bibi, a Pakistani woman raised in poverty and illiteracy, has responded to the violence and gender apartheid directed at her and other women with an insistence on justice and education."

In the Name of Honor