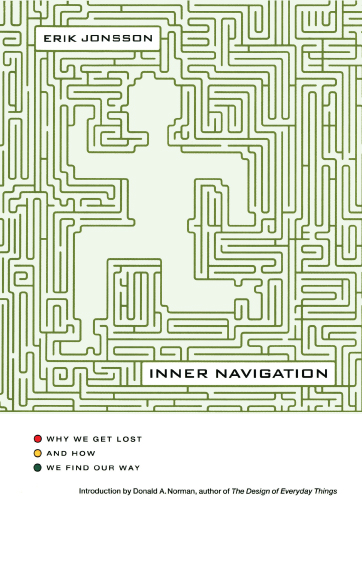 Why We Get Lost and How We Find Our Way

A FASCINATING INVESTIGATION OF HOW WE NAVIGATE THE PHYSICAL WORLD, INNER NAVIGATION IS A LIVELY, ENGAGING ACCOUNT OF SUBCONSCIOUS MAPMAKING.

Why are we so often disoriented when we come up from the subway?

Do we really walk in circles when we lose our bearings in the wilderness?

In this surprising, stimulating book, Erik Jonsson, a Swedish-born engineer who has spent a lifetime exploring navigation over every terrain, from the crowded cities of Europe to the emptiness of the desert, gives readers extraordinary new insights into the human way-finding system.

Written for the nonscientist, Inner Navigation explains the astonishing array of physical and psychological cues the brain uses to situate us in space and build its "cognitive maps" -- the subconscious maps it employs to organize landmarks. Humans, Jonsson explains, also possess an intuitive direction frame -- an internal compass -- that keeps these maps oriented (when it functions properly) and a dead-reckoning system that constantly updates our location on the map as we move through the world. Even the most cynical city-dweller will be amazed to learn how much of this innate sense we use every day as we travel across town or around the world.

Both a scientific and a human story, Inner Navigation contains a rich assortment of real-life insights and examples of the navigational challenges we all face, no matter where or how we live. It's a book that is as provocative to ponder as it is delightful to lose yourself in. Don't worry: Erik Jonsson will help you find your bearings.

I will start by explaining what happened to me in 1948 when I got "turned around" in Cologne. It was quite a long time ago, but the memory is still very vivid.

I arrived in Cologne early in the morning while it was still dark after a sleepless night in an overcrowded train from Ostend, Belgium, and slept for a couple of hours on a bench in the Central Station. After daybreak I set out towards the Rhine to find a steamer for a cruise on the river. I knew I was near the river and was puzzled when it never came in sight. Finally I asked for directions and was told to turn around. There was the river, and the steamers were in plain sight. I had been walking in the wrong direction, east instead of west, as I thought. Then I saw the sun coming out of the mist above the steamers. Sunrise in the west!

Well, that explained it. I must have become disoriented when I arrived by train during the night, so instead of going east I had actually been walking west, away from the river.

Now that I knew what had happened, everything would be all right, I thought. Not so! However much I told myself that the sun had to be in the east in the morning, I still felt that it was in the west and when I came to the Rhine I "saw" it flowing south. There was no way my reasoning could change my inner conviction. Apparently some mysterious direction system operating below the level of awareness had decided for me once and for all that in Cologne north was in the south. No appeal was possible.

This unresolvable conflict between the erroneous gut feeling and my rational knowledge was most unpleasant, and the harder I tried to resolve it, the more I suffered. I worried how long it would last: would all of Germany be turned around?

But once the boat got under way and out of Cologne, things straightened out. It was a relief to see the sun in the east again and the river flowing north. Apparently I had not gone crazy after all.

I returned in the evening when the sun was setting in the west and saw the tall spires of the Cologne cathedral in the north as we were going downstream towards it. As we approached the moorings, the area I knew from my morning walk came into view and then the most extraordinary thing happened. In an instant the universe spun around 180°. A very strange and most unpleasant experience. Afterwards the boat was going south, the Rhine flowed in the wrong direction, and the sunset was in the east. I left Cologne on the next train!

There is a rule among researchers engaged in experiments that "one time is no time," meaning that if something happens only once it does not prove anything; it must be repeated to gain credibility. I will therefore describe what happened to me in 1954 when I got "turned around" in Paris.

I arrived at the Gare du Nord railroad station in the morning after a long, tiring train journey from Sweden and took the métro (subway) to the Château d'Eau area, where I found a room in a hotel. As I looked out of my window I saw the old city gate called Porte Saint-Martin in what I felt was the north despite the fact that the map showed it was in the south. My sense of direction must have become confused during the underground ride, so that when I emerged into the street at the Château d'Eau station, my "automatic pilot" jumped to the wrong conclusion and made me feel that north was south. I stayed at the hotel for a week and made several attempts to straighten things out by approaching the hotel on foot from different directions, but as soon as I entered the area around the hotel I invariably had to go through the nasty 180º turn of the universe. A most humiliating experience for a Swedish forest hiker, who prided himself on his good sense of direction.

Finally I gave up and resigned myself to the fact that for me there was an "island" in Paris around the Château d'Eau métro station where my "inner compass" was turned around so that north was south and east was west. In order to avoid the rather upsetting sudden turnaround I experienced when I entered the area by street, I had to take the métro there. However, when I left the area on foot, I did not notice any sudden turnaround. It seemed more like passing through a zone of uncertainty that ended when I noticed familiar landmarks farther away.

Now my own experiences count for very little, since my honesty is not generally known, except to my acquaintances. I will therefore call a witness, Harold Gatty, who tells in his book Nature Is Your Guide how he got turned around at the Roosevelt airfield near New York.

It was my first flight to Long Island; and after a long and trying nineteen hours flying, we landed at Roosevelt Field in very bad weather. It was in the middle of the night. I was overtired, and when I oriented myself on leaving the airfield I established the wrong directions. I kept feeling that I knew my directions perfectly and kept finding that I was absolutely wrong. What is more, on subsequent visits I carried my capacity for illusion with me. Everything seemed reversed. I made mistakes so consistently that I began to lose all confidence in my ability to find my way.

I hope these stories have made you nod in agreement because you have also experienced these kinds of turnarounds. For I have been told many times, when talking to people about this, that something similar had happened to them. They are often a little shy about it, thinking it means that they have a bad sense of direction when in reality it means just the opposite, that they have a good one. In fact, this sort of reversal cannot happen to somebody who has a bad sense of direction, as we will see.

These three experiences point out that humans must have a "direction sense" that we are not aware of. Our minds have a directional reference frame that we rely on to orient ourselves. It is the mainstay of our spatial system. We know in which direction to go, but if we were asked how we know, we would have no answer. It is automatic. When something goes wrong so that it works against us, it becomes a terrible nuisance; when it works right, it is a tremendous asset. And it does work right most of the time -- astonishingly so. I only noticed it failing twice between the ages of twenty and forty-five. One could surmise that before maturity it would not be fully developed and after middle age it would start going downhill. Now that I am past seventy, I have to admit that my sense of direction is far worse than it used to be.

It is also noteworthy that in all three cases I have recounted there was severe fatigue involved -- not only general fatigue from lack of sleep, but also a special kind of fatigue from prolonged traveling that might have had an adverse effect on the spatial system, and could be labeled "directional input overload."

There is another neural system that operates at a level below awareness, the one that keeps us in balance as we stand and move around. It is automatic: we rely on it unthinkingly, taking it for granted, but when something goes wrong with it, we get in big trouble.

I vividly recall one particular midsummer night in Sweden in my youth when I happened to imbibe excessive amounts of alcohol. The result was spectacular. The horizon started seesawing in a marked manner, and to add injury to insult, it occasionally came up so that the ground hit me in the face. All the time I was firmly convinced that my body was perfectly vertical, it was just the horizon that misbehaved!

Alcohol changes the viscosity of the liquid in the semicircular canals of the ears, which throws into disarray the finely tuned vestibular system whose job it is to keep us upright and hold the picture of our environment stable. As a result, we feel we are upright when we are in fact reeling, and we see the horizon and our whole environment move.

Now that we have established that we possess a kind of inner compass, it is time to explore another aspect of our spatial system, the "mental map" or "cognitive map" we make of our environment. Our inner compass is useless without an inner map telling us our location and the direction where we want to go.

Why We Get Lost and How We Find Our Way