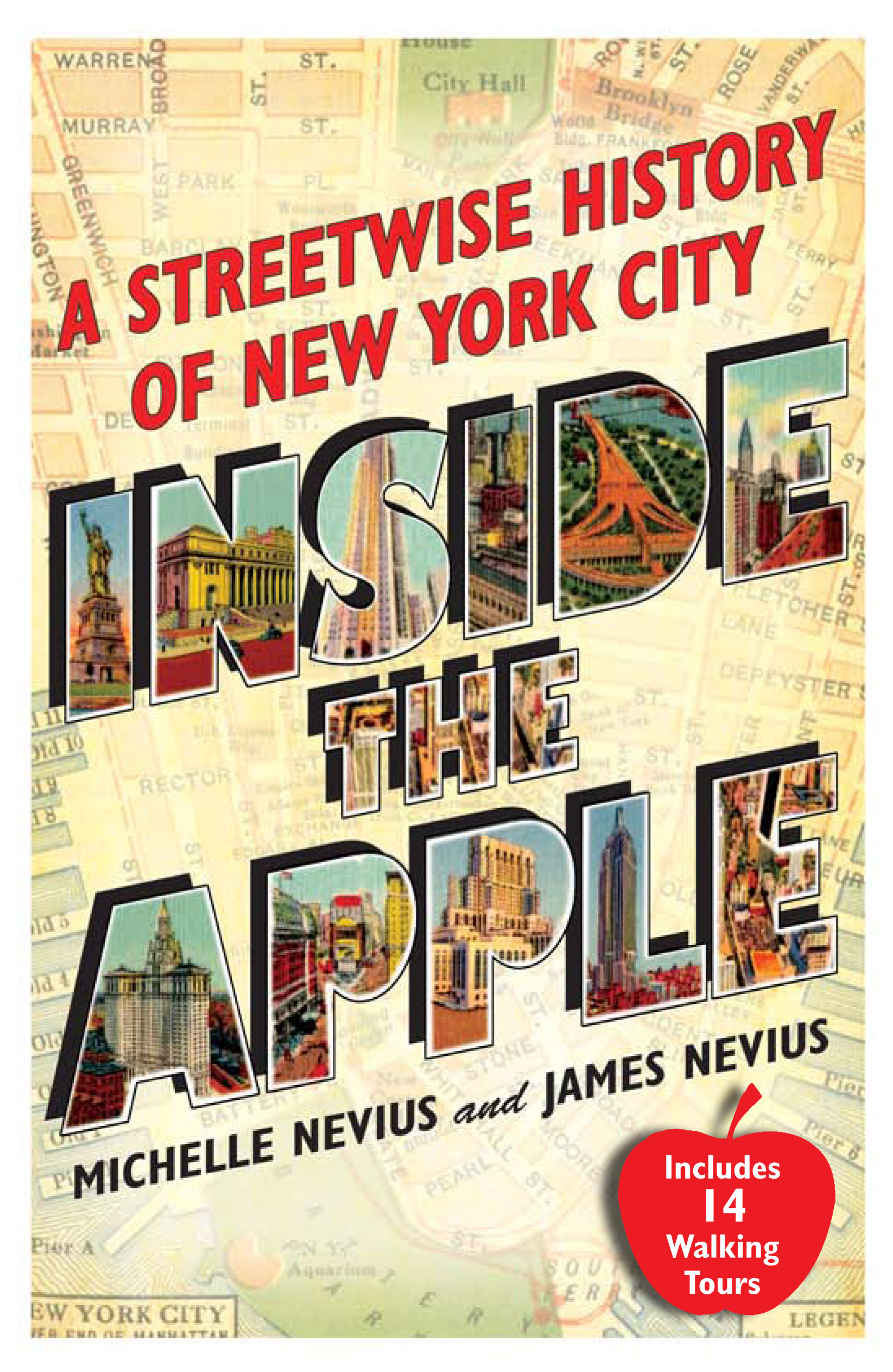 How much do you actually know about New York City? Did you know they tried to anchor Zeppelins at the top of the Empire State Building? Or that the high-rent district of Park Avenue was once so dangerous it was called “Death Avenue”? Lively and comprehensive, Inside the Apple brings to life New York's fascinating past.

This narrative history of New York City is the first to offer practical walking tour know-how. Fast-paced but thorough, its bite-size chapters each focus on an event, person, or place of historical significance. Rich in anecdotes and illustrations, it whisks readers from colonial New Amsterdam through Manhattan's past, right up to post-9/11 New York. The book also works as a historical walking-tour guide, with 14 self-guided tours, maps, and step-by-step directions. Easy to carry with you as you explore the city, Inside the Apple allows you to visit the site of every story it tells. This energetic, wide-ranging, and often humorous book covers New York's most important historical moments, but is always anchored in the city of today.

1. Manna-hata: New York Before the Europeans

Walking through Times Square, surrounded by concrete, traffic, steel, and neon, it can be difficult to conjure up what this same tract of land must have looked like in 1608—a mere 400 years ago—before the arrival of Europeans. What would we see if we could strip away the generations of urbanization and return Manhattan to its pre-contact glory?

New Yorkers often wonder about what was here before. It can be tempting to invoke an Eden-on-the-Hudson, where wild animals roamed freely through tall forests and verdant meadows. And Manhattan did have all those things—but for nearly 11,000 years before Henry Hudson [2] there were also people using the land and altering it for their own benefit.

At the end of the last Ice Age (ca. 20,000 years ago), the Wisconsin glacier began a slow retreat, revealing the deep fjord that we now call the Hudson River. Exerting tremendous pressure as it moved, the glacier also scraped away layers of sediment, leaving parts of the island of Manhattan with exposed bedrock. This bedrock, called Manhattan schist,1 is easily seen today in Central Park and Morningside Park [73], where vast pieces of rock rise from the ground dramatically. Other remnants of glaciation can also be seen at the southern end of Central Park’s Sheep Meadow [151], where a line of boulders marches from the southwest, crossing the footpath that borders the bottom of the meadow. These are glacial erratics, non-native stones that were deposited here by the ice floe.

As the glacier departed, the first Native Americans were arriving, but very little is known about these settlers. Clovis point spearheads and other stone tools found in Staten Island in the 1950s place people in the area about 11,000 years ago. Scant evidence exists of population migrations and changes over the next 10 millennia, but many archaeologists agree that Native Americans lived in and around the area continuously until the arrival of European settlers. In the 17th century, these inhabitants were part of a larger group of Algonquin speakers; they referred to themselves as Lenape (“the people”) or Munsee (their language group). Tribal names, such as Canarsie or Hackensack, are a European creation, and were likely place names or family groups.

Today, though there are still some Lenape descendants in and around the New York region, the most vivid reminder of the city’s native past can be found in words. The most common of these is, of course, Manhattan—a word that today is known around the world but which has never been adequately defined. Because of differences in dialect and the general inability of most Europeans to correctly hear and reproduce Algonquin words, we will never know for certain what it signified. One Lenape word, menatay, means “island”; another, mahatuouh, is “the place for wood gathering”; and a third, mahahachtanienk, is usually translated as “place of general inebriation.” But none of these are Manna-hata, the first words ever written down by a European to name the island.

A typical European view of a Lenape settlement

In the 19th century, Manhattan was often poetically translated as something along the lines of “island of gentle rolling hills.” However, that translation has given way to a pithier definition, “rock island.” While today the bedrock is really only visible in the parks and a few other places, 400 years ago it would have been the island’s most salient feature, making it distinct from the less rocky, more arable land surrounding it in what we would today call New Jersey and Long Island.

Thinking of Manhattan as “rock island” helps shape our understanding of how the island was used. Conventional wisdom has long held that the Lenape must have been farmers, and that corn, the great American grain, must have been their staple crop. But archaeological evidence, which is undeniably slight, suggests that agriculture did not play a large role in the local diet until after European arrivals. Instead, Manhattan would have been a place of hunting, foraging, and, most important, fishing.2

The rivers that surround Manhattan were central to life, from the wide array of fish to the oyster beds in the harbor (which have recently been estimated to have been the largest in the world). The wide river on the island’s western edge—today known as the Hudson—was called Muhheakuntuck (“the river that flows two ways”), and it took on mythic overtones for the Lenape. The legend went that they had been told in a vision to journey until they found such a river and to settle there. At its mouth, as it empties into New York Harbor, the river is a tidal estuary, so affected by the ocean that significant tidal activity reaches 150 miles upriver, all the way to Troy, New York. The river remains brackish for 60 miles, to present-day Newburgh. To casual observers, the river’s odd flow is most visible in winter, when it is dotted with ice floes; as the tide goes out, the floes move slowly downstream as one might expect. But when the tide turns, the ice changes direction and begins to float lazily back upstream.

Other rivers and streams were equally important, though the ones on Manhattan have all either been obliterated or are now underground. Maiden Lane in the Financial District was once a path along a small stream named for the young Dutch women who went there to do the wash. Even today, walking through this part of town, it is easy to imagine the banks of this little river sloping downward to the vanished streambed.

Perhaps the most famous stream is in Greenwich Village. Just south of Washington Square lies tiny Minetta Lane. Intersecting it is a one-block thoroughfare, Minetta Street, and a century ago, there was also still a Minetta Court and a Minetta Place, all of them coming together to form a strange, serpentine pattern. Those streets mark the onetime course of the Minetta brook, a small stream that still runs in the storm drains below the pavement. (Some claim that Minetta is a Lenape word, but in fact it’s an English corruption of the Dutch name for the creek, mintje kill, “tiny stream.”)

Other nearby streets, like MacDougal Alley, Washington Mews, and Stuyvesant Street, likely made up a Lenape trail that served as a canoe portage so that people heading back and forth between what we now call Brooklyn and New Jersey would not have to row around the southern tip of the island. Likewise, Chinatown’s Canal Street—though built in the early 1800s [22]—was originally part of a waterway that may have allowed natives to sail straight through the island at high tide.

But everything ancient is not gone. There are living things, too, to remind New Yorkers of their past. In Washington Square is an old elm tree sometimes erroneously called the “Hangman’s Elm” [see 35]. The tree certainly dates back to the Dutch, and may, in fact, be even older, a sentry that has watched over the area since it was a Lenape encampment known as Sapokanikan. In Inwood Hill Park, at Manhattan’s northern edge, stands the Clove—an old-growth forest of oak, hickory, and dogwood. In the early 20th century, Lenape artifacts were excavated in the park. A short walk from the Clove, there’s a plaque marking the spot where Dutch governor Peter Minuit supposedly purchased the island from the natives for $24 worth of beads [3]. While historians today tend to think the sale actually happened in the vicinity of Battery Park, it is truly moving to come to Inwood Hill Park and stand in the Clove—with not a steel-frame skyscraper or neon sign in sight—and experience, if only for a brief moment, the landscape the Lenape were selling to Minuit nearly 400 years ago.

1. Schist, a metamorphic rock, is similar to gneiss and marble and often reveals embedded minerals. Manhattan schist is usually rich in mica.

2. The Wildlife Conservation Society, under the direction of Eric W. Sanderson, is at work on the Mannahatta Project, using computer modeling to return Manhattan to its pre–1609 state and examine what flora and fauna would have been here for the Native Americans.
Michelle Nevius
James Nevius

"I was born in New York and lived there for years, but I had no idea what I was missing until I picked up Inside the Apple. It's jammed with fascinating pieces of history and great nuggets of trivia. I can't wait to walk Manhattan again with this book in hand." -- Noah D. Oppenheim, coauthor of the bestselling The Intellectual Devotional™ series

"As a longtime New Yorker, I never tire of walking the streets and uncovering something new about the world's most fascinating city, where every street has a story to tell. Inside the Apple is a gem of a book, filled with nuggets about New York's extraordinary past, from the sidewalks up. Whether you are a tourist exploring for the very first time or a seasoned walker in the city, this book is a must." -- Kenneth C. Davis, author of the bestsellers America's Hidden History and Don't Know Much About® History