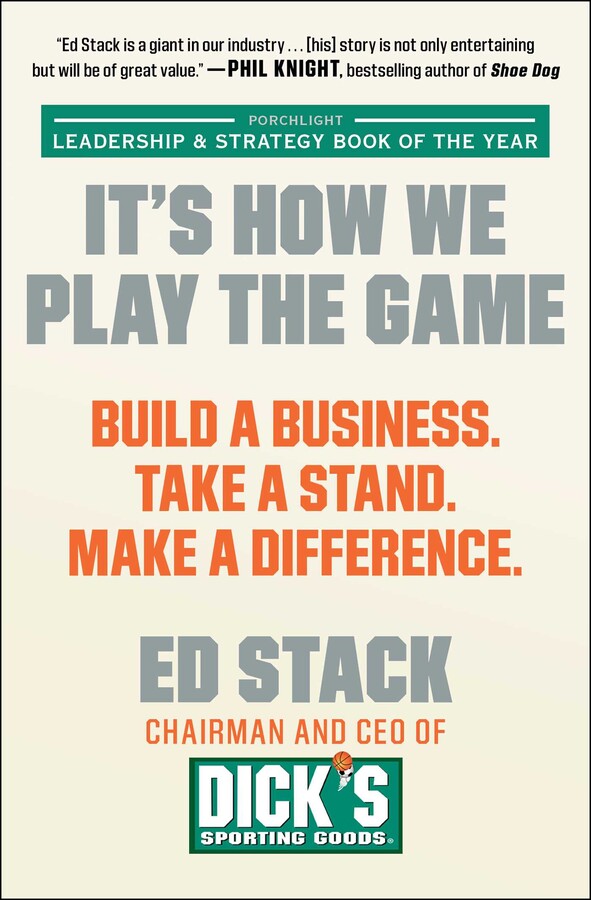 It's How We Play the Game

Build a Business. Take a Stand. Make a Difference.

By Ed Stack
LIST PRICE $12.99
PRICE MAY VARY BY RETAILER

An inspiring memoir from the CEO of DICK’s Sporting Goods that is “not only entertaining but will be of great value to any entrepreneur” (Phil Knight, New York Times bestselling author of Shoe Dog), this book shows how a trailblazing business was created by giving back to the community and by taking principled, and sometimes controversial, stands—including against the type of weapons that are too often used in mass shootings and other tragedies.

It’s How We Play the Game tells the story of a complicated founder and an ambitious son—one who transformed a business by making it about more than business, conceiving it as a force for good in the communities it serves. In 1948, Ed Stack’s father started Dick’s Bait and Tackle in Binghamton, New York. Ed Stack bought the business from his father in 1984, and grew it into the largest sporting goods retailer in the country, with 800 locations and close to $9 billion in sales. The transformation Ed wrought wasn’t easy: economic headwinds nearly toppled the chain twice. But DICK’s support for embattled youth sports programs earned the stores surprising loyalty, and the company won even more attention when, in the wake of yet another school shooting—at Marjory Stoneman Douglas High School in Parkland, Florida—it chose to become the first major retailer to pull all semi-automatic weapons from its shelves, raise the age of gun purchase to twenty-one, and, most strikingly, destroy the assault-style-type rifles then in its inventory.

With vital lessons for anyone running a business and eye-opening reflections about what a company owes the people it serves, It’s How We Play the Game is “a compelling narrative…In a genre that can frequently be staid, Mr. Stack’s corporate biography is deeply personal…[Features] surprising openness [and] interesting and humorous anecdotes” (Pittsburgh Post-Gazette). 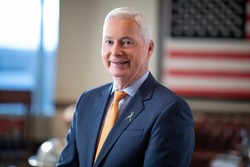 Ed Stack is the Chairman and CEO of DICK’s Sporting Goods. Born in Binghamton, New York, he now lives in Pittsburgh, Pennsylvania with his wife, Donna. It’s How We Play the Game is his first book.

“The fact is, Ed Stack has a heart, and he’s never been reluctant to let people see it.” — Rick H., VP, Executive Editor, on It’s How We Play the Game

“Ed Stack is a giant in our industry…[his] story is not only entertaining but will be of great value to any entrepreneur.”
—Phil Knight, founder of Nike and New York Times bestselling author of Shoedog

“As this surprisingly inspiring book makes clear, organizations can’t grow to a large size unless there’s a unifying vision, a common DNA that is present in even the most far-flung outposts. It’s an extraordinarily difficult feat, this task of migrating your values outward and making them stick—but against all odds Ed Stack seems to have pulled it off. He’s a remarkable leader, and It’s How We Play the Game is a remarkable book.”
—Indra Nooyi, former Chairman and CEO of PepsiCo

“Leadership is doing the right thing when it isn’t popular or easy.  Ed Stack, as this powerful book makes clear, has been that kind of leader.  We can all learn from his example.”
—Mark Kelly, former combat pilot, NASA astronaut, and coauthor, with Gabrielle Giffords, of Enough: Our Fight to Keep America Safe from Gun Violence

“In It’s How We Play the Game, Ed Stack makes the compelling case that leading with the values of sports—like hard work, teamwork and selflessness—matters in business, and most of all, society.”
—Adam Silver, NBA Commissioner

“Ed Stack's story—told with honesty and a deep sense of corporate responsibility—shows that you can build a great business and stand up for what you believe in.”
—Michael Bloomberg, Founder of Bloomberg LP and Three-Term Mayor of New York City

“Ed Stack has created one of the greatest retail emporiums…As this book shows, he is an entrepreneur, corporate steward, and leader of an engaged workforce, but first and foremost, he is always thinking about his customers.”
—John Idol, Chairman and CEO of Michael Kors

“Demonstrates the valuable lessons taught by participating in sports….Ed hasn’t just made a difference for his employees and customers. He has been an important partner with Little League Baseball and many individual teams throughout the country…In our society, it’s not just the people on the field who inspire, it’s leaders like Ed Stack—men and women who bend down to lift people up.”
—Rob Manfred, Commissioner of Baseball

“An awe-inspiring story of overcoming obstacles…If there were more people like Stack running companies, the world would be a better place.”
—Jimmy Dunne, Senior Managing Principal of Sandler O’Neill & Partners

“Paints a fascinating picture of a man who is a fulfilled leader…Stack’s name should be on the impressive roll call of men and women whose will to compete, and success in doing so, offers inspiration and wisdom.”
—Jay Monahan, Commissioner of the PGA Tour

“In It’s How We Play the Game, Stack demonstrates that he’s playing a different game than other retailers, moving past all the clichés about ‘giving back’ and turning his support of local communities into a kind of killer app….Few recent business books are as well-told or as rich in takeaways.”
—Jim Rohr, former Chairman of PNC Financial Services Group

“Ed Stack is not just a great entrepreneur running a big, successful business but a courageous American who is willing to stand up for what’s right. And he’s a talented author.”
—Gert Boyle, Chairman of Columbia Sportswear Company and author of One Tough Mother

It's How We Play the Game

Build a Business. Take a Stand. Make a Difference.

By Ed Stack
LIST PRICE $12.99
PRICE MAY VARY BY RETAILER