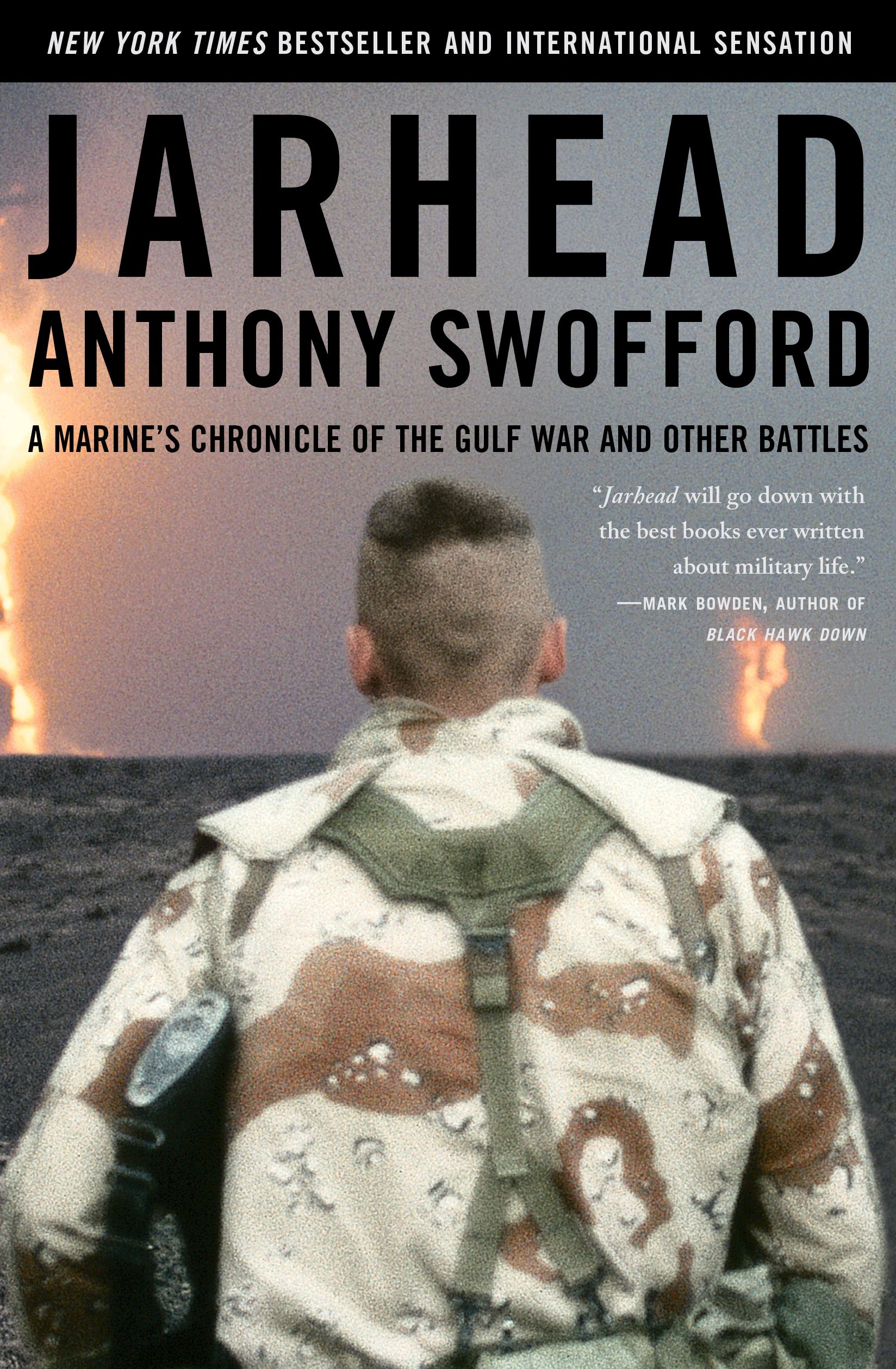 A Marine's Chronicle of the Gulf War and Other Battles

By Anthony Swofford
LIST PRICE $12.99
PRICE MAY VARY BY RETAILER

Anthony Swofford's Jarhead is the first Gulf War memoir by a frontline infantry marine, and it is a searing, unforgettable narrative.
When the marines -- or "jarheads," as they call themselves -- were sent in 1990 to Saudi Arabia to fight the Iraqis, Swofford was there, with a hundred-pound pack on his shoulders and a sniper's rifle in his hands. It was one misery upon another. He lived in sand for six months, his girlfriend back home betrayed him for a scrawny hotel clerk, he was punished by boredom and fear, he considered suicide, he pulled a gun on one of his fellow marines, and he was shot at by both Iraqis and Americans. At the end of the war, Swofford hiked for miles through a landscape of incinerated Iraqi soldiers and later was nearly killed in a booby-trapped Iraqi bunker.
Swofford weaves this experience of war with vivid accounts of boot camp (which included physical abuse by his drill instructor), reflections on the mythos of the marines, and remembrances of battles with lovers and family. As engagement with the Iraqis draws closer, he is forced to consider what it is to be an American, a soldier, a son of a soldier, and a man.
Unlike the real-time print and television coverage of the Gulf War, which was highly scripted by the Pentagon, Swofford's account subverts the conventional wisdom that U.S. military interventions are now merely surgical insertions of superior forces that result in few American casualties. Jarhead insists we remember the Americans who are in fact wounded or killed, the fields of smoking enemy corpses left behind, and the continuing difficulty that American soldiers have reentering civilian life.
A harrowing yet inspiring portrait of a tormented consciousness struggling for inner peace, Jarhead will elbow for room on that short shelf of American war classics that includes Philip Caputo's A Rumor of War and Tim O'Brien's The Things They Carried, and be admired not only for the raw beauty of its prose but also for the depth of its pained heart.

By clicking 'Sign me up' I acknowledge that I have read and agree to the privacy policy and terms of use. Free ebook offer available to NEW CA subscribers only. Offer redeemable at Simon & Schuster's ebook fulfillment partner. Must redeem within 90 days. See full terms and conditions and this month's choices.
This is a raw, irreverent, unforgettable memoir of military life. Swofford was not just a soldier who happened to write, but a writer who happened to be a soldier. His prose is sharp and vivid. In contrast to the real-time print and television coverage of the Gulf War, which was highly scripted by the Pentagon, Swofford's account is authentic, contrarian, and singular.
Throughout Jarhead, Swofford is a tormented consciousness, yet the tone of the memoir shows that his brief, searing war experience has provoked a yearning for reconciliation and the first hope for a new, inner peace.

Discussion Questions:
1. Why do you think Swofford joined the marines? What appealed to him, and what was he looking for?
2. How would you describe Swofford's temperament? How does it differ from the personalities of the other marines? And how does it affect his experience as a soldier?
3. What do you think of Swofford's girlfriend Kristina and their relationship?
4. Swofford shares the unfortunate story of a fellow soldier receiving videotape from his wife. Why do you think she sent that tape and what was your reaction?
5. At one point, Swofford describes placing the muzzle of his M16 in his mouth and visualizing his own death. Swofford writes of the incident, "The reasons are hard to name...It's not the suicide's job to know, only to do" (p. 70). What do you think is the nature of his despair? In this moment, how seriously does he consider suicide?
6. Discuss Swofford's relationship with Troy. How does his friendship and his death affect Swofford? What types of friendships does he build?
7. Although the book is largely populated by men, Swofford often reflects on his relationships with women, from his mother and sister to his various romantic entanglements. What role do you think women play in this book? What do you think Swofford's opinion of women is in general?
8. Discuss Swofford's portrayal of his relationship with his father, himself a veteran of the Vietnam War.
9. Swofford explains the Scout/Sniper shooting procedures in great detail (i.e.: the precise positions of the spotter relative to the shooter and the order in which the various steps are carried out), and he refers to ongoing arguments among spotters and shooters about who has the more difficult job. What is the significance of this near-obsessive procedural detail? How do you think it affects the soldiers' attitude toward the possibility of killing people?
10. "The sad truth is that when you're a jarhead, you're incapable of not being a jarhead, you are a symbol..."(page 119). What do you think about this statement? Would Troy, Fergus, and Swofford's fellow marines agree with this assessment?
11. When Swofford and his platoon arrive home in California, they encounter a disheveled Vietnam veteran. What do you think the veteran means when he says, "Thank you, thank you, Jarheads, for making them see we are not bad animals," (pg. 251)?
12. Discuss the significance of the dog tags Swofford takes from the bodies of three dead Iraqi soldiers. What do they mean to him? Why does he take them and wear them around his neck? How does he feel about Crocket desecrating the dead body of an Iraqi soldier? What do these violations of the Uniform Code of Military Justice reveal?
13. Discuss the book's final paragraph: "What did I hope to gain? More bombs are coming. Dig your holes with the hands God gave you." How do you think the war changed Swofford?
14. Discuss Swofford's attitude toward war. How does it develop and change throughout the course of the book?
15. How do the experiences Swofford describes compare to media portrayals of soldier life in the present conflict in Iraq? How does the current war inform your reading of Jarhead? Has this changed your view of war? 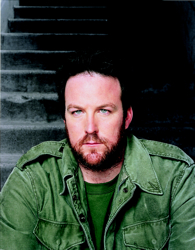 Anthony Swofford served in a U.S. Marine Corps Surveillance and Target Acquisition/Scout-Sniper platoon during the Gulf War. After the war, he was educated at American River College; the University of California, Davis; and the University of Iowa Writers' Workshop. He has taught at the University of Iowa and Lewis and Clark College. His fiction and nonfiction have appeared in The New York Times, Harper's, Men's Journal, The Iowa Review, and other publications. A Michener-Copernicus Fellowship recipient, he lives in New York.

Mark Bowden Author of Black Hawk Down Jarhead will go down with the best books ever written about military life.

The Sacramento Bee A bayonet in the eye...brutal and unforgettable.

Michiko Kakutani The New York Times A searing contribution to the literature of combat, a book that combines the black humor of Catch-22 with the savagery of Full Metal Jacket and the visceral detail of The Things They Carried....An irreverent but meditative voice that captures the juiced-up machismo of jarhead culture and the existential loneliness of combat...Mr. Swofford conveys a chilling sense of what it is like to be under enemy fire, and he also communicates a palpable sense of the fog of war.

A Marine's Chronicle of the Gulf War and Other Battles

By Anthony Swofford
LIST PRICE $12.99
PRICE MAY VARY BY RETAILER