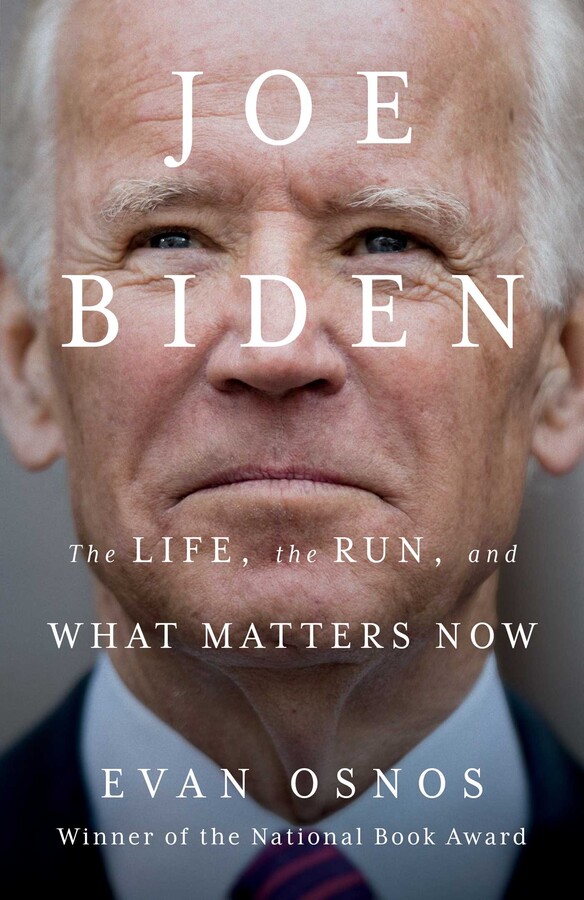 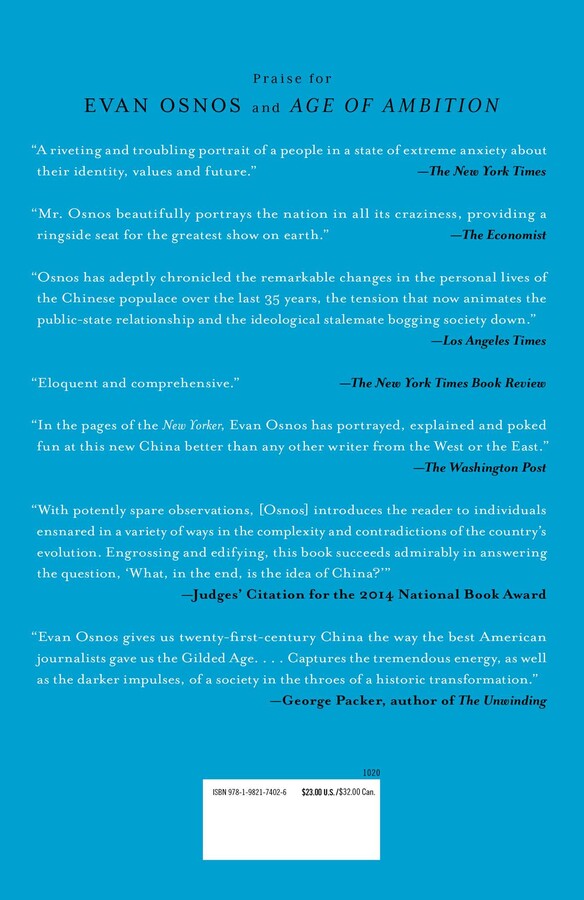 The Life, the Run, and What Matters Now

A FINANCIAL TIMES BEST BOOK OF 2020

President-elect Joseph R. Biden Jr. has been called both the luckiest man and the unluckiest—fortunate to have sustained a fifty-year political career that reached the White House, but also marked by deep personal losses and disappointments that he has suffered.

Yet even as Biden’s life has been shaped by drama, it has also been powered by a willingness, rare at the top ranks of politics, to confront his shortcomings, errors, and reversals of fortune. As he says, “Failure at some point in your life is inevitable, but giving up is unforgivable.” His trials have forged in him a deep empathy for others in hardship—an essential quality as he leads America toward recovery and renewal.

Blending up-close journalism and broader context, Evan Osnos, who won the National Book Award in 2014, draws on nearly a decade of reporting for The New Yorker to capture the characters and meaning of 2020’s extraordinary presidential election. It is based on lengthy interviews with Biden and on revealing conversations with more than a hundred others, including President Barack Obama, Cory Booker, Amy Klobuchar, Pete Buttigieg, and a range of activists, advisers, opponents, and Biden family members.

This portrayal illuminates Biden’s long and eventful career in the Senate, his eight years as Obama’s vice president, his sojourn in the political wilderness after being passed over for Hillary Clinton in 2016, his decision to challenge Donald Trump for the presidency, and his choice of Senator Kamala Harris as his running mate.

Osnos ponders the difficulties Biden faces as his presidency begins and weighs how a changing country, a deep well of experiences, and a rigorous approach to the issues, have altered his positions. In this nuanced portrait, Biden emerges as flawed, yet resolute, and tempered by the flame of tragedy—a man who just may be uncannily suited for his moment in history.

Aforty-five-year-old man—white male, father of three—awoke on the floor of his hotel room. He had been unconscious for five hours. He could barely move his legs. He did not know how he got there. He remembered only a flash of agony; he had given a speech in Rochester, New York, and returned to his room, where he felt a sensation akin to a cleaver parting his skull. For months, he had ignored a strange ache in his head and neck, burying it in Tylenol, blaming it on the ludicrous rigor of running for president while heading the Judiciary Committee of the United States Senate. The campaign had ended in embarrassment—a product of his own arrogance, he admitted to himself—but the head- aches had continued.

The man heaved himself onto the bed. From there, his assistant got him to a plane to Delaware, where doc- tors identified a cranial aneurysm, the ballooning of an artery that fed the brain. His prospects for survival were so grim that a priest was summoned to deliver last rites, even before the man’s wife could be there. In the hours that followed, he was rushed through the slanting snow of a storm to Washington, D.C., where a surgeon warned that the operation might rob him of the ability to speak. “I kind of wish that had happened last summer,” the man replied.

For three months, through more surgery, more complications, he was supine, confined to a hospital bed. Oddly enough, his failure in the presidential campaign had probably saved his life. Had he stayed on the road, crisscrossing New Hampshire and ignoring his symptoms, he might not be there at all. In the depth of his ordeal, a doctor turned to him and said he was a “lucky man.” Seven months passed before the man could get back up and return to work. He told the first crowd he saw that he had been given a “second chance in life.”

More than thirty years after Joe Biden nearly died on his back, the moment is often lost amid the official milestones of his political biography. But that instant contains the defining pattern of his life—a journey of improbable turns, some spectacularly fortunate and others almost inconceivably cruel. Biden’s ambition to reach the highest rungs of American power has driven his rise for more than five decades. When he was barely out of his teens, the mother of a girlfriend (later, his first wife, Neilia Hunter) asked about his professional goals. “Presi- dent,” Biden said, and added, “of the United States.”

His political career placed him at pivotal moments of modern American history, including some of the nation’s defining conflicts around race, gender, crime, health, capitalism, and warfare. He made mistakes, explained himself, and paid a price. Time and again, he defied predictions that he was finished—only to find himself, to his astonishment, beside Barack Obama, in a historic run for the White House. In his speech at the 2008 Democratic National Convention, he said, “Failure at some point in your life is inevitable, but giving up is unforgivable.”

In the vice presidency—the most maligned job in Washington—Biden often projected the look of a man who couldn’t quite believe his good fortune. The trials of his life had relieved him of some solemn self-regard. A British minister once asked him, in a private meeting, for the protocol in addressing one another. Biden gave a theatrical glance to either side, and said, “It looks like we’re alone, so why don’t you call me Mr. President and I’ll call you Mr. Prime Minister.”

By 2020, he was a political veteran marked by so many years and battles that his opponents, and even some of his admirers, questioned the wisdom of yet one more race. And, then, he foiled the predictions once more, emerging as the Democratic nominee for president in a showdown of such grave implication for America’s future that it made a mockery of the usual clichés about the most important election in our lifetime. He was in a one-on-one contest against Donald Trump for an office that was losing its stature as the leader of the free world.

The circumstances of a life in full and a country in peril conspired to put Joe Biden at the center of an American reckoning, prompting an urgent appetite, at home and abroad, to divine what had made him, how he thought, what he carried, and what he lacked. At the very moment that his country was lying spread-eagled before the eyes of the world, Biden had arrived at his season of history.

The lush, well-to-do Wilmington suburbs, in the rolling woods of the Brandywine Valley, are popular with heirs to the chemical fortune of the du Pont family. Their estates and gardens are tucked away in what is known as Delaware’s Chateau Country. On a modest patch, by those standards, Joe Biden and his wife, Jill, live on four sloping acres that overlook a small lake.

On the ninety-ninth day before the election, I pulled into Biden’s driveway. To avoid contagion, his advisers put me in a carriage house, a hundred yards from the home where the family lives. “Welcome to my mom’s house,” Biden called from the bottom of the stairs, an instant before his sweep of white hair rose into view. He reached the second floor of the cottage. He wore a trim blue dress shirt, sleeves rolled to the elbows, a pen tucked between the buttons, and a bright-white N95 mask.

Biden was three weeks away from becoming America’s Democratic nominee for president. The headline on the front page of The Washington Post that morning was “America’s Standing in the World Is at a Low Ebb.” The death toll from the coronavirus pandemic was approaching 150,000, three times as many lives as America lost in Vietnam; the economy had crumbled faster than at any other time in the nation’s history; in Portland, Oregon, federal agents in unmarked uniforms were tear-gassing protesters, whom Donald Trump called “sick and deranged Anarchists & Agitators.” On Twitter that day, Trump warned that the demonstrators would “destroy our American cities, and worse, if Sleepy Joe Biden, the puppet of the Left, ever won. Markets would crash and cities would burn.” 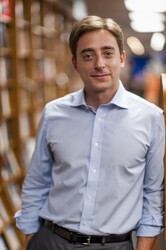 Evan Osnos has been a staff writer at The New Yorker since 2008. His most recent book, Age of Ambition: Chasing Fortune, Truth, and Faith in the New China, won the National Book Award, among other honors. Previously he reported from China, Iraq, and elsewhere for the Chicago Tribune, where he shared a Pulitzer Prize for investigative reporting. He lives with his wife and children in Washington, DC.

“[From] an immensely talented reporter for The New Yorker, Joe Biden ably takes the measure of the man and the politician, presenting a picture of the Democratic nominee that is in a few ways unexpected.”  —The Washington Post

“[A] probing biographical sketch, drawing on vivid reportage from his New Yorker profiles [and] shrewd analysis, the result is a portrait of the candidate that’s smart and evocative.” —Publishers Weekly

“[A] solid foundation for evaluating one of the most important figures in American governance.” —Booklist

“Reading Joe Biden: The Life, the Run, and What Matters Now, a slim but comprehensive and compelling book by the New Yorker writer Evan Osnos, has only strengthened my positive impression of the Democratic nominee.” —Max Boot, The Washington Post

“If you need a rapid and readable Biden briefing, it’s for you.” —Kirkus Reviews

“Osnos draws on his years covering Biden for the New Yorker to provide a rich narrative for the former vice president’s life.” —The National Book Review

“It is impossible to come away from Osnos’s biography without a sense of awe at what Biden has overcome to arrive at this point.” —The Guardian

“Evan Osnos asks how the Democrat candidate has defied odds in the race for the White House.” —Financial Times

“This biography covers the candidate’s career as a senator and vice president as well as his life on the campaign trail.” —The New York Times Book Review

The Life, the Run, and What Matters Now