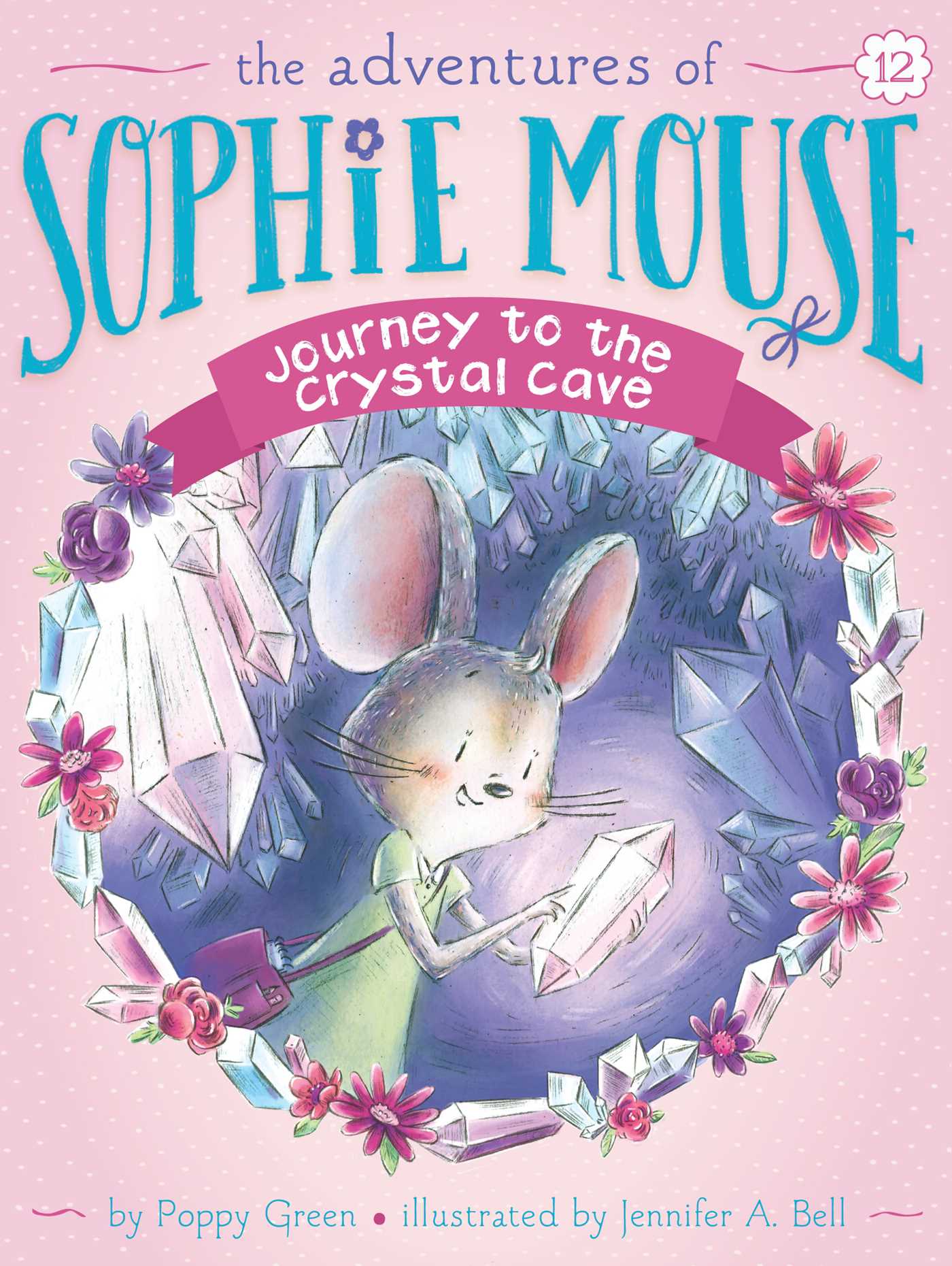 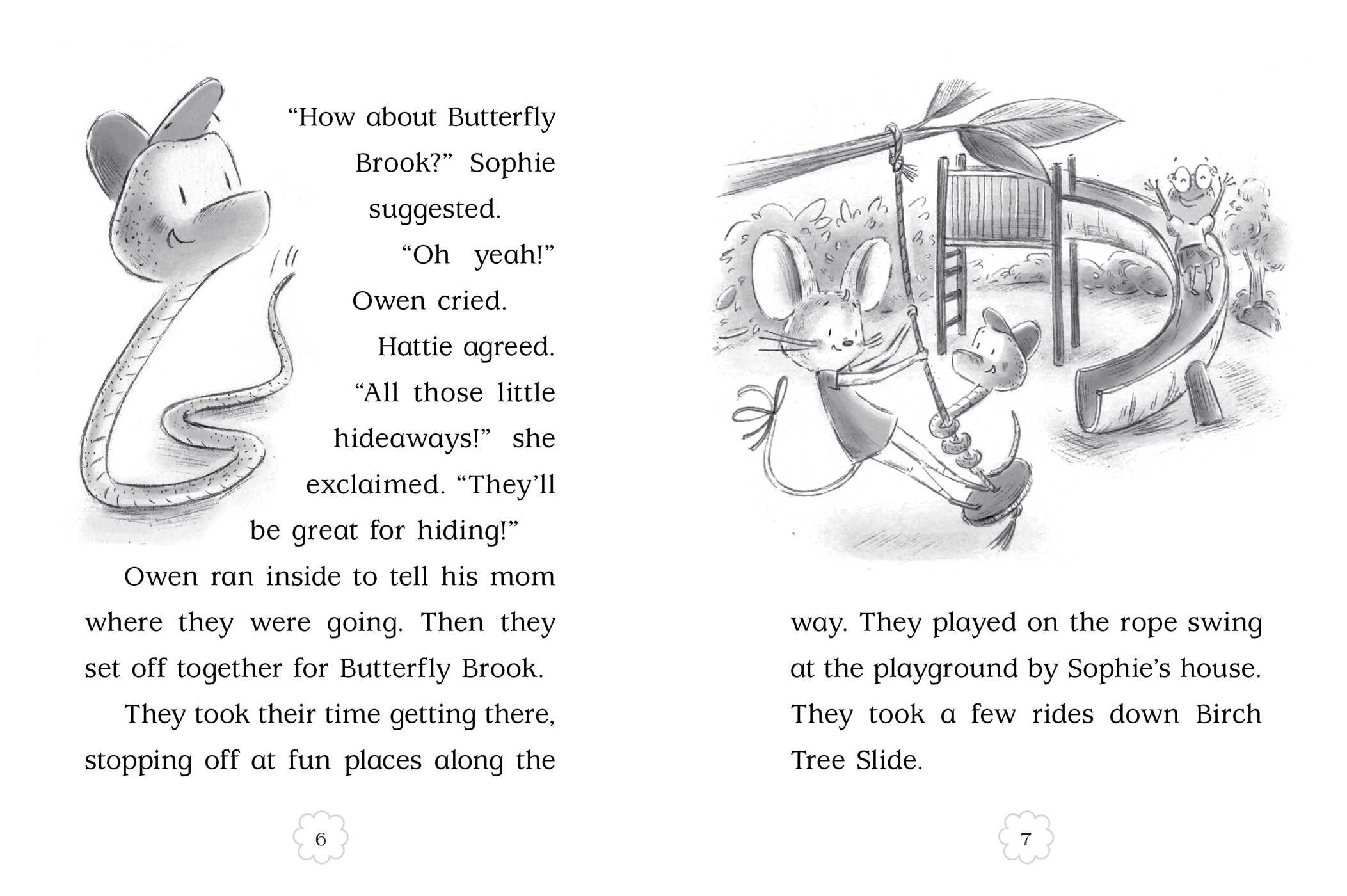 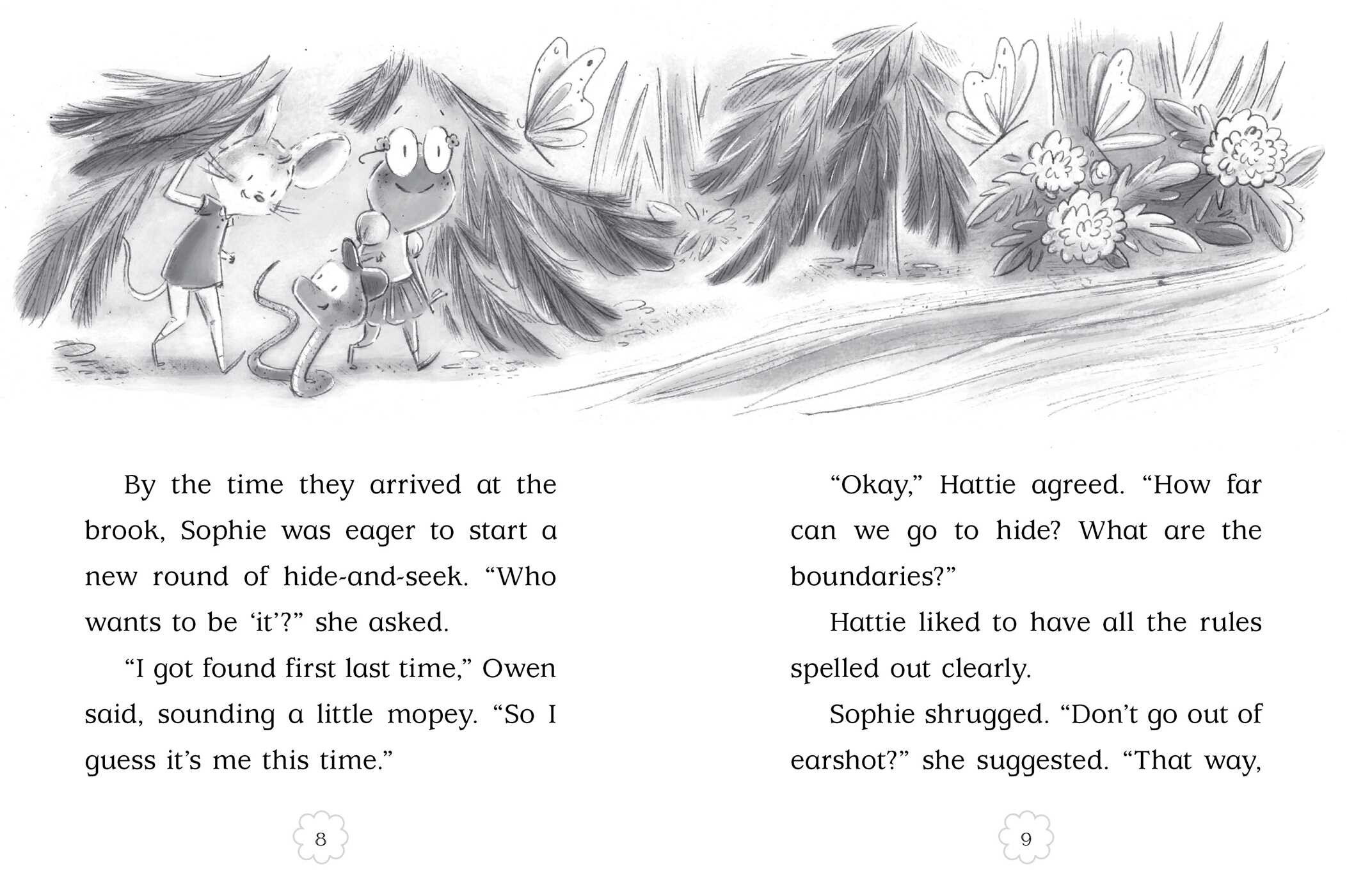 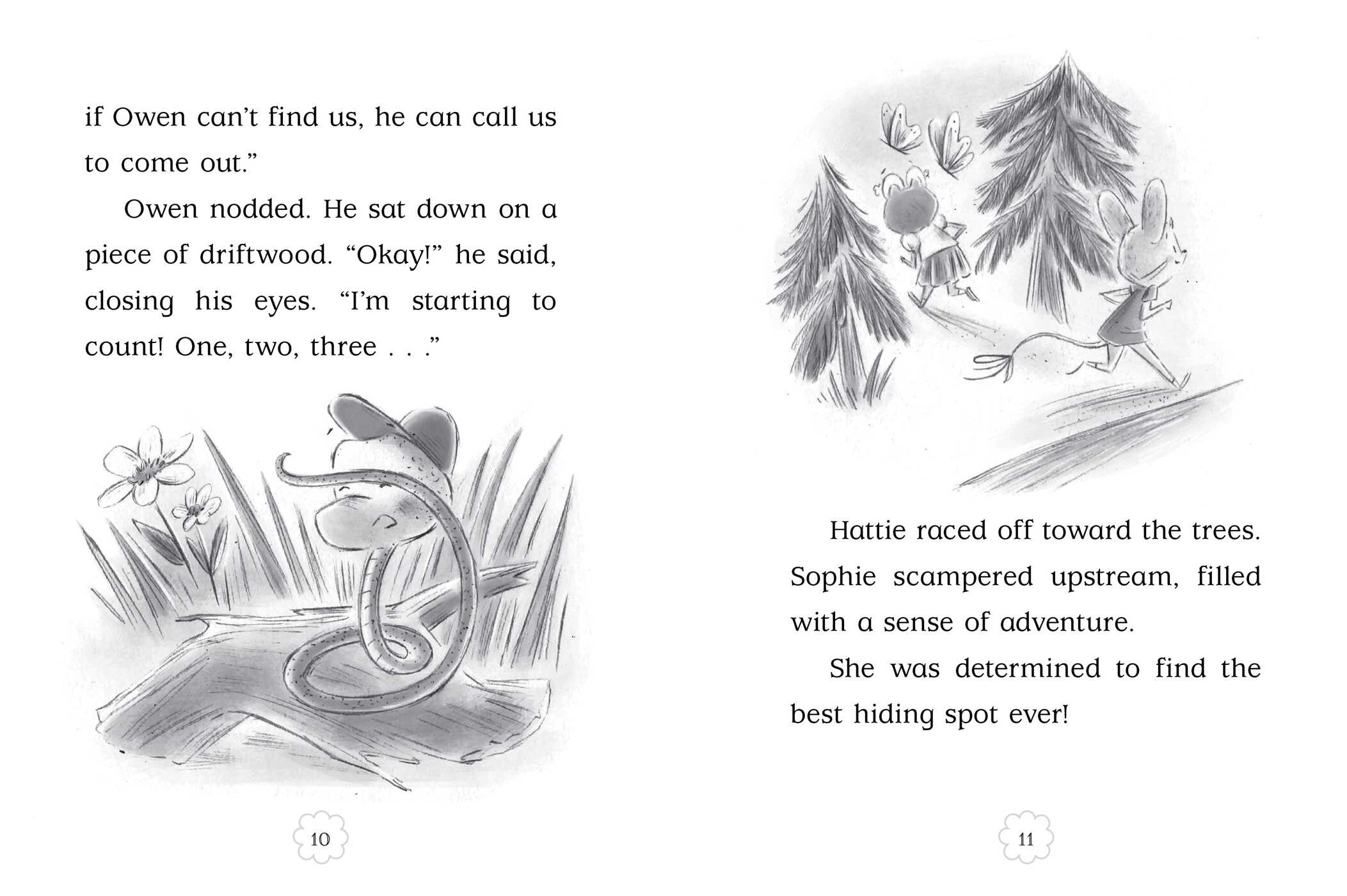 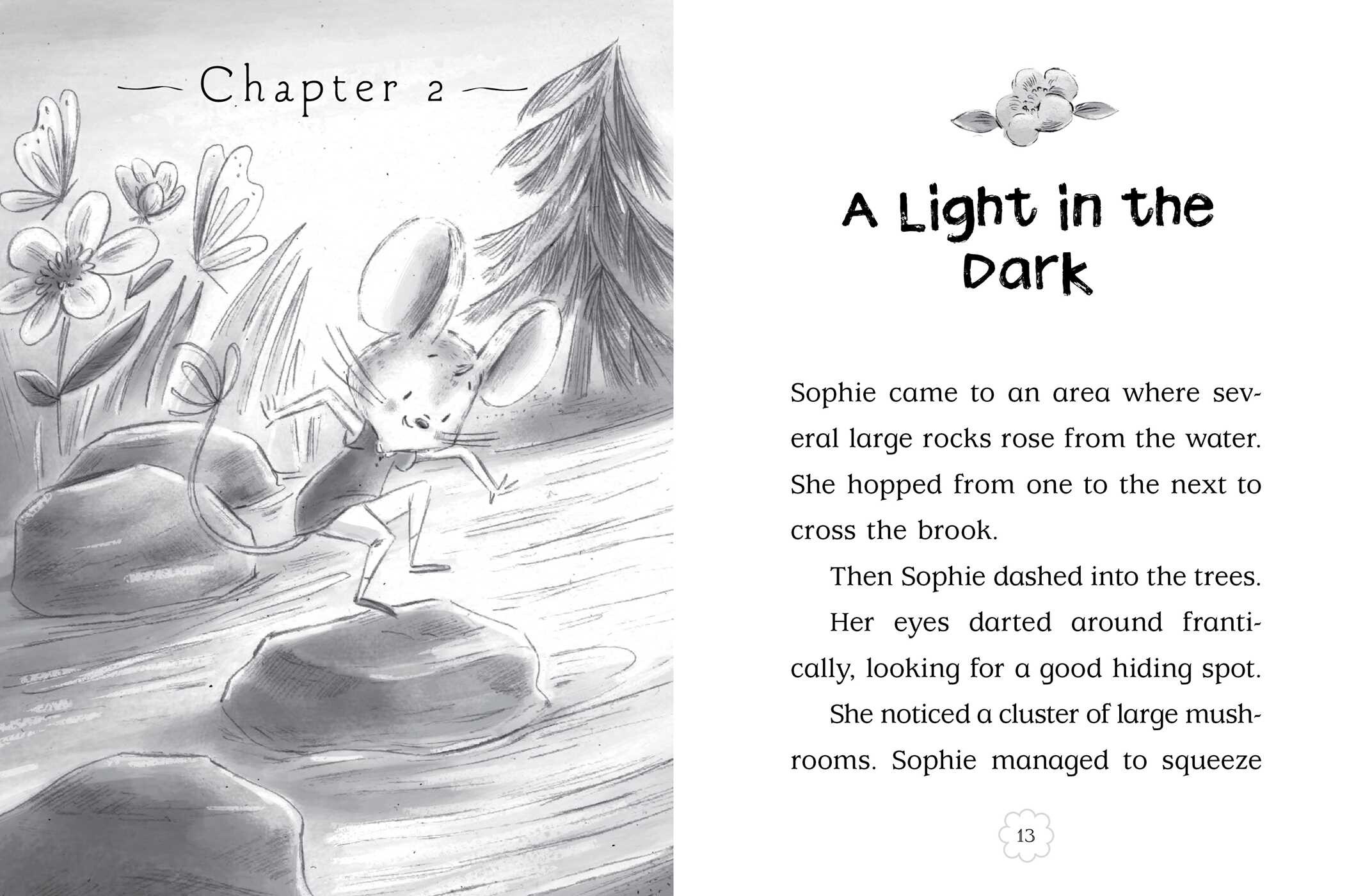 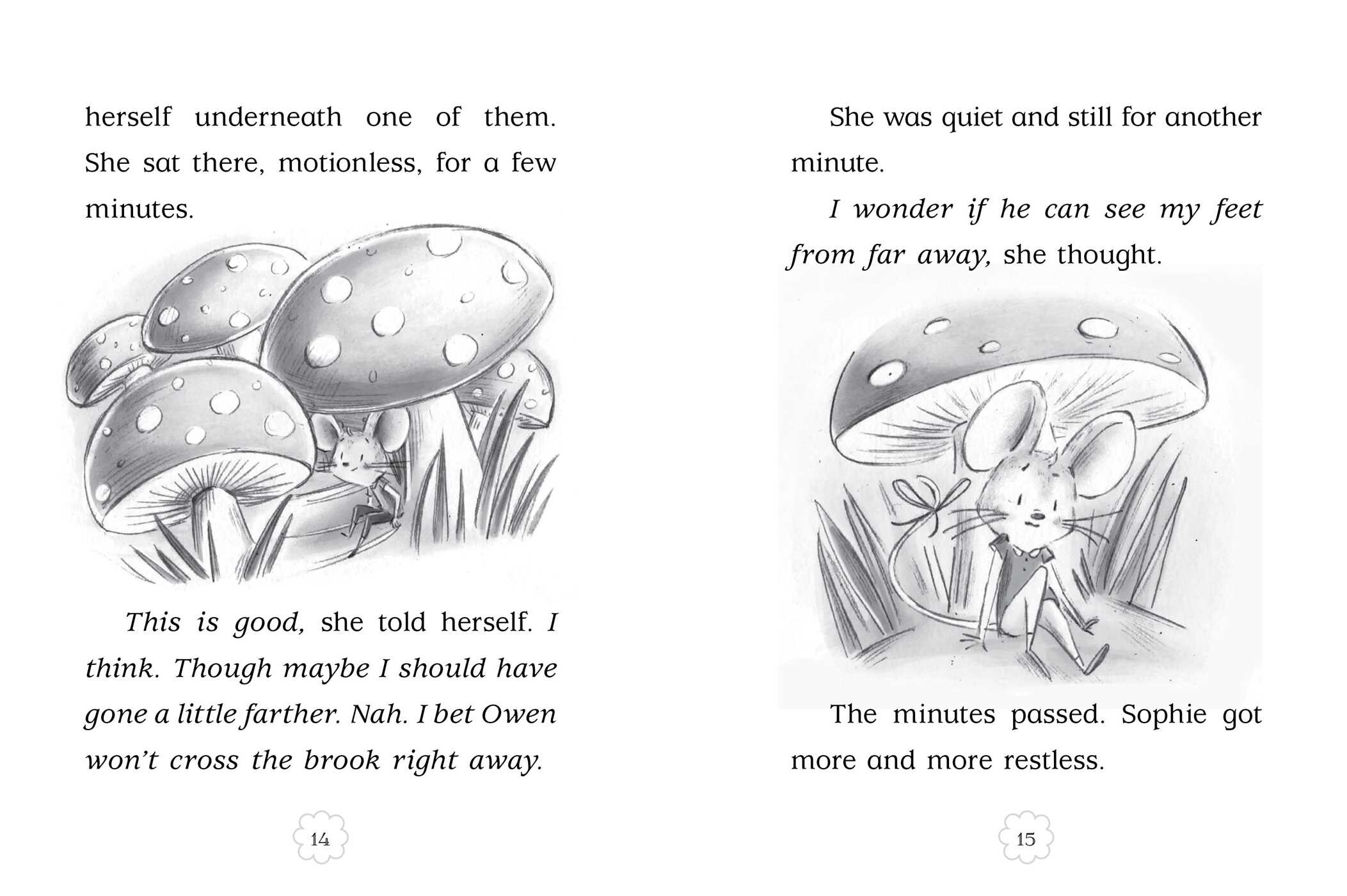 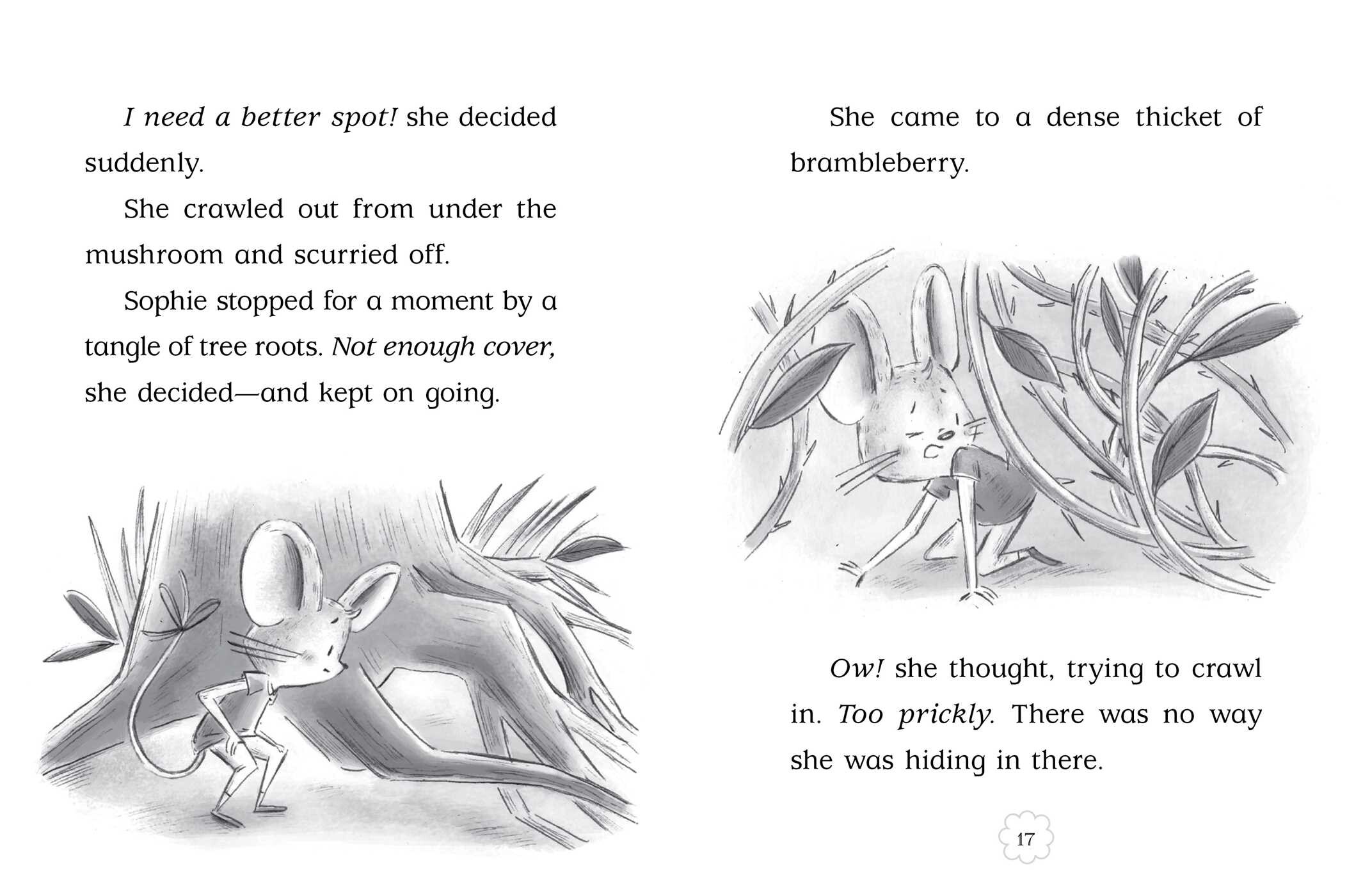 Sophie discovers a mysterious crystal cave, but her friends don’t believe her, in this twelfth charming book of The Adventures of Sophie Mouse series!

Sophie Mouse and her friends are playing hide-and-seek near Butterfly Brook. Sophie finds the perfect hiding spot, but she finds something else, too! It’s a glowing cave. The problem is, when Sophie tells her friends about her discovery, they don’t believe her! After all, who’s ever heard of a cave that glows? Now Sophie is on a mission to prove she’s telling the truth!

With easy-to-read language and illustrations on almost every page, the Adventures of Sophie Mouse chapter books are perfect for beginning readers.

Hide-and-Seek
“Ready or not, here I come!” Sophie shouted.

She opened her eyes and looked around. Owen and Hattie were gone. The three friends were playing hide-and-seek by Owen’s house. Sophie was the seeker.

She listened for a rustle of leaves or a snap of a twig. She sniffed the air. Really, though, she didn’t need any clues. There were only two good hiding places in Owen’s yard.

First, Sophie checked inside the hollow log. It was a tight squeeze for Hattie or herself, but Owen fit easily.

Sophie peered inside. “Found you!” she cried.

Owen wriggled out. “Aww,” he moaned. “That was quick.”

Next Sophie scurried over to a baby fir tree. Hattie was pretty well camouflaged by the needles. But Sophie could see her shoes.

Hattie sighed and climbed out of the tree. “We need a new place to play this game,” she said.

The three of them were quiet as they thought it over.

A picture popped into Sophie’s mind. Lots of large evergreen trees grew along a brook. The lower branches arched down to the ground, creating sheltered areas underneath.

“How about Butterfly Brook?” Sophie suggested.

Hattie agreed. “All those little hideaways!” she exclaimed. “They’ll be great for hiding!”

Owen ran inside to tell his mom where they were going. Then they set off together for Butterfly Brook.

They took their time getting there, stopping off at fun places along the way. They played on the rope swing at the playground by Sophie’s house. They took a few rides down Birch Tree Slide.

By the time they arrived at the brook, Sophie was eager to start a new round of hide-and-seek. “Who wants to be ‘it’?” she asked.

“I got found first last time,” Owen said, sounding a little mopey. “So I guess it’s me this time.”

“Okay,” Hattie agreed. “How far can we go to hide? What are the boundaries?”

Hattie liked to have all the rules spelled out clearly.

Sophie shrugged. “Don’t go out of earshot?” she suggested. “That way, if Owen can’t find us, he can call us to come out.”

Hattie raced off toward the trees. Sophie scampered upstream, filled with a sense of adventure.

She was determined to find the best hiding spot ever!

Poppy Green can talk to animals! Unfortunately, they never talk back to her. So she started writing in order to imagine what they might say and do when humans aren’t watching. Poppy lives on the edge of the woods in Connecticut, where her backyard is often a playground for all kinds of wildlife: birds, rabbits, squirrels, voles, skunks, deer, and the occasional wild turkey.

Jennifer A. Bell is an illustrator whose work can be found on greeting cards, in magazines, and in over a dozen children’s books. She lives with her husband, son, and cranky cat in Minneapolis, Minnesota.

More books from this illustrator: Jennifer A. Bell

SEE ALL
See more by Jennifer A. Bell

More books in this series: The Adventures of Sophie Mouse