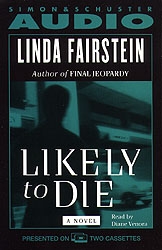 Part of An Alexandra Cooper Novel
By Linda Fairstein
Read by Diane Venora
LIST PRICE $12.99
PRICE MAY VARY BY RETAILER

The real-life work of sex-crimes prosecutor Linda Fairstein brought "riveting authenticity" (Vanity Fair) to her bestselling debut novel, Final Jeopardy. Now Fairstein's fictional counterpart -- smart and savvy assistant D.A. Alexandra Cooper -- returns in "[a] Grisham-esque page turner" (Time) that puts Alex in the line of fire.
New York City's oldest and largest medical center is the scene of a ghastly attack: top neurosurgeon Gemma Dogen is found in her blood-soaked office, where she has been sexually assaulted, stabbed, and designated by the cops as a "likely to die." By the time Alex has plunged into the case, it's a high-profile, media-infested murder investigation with a growing list of suspects from among those who roam the hospital's labyrinthine halls. As Alex's passion to find the killer intensifies, she discovers this hospital is not a place of healing but of deadly peril -- and that she is the next target for lethal violence.
A high-style thriller that sweeps from Manhattan to London to Martha's Vineyard, Likely to Die is an exhilarating tale from a justice system insider and provocative novelist.

By clicking 'Sign me up' I acknowledge that I have read and agree to the privacy policy and terms of use. Free ebook offer available to NEW CA subscribers only. Offer redeemable at Simon & Schuster's ebook fulfillment partner. Must redeem within 90 days. See full terms and conditions and this month's choices.
Likely To Die
Linda Fairstein

1.      In what ways are Alex and the murdered doctor, Gemma Dogen, alike or dislike? Given their outward similarities, do you think that Gemma’s death has any special resonance for Alex?

2.      Although this story is fictional, it reveals some pretty unsettling things about the security of big-city hospitals.  Did the novel change how you think about this world?

3.      What connections does Alex have to the world of medicine?  Do these connections influence the way that she pursues this case?

4.      How would you describe Alex and Mike Chapman’s relationship?  What makes them such a great duo?  This story places them in especially close proximity while they are in England.  Why do you think their relationship remains platonic?  Do you find yourself rooting for them to get together?

5.      There’s a lot we learn in this novel—from the changes in rape laws over the last twenty-five years to the kinds of women that make the best jurors in date rape trials. How does learning about the law and the way that crimes are prosecuted affect your reading of the story?

6.      On the surface, Alex seems like the kind of person who would enjoy letting off steam with a sport like kick boxing, but instead she is drawn to the world of ballet.  What makes ballet so appealing to her?  Is it a good fit for her character?

7.      At one point in the story, Chapman comments on the murders and remarks, “We’re all likely to die” (p. 282).  What point is he trying to make?  Where else does this phrase appear and how is it important to the story?

8.      While inviting Alex to a dinner, her friend Joan chides her, “don’t be a sex crimes prosecutor tonight…be a girl” (p. 200).  Do you agree with Joan that sometimes Alex forgets to be a girl?

9.      The media is an important presence in Alex’s world, despite the fact that she is often at odds with it.  How do the reporters that constantly dog her heels add to the flavor of the book—and help move the story along?

10.  On their flight to England, Alex and Chapman talk about famous people whom they admire and whose shoes they’d like to stand in.  What people did each of them choose, and what do their picks say about them?

11.  In the acknowledgments, Linda Fairstein tells us that “every crime in this book is based on an actual event.”  Does learning this change your perception of the novel?

12.  At a pretty crucial point in the investigation, Alex and Chapman are sent off to England for a conference.  How does this interlude serve the novel?  Did it break up the story or enhance it?

13.  Why does Alex come so uncharacteristically unglued when she learns about the connection between Drew Renaud and Gemma Dogen?
Linda Fairstein

Linda Fairstein was chief of the Sex Crimes Unit of the district attorney's office in Manhattan for more than two decades and is America's foremost legal expert on sexual assault and domestic violence. Her Alexandra Cooper novels are international bestsellers and have been translated into more than a dozen languages. She lives in Manhattan and on Martha's Vineyard.

Part of An Alexandra Cooper Novel
By Linda Fairstein
Read by Diane Venora
LIST PRICE $12.99
PRICE MAY VARY BY RETAILER

More books in this series: An Alexandra Cooper Novel