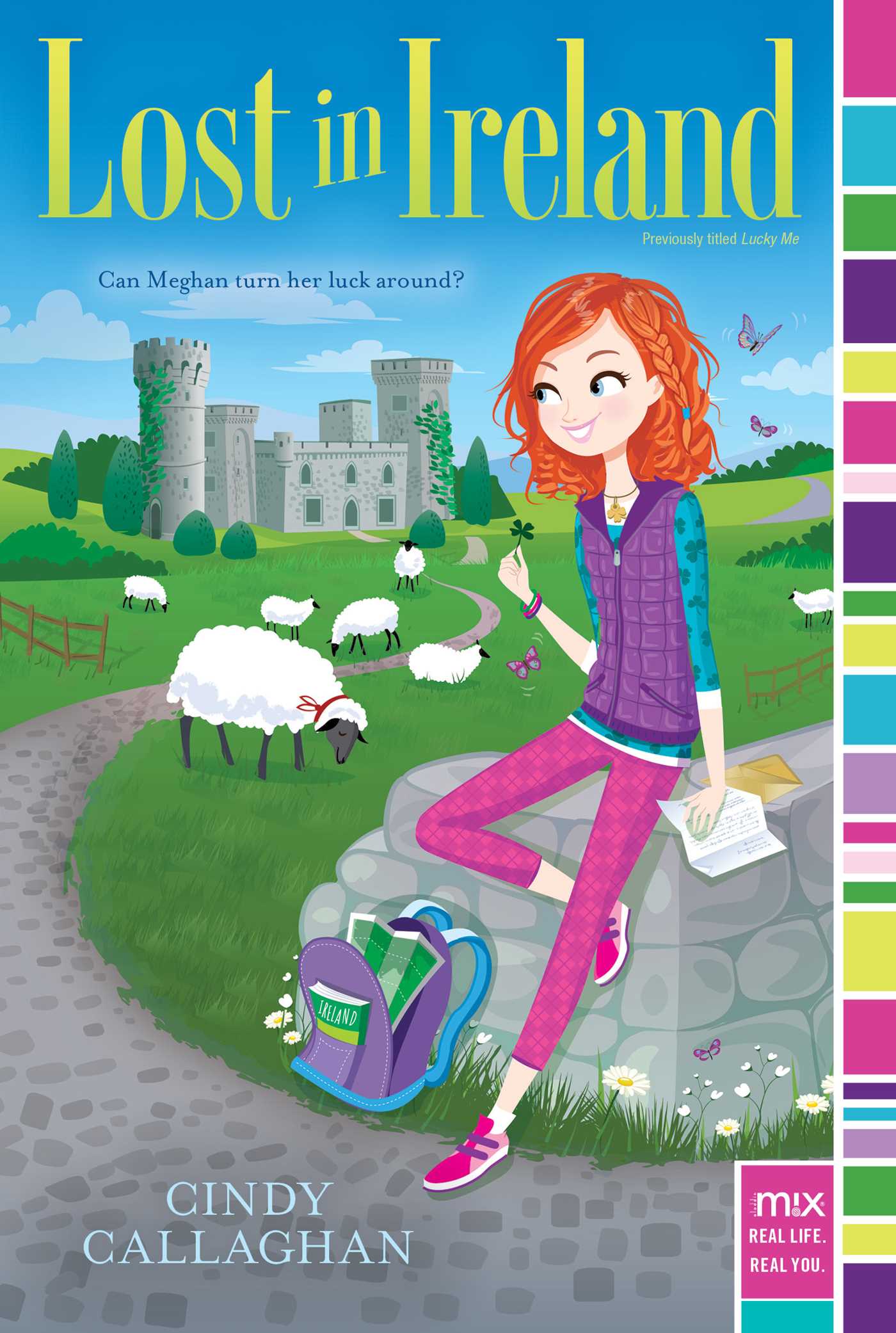 A superstitious girl must try to turn her horrible luck around during a family trip to Ireland in this M!X novel from the author of Lost in London.

Meghan McGlinchey is the most superstitious girl in her family—and probably in the entire state of Delaware. When she receives a chain letter from a stranger in Ireland, Meghan immediately passes it on, taking only a tiny shortcut in the directions.

But after a disastrous day, made complete by losing the election for class president and embarrassing herself in front of the entire school, Meghan realizes that tiny shortcut was a big mistake. Thankfully, her family was already headed to Ireland on spring break, and Meghan makes it her mission to find the original sender and break her extremely unlucky streak.

With the help of an eccentric cast of characters—and one very cute Irish boy—can Meghan figure out a way to stop her bad luck? Or is she cursed forever?


If I had to pick one thing that I believe in more than anything else, it would be this: LUCK. I’m Meghan McGlinchey, the most superstitious thirteen-year-old girl in Delaware, and possibly the world.

For example, I never got out of bed when my digital clock read an odd number. Odd number = bad luck.

I dressed in a snap because every day it was the same school uniform—boring plaid skirt, plain white shirt, itchy button-up navy-blue sweater, matching headband, horrendous blue leather shoes, and kneesocks. The outfit was—how should I say this?—ugly!

I dashed down the stairs, especially careful to skip the thirteenth step today because it was a very important day, one I’d been looking forward to for weeks. I was running for eighth-grade class president. And today was the election. I had done a stellar job campaigning FOREVER. If I didn’t totally mess up my speech, I was pretty sure I was gonna win. With all the practicing I’d been doing, it would take a major freak of nature for me to mess it up.

I passed my four sisters and parents scrambling around in the kitchen. I opened a can of food for my cat, Lucky. He ran over when he heard it pop. I scratched his ears as he lapped up the food.

I loved Lucky, but he and I had a problem. He was a black cat. And people like me, we didn’t mix well with black cats. But we had an understanding: He didn’t cross my path, and I took good care of him. It worked for us.

The kitchen was louder than usual this morning. My younger sister Piper (the fifth grader) yelled at one of my older sisters, Eryn (the eleventh grader), “Why did you touch my playlist? Why? WHY?”

Dad yelled across the kitchen to my mom, “Can you put a bagel in the toaster for me?”

The baby, Hope, cried while my oldest sister sang her an Irish lullaby to calm her. It wasn’t working, so she tried some applesauce, which the baby threw across the room. It nearly hit my white shirt, but I ducked out of the way just in time. SPLAT! The applesauce hit the wall behind me.

Phew, that was lucky!

I stood at the front door, under the horseshoe mounted on the wall and next to my snow globe collection, watching the insanity.

The living room was a mess with suitcases and duffel bags. We were leaving the next morning for Ireland, where we would spend spring break. The purpose of the trip was for my father to meet his newly discovered sister. You see, he’d been born in Ireland. Sadly, something happened to his parents when he was just a kid, and he’d been raised at a home for boys.

Until a few months ago he hadn’t thought he had any family. But thanks to some online research, he’d found a long-lost sister. I imagined that when he met her, he’d introduce me as his middle daughter and president of Wilmington Prep’s eighth-grade class. It was gonna be totally impressive.

I crunched the granola bar I’d packed in my backpack the night before—instant breakfast. With a little planning, my morning was the way I liked it: mayhem-free.

In fact, I liked most things organized. I might have been the most organized eighth grader at Wilmington Prep, an all-girls private school that went from kindergarten through twelfth grade. This meant that Piper and Eryn were in my school. If you knew either Piper or Eryn, you’d know this wasn’t a good thing. (Piper was known as the bigmouth, while Eryn was quiet and filled with a bad attitude. I’d heard a lot of nicknames for her, most made up by my bestie, Carissa. None of them were nice.)

While I waited for someone to realize it was time to leave, I flipped through a Forever 21 catalog.

“Meghan,” Mom called through the chaos. “You have a letter on the table.”

“Yes,” she said. “You know, the regular old-fashioned paper kind that’s delivered by a mailman.”

I stepped around the chaos. Sure enough, on the hall table was a letter addressed to moi.

Who writes letters anymore when you can just text or e-mail? The postmark on the envelope said Limerick, Ireland. Hmmm.

Chain letters have existed for centuries, and many have traveled around the world. A United States police officer received $25,000 within one day of sending his letters. However, another woman ignored it and lost her life’s fortune because she broke the chain. A Norwegian fisherman thought for sure he would never find true love, but just two days after sending his letters, he met the woman of his dreams.

To get your luck and avoid the unlucky consequences, you must:

• Add your name below and remove the name above yours

• Mail it to three people within six days

I didn’t know anyone by that name. How does she know me? That wasn’t important now. What was important was that I send this letter to three people ASAP. No, double-ASAP. Maybe I could get the good luck as soon as today—for the election—and avoid those “unlucky consequences.”

I went into my mom and dad’s home office and rummaged around.

“What are you doing in there?” Mom called over the havoc.

That would be too late. Maybe I could get a couple from the school office. I only needed three. “How about stamps?”

“Sorry. The baby used them as stickers. I can buy more after vacation.”

After vacation wasn’t today, and I needed the luck today.

Eryn bumped me out of her way, causing me to drop the letter. “Move it, buttmunch,” she said. She stepped on the letter as she left the house. (This is what I meant about her attitude—bad.)

Piper did pretty much the same thing on her way out, not because she had attitude issues but because she wasn’t paying attention.

Shannon picked the letter up for me. She was twenty-two years old and definitely the nicest of my sisters. She commuted to the University of Delaware, and itched to finish school so she could move out of our house and “find herself,” whatever that meant.

I took the letter, followed Shannon to the car, and climbed into the back with Piper. Eryn sat shotgun. Always. I didn’t even try to beat her to the front seat anymore. Shannon always dropped us off at Wilmington Prep, then headed to UD. She picked us up later, on her way home. After school, we did homework or whatever until Mom or Dad got home from the law firm where they worked together. They were always home for a late full-family dinner, when we talked about our day, whether we wanted to or not.

On our drive Piper chattered about our spring break trip, while I just stared out the window.

“What do you guys know about chain letters?” I asked.

Shannon said, “You need to send ’em right away, don’t you?”

I could feel Eryn rolling her eyes.

I didn’t answer her; I responded to Shannon. “I don’t have any stamps or envelopes, and I want the good luck today.”

“Why don’t you e-mail it?” Shannon asked. “You could do that right now on your phone.”

Piper said, “Problem solved. Shannon is supersmart. . . .” She continued to ramble on while I typed the letter quickly with my thumbs. I reread it to make sure I hadn’t made any mistakes. I put my name on the bottom and didn’t put Clare’s. When I finished, Piper was still talking. “She gets As in college. That’s a lot of hard work.”

I hit the send button on my phone, and e-mail chain letters went out to three friends from summer camp. “Okay. It’s done. Let the good luck begin!”

“Oh, nothing,” she said with a smirk. “Let me know how that works for you. On second thought, don’t. That would mean you’d be talking to me.” She made a grossed-out face that I caught in the side mirror. “But any moron knows that you can’t e-mail a snail-mail chain letter. It’s cheating. And chain letters have a way of messing with cheaters.”

I couldn’t have any uh-oh.

Cindy Callaghan is the author of the middle grade novels Lost in London, Lost in Paris, Lost in Rome, Lost in Ireland (formerly titled Lucky Me), Lost in Hollywood, the award-winning Sydney Mackenzie Knocks ’Em Dead, Just Add Magic (which is now a breakout streaming original series), and its sequel Potion Problems. She lives in Wilmington, Delaware.