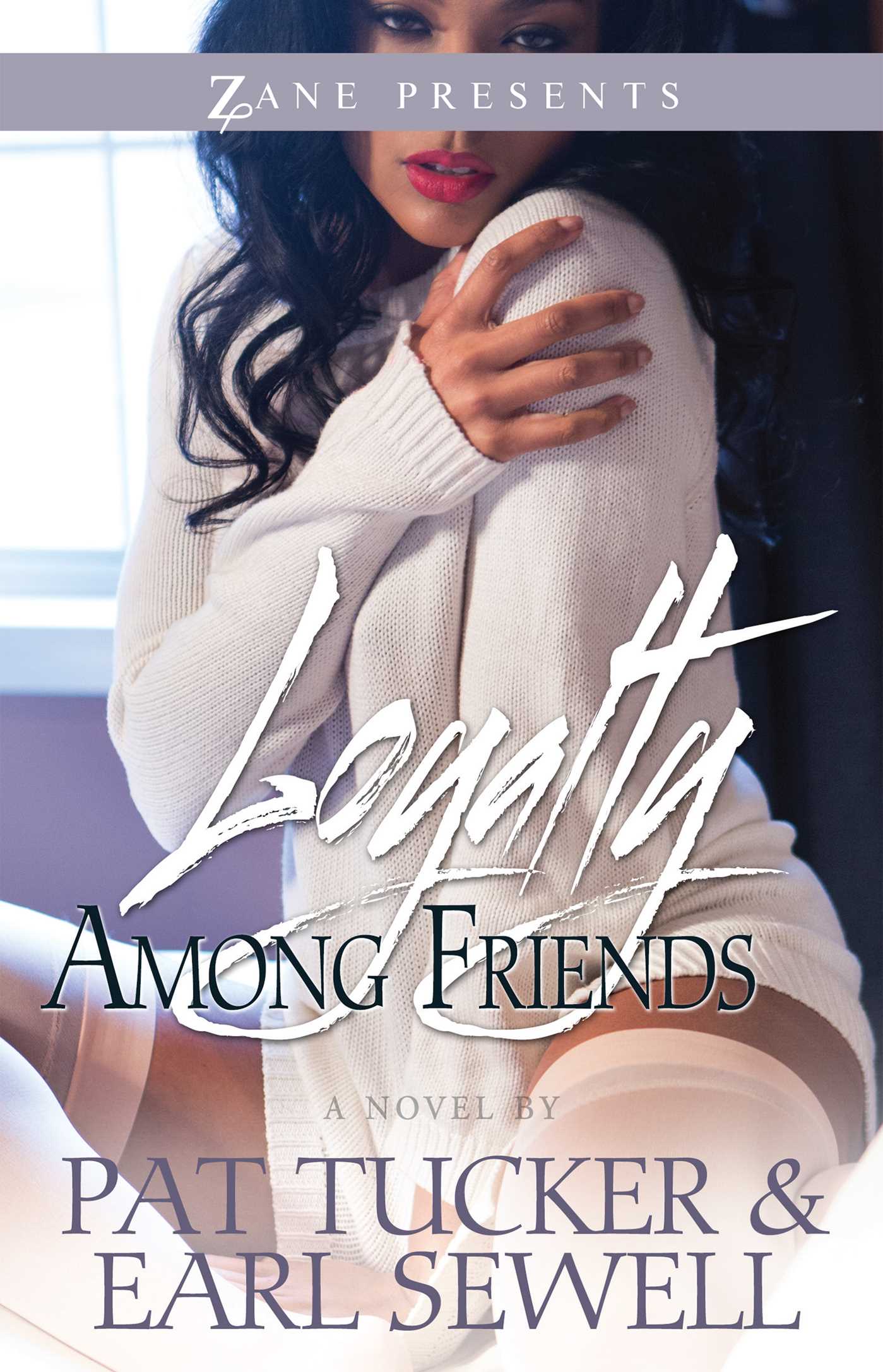 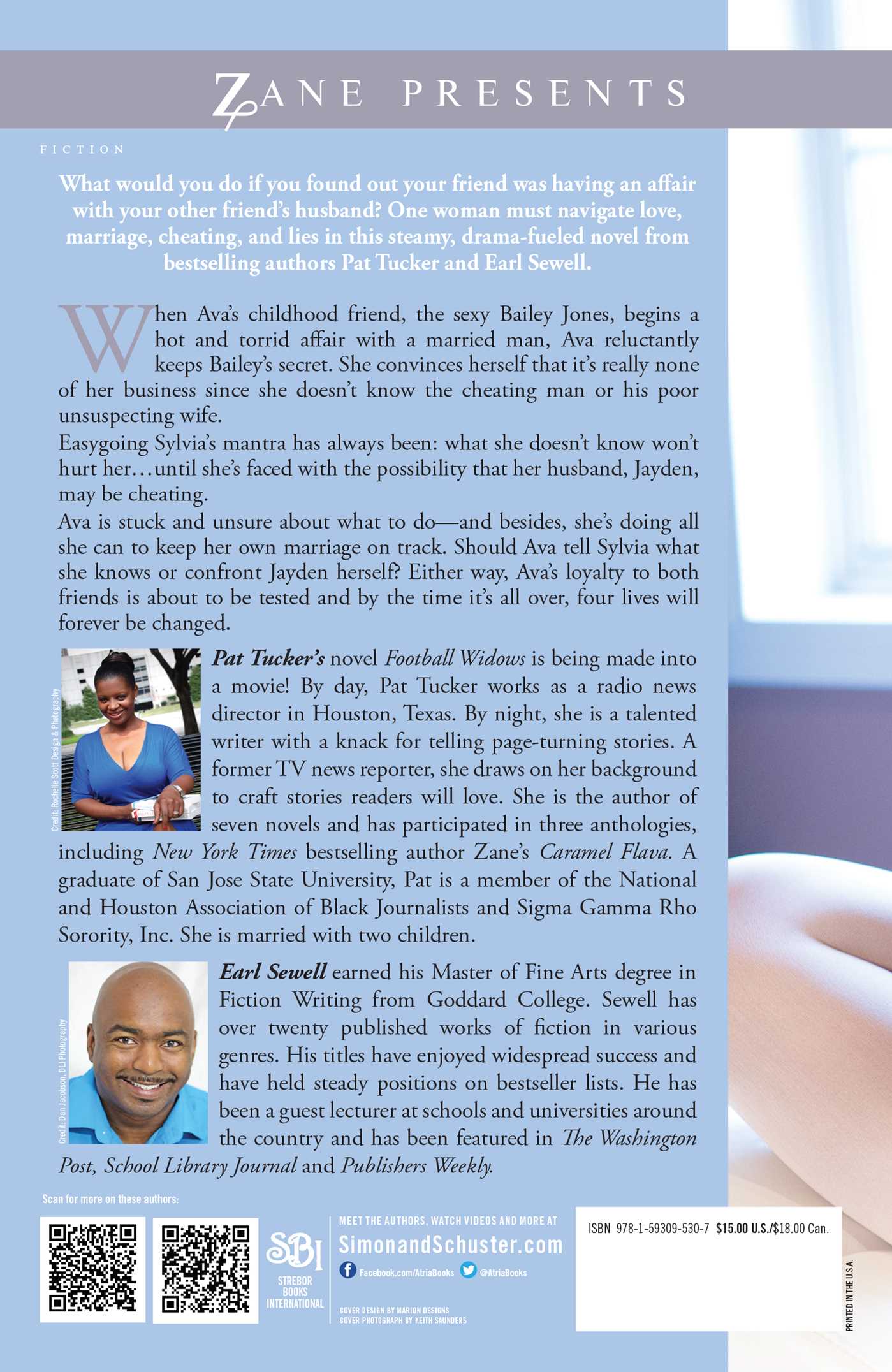 What would you do if you found out your friend was having an affair with your other friend’s husband? One woman must navigate love, marriage, cheating, and lies in this steamy, drama-fueled novel from bestselling authors Pat Tucker and Earl Sewell.

When Ava’s childhood friend, the sexy Bailey Jones, begins a hot and torrid affair with a married man, Ava reluctantly keeps Bailey’s secret. She convinces herself that it’s really none of her business since she doesn’t know the cheating man or his poor unsuspecting wife. But when Ava’s best friend, Sylvia Monroe, confides in her, things get a lot more complicated…

Easygoing Sylvia’s mantra has always been: what she doesn’t know won’t hurt her…until she’s faced with the possibility that her husband, Jayden, may be cheating. When Sylvia tells Ava, she is blown away by the revelation that Jayden is none other than Bailey’s mystery man!

Ava is stuck and unsure about what to do—and besides, she’s doing all she can to keep her own marriage on track. Should Ava tell Sylvia what she knows or confront Jayden herself? Either way, Ava’s loyalty to both friends is about to be tested and by the time it’s all over, four lives will forever be changed.

Loyalty Among Friends CHAPTER ONE Bailey
When I finally came up for air and seductively crawled up the length of Richard’s lean, naked body, I could feel the heat rise, among other things. With his essence still on my lips, I was ready for him to reciprocate the pleasure I had just delivered.

“Daayum, that was good,” he managed.

His voice was shaky, and he was still breathing hard like he had trouble catching his breath. I beamed with pride. If I didn’t know anything else, I knew how to please a man. He rubbed my breasts as I rolled over to his side of the bed, and tried to adjust my body next to his.

“Whheew, girl! It’s been a while since I had some expert head like that. That was good!”

You’re damn right, it was good. I have the aching jaws to prove it.

Usually, I didn’t like playing tit-for-tat like that, but this one seemed a little slow. His body was nice, but he was a lazy lover, and who had time for that? I didn’t have any problems letting a man know exactly what I wanted.

Suddenly, Richard rose and sat upright. He swung his long legs over the edge of the bed and onto the floor. I lay there confused, wondering whether he needed some water or something before round two.

He looked over his shoulder at me. “Uhh, what’s your name again?”

I began to fume. “Bailey. You know, like the liquor.” I didn’t even try to hide the sarcasm in my tone.

I drew my eyebrows together. “Are you serious right now?”

“Oh, nah, nah. It ain’t nothing like that. I mean, it was real nice meeting you, but like I said, I gotta get up real early in the morning.”

It was my turn to pop up in bed like a jack-in-the-box. The heat that crawled up my naked back threatened to sear my hairline. My neck started twisting before I could get my words out good. “You’ve got to be kidding, right?” I hissed.

I got up from his bed, and stormed around his junky room, picking up my clothes. What man in his right mind brings a woman home to this pigsty?

“It’s Bailey!” I snarled, as I snatched my bra off of the old-fashioned lamp shade and put it back on.

If looks could kill, Richard would’ve been a corpse. Once I was dressed, he grabbed a robe and got up to follow me to the front door.

“Shit, where’s my purse?” I looked around his crowded living room, frustrated. I really need to be more selective.

He glanced around the dark room, like he was trying to be helpful. I wanted to knee him in his groin, to take away some of the bliss I had blessed him with earlier.

I grabbed my purse from his coffee table and rolled my eyes.

He opened the door and waited.

Before I stepped out, I looked at him and said, “Save the bull; you don’t even have my number, remember? I followed you from the club and we were gonna exchange numbers once we got here.”

When the fool yawned again, I shook my head.

“Later. Hope you’re late for your meeting,” I said, as I walked out.

“Oh yeah, thanks,” the idiot responded.

I felt like crap as I walked down the long hallway from his apartment and got on the elevator. There had to be a better way. I was sick and tired of meeting losers and falling for their lame lines and excuses. At the club, good ol’ Richard was all gung-ho about hooking up, and us having a possible future together.

He had filled my head with so much bull that he had me thinking we might actually make it to the altar. I knew I had just met him hours earlier, but he’d fed me so many lines about being tired of the dating scene, I thought he might be different. He’d said he was ready to leave the clubs and slow down. I could relate to everything he’d said. I felt the same way.

I wasn’t trying to screw him the very first night we met, but I thought we had mad chemistry. I agreed with him that we needed to get to know each other better in a quieter place. At the time, it made sense since his apartment wasn’t far from the historic Gaslamp Quarter in downtown San Diego.

Besides, he had already told me his intentions, and I felt like I needed to take a chance if I ever wanted to find true love.

As I drove home, I couldn’t help but beat myself up. I was successful in every other aspect of my life. I was college educated with a MBA, worked in commercial real estate, and took very good care of my body. I didn’t understand why I couldn’t find a man. Scratch that. Bump a man. I wanted a husband!

Hell, I had no problems finding men. They were drawn to me like flies to shit! Unfortunately, I couldn’t seem to hang on to a decent one to save my life.

Thank God I had enough sense not to tell Richard that I lived close by too. I lived at one of San Diego’s trendiest addresses. The Alta was a soaring twenty-one-story building with designer stores, cafes, and restaurants. The mixed-use building also had a combination of trendy lofts, condos, and penthouses. Every day, I walked into spectacular views of the scenic San Diego Bay, and at night, it was sparkling city lights.

My two-bedroom condo had everything—dramatic, vaulted ceilings, tons of window walls that allowed natural light to pour into every corner of the space, and a large, private terrace. The only thing missing was my Mr. Right.

After I pulled into the underground parking garage, I got out of my car and tried to push thoughts of my horrible night aside.

“I’m done with the losers in the club. I mean it!” I muttered as I rode the elevator up to my place. I was physically and emotionally exhausted.

The sun was coming up by the time I showered and changed for bed. As I lay in my massive, four-poster, king-sized bed unable to sleep, I considered taking an Ambien. I quickly decided against it, since I was meeting my best friend, Ava, for brunch and I didn’t want to oversleep.

Suddenly, thoughts of whether I’d share my story with her crowded my mind. Ava and I had been friends since the second grade. But our lives had taken such different paths that sometimes I put distance between us on purpose.

I loved Ava like the sister I never had, but the truth was, I looked better than her. I was more successful, yet she was happily married, and I was still miserably single. It just didn’t make sense.

Over the last five years, we’d grown closer and I was happy about that. I told myself it wasn’t Ava’s fault I couldn’t find a husband. It sure wasn’t for a lack of trying. Both Ava and her husband, Isaac, had tried to fix me up several times, but nothing ever stuck.

I decided I’d tell her about what had happened last night, but I’d give her the abbreviated version. What in the hell was so wrong with me? In the darkness, I lay wide awake, staring up at the ceiling.

“Dear God, why did you make me so beautiful, yet unlovable?”

By day, Pat Tucker works as a radio news director in Houston, Texas. By night, she is a talented writer with a knack for telling page-turning stories. She is the author of Somebody Has to Pay, The Cocktail Club, Sideline Scandals, Party Girl, Daddy’s Maybe, Football Widows (soon to be a movie), Daddy by Default, and Lachez (an original e-short). She is the coauthor with Earl Sewell of Loyalty Among Friends and A Social Affair and has participated in three anthologies, including New York Times bestselling author Zane’s Caramel Flava. A graduate of San Jose State University, Pat is a member of the National and Houston Association of Black Journalists and Sigma Gamma Rho Sorority, Inc. She is married with two children.

Earl Sewell attended Columbia College in Chicago where he studied screen and fiction writing. Earl’s YA novels in his Keysha and Friends series have made him a librarian and teen fan favorite. He currently resides in South Holland, Illinois.