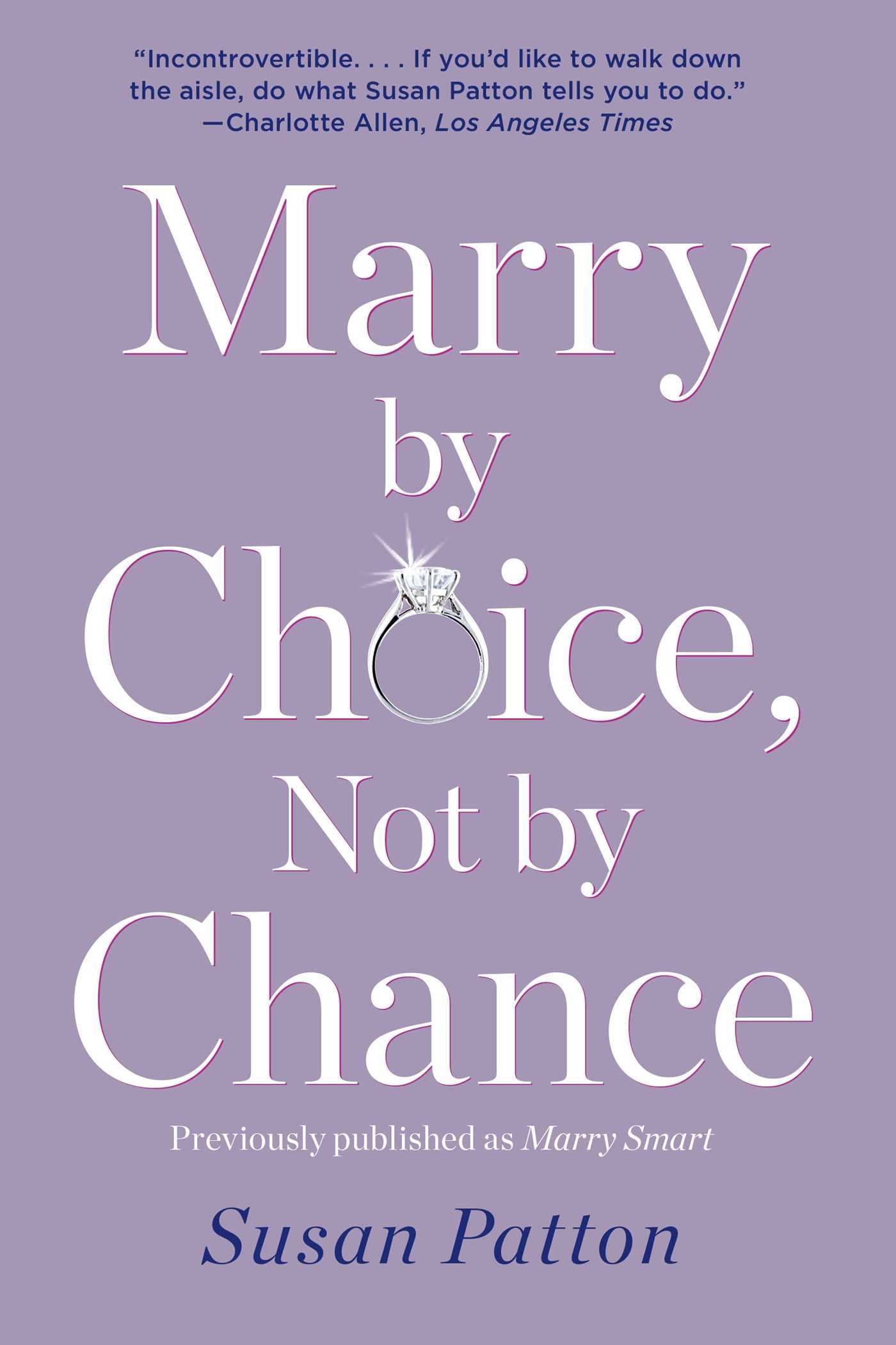 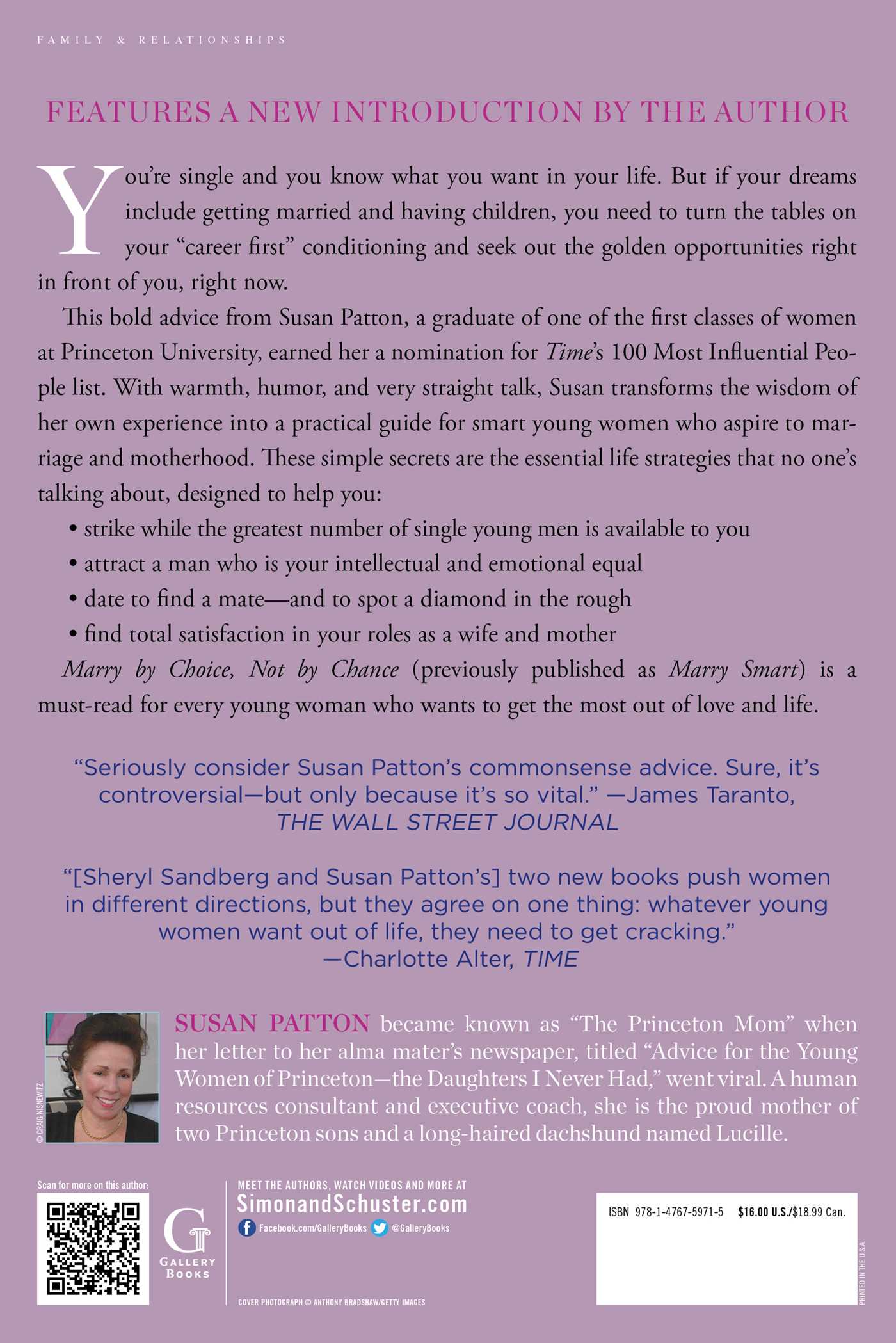 Marry by Choice, Not by Chance

Advice for Finding the Right One at the Right Time

Previously published as Marry Smart and now updated with a new foreword responding to the controversy that followed its initial release, this is the unvarnished truth about marriage, motherhood, and happiness from the “Princeton Mom.” Says James Taranto of The Wall Street Journal, “Every smart young woman should seriously consider Susan Patton’s commonsense advice. Sure, it’s controversial—but only because it’s so vital.”

A graduate of one of the first classes of women at Princeton University, Susan Patton has heard smart young women admit they aspire to marriage and motherhood but have no model for pursuing those goals. Reflecting on the choices she made in her early twenties, she’s boldly turned the tables on our “career first” conditioning and suggests that you seek out the golden opportunities right in front of you, right now.

In Marry By Choice, Not By Chance, Patton shares the wisdom of her experience with warmth, humor, and very straight talk. But this is not your mother’s dating guide—Marry By Choice, Not By Chance celebrates the vital achievements of traditional marriage and motherhood, and gives you the essential life strategies that no one’s talking about, including how to strike while the greatest number of single young men is available to you; attract a man who is your intellectual and emotional equal; date to find a mate; and find total satisfaction in your roles as a wife and mother.

Whether or not you are in college, whether your future plans are clear or still undecided, Marry By Choice, Not By Chance is a must-read for all young women who want to get the most out of love and life.

Marry Smart Introduction to the Paperback Edition
IT SEEMS I STRUCK A NERVE.

In the past few months, I’ve been called names that are so off base that I keep looking behind me, thinking that they must be talking about someone else. “Crazy.” “Retrograde.” “Elitist.” “Stupid.” “Evil.” I’m really none of those things, but I understand that when you’re in the public eye and people disagree with you passionately, they will throw everything they’ve got at you. It’s okay. I’m a tough gal. The hysteria, the name-calling, the vitriol all point to the fact that this is a conversation that has been suppressed for far too long and very much needed to be initiated.

Everybody has an opinion about dating, mating, marriage, and motherhood, and now people are talking about these taboo topics. I’ve heard from friends I knew in elementary school, people I haven’t thought of in fifty years; friends from middle school in the Bronx; clients and candidates I’d long lost touch with; Princeton acquaintances I’ve never seen at reunions. And I’ve made many new friends—people who contacted me to share their views about planning for personal happiness and send me links to relevant articles and videos. I’ve gotten to know journalists, broadcasters, television producers, network executives, radio programmers, publicity people, and the green room of every major broadcast studio in New York and elsewhere. (There is a distinct correlation between the quality of a program and the sumptuousness of their green-room snacks).

And being nominated for the Time 100 was an honor, as they say, just to be nominated.

So why has my book generated such extreme responses? I suppose that when you challenge several generations of conventional wisdom, it gets people talking—and that’s good. My intent has always been to start a conversation that encourages young women to think about what they really want, and plan strategically for their future.

What is so outrageous about telling young women who aspire to marriage and motherhood to plan for their personal happiness sooner rather than later? With the aggressive marketing of extreme options to overcome age-based infertility, doesn’t it make sense to remind young women that they have a limited window of opportunity to bear their own children—and that in terms of their fertility, forty is not the new thirty? And isn’t it just common sense to suggest that they take advantage of their best chance to connect with the age-appropriate, single, like-minded young men . . . their classmates? Depending on where you are in your life, these things can be hard to hear.

Perhaps for some, my words hit a little too close to home.

At the core of this book is a message of empowerment that comes from taking personal responsibility—for yourself, your happiness, your success, and your safety. It’s important to remind young women that they aren’t the victims of their lives, but the architects. They can have professional success as well as domestic bliss if they plan for all of it wisely.

Perhaps the most outraged criticism of me was for my comments about personal responsibility. But I believe that at a time when violent assault on campus is an all-too-frequent occurrence, personal responsibility is a vital key to risk prevention. To suggest that young women bear little or no responsibility for their own safety is illogical, irresponsible, and dangerous. Women must be mindful of the visual and behavioral signals they are sending and not get so drunk or stoned that they can’t get out of a social situation that is headed south. For their own safety, they must be in control of themselves. I’m not blaming victims of violent crimes—I’m saying don’t be a victim!

Being in control means taking responsibility, staying safe, planning thoughtfully, keeping focused and listening to our inner selves to pursue what we really want in our lives . . . even if that includes the traditional roles of wife and mother.

Clearly, my advice isn’t for everyone. If you are all about your career—and only your career—then this book probably isn’t for you. But if you know that you someday want to be married and have children, you’d be wise to take my advice and start planning for this sooner rather than later. I’m not stating facts based on opinion, but opinions based on my observations as an experienced, well-educated woman, a mother, and human resources professional.

And again, it’s just advice. Take it or leave it!

It is not surprising that so much of the public response has been critical. Those who agree with me simply don’t have the same need to be outspoken as those who disagree with me.

The private responses that I have received from hundreds of young women, young men, parents of teenagers, grown women coping with regret and wishing this advice was given to them decades ago, and so many others have been truly heartwarming and validating. I appreciate the many feminist moms and progressive dads who quietly assure me that they have been sharing this same wise advice with their young daughters for years. They’re afraid to say it out loud for fear of being attacked by the liberal-thinking groups that are all about diversity . . . except ideological diversity. If you think differently than they do, then they are completely intolerant and often nasty. I understand that the need to stay out of the firing line and be seen as politically correct remains overwhelming for many.

I smile to think about how many television interviewers leaned in to me just before (or after) our segment and whispered something like “I totally agree with everything you say, but you know that I have to go after you, right?”

Even the ultraliberal Jon Stewart, who lampooned me unmercifully on The Daily Show—and, honestly, what could be more flattering than being lampooned by Jon Stewart?—displayed my book prominently for more than eight minutes on his twenty-two-minute national broadcast. Despite his entertaining protest, I wouldn’t be surprised if he had a copy of this book put aside for his young daughter.

A more media-savvy person might have anticipated the backlash and personal attacks, because that’s just the way anonymous commentary and social media work. They could have predicted that my broader positions would be condensed and contorted into sound bites that make little sense out of context. But the vitriol surprised me. I did not expect such screaming outrage—and much of it, frankly, is faux outrage. There are groups and individuals who feel their agenda has not been given adequate attention, so they decided to distort my message for the sake of drawing attention to their own underappreciated causes. There’s been a lot of parsing of words and playing of semantic games when the truth is that we all want the same thing—for young people to be happy, to be healthy, to pursue their goals and dreams in the best possible way, and to act responsibly. I’ve just put those thoughts in terms that are more straightforward—and less politically correct—than most people are willing to own.

Some people crave celebrity. I never have. I value my privacy and the ability to run out to the supermarket or the post office in sweatpants and without makeup. Being recognized by strangers is an unexpected and dizzying experience. It’s forced me to up my game in terms of what I look like when I leave my apartment, which isn’t a bad thing—and, honestly, a little bit of fame is fun!

I’m all for planning, but you can’t plan for things that you can’t even imagine. I hoped that my book would generate some attention and encourage young women to plan for their personal happiness, but the incredible response and controversy it created was more intense than anyone could have predicted.

Has all the critical commentary made me reconsider my thinking and change my opinions?

Nope, far from it. It’s reinforced them! 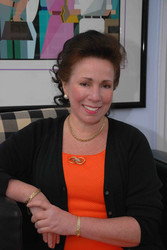 Susan Patton is a first-generation American and was in one of the first classes of women to graduate from Princeton in 1977. She is a first-time author, a human resources consultant, and an executive coach in New York City. She is the proud mother of two Princeton sons, a daughter-in-law who also graduated from Princeton, and a long-haired red dachshund named Lucille.

Marry by Choice, Not by Chance

Advice for Finding the Right One at the Right Time