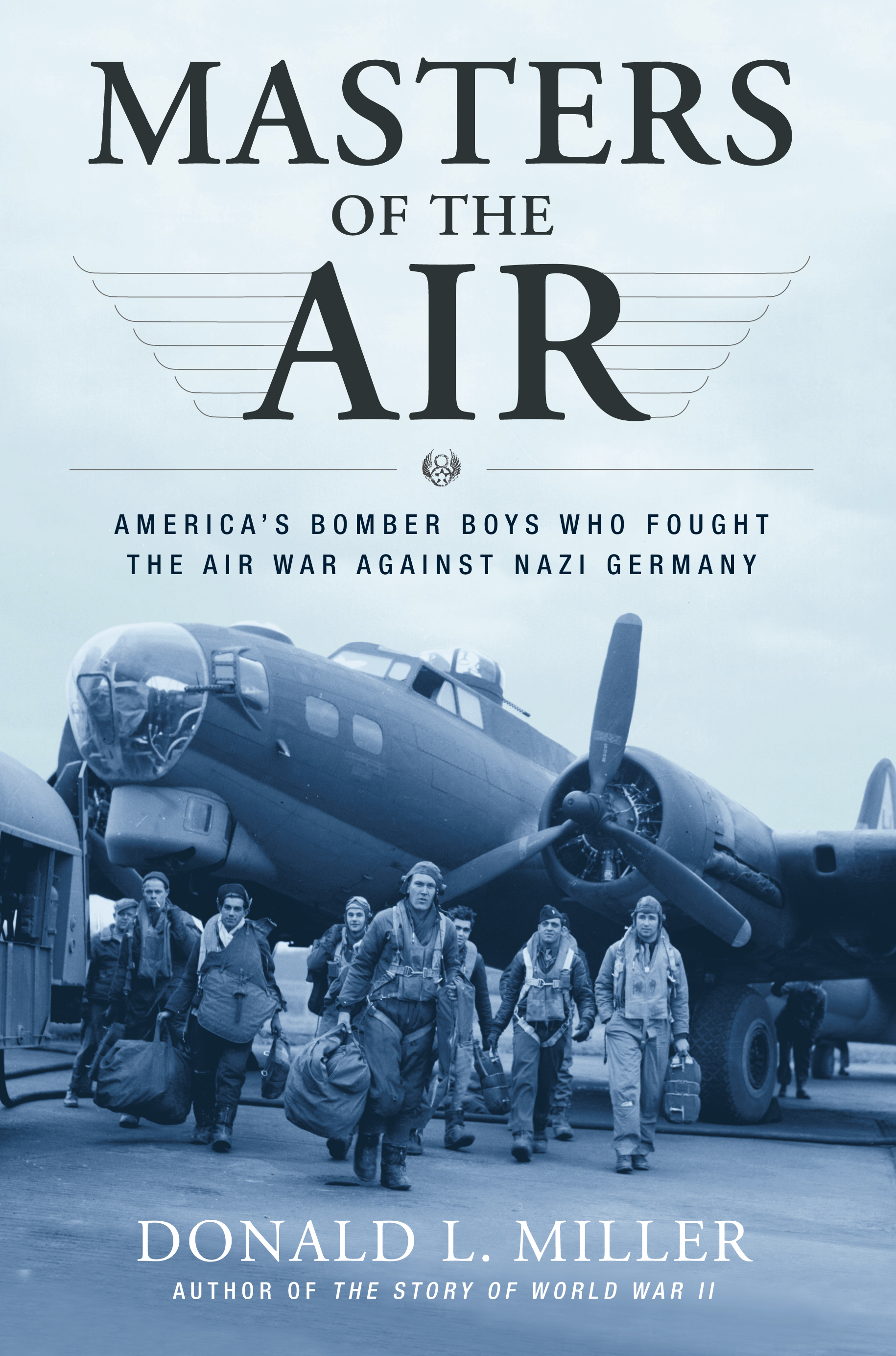 Masters of the Air

Soon to be a major television event from Apple TV, Masters of the Air is the riveting history of the American Eighth Air Force in World War II, the story of the young men who flew the bombers that helped bring Nazi Germany to its knees, brilliantly told by historian and World War II expert Donald Miller. The Masters of the Air miniseries will be the companion to Tom Hanks and Steven Spielberg’s Band of Brothers and The Pacific.

Masters of the Air is the deeply personal story of the American bomber boys in World War II who brought the war to Hitler’s doorstep. With the narrative power of fiction, Donald Miller takes you on a harrowing ride through the fire-filled skies over Berlin, Hanover, and Dresden and describes the terrible cost of bombing for the German people.

Fighting at 25,000 feet in thin, freezing air that no warriors had ever encountered before, bomber crews battled new kinds of assaults on body and mind. Air combat was deadly but intermittent: periods of inactivity and anxiety were followed by short bursts of fire and fear. Unlike infantrymen, bomber boys slept on clean sheets, drank beer in local pubs, and danced to the swing music of Glenn Miller’s Air Force band, which toured US air bases in England. But they had a much greater chance of dying than ground soldiers.

The bomber crews were an elite group of warriors who were a microcosm of America—white America, anyway. The actor Jimmy Stewart was a bomber boy, and so was the “King of Hollywood,” Clark Gable. And the air war was filmed by Oscar-winning director William Wyler and covered by reporters like Andy Rooney and Walter Cronkite, all of whom flew combat missions with the men. The Anglo-American bombing campaign against Nazi Germany was the longest military campaign of World War II, a war within a war. Until Allied soldiers crossed into Germany in the final months of the war, it was the only battle fought inside the German homeland.

Masters of the Air is a story of life in wartime England and in the German prison camps, where tens of thousands of airmen spent part of the war. It ends with a vivid description of the grisly hunger marches captured airmen were forced to make near the end of the war through the country their bombs destroyed.

Drawn from recent interviews, oral histories, and American, British, German, and other archives, Masters of the Air is an authoritative, deeply moving account of the world’s first and only bomber war.

"Masters of the Air is a piece of history that accurately and comprehensively tells the story of the Eighth Air Force going mano a mano against a tough and determined foe. The incredible cost to both sides is recounted in riveting detail. It left me shaken."

-- Lt. Gen. Bernard E. Trainor, USMC (Ret.) and coauthor of Cobra II: The Inside Story of the Invasion and Occupation of Iraq

"Miller's work is always extraordinary but this large volume is especially remarkable for its valuable recovery of details, like all the psychiactric ruin of the many bomber boys assigned to kill German civilians. This is a rare account of the American Eighth Air Force, and with so many readers hoodwinked by fantasies of The Good War, it deserves wide acceptance and ultimate enshrinement as a classic."

-- Paul Fussell, author of The Great War and Modern Memory

"When I learned that Don Miller had written a history of the air war against Germany, I knew that readers would be transported as virtual eye witnesses to this aerial battle field. His gripping reconstruction of what was happening in the planes is matched by the best account yet of what the bombings were doing to Germans on the ground. This book bears the Miller trademark: a strong narrative supported by solid history."

"Masters of the Air is a fresh new account of the incredible rise of the American air force from young men learning their trade on the job in combat to an irresistible force that swept the vaunted Luftwaffe from the skies. Author Donald L. Miller knits together the big events of the bombing campaign with illuminating individual human stories of the heroes who lived and died over Germany."

"Over the first years of World War II, the only American casualties on European soil were flyboys shot out of the sky. Long before Normandy, America's bomber boys waged the Allies' longest WWII campaign and brought the war to Hitler. Now we are fortunate that the incomparable Donald Miller has brought the memory of these Masters of the Air back to us."

-- James Bradley, author of Flags of Our Fathers and Flyboys

"Masters of the Air is masterful narrative history, the elegantly interwoven story of the men and boys who first took the war to the heart of Germany. Vivid and meticulous, judicious but not judgmental, Donald L. Miller chronicles the air war over Europe in all its heroism and horror."

"Donald L. Miller's Masters of the Air is a stunning achievement. The compound effect of the book's narrative vitality and attention to human detail is terrific in all the meanings of the word - terrifying, extraordinary, highly admirable. What a story it is!"
-- David McCullough

"For sixty years we have waited for a history to equal the epic saga of the Eighth Air Force's struggle with fighters, flak and weather on a battlefield moving at three miles per minute five miles above the earth's crust. Now it is here. With brilliant artistry, Don Miller paints the story from the pallet of the voices of the men who manned the planes or waited them out."
-- Richard B. Frank, author of Downfall: The End of the Imperial Japanese Empire

Masters of the Air