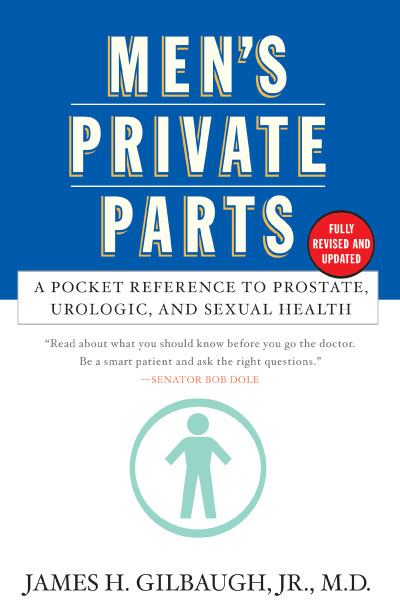 A Pocket Reference to Prostrate, Urologic, and Sexual Health

Straight Answers to Your Most Pressing Intimate Questions
Drawing on more than twenty-five years of clinical experience and familiarity with the anxieties and fears men have about their health, the physician known for years to Men's Health newsletter readers as "Dr. Private Parts" knows just what worries men enough to seek help. Covering everything from "Is this normal?" questions to cancer treatment options, Dr. Gilbaugh puts locker-room misconceptions to rest, and offers the facts as well as up-to-date treatment advice on:

Answer: No man thinks his penis is big enough. Penis size, however, has nothing to do with climax or orgasm.

Problem 2: I take longer to realize an erection now than I did when I was younger.

Answer: Possibly. Erections are reached most quickly during adolescence, the years of spontaneous erections. As a man ages beyond his thirties or forties, direct stimulation of the penis may be required to produce an erection.

Problem 3: My erections are not as stiff as they were when I was younger.

Answer: This is often true. The firmest erections are reached during adolescence; hormones and blood vessels operate differently after teen years have passed. A certain reduction in stiffness may be expected.

Problem 4: I can't get one erection after another, as I once could.

Answer: The refractory period, the time it takes to get another erection after ejaculation and orgasm, increases with age. It is very brief for a teenager, but can be twenty-four hours in later years. This is normal.

Problem 5: I lose my erection during sex more frequently than before.

Answer: Again, this may be a result of the aging process at work. Lack of concentration, distracting noises, fear of interruption, and other environmental influences -- including your partner -- can affect performance.

Problem 6: My penis requires more stimulation than in the past to reach orgasm.

Answer: Through the aging process, again, all things slow down. This includes sensitivity, nerve conduction, and blood-vessel activity. As a man ages, more stimulation is needed for orgasm.

Problem 7: I will become impotent if I have a prostate operation.

Answer: Not true. Most prostate operations should not interrupt a man's ability to have an erection and successful intercourse.

Answer: Not true. Most men fear this operation because they think it is very painful, but it isn't. The operation is usually performed under a spinal anesthetic, which allows complete consciousness without pain.

Answer: Not true. Isolated episodes of impotence can happen during sexual encounters at any age and are not unusual. These blank periods usually are associated with stressful situations, initial sexual encounters, or alcohol or drug overuse.

Problem 10: I am done if I fail to reach orgasm.

Answer: Not so. As a man ages, it is not uncommon to fail to reach orgasm during sex at least occasionally. But it is also easier to get another erection if there was no ejaculation with the last one.

Problem 11: I ejaculate a smaller amount of semen than I once did.

Answer: True. A decrease in volume of ejaculate is normal as a man ages. Older men, in their seventies and eighties, may not ejaculate at all but still have orgasms.

Problem 12: Ejaculation is not effective unless it is powerful.

Answer: Not true. In a man's prime, ejaculate can spurt two feet, but the process loses vigor as age affects muscle and nerve functions and blood supplies.

Answer: Nonsense. Lack of education and feelings of guilt promote myths of this sort, which have no basis in scientific fact.

Answer: Maybe. Alcohol in small amounts can stimulate interest in sex, but in larger amounts it is a depressant and can cause impaired function and even impotence.

Problem 15: As I get older, my penis gets smaller.

Answer: Untrue. As you get older, your stomach gets fatter, so proportionately your penis looks smaller. No kidding; it's an optical illusion.

Problem 16: If I have serious heart trouble -- a heart attack or cardiac-bypass surgery -- my sex life will be over.

Answer: Not so. It is not necessary to forgo sexual activity after a heart attack; most men can resume sex without any serious effects after such events.

Answer: Yes. Nicotine can constrict small blood vessels and has a dampening effect on a man's erectile ability immediate as well as long term.

Problem 19: Recreational drugs get me in the mood for sex, but they are dangerous.

Answer: Marijuana, cocaine, ecstasy, and amphetamines can increase sexual desire and lower inhibitions in the short run, but over time can cause impotence and other serious hazards to health.

Problem 20: I have arthritis. Will sex help?

Answer: It might. Many patients find relief for four to six hours after having an orgasm.

Answer: This is a common complaint among patients being treated for ulcers with certain drugs that have the side effect of blocking male hormone production.

Problem 23: Is a person who tests negative for AIDS a safe sex partner?

Answer: Absolutely not. A negative test for HIV antibody is no guarantee that an individual cannot transmit AIDS. There is a lag time of six months or longer after infection occurs before the blood test shows positive. Safe-sex clubs won't prevent AIDS.

Problem 24: Can an oral pill help impotence or erectile dysfunction?

Answer: Yes. Viagra (sildenafil citrate) has now been approved by the FDA for use in treating male impotence.

Problem 25: A vasectomy will cause hardening of the arteries, heart disease, or other diseases.

Answer: Not true. A study of 10,000 sterilized men conducted by the National Institutes of Health found no increased risk of developing any such disorders among the participants.

Problem 26: If I have prostate obstruction, I'm going to need prostate surgery.

Answer: Not true. Many medical and nonsurgical techniques developed in recent years may allow a man to avoid prostate surgery.

Problem 27: Sex before athletic competition will wreck me!

Problem 28: My urinary flow has decreased and it seems like I have to get up at night more to urinate. Is all of this part of just getting older?

Answer: Possibly. See chapter 12 and take the results of the two tests to your physician.

A Pocket Reference to Prostrate, Urologic, and Sexual Health