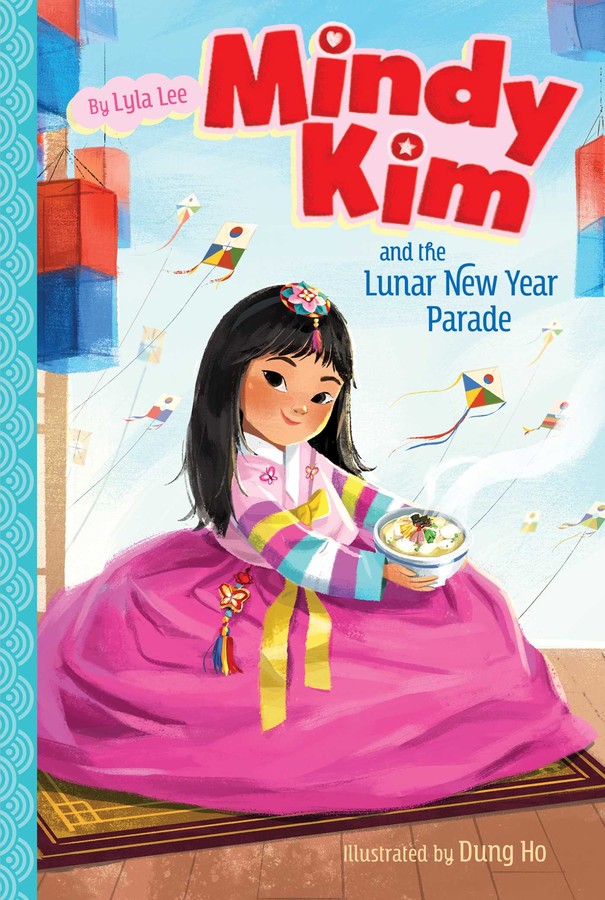 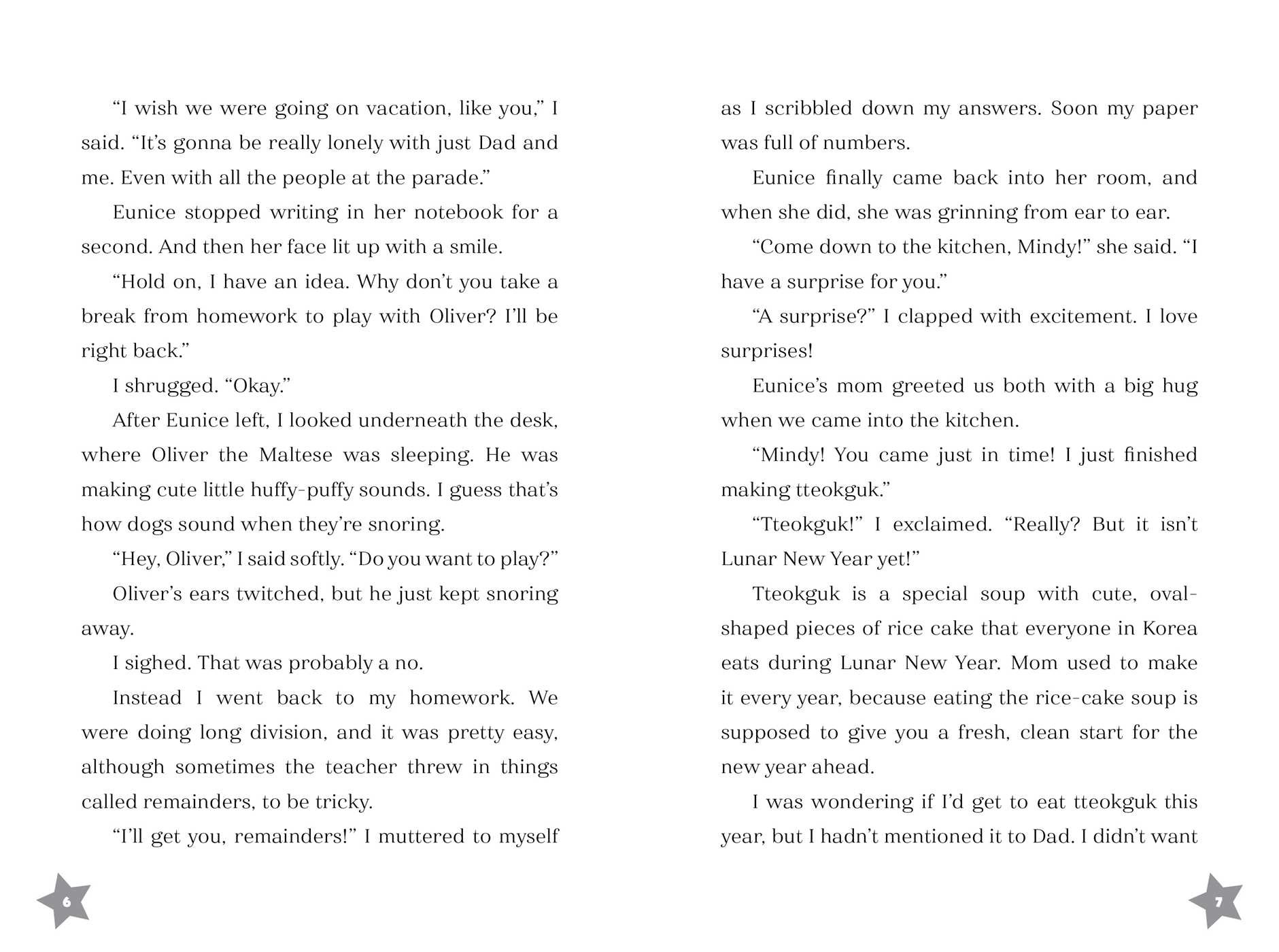 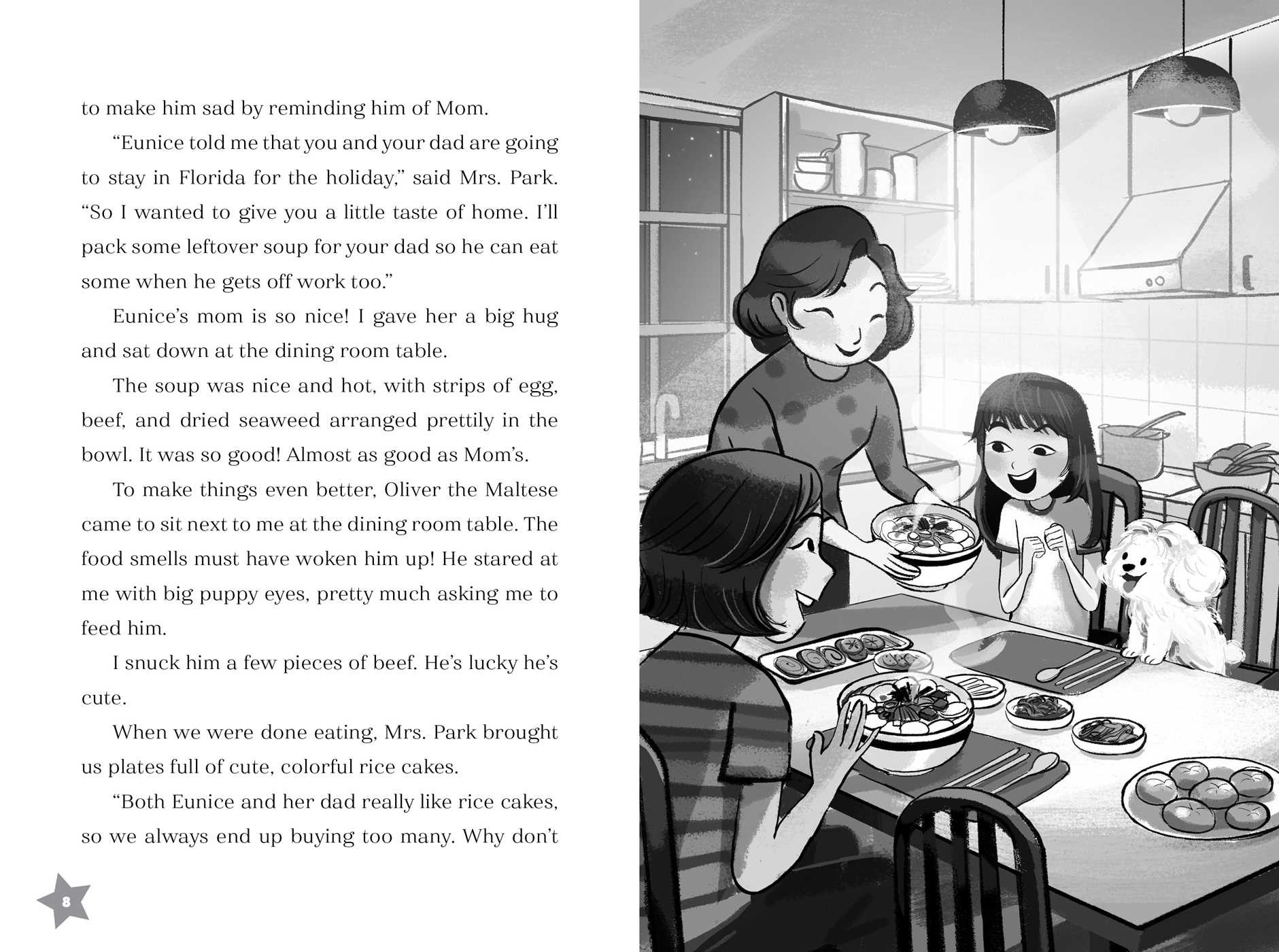 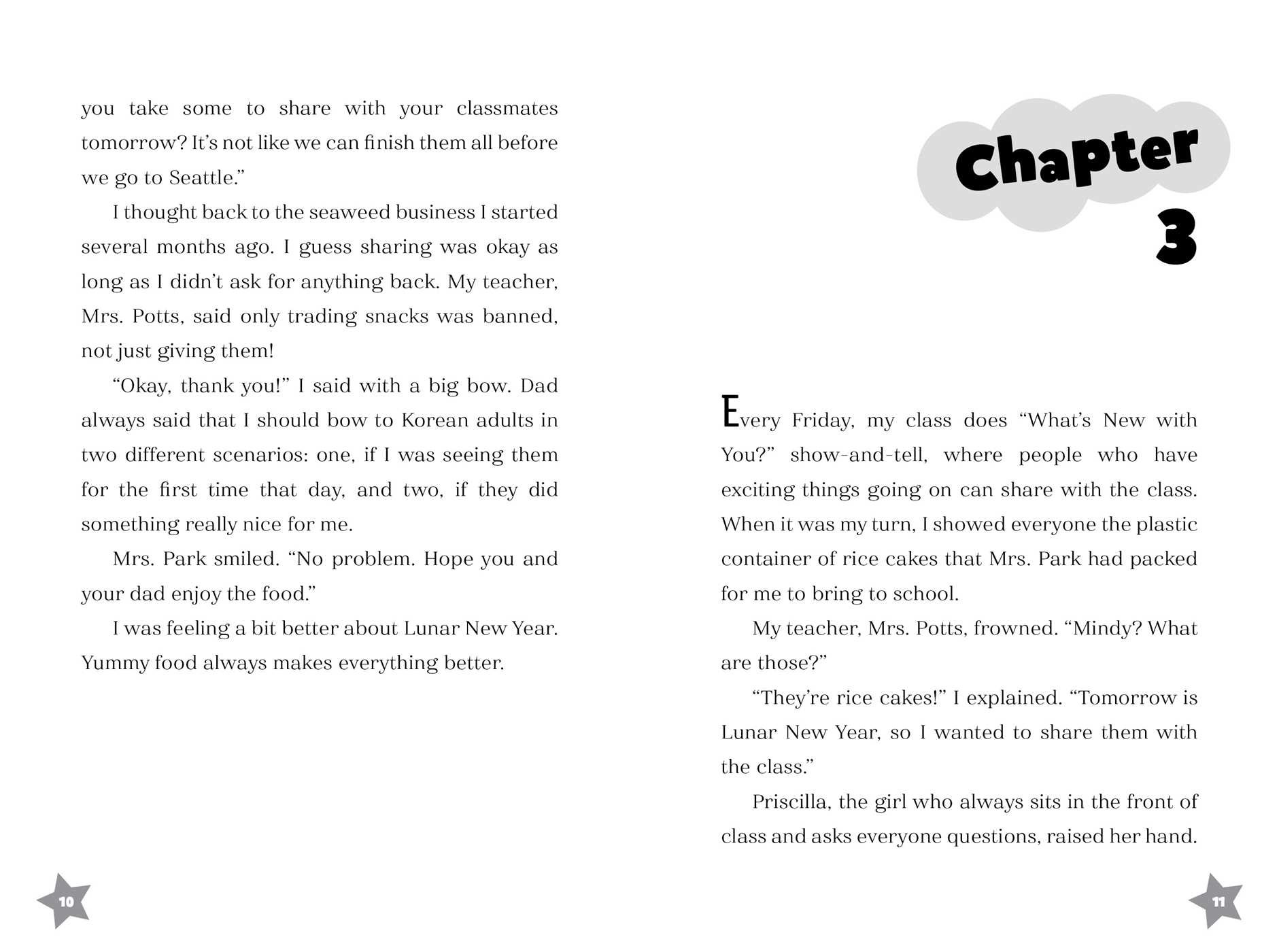 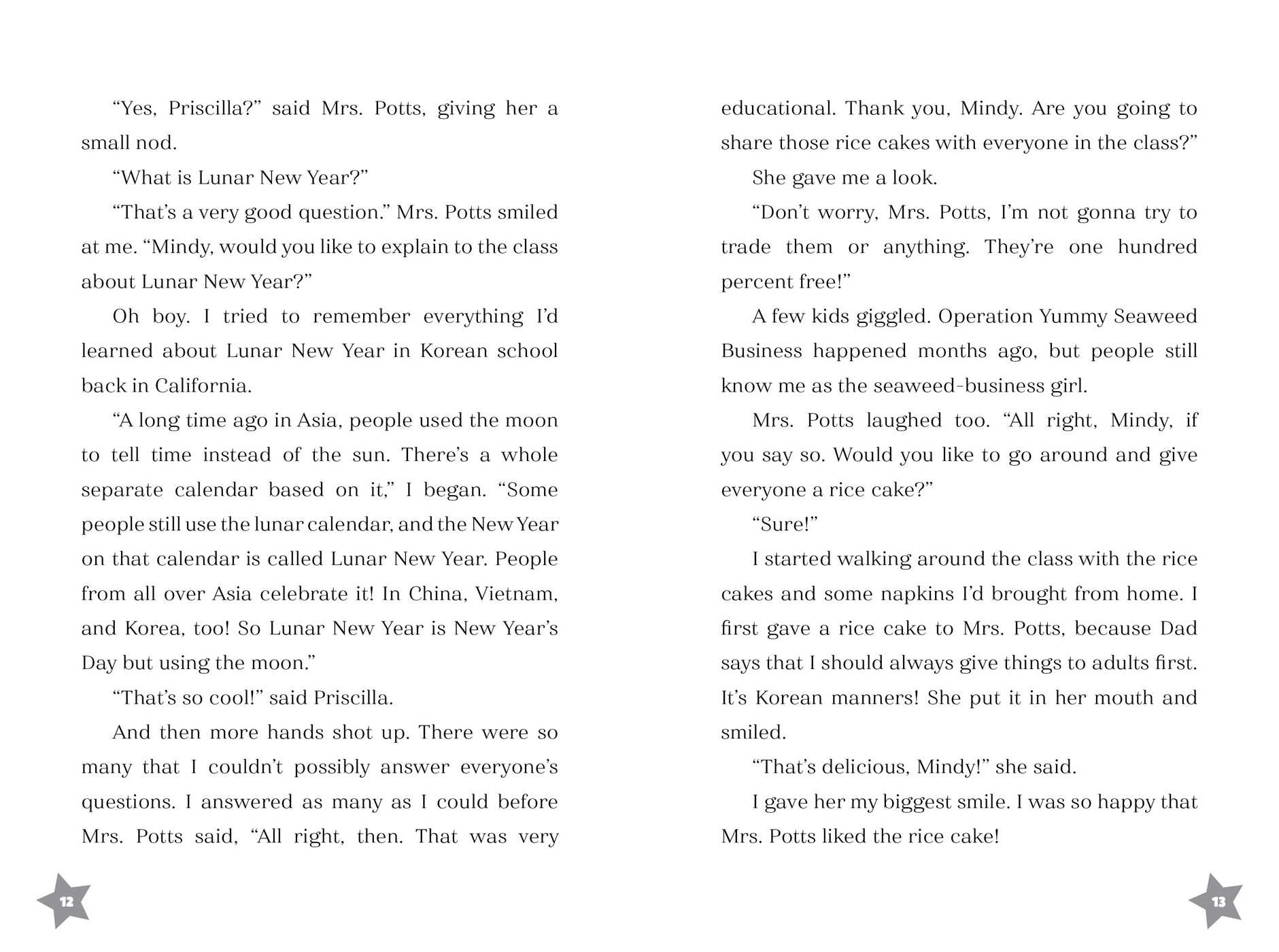 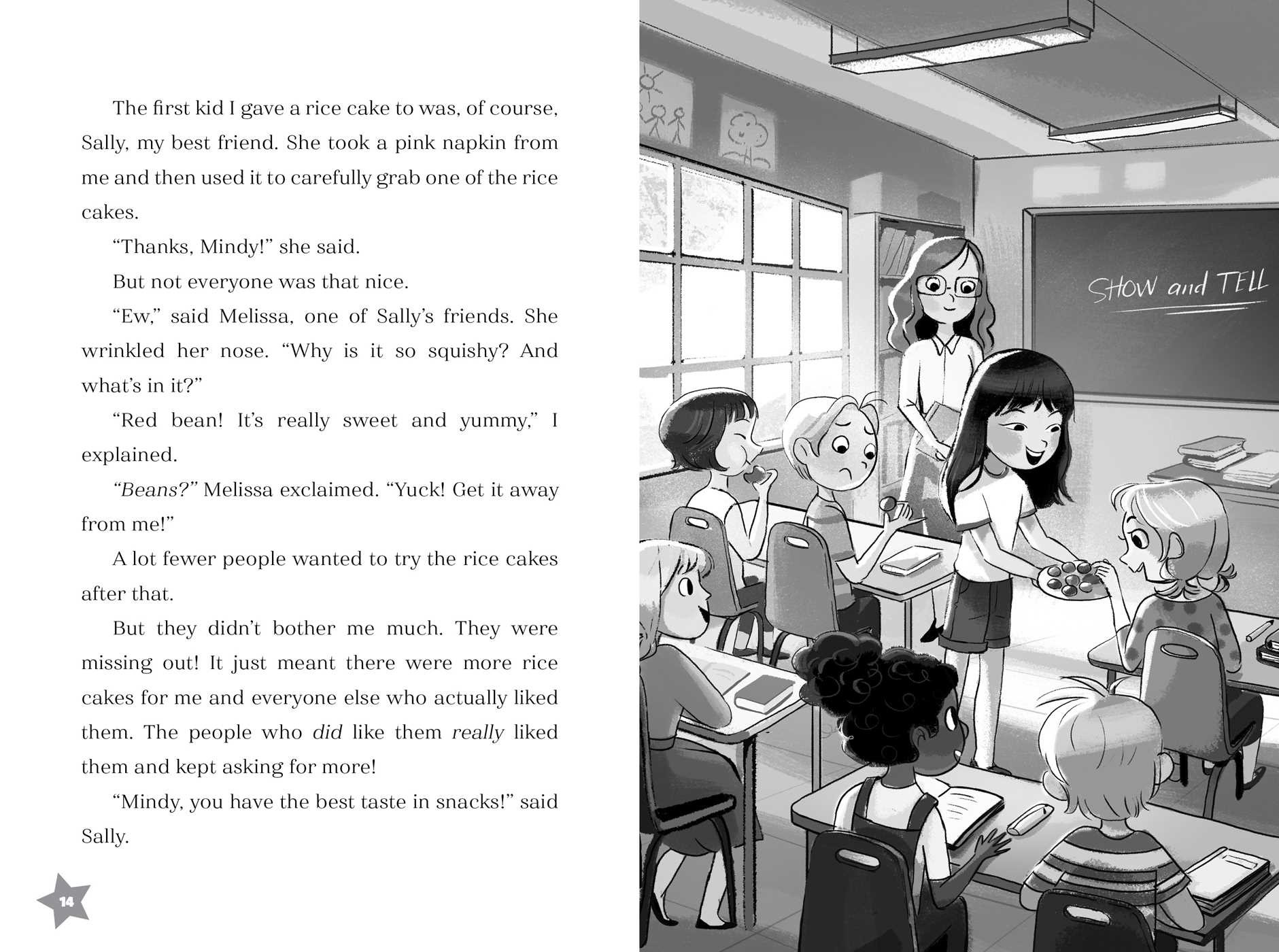 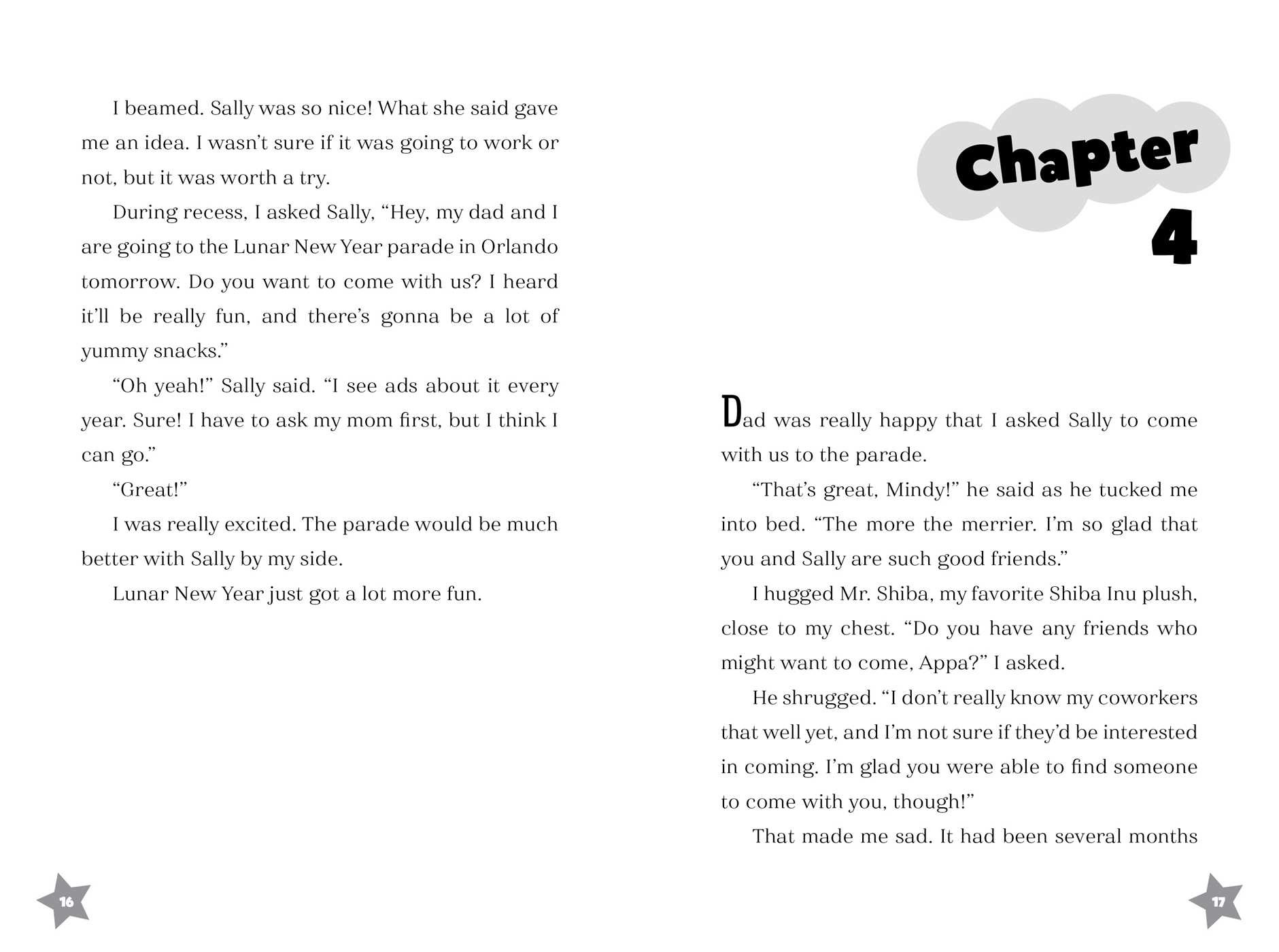 Fresh Off the Boat meets Junie B. Jones in this second novel in an adorable new chapter book series about Mindy Kim, a young Asian American girl who is getting ready to celebrate Lunar New Year!

Mindy is excited to celebrate the Lunar New Year! Even though it’s the first one without her mom, Mindy is determined to enjoy the day. She decides to make traditional Korean New Year food, a rice cake soup that’s her favorite. But things aren’t going quite to plan, and the celebration doesn’t feel the same as it did before.

With the help of her family and friends, can Mindy find a way to still enjoy her old holiday traditions, and create new ones along the way?

I’m almost eight years old, or at least, that’s how old I am in the United States. In Korea, though, I’m nine! That’s what Dad told me as he drove me to school.

“Korean people calculate age differently,” he said. “You’re already one year old when you’re born, and then you get one year older on New Year’s Day, instead of getting older on your birthday.”

I got really excited, since it’s been eight years since I was born. One plus eight is nine, and nine years old was definitely old enough to get a puppy. And even better yet, Lunar New Year was this Saturday!

“Does this mean that I’ll turn ten this weekend?” I asked, throwing my backpack in the back seat.

Dad laughed. “No, silly. People only age up on the first of January or on Lunar New Year, not both.”

I sat back into my seat with a big huff. “What’s the point of two New Years if you can only age up on one?”

Dad shook his head as he pulled into the school’s parking lot. “It’s an important part of our culture, Mindy. It goes way back to the times when our ancestors in Korea used the lunar calendar to tell time. Tell you what, why don’t we go to the Lunar New Year parade in Orlando this weekend? I saw an ad for it the other day. It looks like it’ll be fun!”

Dad smiled at me, but I was unconvinced. The last time Dad said something would be “fun,” I ended up watching a boring show about really slow slugs all by myself because he fell asleep in five minutes.

Plus, so much has changed since the last time we celebrated Lunar New Year. Last year, Dad, Mom, and I celebrated with the other Korean people in our neighborhood. We played really fun games like yutnori and jegichagi, ate so many yummy rice cakes, and even sang karaoke! There was no way that we could have as much fun this year as we did then.

Now the only other Korean family in our neighborhood is Eunice’s, and they were going to Seattle to visit their relatives for the holiday. It was just going to be me and Dad.

“The parade will be fun,” Dad said again. “It’ll be good for us to leave the house.”

I headed toward the school, my shoulders slumped. I was not looking forward to Lunar New Year. Not anymore.

Lyla Lee is the author of the Mindy Kim series as well as the upcoming YA novel, I’ll Be the One. Although she was born in a small town in South Korea, she’s since lived in various parts of the United States, including California, Florida, and Texas. Inspired by her English teacher, she started writing her own stories in fourth grade and finished her first novel at the age of fourteen. After working various jobs in Hollywood and studying psychology and cinematic arts at the University of Southern California, she now lives in Dallas, Texas. When she is not writing, she is teaching kids, petting cute dogs, and searching for the perfect bowl of shaved ice. You can visit her online at LylaLeeBooks.com.

Dung Ho was born and raised in Hue, Vietnam, where she studied graphic design at the Hue University College of Arts. After graduating, she worked in the design and advertising industries before discovering a great passion for illustration and picture books and becoming a freelance illustrator. Currently, she lives and works in Ho Chi Minh, Vietnam. Ho draws inspiration from nature and the interaction between people and nature and especially loves to draw children. When not drawing, she enjoys cooking and watching movies.